Comments (1)
Add to wishlistDelete from wishlist
Cite this document
Summary
The bone of contention between empiricism and rationalism occurs within epistemology that is involved in the limits of knowledge, studying nature and sources. To this end, Kant’s contribution between empiricism and rationalism entails the application of the limits, powers of…
Download full paperFile format: .doc, available for editing
HIDE THIS PAPERGRAB THE BEST PAPER95.5% of users find it useful 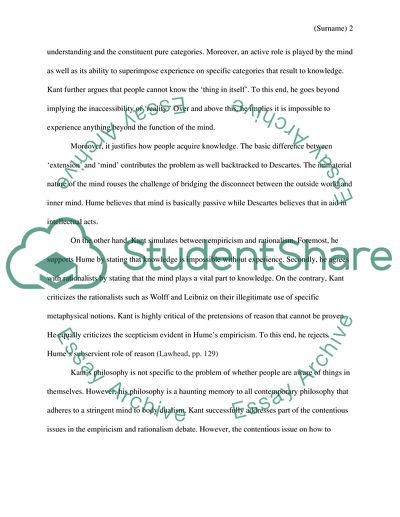 Does Kant adequately solve the problems evident in the controversy between empiricism and rationalism? The bone of contention between empiricism and rationalism occurs within epistemology that is involved in the limits of knowledge, studying nature and sources. To this end, Kant’s contribution between empiricism and rationalism entails the application of the limits, powers of reason as well as his famous critiques of reason and judgment. Consequently, he offers a synthesis of empiricism and rationalism while disputing the idea that knowledge of the true world is discovered by way of reason or inferred from experience.
Kant believed that despite empiricists and rationalists following different paths, they all arrived at a similar sceptical dead end. Evidently, the rationalists had disregarded perception as utter confused thinking that consequently rendered their theories as mere speculation, impossible of verification or refute. On the other hand, empiricist who theorized that people have access to the actual world in perceptive sense, believed that what people perceive are ideas that manifest in persons through things outside of them. For example, ideas are manifestations of impressions. Consequently, individuals only know their own ideas (Lawhead, pp. 123)
According to Kant, he believes that people have access only to appearances. This does not imply access to illusory appearances. However, Kant believes that appearances provide people with the foundation of knowledge. Moreover, the mind contributes to experience due to understanding and the constituent pure categories. Moreover, an active role is played by the mind as well as its ability to superimpose experience on specific categories that result to knowledge. Kant further argues that people cannot know the ‘thing in itself’. To this end, he goes beyond implying the inaccessibility of ‘reality.’ Over and above this, he implies it is impossible to experience anything beyond the function of the mind.
Moreover, it justifies how people acquire knowledge. The basic difference between ‘extension’ and ‘mind’ contributes the problem as well backtracked to Descartes. The immaterial nature of the mind rouses the challenge of bridging the disconnect between the outside world and inner mind. Hume believes that mind is basically passive while Descartes believes that in aid in intellectual acts.
On the other hand, Kant simulates between empiricism and rationalism. Foremost, he supports Hume by stating that knowledge is impossible without experience. Secondly, he agrees with rationalists by stating that the mind plays a vital part to knowledge. On the contrary, Kant criticizes the rationalists such as Wolff and Leibniz on their illegitimate use of specific metaphysical notions. Kant is highly critical of the pretensions of reason that cannot be proven. He equally criticizes the scepticism evident in Hume’s empiricism. To this end, he rejects Hume’s subservient role of reason (Lawhead, pp. 129)
Kant’s philosophy is not specific to the problem of whether people are aware of things in themselves. However, his philosophy is a haunting memory to all contemporary philosophy that adheres to a stringent mind to body dualism. Kant successfully addresses part of the contentious issues in the empiricism and rationalism debate. However, the contentious issue on how to restore the mind and its immediate and direct connection to the world is not sufficiently addressed up to the point of Husserl’s phenomenology.
Works cited
Lawhead, W.F. The Philosophical Journey: An Interactive Approach, Fifth Edition. New York, NY: McGraw-Hill, 2011 Read More
Share:
Tags
Cite this document
(“Kant Essay Example | Topics and Well Written Essays - 500 words - 1”, n.d.)
Kant Essay Example | Topics and Well Written Essays - 500 words - 1. Retrieved from https://studentshare.org/miscellaneous/1615702-kant

an
ankundingtre added comment 6 months ago
Student rated this paper as
Useful paper! Used it to finish an assignment for a miscellaneous course. It was easy as ABC, for the first time in my life.

CHECK THESE SAMPLES OF Kant

Kant and the Simpson

...? Inserts His/her Inserts Inserts Grade Inserts Here (Day, Month, Year) Kant and the Simpsons Assurance to the act of responsibility is discussed in this article as moral goodness .It is discussed that the Simpsons can be better role models for kids than harry potter to make them realize their duties. Duty indicates two opposing sides one is our desires and the other is our goals. The fulfillment of our desires is easier than the fulfillment of our goals. The Simpsons often emphasize the clash among the goals and wishes. A lot of episodes tell us that the Simpsons are better. In “dumbbell indemnity”, Homer is shown to have the ability to rationalize his desires while consulting moral duties. He is asked by his friend Moe...
4 Pages(1000 words)Essay

...Lecturer’s According to Kant, human beings and all other creatures that are rational tend to not only have ends but also have intrinsic value. Because of this, he states that it is not moral for human beings to use each other as means for their own ends. Kant further states that the principle of humanity and any creature that is rational as an end in itself are not borrowed from experience, moreover it is clear that all those rational beings are members of a universal kingdom of ends. In addition, these laws are not only made by these beings, but these beings are also subject to the laws, which have been made. Every rational or human nature is based on the autonomy of the beings, which is practiced by...
6 Pages(1500 words)Essay

...For Emmanuel Kant, knowledge (and thus reality) is constructed by the mind, not passively derived through the senses; in other words, the mind shapesthe world. One of Kant's works, the Critique of Pure Reason, is an attempt to answer the problems of the nature of knowledge-what it is and how it is obtained. Kant looks at the relationship between a priori knowledge, or knowledge based on reason alone, and a posteriori knowledge, or knowledge gained from the world. ("Critique of Pure Reason", 2006) According to Kant, we have a priori intuitions and concepts; that is, we have innate, logical knowledge, and this knowledge enables us to grasp a posteriori knowledge, to...
2 Pages(500 words)Essay

...Kant, Goethe and Schiller supported the concept of idealism. A generation later, Hegel re-inforced the same precepts, building his doctrine from the idealist premise that the ultimate reality of the universe “lay in spirit or idea rather than in the data of sense perception” (Hughes & Hofmann, 183). This conviction differentiated the German philosophic tradition distinctively from the European norm. In the prevailing Anglo-French tradition, the importance of sense perceptions and the validity of empirical procedures were considered to be key to the dynamics of society; thus resulting in utilitarianism, positivism, democracy and natural science. In Germany, it was completely different, hence Germany separated from the...
4 Pages(1000 words)Assignment

The Demands of Alcohol on the Economic Aspect

...Kant: The Categorical Imperative. I work as a member of a team of four at a commercial organization. We are good friends and spend a lot of time together. However, there is an underlying element of competition in our relationship, which we choose to ignore. We are all aware that the Manager is considering offering a promotion to one of us. It is evident that we are all being evaluated before a decision is taken, and my friend Tom and I are the most likely candidates for the promotion. In these circumstances, I accidently come across a memo on the Manager’s table. It instructs all employees to put in three hours of work on Saturday, in order to cater to the expected flood of holiday shoppers. The memo has obviously been...
1 Pages(250 words)Essay

..., who were found to be mentally retarded. (Atkins v. Virginia, 2002). Kant’s Position Concerning the Death Penalty I believe that Kant would most definitely have agreed with the death penalty. My reasoning is based on the thinking that Kant was of the opinion that if the offender committed murder that he must die because there was no possible substitute that could satisfy justice. Put another way, “there is no parallel between death and even the most miserable life. There is no equality of crime and retribution unless the perpetrator is judicially put to death.” (Pojman, 1998, p. 29) The example that is given by Kant is that if a society lived on an island and...
3 Pages(750 words)Research Paper

...Kant Theory Kant Theory History The theory of Categorical Imperative that has been forwarded by Kant was an outcome of his initial education. His initial education comprised of teaching of pietism but he was against the teachings. The only teachings he accepted from his early education was the teaching of morality which are quite clearly evident in his philosophical thinking. Furthermore, Pojman states that Kant was a believer and promoter of rational beings and did not accepted empiricism and that is why he believed that morality is a kind of knowledge and not based an individual’s needs (Pojman 122). Motivation Kant belonged to a family background...
2 Pages(500 words)Assignment

...﻿Kant Philosophy Although goodwill and inclinations are synonymous, Kant’s philosophy specifies that they characterize some differences in human behavior. Goodwill is good, without any qualification, but inclinations may have contrary motives. The goodness of a person’s will is the greatest of all motivations because it presents no ulterior motives. In contrast, inclinations and obligations define the role and responsibility that one has towards the society and their friends. A person is only morally good if they have goodwill. Moral obligations and goodwill are not necessarily connected. Obligations and inclinations arise from duty. Consoling a grieving friend arises from duty, which is part of moral...
1 Pages(250 words)Essay
sponsored ads
Save Your Time for More Important Things
Let us write or edit the essay on your topic "Kant" with a personal 20% discount.
GRAB THE BEST PAPER

Let us find you another Essay on topic Kant for FREE!