Comments (0)
Add to wishlistDelete from wishlist
Cite this document
Summary
The content of the speech was based on themes of education, economics, and general development. The context and content related in a significant sense of harmony.
The speaker relied on…
Download full paperFile format: .doc, available for editing
HIDE THIS PAPERGRAB THE BEST PAPER91.4% of users find it useful 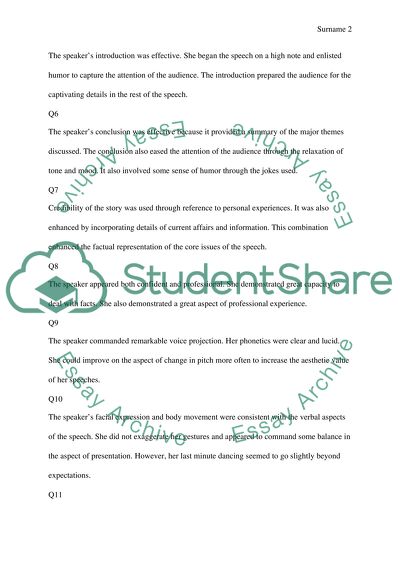 Ellen’s Analysis Speech Q1 The speech sounded and looked well researched because it focused primarily on current issues. The content of the speech was based on themes of education, economics, and general development. The context and content related in a significant sense of harmony.
Q2
The speaker relied on the evidence of personal stories to enrich the speech (Ellen at Tulane Commencement 2009). She gave the example of her experiences, expectations, and challenges to illustrate their impact on her development. The effect of these experiences manifested in the attention and interest of the audience.
Q3
The speech was well organized because it began on a light note with humor and proceeded to more serious sections of illustrations and facts before it ended with jokes and humor. The impact of this style enhanced the aesthetics of the speech. It also contributed to the aspect of memorability.
Q4
The transitions were evident in the course of the speech. They were mainly noted in the rising and falling of pitch in different parts of the speech. Parts of humor were highlighted in a high pitch while factual parts were captured in a low and serious pitched voice. The effect was to capture and retain the attention of the audience.
Q5
The speaker’s introduction was effective. She began the speech on a high note and enlisted humor to capture the attention of the audience. The introduction prepared the audience for the captivating details in the rest of the speech.
Q6
The speaker’s conclusion was effective because it provided a summary of the major themes discussed. The conclusion also eased the attention of the audience through the relaxation of tone and mood. It also involved some sense of humor through the jokes used.
Q7
Credibility of the story was used through reference to personal experiences. It was also enhanced by incorporating details of current affairs and information. This combination enhanced the factual representation of the core issues of the speech.
Q8
The speaker appeared both confident and professional. She demonstrated great capacity to deal with facts. She also demonstrated a great aspect of professional experience.
Q9
The speaker commanded remarkable voice projection. Her phonetics were clear and lucid. She could improve on the aspect of change in pitch more often to increase the aesthetic value of her speeches.
Q10
The speaker’s facial expression and body movement were consistent with the verbal aspects of the speech. She did not exaggerate her gestures and appeared to command some balance in the aspect of presentation. However, her last minute dancing seemed to go slightly beyond expectations.
Q11
The speaker was effective in her facial expressions. She changed her facial expressions at different parts of the speech to demonstrate change of tone and mood. This strategy provides the means of adjusting the expectations and concentration of the audience.
Q12
The speaker was sufficiently effective in her vocal expressions. She was able to project her voice clearly in a manner that was consistent with the themes and seriousness of different parts of the speech. The speaker was also able to regulate the pitch of her voice to enliven her speech and address the challenge of monotony.
Q13
I would advise the speaker to practice more on the aspect of chronological organization of facts. I would also advise her on the strategies of connecting with the audience more effectively. I would also impress on her the need to incorporate a range of stylistic devices such as rhetoric to enhance the participation of the audience.
Q 14
I would advise the speaker to enhance her tonalities and modulation of voice. I would also advise her on the appropriate ways of using poses and conjunctions. This would help to enhance transitions in the course of the speech.
Works Cited
Ellen at Tulane Commencement 2009. You Tube. Web. 19 Feb 2013. http://www.youtube.com/watch?feature=player_embedded&v=0e8ToRVOtRo Read More
Share:
Tags
Cite this document
(“Ellen's analysis speech Essay Example | Topics and Well Written Essays - 500 words”, n.d.)
Ellen's analysis speech Essay Example | Topics and Well Written Essays - 500 words. Retrieved from https://studentshare.org/miscellaneous/1615546-ellens-analysis-speech

........... ..... 13 May Speech Analysis Assigned Peer, Mike Schroeder, delivered a persuasive speech“Why stem cells should be used” to an uninformed audience. The goal of the speech was to influence the attitude and beliefs of the audience relating the ethical aspects of using stem cells in medical practice. The topic and the information, given by the speaker, was important for clarification of some ethical issues, which inhibit implementing the achievements of scientific researches of stem cells in medical facilities, regardless of the potential of stem cell therapy to struggle against the most dangerous human diseases. Opening. Realizing the primacy effect of the...
5 Pages(1250 words)Speech or Presentation

...? Comparative Speech Analysis The two speakers who would be compared in the following paper are HillaryClinton and Barack Obama. Both the speakers have a distinct style of speaking and due to their position in the current politics of the U.S., both the speakers have given a number of speeches at a number of different events. Hillary Clinton gave a speech in 2008 at Democratic National Convention and her style of speech would be analyzed on the basis of that speech. This speech was chosen to be analyzed because it is persuasive in nature. A persuasive speech requires comprehensive detail because the...
3 Pages(750 words)Essay

...which materialized in 1998, when Atlanta Federal District Court ruled that King’s “I Have a Dream” speech is part of national history and that CBS need not seek permission to air it which included a segment on the civil rights movement. This set the precedence for the speech to be used without permission because the speech was deemed to be part of the country’s history and in particular, the civil rights movement (Duffy 184). Martin Luther King Jr.’s “I Have a Dream” speech was also highly regarded not only for the cause it advocated, but also for the substance, the way it was written and the manner it was delivered that students until today are required...
6 Pages(1500 words)Research Paper

...Full topic and Section # of Speech Anxiety As my was called, my heart began pumping blood into my ears and my head was so numb I couldn't even feel if I had legs or not. Speaking in front of my class was the least of my worries at that point. My first concern was how should I get up to go to the stage Because my brain wasn't in a situation to give my body any commands. Does this situation strike a bell I sure it does. Although it sounds like the sky is going to fall to your head and you will be reduced to mere dust, the problem isn't so big. You have got a bad case of stage fright, or speech anxiety in scientific terms. This situation presents into our life whenever we are going to speak to an unknown group of people and whom... these...
6 Pages(1500 words)Essay

..., that there is a wide gap between the living standards of people from developing and developed nations, that good education can help poor children overcome their predicament and that one could sponsor a child by contributing just $28 per month, which would cover the child's educational and health needs. The speaker makes use of various supporting materials like the brochure of Compassion International which gives the statistics, the Hunger Project website, a report on Compassion conducted by the Better Business Bureau and Smart Money magazine. The speech is concluded with a touch of humor where the speaker refers to the need of opening the hearts and checkbooks of the audiences in order to help poor children....
2 Pages(500 words)Article

...what they should do Elisa has shared that she and her partner are having a child together. Her partner Ellen would benefit from partner benefits so that they can insure they will have a healthy baby. Elisa has quietly asked her boss to consider extending her health benefits to her spouse and this is still in negotiation. The Problem Elisa and Ellen have been together for seven years. They are committed same sex partners and they have a home together. They were "married" after five years and they have lived as any heterosexual couple would live. They understand that there are no laws that protect them but Ellen works only part-time because she is also going to school to gain her...
7 Pages(1750 words)Essay

...Speech Analysis Speech The Speech selected for analysis in this paper is the famous speech delivered by Martin LutherKing Jr., “I have a dream”, on 28th August 1963. This speech is particularly of great significance as it addressed the need for the prevalence of racial equality. Venue The speech was delivered at Lincoln Avenue near the Washington Monument and was attended by more than 200,000 people in person. Speaker The speaker of this historic speech is one of the most notable and respected leaders of the American Civil Rights Movement, Martin Luther King Junior. He was an activist and followed the principles of Mahatma Gandhi and thus believed in tolerance, patience, dialogue and nonviolence. Analysis of the Speech This speech... was...
2 Pages(500 words)Essay

...Campaign Speech Analysis CAMPAIGN SPEECH ANALYSIS Mitt Romney, the GOP candi in this year’s election gave his acceptance speech on 30th August 2012, during the final day of the GOP national Convention in Tampa. Featured speeches included speeches from movie alumni Clint Eastwood, Florida Senator Marco Rubio, and the former Florida Governor Jeb Bush. Senator Marco Rubio introduced mitt Romney. Mitt Romney gave his speech at 10:33 P.M, as the last installment of the speeches. This paper seeks to present an analysis of the speech given by Mitt Romney during...
2 Pages(500 words)Essay

...The Ellen Degeneres Show The Ellen Degeneres Show is a daytime television show arrangement offering humorist Ellen Degeneres as she engrosses gatherings of people with her eccentric brand of diversion, her positive approach, and her enthusiasm for dance. Every scene characteristics Ellen talking with different famous people like on-screen character Julia Roberts, artists like Rihanna, and political leaders like Barrack Obama. Adding to the fight are sections about standard individuals doing unprecedented things, and different recreations that oblige group of onlookers investment. Amidst occasions, she and the group of onlookers move to the music played by D.J. Tony...
2 Pages(500 words)Research Paper

The literary analysis of two works by George Saunders

.... And this was the intention of the author to offer a parabolic redox for the account of the bible to hand the eldest brother the card and term them as prodigals. This time the prodigal did not go anywhere. Neil doomed to envision the greatness to practice speech in their head, cannot escape the vision for himself than he can elude the love which weakens Neil, saps him out from his dream life. What makes the Pastoralia and Winky an interesting story is the mode in which it was developed to come up with two competing loci for the reader’s contempt. In the story of Winky, Tom Rodgers continues to explain how he overcame the problem of Rodgers brother on Ellen. Reading the two stories helps one gain that...
5 Pages(1250 words)Book Report/Review
sponsored ads
Save Your Time for More Important Things
Let us write or edit the essay on your topic "Ellen's analysis speech" with a personal 20% discount.
GRAB THE BEST PAPER

Let us find you another Essay on topic Ellen's analysis speech for FREE!