Comments (0)
Add to wishlistDelete from wishlist
Cite this document
Summary
“The Judicial Notice Rule prescribes that well-known facts need not be proven, but rather, they are recognized by the court as fact” (Pozgar, 2012 p.120). For example, x-rays as a diagnostic tool to identify fractures is a matter of common knowledge, even without certified…
Download full paperFile format: .doc, available for editing
HIDE THIS PAPERGRAB THE BEST PAPER92.3% of users find it useful 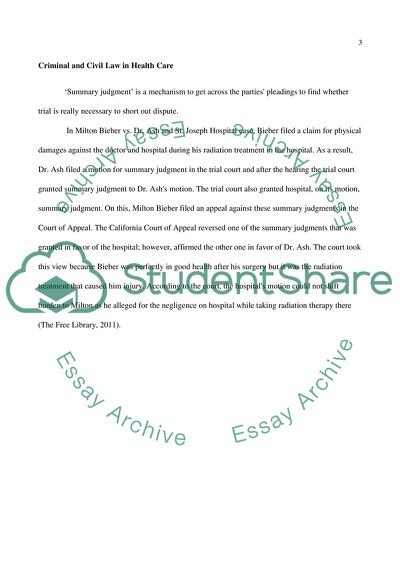 Extract of sample "CRIMINAL AND CIVIL LAW IN HEALTH CARE"

Criminal and Civil Law in Health Care Several kinds of civil procedures are employed in healthcare law and Judicial Notice Rule is oneof them.
Judicial Notice Rule in Healthcare Civil Case
“The Judicial Notice Rule prescribes that well-known facts need not be proven, but rather, they are recognized by the court as fact” (Pozgar, 2012 p.120). For example, x-rays as a diagnostic tool to identify fractures is a matter of common knowledge, even without certified by the expert, and the court can take judicial notice to it.
In the case of Arthur versus St. Peters Hospital similar situation occurred. Arthur was admitted to the hospital when he got his left wrist injured. In the hospital, his X-rays were ordered to identify his injuries; however, he was later released on the plea that no fractures were noticed. Due to continued swelling and pain, Arthur consulted another physician who finally diagnosed a fracture. Based on this, Arthur sued the hospital for negligence. The hospital requested the court to deliver summary judgment on the plea that physicians who treated Arthur were not employees of the hospital but they were working in the independent capacity as contractors.
All reports, bills, x-rays and other documents provided to the Arthur carried the logo of the hospital and in no way, Arthur was informed that physicians with whom he was taking treatment were working as independent contractors in the Hospital. The court took judicial notice of the available common facts and took a stand that it was obvious on part of the patient/plaintiff to believe that all physicians were employees of the hospital while taking any treatment there.
Summary Judgment in Healthcare Civil Cases
‘Summary judgment’ is a mechanism to get across the parties pleadings to find whether trial is really necessary to short out dispute.
In Milton Bieber vs. Dr. Ash and St. Joseph Hospital case, Bieber filed a claim for physical damages against the doctor and hospital during his radiation treatment in the hospital. As a result, Dr. Ash filed a motion for summary judgment in the trial court and after the hearing the trial court granted summary judgment to Dr. Ashs motion. The trial court also granted hospital, on its motion, summary judgment. On this, Milton Bieber filed an appeal against these summary judgments in the Court of Appeal. The California Court of Appeal reversed one of the summary judgments that was granted in favor of the hospital; however, affirmed the other one in favor of Dr. Ash. The court took this view because Bieber was perfectly in good health after his surgery but it was the radiation treatment that caused him injury. According to the court, the hospitals motion could not shift burden to Milton as he alleged for the negligence on hospital while taking radiation therapy there (The Free Library, 2011).

CHECK THESE SAMPLES OF CRIMINAL AND CIVIL LAW IN HEALTH CARE

Justine could either claim under “like work,” “work rated as equivalent,” or “work of equal value.” A claim under the “like work” provision of the Equal Pay Act 1970 is laid down in s 1(2...
9 Pages(2250 words)Case Study
sponsored ads
Save Your Time for More Important Things
Let us write or edit the essay on your topic "CRIMINAL AND CIVIL LAW IN HEALTH CARE" with a personal 20% discount.
GRAB THE BEST PAPER

Let us find you another Essay on topic CRIMINAL AND CIVIL LAW IN HEALTH CARE for FREE!