Comments (0)
Add to wishlistDelete from wishlist
Cite this document
Summary
The structure of pressure bulkhead for installation on an aircraft’s landing gear includes a web of bulkheads and a supporting structure to ensure stability. The bulkhead web is made of one part in front of the pressurized part and a second part directly opposite the initial…
Download full paperFile format: .doc, available for editing
HIDE THIS PAPERGRAB THE BEST PAPER91.1% of users find it useful 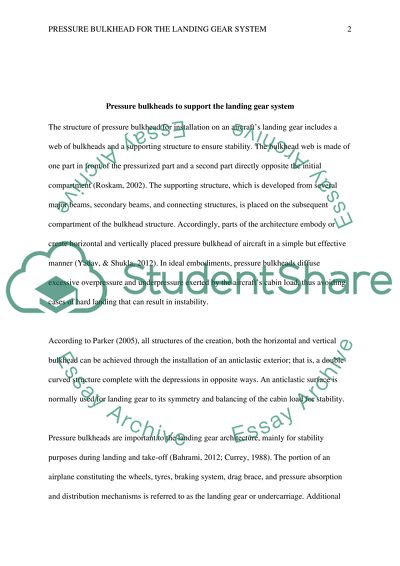 Pressure Bulkhead for the Landing Gear System Number Pressure bulkheads to support the landing gear system
The structure of pressure bulkhead for installation on an aircraft’s landing gear includes a web of bulkheads and a supporting structure to ensure stability. The bulkhead web is made of one part in front of the pressurized part and a second part directly opposite the initial compartment (Roskam, 2002). The supporting structure, which is developed from several major beams, secondary beams, and connecting structures, is placed on the subsequent compartment of the bulkhead structure. Accordingly, parts of the architecture embody or create horizontal and vertically placed pressure bulkhead of aircraft in a simple but effective manner (Yadav, & Shukla, 2012). In ideal embodiments, pressure bulkheads diffuse excessive overpressure and underpressure exerted by the aircraft’s cabin load, thus avoiding cases of hard landing that can result in instability.
According to Parker (2005), all structures of the creation, both the horizontal and vertical bulkhead can be achieved through the installation of an anticlastic exterior; that is, a double-curved structure complete with the depressions in opposite ways. An anticlastic surface is normally used for landing gear to its symmetry and balancing of the cabin load for stability.
Pressure bulkheads are important to the landing gear architecture, mainly for stability purposes during landing and take-off (Bahrami, 2012; Currey, 1988). The portion of an airplane constituting the wheels, tyres, braking system, drag brace, and pressure absorption and distribution mechanisms is referred to as the landing gear or undercarriage. Additional parts connected to and working in tandem with the undercarriage may encompass retracting mechanisms, door panels, steering devices, and shimmy dampers (Canaday, 2012).
Central gear
Centrally-placed landing gear provides symmetric support to the aircraft, and ensures its uniform movement on the ground (Canaday, 2012). It also serves as the main proportionate means of diffusing any accumulations of energy created in the changeover from flight to landing roll, thus prevents the aircraft from landing by its side (Wright, & Cooper, 2008). Mair and Birdsall (1996) aver that the brakes, usually connected to the main wheels, came handy when the forward movement of the aircraft needs retarding: in light of this, a centrally placed gear provides stability in the navigation of the aircraft during retracting.
According to Currey (1988), the popular structure of modern aircraft landing gear come in the form of a tricycle, with the primary gear fixed aft of a front nose gear, and at the centre of gravity. The nose gear carries one-fifth of the aircraft’s static weight (Bahrami, 2012). The central position of the landing gear, especially for large aircraft with immense cabin load is supported by multiple-wheeled bogies to reinforce the enormous weight and, in some cases, ensure soft terrain for takeoff and landing purposes.
Generally, pressure bulkhead is important to the structure and function of an aircraft’s landing gear, since it helps to disperse any pressures and energy build-up during take-off and landing. The central positioning of the gear respects the gravitational force, thus provides stability and proportionality to the cabin load, and prevents cases of the aircraft falling by its side during landing. The undercarriage serves the transitional function of ensuring that an airborne craft touches the ground, and takes off with insignificant or no challenge to critical stability.
References
Bahrami, A. 2012. Airworthiness Directives; Airbus Airplanes. Federal Register, 77(174), pp.55163-55166.
Canaday, H. 2012. Landing Gear MRO Prospects. Aviation Week & Space Technology, 174(47), p.131.
Currey, N.S. 1988. Aircraft Landing Gear Design: Principles and Practices. New York: AIAA.
Mair, W.A., & Birdsall, D.L. 1996. Aircraft Maintenance. Cambridge: Cambridge University Press.
Parker, P.M. 2005. 2006-2011 World Outlook for Landing Gear for Military Aircraft. World Outlook Report 2006-2011: Landing Gear for Military Aircraft, pp.1-187.
Roskam, J. 2002. Airplane Design: Determination of Stability, Control & Performance Characteristics : Far and Military Requirements. New York: DARcorporation.
Wright, J.R., & Cooper, J.E. 2008. Introduction to Aircraft Aeroelasticity and Loads. New York: John Wiley & Sons.
Yadav, D. K., & Shukla, S.K. 2012. Analytical Model for Deflection of the Runway Pavement at Touchdown Point Caused by an Aircraft during Landing. International Journal of Geomechanics, 12(2), pp.113-118. Read More
Share:
Tags
Cite this document
(“Pressure bulkhead to support the landing gear system Research Paper”, n.d.)
Retrieved from https://studentshare.org/miscellaneous/1614847-pressure-bulkhead-to-support-the-landing-gear-system

...?AIRCRAFT LANDING GEAR SYSTEM Part I a) Fig ARIC 429 Hardware (Helfrick 322) As can be seen from Fig the external components of ARINC 429 Data Bus are: the standard line receiver, and; standard line driver. The transmitter or line driver sends messages and receivers accept them. It can have 20 receivers at the most, with a 12 k resistance. b) ARINC 429 Databus Features Operational Specifications Simplex, broadcast bus connected in Star or Bus Drop configurations Transmission rate: low speed (12.5 to 14.5 kHz) and high speed (100 kHz) +/-1% Receiver is not allowed to respond in the same bus where a transmission has occurred LRU does not have an address but is programmed to listen for...
7 Pages(1750 words)Essay

...? AIRCRAFT LANDING GEAR SYSTEMS Introduction The aircraft is a heavier than air machine and making it land and take off is facilitated by what is termed a Landing Gear mechanism. The landing gear in most aircraft consists of a tricycle configuration. This has a landing wheel that retracts into the nose (forward fuselage) of the aircraft and a set of two wheels that normally retract into the wings of the aircraft.. The National advisory Committee for Aeronautics (NACA) by testing in a wind tunnel in 1927 came to the conclusion that the aircraft landing gear made a significant contribution to the drag of an airplane. The retractable landing gears thus became a priority. Landing Gear and Avionics Modern aircraft design incorporates... the...
8 Pages(2000 words)Essay

...? Full Paper Decision Support System Decision support systems abbreviated as DSS, were invented in 1970s. The primary function of a DSS is to facilitate management with informed decisions. However, the systems are not capable to take decisions themselves, it provides adequate information to the managers to react and take decisions based on that information. A typical DSS may “collect, store, process, and provide access to information to support managerial decision making. Decision support facilitate unstructured and one-off decision making, as the standard reporting capabilities of MIS s were perceived to be more suitable...
7 Pages(1750 words)Research Paper

...with another country helping to clean it up. The atmosphere is composed of 4 different layers: the stratosphere, mesosphere, troposphere and the thermosphere. The troposphere is the closest layer to the surface of the Earth, at approximately 50 km thickness; it makes up the biggest percentage of the atmosphere, 99.9 percent. It is the atmosphere part that determines climate, weather systems, and is basically the primary support for life on Earth. The composition of troposphere is mainly made up of particles , gases, and water vapor; all which are influenced by air pollution. On top of the troposphere is the stratosphere, which has the ozone layer, made up of oxygen and nitrogen. Gases with a long life,...
8 Pages(2000 words)Essay

THE GEARED SYSTEM AND THE GEAR BOX

...? Experiment 2: THE GEARED SYSTEM AND THE GEAR BOX. Introduction. This experimental set up is a rubric of a functional gear as applied in Physics and in other disciplines. It gives a reflection of how the gear system operates, how sizes and numbers of teeth in any given gear system relate, as well as, how the naming of the gear system is achieved. Theory has it that the larger the gear the less the revolution and the reverse are also true. But can this be explained experimentally? Questions that are of fundamental and the experiment seek answers to are:...
5 Pages(1250 words)Coursework

...?Business Support System Case Study One Virtual reality differs from augmented reality in that the latter applies to environment where computer simulation takes the central stage. This means that simulation can be sought to show presence in imaginary worlds. Augmented reality on the other hand deals with real life aspects that may be direct or even indirect and therefore the environment in this case is that of real a world. Augmented reality has got the appealing effect especially to marketers due to the fact that they are operating in the real world and hence they can develop new ways and methodology of doing things by embracing technology. Marketers are able to communicate to their target market by use...
3 Pages(750 words)Research Paper

The Solar System and Moon Landing

...? The Solar System and Moon Landing The Solar System and Moon Landing Introduction It is doubtless that the world is changing, and new things keep coming up. The same applies to the scientific knowledge and understanding that constantly keeps changing. Historical events and scientific discoveries are capable of changing people’s understanding of the natural world and scientific concepts. Scientific discoveries are based on studies, observation and experimentation, which dispels the early beliefs resulting into a new understanding (Bond, 2012). Theories of the solar system are some of the phenomena in science that has changed what we believed in over time...
3 Pages(750 words)Assignment

.... e. Press- this is a secondary actor that provides a supportive role to the system to achieve the goal of the primary actors. It provides leads that LSS can pick up. f. Schools- this secondary actor enables the LSS office actors (LSS Branch Office and LSS Head Office) to send out mail to the "Parent" actors. g. Shopping Mall- this secondary actor enables the LSS office actors to pick up leads through canvassing in its premises. h. Information system- this actor consists of the sales and stock module functions to enable it control those manage and control those functions. ii) Brief description of the use cases: a. Process Assessment 1. Receive request for assessment by phone or by...
11 Pages(2750 words)Assignment

...Transmission Automatic transmission are in such away that gears can be selected without having to receive any input from the drivers side. Gears are changed by an on-board computer in the car and the changes are triggered by the position of the brake, accelerator and vehicle speed (‘Automotive’ n.d.). Automatic transmission lack clutches which have been replaced with a torque converter. Main Parts The main components include; 1. Planetary Gear sets; they offer several forward gear ratios and the reverse gear when needed 2. Hydraulic System; makes use of a transmission fluid subjected under pressure to control both...
5 Pages(1250 words)Research Paper

.... Current flow was to the left, right and no current flow. The connections to the right and left set of terminals were insulated to ensure that the wires do not short circuit. Methods and results The voltage was supplied from a 3volt battery to the RE 140 motor which powered the 917 D gearbox. The gearbox provided six different gear ratios with the corresponding speed, revolutions per minute. The gears were tested with different weights to determine the weights they could take with the big and small sprockets. The results of the weights are shown below. Results Gear Big sprocket Mass supported (g) Small sprocket Mass supported...
5 Pages(1250 words)Essay
sponsored ads
Save Your Time for More Important Things
Let us write or edit the research paper on your topic "Pressure bulkhead to support the landing gear system" with a personal 20% discount.
GRAB THE BEST PAPER

Let us find you another Research Paper on topic Pressure bulkhead to support the landing gear system for FREE!