Comments (0)
Add to wishlistDelete from wishlist
Cite this document
Summary
In other words, the competing companies may have a secret agreement in order to dominate the market and establish prices that excess the competitive benchmark…
Download full paperFile format: .doc, available for editing
HIDE THIS PAPERGRAB THE BEST PAPER91.9% of users find it useful 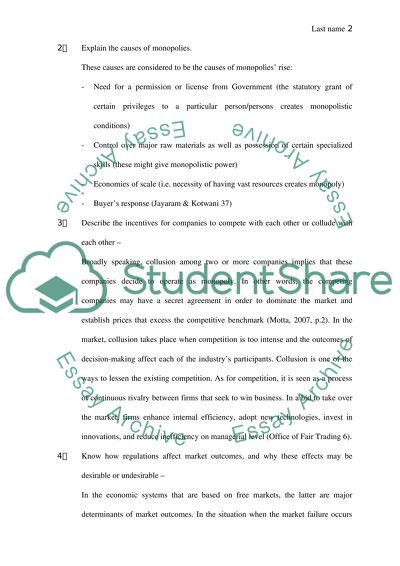 2． Explain the causes of monopolies.
These causes are considered to be the causes of monopolies’ rise:
Need for a permission or license from Government (the statutory grant of certain privileges to a particular person/persons creates monopolistic conditions)
Control over major raw materials as well as possession of certain specialized skills (these might give monopolistic power)
Economies of scale (i.e. necessity of having vast resources creates monopoly)
Buyer’s response (Jayaram & Kotwani 37)
3． Describe the incentives for companies to compete with each other or collude with each other –
Broadly speaking, collusion among two or more companies implies that these companies decide to operate as monopoly. In other words, the competing companies may have a secret agreement in order to dominate the market and establish prices that excess the competitive benchmark (Motta, 2007, p.2). In the market, collusion takes place when competition is too intense and the outcomes of decision-making affect each of the industry’s participants. Collusion is one of the ways to lessen the existing competition. As for competition, it is seen as a process of continuous rivalry between firms that seek to win business. In a bid to take over the market, firms enhance internal efficiency, adopt new technologies, invest in innovations, and reduce inefficiency on managerial level (Office of Fair Trading 6).
4． Know how regulations affect market outcomes, and why these effects may be desirable or undesirable –
In the economic systems that are based on free markets, the latter are major determinants of market outcomes. In the situation when the market failure occurs because of the fact that this market’s quality, price, or quantity do not meet established social welfare norms, economic regulation is used. Its major aim is to prevent market failure. It is desirable since it prevents the market failure (Jacobs & Rapoport 353).

5． Explain the differences between capture theory and public-interest theory
The major difference between capture theory and public interest theory is that the latter believes that regulation is inherently effective: it leads to the society getting better off. By contrast, capture theories assert that regulation works in the interest of a particular group which has succeeded in making its case to some regulatory agency or some legislative body (Hovenkamp 133)
6． -Know and be able to explain the 10 planks of the Communist Manifesto
In his Communist Manifesto, Karl Marx lists 10 steps needed to destroy the system of free enterprise and replace it with system of all-powerful governmental rule. This will bring in the communist state. These steps of 10 Planks of The Communist Manifesto are 1) abolition of private property and giving all land rents for public use; 2) a heavy progressive (or graduated) income tax; 3) abolition of rights of inheritance; 4) property confiscation from all rebels and emigrants; 5) centralization of credit in the state’s hands through national bank; 6) centralization all transportation and communications in the state’s hands; 7) factories’ extension; waste lands’ cultivation; 8) equal liability of all people to labor; 9) agriculture and manufacture combination, as well as equitable population distribution around the country; 10) free education in all public schools (Sims 194).
7． Summarize the key ideological positions in economic thought from mercantilism to the present. Know the general time-line and some of the key players.
The earliest position in the timeline of economic thought in Europe was mercantilism. It evolved in the 17th century. Its basic idea was that any state’s prosperity relied on its capital supply. In its turn, the capital was represented by some kind of value (gold, for example). Within mercantilism, high positive balance of trade had to be maintained. For this, the state used a variety of protectionist tools. Two most notable figures of the mercantilist policy in Europe were Philip von Hornick and Jean-Baptiste Colbert.
Economic nationalism developed in the 19th century. It was based on ideas of mercantilism, but focused more on domestic manufacture rather than colonies. Prominent figures: theorists Alexander Hamilton, Henry Clay, and Friedrich List.
Theories of the 20th century include linear-stages-of-growth model (W.W. Rostow; focus on rapid accumulation of capital), structural-change theory (changing economic structures of the developing states from subsistence agriculture to service economy and more industrialized mode of living) (W.Lewis and Hollois Chenery); international dependence theory (international capitalist system prevents developing countries from successful development; gained prominence in 1970s; neoclassical theory (since 1980s, emphasis on free markets and on government intervention) (Todaro & Smith, 2006).
Works Cited
Hovenkamp, Herbert. Enterprise and American Law, 1836-1937. Harvard University Press, 1991. Print.
Nightingale, Kate. Taxation: Theory and practice. 2002. Pearson Education.
Jayaram, R. & Kotwani, N. Industrial economics and telecommunication regulations, 2012, PHI Learning Pvt. Ltd, Print.
Jacobs, Philip & Rapoport, John. The economics of health and medical care, 2004. Jones & Bartlett Learning. Print.
Motta, Massimo. Cartels in the European Union: Economics, Law, Practice. European University Institute, Florence and Universita di Bologna. 17 September 2007. Web. 6 Feb 2013. < http://www.barcelonagse.eu/tmp/pdf/motta_cartelseulaw.pdf >.
Office of Fair Trading. Government in Markets. 2009. Web. 6 Feb 2013. < http://www.oft.gov.uk/shared_oft/business_leaflets/general/OFT1113.pdf >.
Sims, Francwa. The Anacostia diaries. Lulu.com, Print.
Todaro, Michael & Stephen Smith. Economic Development. 9th ed. Addison-Wesley, 2006. Print. Read More
Share:
Tags
Cite this document
(“Short answers about Introduction to Political Economy Essay - 3”, n.d.)
Short answers about Introduction to Political Economy Essay - 3. Retrieved from https://studentshare.org/miscellaneous/1614357-short-answers-about-introduction-to-political-economy

“Short Answers about Introduction to Political Economy Essay - 3”, n.d. https://studentshare.org/miscellaneous/1614357-short-answers-about-introduction-to-political-economy.
Comments (0)
Click to create a comment or rate a document

..., and controlling natural monopolies, especially in the electricity supply industries and the telecommunications sector. This benefits individual companies too, as regulation encourages fair competition in companies, while protecting the consumers. 5． Differences between capture theory and public-interest theory The idea of capture was developed by George Stigler and argues that, if industries capture their regulatory agencies, they can benefit from regulation. They can do this by making the regulatory agencies depend on their technology and political influence. On the other hand, public-interest theory applies in market failures, when markets fail to regulate themselves, forcing the government to step in because of 6．...
2 Pages(500 words)Essay