Comments (0)
Add to wishlistDelete from wishlist
Cite this document
Summary
However, I think that progressive income taxes are a good think because those who make less cannot afford to pay a high income tax rate…
Download full paperFile format: .doc, available for editing
HIDE THIS PAPERGRAB THE BEST PAPER99% of users find it useful 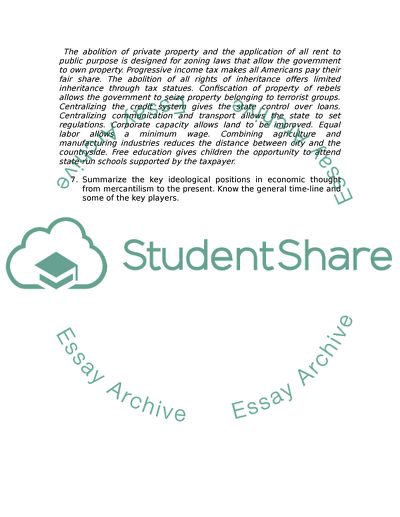 2. Explain the causes of monopolies.
Most monopolies come about when there are high barriers of entry. This prevents new market entrants from entering the market and so it strengthens the share of existing market players. Another cause of monopolies occurs when one firm expands to the point where it has tremendous economies of scale; other competitors drop out of the market because they cannot compete.

3. Describe the incentives for companies to compete with each other or collude with each other –
Companies are likely to collude with each other if there are very few firms in an industry. Because of this, a change in one firm is likely to result in a change in another firm so that market forces remain the same. On the other hand, companies are likely to compete with each other when there is free market economy that allows consumers to pick and choose from many different companies.
4. Know how regulations affect market outcomes, and why these effects may be desirable or undesirable –
Regulations can cause a huge shift in the market, particularly in the labor market. When the government stipulates that employees must certain type of social security, employers have to respond to those changes. This can often mean that a business downsizes because it cannot afford to employ the same number of workers. Regulations primarily stifle business because of all the extra red tape that comes along with it.
5. Explain the differences between capture theory and public-interest theory.
Capture theory stipulates that a government agency may allow the industry that it is charge of to dictate policy that favors the industry as a whole. On the other hand, public-interest theory deals with the interest of consumers. For example, when the market is not efficient as it could be, a regulatory body can act to make changes in regulations.

6. Know and be able to explain the 10 planks of the Communist Manifesto
The abolition of private property and the application of all rent to public purpose is designed for zoning laws that allow the government to own property. Progressive income tax makes all Americans pay their fair share. The abolition of all rights of inheritance offers limited inheritance through tax statues. Confiscation of property of rebels allows the government to seize property belonging to terrorist groups. Centralizing the credit system gives the state control over loans. Centralizing communication and transport allows the state to set regulations. Corporate capacity allows land to be improved. Equal labor allows a minimum wage. Combining agriculture and manufacturing industries reduces the distance between city and the countryside. Free education gives children the opportunity to attend state-run schools supported by the taxpayer.

“Short Answers about Introduction to Political Economy Essay - 2”, n.d. https://studentshare.org/miscellaneous/1614356-short-answers-about-introduction-to-political-economy.
Comments (0)
Click to create a comment or rate a document

..., and controlling natural monopolies, especially in the electricity supply industries and the telecommunications sector. This benefits individual companies too, as regulation encourages fair competition in companies, while protecting the consumers. 5． Differences between capture theory and public-interest theory The idea of capture was developed by George Stigler and argues that, if industries capture their regulatory agencies, they can benefit from regulation. They can do this by making the regulatory agencies depend on their technology and political influence. On the other hand, public-interest theory applies in market failures, when markets fail to regulate themselves, forcing the government to step in because of 6．...
2 Pages(500 words)Essay

...Sur Introduction to Political Economy Familiarize yourself with arguments for and against progressive income taxes. The arguments that stand for progressive income taxes include: Vertical equity (taxes are supposed to be progressive for the purposes of vertical equity in the overall tax system) Redistribution of income (this relates to socially aware governments that seek to combat poverty and enhance social welfare) Benefit theory (It says: wealthier individuals benefit more from various public services. This serves as justification for progressive taxation) Aiming to achieve equity in the overall tax system (the progressive tax is viewed as a means of compensation for regressive taxes...
2 Pages(500 words)Essay