Comments (0)
Add to wishlistDelete from wishlist
Cite this document
Summary
Those earning high income are subjected to higher tax rates than those earning lower income. This is advantageous as it helps reduce the gap between high-income earners and low-income…
Download full paperFile format: .doc, available for editing
HIDE THIS PAPERGRAB THE BEST PAPER92% of users find it useful 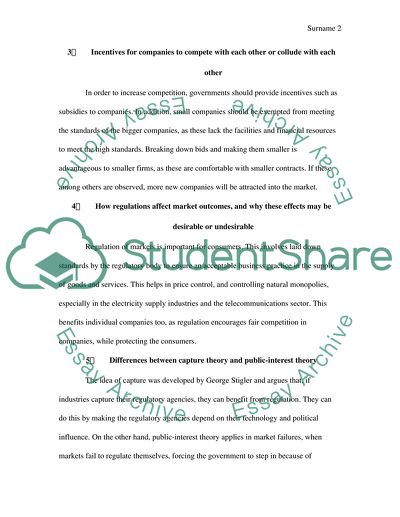 Arguments for and against progressive income taxes Progressive income tax system applies to income of differentpeople at different rates. Those earning high income are subjected to higher tax rates than those earning lower income. This is advantageous as it helps reduce the gap between high-income earners and low-income earners. This system is also fairer than a tax system where everyone pays equal tax rates. Therefore, if one earns more, they are able to give more to the government, and vice versa. However, this system is disadvantageous, as in some way, it punishes hard work. The more one works hard, the more they are taxed, and this discourages hard work. This system also seems unfair, as it imposes different tax rates on people in the same society. The successful high-income earners in society might feel prejudiced.
2． Causes of monopolies
Monopoly is mainly caused by the presence of many barriers in the market, which prevent other business players from gaining entrance into the market. Additionally, when there is no other substitute for specific products in the market, monopoly is likely to occur. In some countries, the government may also give powers to specific companies to monopolize the market legally. Finally, the ownership of patents and copyright protection results in monopoly power for some businesses.
3． Incentives for companies to compete with each other or collude with each other
In order to increase competition, governments should provide incentives such as subsidies to companies. In addition, small companies should be exempted from meeting the standards of the bigger companies, as these lack the facilities and financial resources to meet the high standards. Breaking down bids and making them smaller is advantageous to smaller firms, as these are comfortable with smaller contracts. If these among others are observed, more new companies will be attracted into the market.
4． How regulations affect market outcomes, and why these effects may be desirable or undesirable
Regulation of markets is important for consumers. This involves laid down standards by the regulatory body to ensure an acceptable business practice in the supply of goods and services. This helps in price control, and controlling natural monopolies, especially in the electricity supply industries and the telecommunications sector. This benefits individual companies too, as regulation encourages fair competition in companies, while protecting the consumers.
5． Differences between capture theory and public-interest theory
The idea of capture was developed by George Stigler and argues that, if industries capture their regulatory agencies, they can benefit from regulation. They can do this by making the regulatory agencies depend on their technology and political influence. On the other hand, public-interest theory applies in market failures, when markets fail to regulate themselves, forcing the government to step in because of
6． The 10 planks of the Communist Manifesto
Karl Marx developed these as steps necessary to destroy a free enterprise society, and to replace it with government power that is omnipotent, in order to allow for a communist socialist state. These were meant to test whether a state is communist or not. If they are all in effect, it means the country is practicing communism unknowingly or knowingly. These deny individuals in the state their freedom, thus portraying communism as disastrous to a country and its people.
7． A summary of key ideological positions in economic thought from mercantilism to the present. Know the general time-line and some of the key players.
There are different past thinkers in economics, who helped advance the economic ideology and thought. Aristotle, a Greek writer questioned the aspect of wealth acquisition during his time. Thomas Aquinas during the medieval time, argued about product prices. In the 17th Century, Adam Smith is considered the father of modern economics, as per the arguments he made in his book, Treaties, the Wealth of Nations.
David Ricardo among other classical economists built on Adam’s thought, to come up with a more rigid argument. Karl Marx on the other hand, addressed the capitalistic system in society. From 1870s, neoclassical economists addressed their arguments in economics basing on mathematical and scientific concepts. In the early 20th century, John Keynes advanced his argument, popularly known as the Keynesian policies, which faltered in the 1970s. This paved way for the new classical school, including Robert Lucas and Prescott Edward. The 21st century economists such as Amartya Sen have challenged contemporary economic policies, among other economic issues affecting society today (Medema and Samuels 15-20).
Works Cited
Medema, Steven and Samuels, Warren. The History of Economic Thought. New York:
Routledge, 2012. Read More
Share:
Tags
Cite this document
(“Short answers about Introduction to Political Economy Essay”, n.d.)
Retrieved from https://studentshare.org/miscellaneous/1614352-short-answers-about-introduction-to-political-economy

“Short Answers about Introduction to Political Economy Essay”, n.d. https://studentshare.org/miscellaneous/1614352-short-answers-about-introduction-to-political-economy.
Comments (0)
Click to create a comment or rate a document

...Sur Introduction to Political Economy Familiarize yourself with arguments for and against progressive income taxes. The arguments that stand for progressive income taxes include: Vertical equity (taxes are supposed to be progressive for the purposes of vertical equity in the overall tax system) Redistribution of income (this relates to socially aware governments that seek to combat poverty and enhance social welfare) Benefit theory (It says: wealthier individuals benefit more from various public services. This serves as justification for progressive taxation) Aiming to achieve equity in the overall tax system (the progressive tax is viewed as a means of compensation for regressive taxes...
2 Pages(500 words)Essay