Comments (0)
Add to wishlistDelete from wishlist
Cite this document
Summary
This study encompasses a critical review of the article regarding application of the evaporating tool in organizational communications and conflict solving among groups in the workplace. Notably, the evaporating tool is perceivably, a thinking process in Goldratt’s constraints…
Download full paperFile format: .doc, available for editing
HIDE THIS PAPERGRAB THE BEST PAPER92.3% of users find it useful 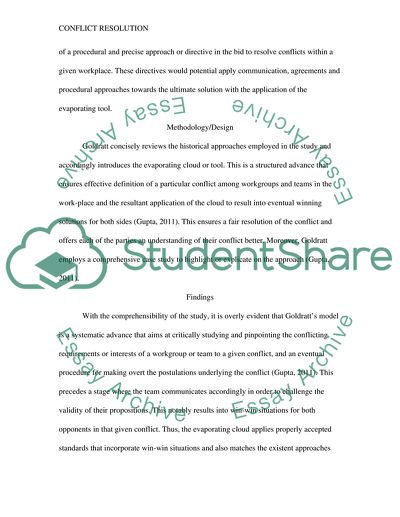 Conflict Resolution in the workplace and Its Effects on the Team/Group Introduction This study encompasses a critical review of the article regarding application of the evaporating tool in organizational communications and conflict solving among groups in the workplace. Notably, the evaporating tool is perceivably, a thinking process in Goldratt’s constraints theory (Gupta, 2011). This concept enables any business system or organization to improve focus. Literarily, this method is perceived a diagram for conflict resolution. Moreover, it is meant to generate a solution to conflicts among different parties or viewpoints, through particular communication.
It aids any disputing teams within an affiliation to achieve victory situations collectively, rather than win-fail. It emphasizes that each of the groups or teams aim at achieving a common ultimate objective or goal that would settle a dispute. The associated steps in this cloud includes initially deciding on resolving the quandaries existent between the two or more involved teams or groups in any given affiliation. Secondly, the groups draw the cloud, establish the conflict, common objective then make the intermediary assertions. The parties then agree on the correctness of the definition and test the underlying implications.
Purpose of the Study
This particular article bears two fundamental purposes. Firstly, this study critically synthesizes and validates the contemporary concepts, notions, explications, propositions and credible modes of management within a given workplace in the context of conflicts involved and employment of communication prospects to arrive at a tacit conclusion for workgroups and teams. Secondly, the study encompasses an introduction of a procedural and precise approach or directive in the bid to resolve conflicts within a given workplace. These directives would potential apply communication, agreements and procedural approaches towards the ultimate solution with the application of the evaporating tool.
Methodology/Design
Goldratt concisely reviews the historical approaches employed in the study and accordingly introduces the evaporating cloud or tool. This is a structured advance that ensures effective definition of a particular conflict among workgroups and teams in the work-place and the resultant application of the cloud to result into eventual winning solutions for both sides (Gupta, 2011). This ensures a fair resolution of the conflict and offers each of the parties an understanding of their conflict better. Moreover, Goldratt employs a comprehensive case study to highlight or explicate on the approach (Gupta, 2011).
Findings
With the comprehensibility of the study, it is overly evident that Goldratt’s model is a systematic advance that aims at critically studying and pinpointing the conflicting requirements or interests of a workgroup or team to a given conflict, and an eventual procedure for making overt the postulations underlying the conflict (Gupta, 2011). This precedes a stage where the team communicates accordingly in order to challenge the validity of their propositions. This notably results into win-win situations for both opponents in that given conflict. Thus, the evaporating cloud applies properly accepted standards that incorporate win-win situations and also matches the existent approaches aimed at executing conflict resolution and effective communication among members in the workplace.
Implications
Regardless of the prospect that there exists an exponentially growing society of users of the cloud, it is openly perceived to be a totally new advance of conflict resolution in the contemporary epoch. Moreover, though undependable instances of applications of the evaporating tool have been in numerous journal publications, other mediums, such as conferences, empirical researches, academic researches and websites ought to be introduced in order to critically and credibly evaluate the pertinence of the tool in resolving conflicts within the workplace environment (Gupta, 2011). This is because an immensely wide and diverse array of users exists and would effectively access and learn through many gateways.
Practical Implications
The evaporating tool is one that is practically applicable and also intuitive. This proves its credibility for employers and employees within a given affiliation, at all available levels of management and administration, to comprehend and effectually resolve conflicts among their working units such as teams and workgroups. Therefore, the evaporating tool is very resourceful and useful in such situations.
Value/Originality
The study of this tool pinpoints the associated drawbacks of existent conflict management and resolution approaches. Additionally, the study covers applications of the cloud tool to an immense range of cases and group conflicts within workplaces, from inter-personal to executive altitudes. It hence comes as a legitimate and feasible study which every team or group in a given workplace can employ to enhance their relations and advance their communication and conflict resolution skills.
References
Gupta, L. B. (2011). The evaporating cloud: a tool for resolving workplace conflict. International Journal of Conflict Management, 22, 394-412. Read More
Share:
Tags
Cite this document
(“Conflict resolution in the workplace and its effects on the team/group Essay”, n.d.)
Retrieved from https://studentshare.org/miscellaneous/1613740-conflict-resolution-in-the-workplace-and-its-effects-on-the-teamgroup

(Conflict Resolution in the Workplace and Its Effects on the team/Group Essay)
https://studentshare.org/miscellaneous/1613740-conflict-resolution-in-the-workplace-and-its-effects-on-the-teamgroup.

“Conflict Resolution in the Workplace and Its Effects on the team/Group Essay”, n.d. https://studentshare.org/miscellaneous/1613740-conflict-resolution-in-the-workplace-and-its-effects-on-the-teamgroup.
Comments (0)
Click to create a comment or rate a document

...“Conflict Resolution – Workplace ADR” During summer last year, I volunteered to work at a bank forapproximately ten weeks. I wanted to do something constructive during my vacations instead of sitting idle, so I applied for the position of a Student Advisory Board Member for a project which revolved around launching the new customer value proposition of the Priority Banking Segment of Consumer Banking of that bank. Since the idea behind launching the new value proposition was for the customers to be aware of the augmented benefits that accompany the revised proposition, the management decided that the best way to do that would be to organize an event in which the high-profile guests can...
5 Pages(1250 words)Essay

Conflict and Its Resolution

...?Conflict resolution Introduction Organizational set ups have diversified personalities, a condition that is prone to differences in opinions and even disagreements. Such differences and disagreements form the basis of conflicts and threaten collectivity in organizations. This identifies the significance of conflict resolution. In this paper, I review a work related situation that involved a conflict, explore the scope of the conflict, its resolution approach, and an alternative resolution approach. Overview of the situation Organizations realize...
3 Pages(750 words)Essay

...a division in the group performance. Some of the group members do not recognize his new post as their supervisor and this undermines his job; and others decide to stay away from him. This group, which distances itself from him talks negatively about him and he feels degraded. Cheryl as well does not give him humble time to carry out his duties due to her jealousy. The obstacles encountered in this conflict resolution are developing a sense of trust again between the two parties; and how to justify to them especially Cheryl that the promotion of Williams was purely the management's decision and that nobody influenced it. The trust between the two parties...
5 Pages(1250 words)Essay

...and which threaten personal and professional goals and desires of a person. It is often observed that poor communication among the workers and administrators lead to conflicting situations. “If resolution to a conflict is to end properly, it must begin properly – by negotiating a solvable problem. Therefore, the act of successful conflict resolution begins with the way the problem is examined” (Erickson). Thus, the best way to tackle workplace conflicts is to provide a neutral platform to the involved parties and thrash out the differences with a mediator with clear intention of solving it. The mediator is a person who...
2 Pages(500 words)Essay

...Lecturer: Presentation: Conflict resolution is a significant step towards solving the inevitable actuality of conflict in groups. It is an important activity that seeks to establish common grounds for members of a particular group to work in order to achieve a common goal. It helps in appreciating the diversity of members of a group and creating harmony amongst them (Wisinski 1993). This practice provides an individual with a chance to have his unique character brought forth to acquire identity in a group of other unique characters. A successful endeavor for conflict resolution leads to...
2 Pages(500 words)Essay

...Qualitative Research Paper about Conflict Resolution It is human to have a difference of opinion with another person. That is because every person has his own values, thoughts and experiences. However, when people refuse to accept the other’s point of view, conflict arises. Conflict is generally thought to be something negative and counterproductive and therefore, it must be avoided. Fact of the matter is, conflict allows different opinions to come forth, new dimensions to be studied and healthy arguments to occur. But if this conflict is not managed or resolved appropriately, it can actually have very negative effects on...
5 Pages(1250 words)Research Paper

...and non defensive Recognizing and understanding fellow peers and workmates 5). Where are they effective in resolution? -Being a good listener ensures that a person pays attention to the feelings and words expressed by other people thereby reducing incidences of conflict (Segal, Boose, & Smith, 2013). -Being calm, respectful, and non-defensive limits the use of disrespectful words as well as actions. This reduces chances of engaging in arguments and thereby minimizing conflicts (Segal, Boose, & Smith, 2013). -Recognizing and understanding fellow peers and workmates ensures that a person recognizes and responds to issues of utmost importance to the other individual,...
2 Pages(500 words)Essay

Let us find you another Essay on topic Conflict resolution in the workplace and its effects on the team/group for FREE!