Comments (0)
Add to wishlistDelete from wishlist
Cite this document
Summary
As time developed, so did different cultures understanding of themselves and of the role art could play in the larger society. Three cultures represent a wonderful evolution of the role art…
Download full paperFile format: .doc, available for editing
HIDE THIS PAPERGRAB THE BEST PAPER97% of users find it useful 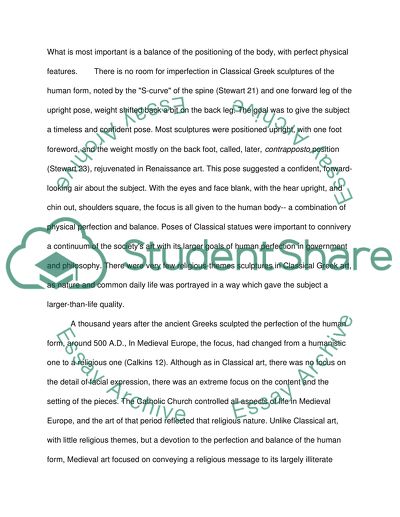 CHECK THESE SAMPLES OF Art final

...Part I: Answer the following questions a) One major difference between products of art work and other finished products is that art products are not consumable orally. This means that the products cannot be squandered or eaten. All the same, they are seen as consumable commodities. As a consumption good, art can serve many of the following uses: beautification, mental satisfaction, admiration, spiritual rehabilitation and personal upliftment. (b) Integrating the list made in class to the ideas developed by Mary Douglas in The World of Goods, it can be deduced that art can serve as an important economic commodity that qualifies to be known as consumption good. This is...
4 Pages(1000 words)Assignment

...ART HISTORY FINAL PAPER Explain the architectural and decorative program of the Great Stupa at Sanchi. How does the structure support the tenets of Buddhism? What is a Stupa and from which Hindu form is the shape and decorative elements derived? The Stupas are arranged to form hemispherical domes covering a relatively large area.it have a central chamber that served as the positioning of the relics of the Buddhists. There are four curves of the gateway that faces four directions of the railings. The Stupas have stone fencings as the railings and staircase make decorations. A path exists for circumambulation located near the main Stupa. There are motif of sculptures designed on the railings and the gates of the Stupa... HISTORY FINAL PAPER...
4 Pages(1000 words)Essay

...Visual Arts and Film Studies Evolution of Art Introduction Many art fans value art from several periods. The value of art does not increase with time. In fact, most art fanatics treasure old paintings. The most expensive paintings were painted in between the 13th to 17th century. As such, measuring the quality of art while using an approach that involves reviewing the date it was painted is wrong. As such, it is good to love art created in various stages of the development. Creativity, development of new ideas, new ways of painting and different subjects define the development of art at...
2 Pages(500 words)Essay

.... It was relevant to pay attention to formal features and to historical background of each work we studied. This approach was great because it developed deep background knowledge and patience to research. 6. Finally, it is time to say goodbye! Post your fond farewells . I wish all students to take this course seriously and learn more about art. It is great that some of us are given the second chance to discover beauty around us. Thank you for the course!... Art Appreciation Art Appreciation What was your favorite module or discussion? Which works of art or art-related discussion topics affected you the most and why? Who was the artist that inspired you the most? I liked to...
1 Pages(250 words)Essay
sponsored ads
Save Your Time for More Important Things
Let us write or edit the essay on your topic "Art final" with a personal 20% discount.
GRAB THE BEST PAPER

Let us find you another Essay on topic Art final for FREE!