Comments (0)
Add to wishlistDelete from wishlist
Cite this document
Summary
Most foreign terrorist organizations or FTO’s are identified by the Bureau of Counterterrorism based on the scope and the level of damages that these groups do within their home country, as well as their intent to compromise the US security. An example of a strong group is the…
Download full paperFile format: .doc, available for editing
HIDE THIS PAPERGRAB THE BEST PAPER93.8% of users find it useful 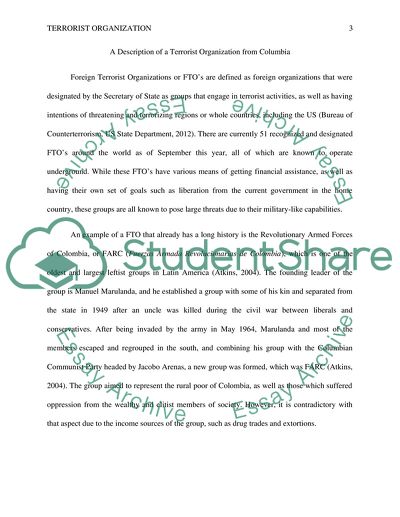 A OF A TERRORIST ORGANIZATION FROM COLUMBIA Most foreign terrorist organizations orFTO’s are identified by the Bureau of Counterterrorism based on the scope and the level of damages that these groups do within their home country, as well as their intent to compromise the US security. An example of a strong group is the Revolutionary Armed Forces of Colombia, or FARC, which mostly uses illegal businesses to finance its military powers. The group is comparable to the Al-Qaeda group due to their similar causes of liberating the poor and condoning the support of the US government to their own home countries, however the similarities end there, as the Al-Qaeda is known to have greater connections than the FARC. Due to the paralysis that the FARC experienced after most of its guerilla leaders and some high-ranking officials were killed and sent to prison, respectively, it was initially labeled as a group with a low chance of committing terrorist acts. However, it was also highly-capable of resurgence, which keeps it in the official list of designated terrorist groups of the Bureau of Counterterrorism.
A Description of a Terrorist Organization from Columbia
Foreign Terrorist Organizations or FTO’s are defined as foreign organizations that were designated by the Secretary of State as groups that engage in terrorist activities, as well as having intentions of threatening and terrorizing regions or whole countries, including the US (Bureau of Counterterrorism, US State Department, 2012). There are currently 51 recognized and designated FTO’s around the world as of September this year, all of which are known to operate underground. While these FTO’s have various means of getting financial assistance, as well as having their own set of goals such as liberation from the current government in the home country, these groups are all known to pose large threats due to their military-like capabilities.
An example of a FTO that already has a long history is the Revolutionary Armed Forces of Colombia, or FARC (Fuerzas Armada Revolucionarias de Colombia), which is one of the oldest and largest leftist groups in Latin America (Atkins, 2004). The founding leader of the group is Manuel Marulanda, and he established a group with some of his kin and separated from the state in 1949 after an uncle was killed during the civil war between liberals and conservatives. After being invaded by the army in May 1964, Marulanda and most of the members escaped and regrouped in the south, and combining his group with the Columbian Communist Party headed by Jacobo Arenas, a new group was formed, which was FARC (Atkins, 2004). The group aimed to represent the rural poor of Colombia, as well as those which suffered oppression from the wealthy and elitist members of society. However, it is contradictory with that aspect due to the income sources of the group, such as drug trades and extortions.
The FARC is an organization that aims to liberate the rural poor, as well as opposing the stand of the Colombian government of relying on foreign aid, such as the US (Atkins, 2004). The operations mostly involved guerilla tactics, kidnapping prominent people for a huge sum, murder of innocent passersby within the confines of their jungle territory, and exchanging fires with the Colombian army. Despite having peace talks around the early 2000’s, the FARC and the Colombian government were unable to make a compromise, ending possible chances for peace. In comparison with another FTO, the much more notorious Al-Qaeda from Afghanistan, they also share similar causes of equalizing the social inequalities in their home nation, using ideals that are indirectly related to the principles set by the Islamic religion. Much like the FARC, Al-Qaeda also functioned mostly like an independent state, enabling a small group to gather large members in just a few years, and is contrary to what most people believe, that the Al-Qaeda uses fundamentalist ideas of Islam to justify their acts of terrorism (Burke, 2004). However, the similarities end here, as the Al-Qaeda has a large network in other nearby Islamic nations, whereas the FARC mostly functions within Colombia.
Further progress of the group was slowed down greatly with the deaths of most senior guerilla leaders of the group, as well as capturing a high-ranking leader in 2003 (Atkins, 2004). However, the FARC is still considered to be an active FTO due to resurgence of terrorist attacks during election periods, and such capacities to perform acts of terrorism despite the removal of some prominent leaders in the group keeps it in the recent list of designated terrorist groups (Bureau of Counterterrorism, US State Department, 2012). At present the group is not known to pose a strong threat against the Colombian government, especially with the increased efforts of the latter by maintaining contacts with other international agencies, such as the INTERPOL, as well as providing a formalized debriefing process, counseling, relocation, and job replacement assistance to former rebel members, giving them better options than staying in the guerilla group (Office of the Coordinator for Counterterrorism, 2012).
References
Atkins, S. (2004). Modern Worldwide Extremists and Extremist Groups. Westport, CT: Greenwood Publishing Group.
Bureau of Counterterrorism, US State Department. (2012, September 28). Foreign terrorist organizations. Retrieved from Foreign Terrorist Organizations Web site: http://www.state.gov/j/ct/rls/other/des/123085.htm
Burke, J. (2004). Al-Qaeda: The True Story of Radical Islam. New York, NY: I.B. Tauris & Co., Ltd.
Office of the Coordinator for Counterterrorism. (2012, July 31). Chapter 2. Country reports: western hemisphere overview. Retrieved from Country Reports on Terrorism 2011 Web site: http://www.state.gov/j/ct/rls/crt/2011/195546.htm Read More
Share:
Tags
Cite this document
(“Terrorist Organization Assignment Example | Topics and Well Written Essays - 500 words”, n.d.)
Terrorist Organization Assignment Example | Topics and Well Written Essays - 500 words. Retrieved from https://studentshare.org/miscellaneous/1611360-terrorist-organization

CHECK THESE SAMPLES OF Terrorist Organization

...? TERRORIST ORGANIZATION …………………. College/ ………….. …………. Introduction None has so far been able to define the term‘terrorism’ in a manner that can be universally acceptable, but still, most literatures described that terrorism is an act of frightening or intimidating individuals, people or even governments. Organizations that are formed or are working under the title of terrorism do function differently, mainly being heartless and evil-minded with no perceived moral compass (Mehrotra, 2006, p. 746). This piece of research paper attempts to analyze various types of terrorist organizations and one of the most famous terror groups, namely Al-Qaeda in relation to its organizational objectives and targets based on relevant principles... and...
3 Pages(750 words)Research Paper

...﻿The Al-Qaeda Terrorist Organization The tragedy that befell the World Trade Center in New York and the United States as a country on September 11, 2001, now known as the 9/11 incident, had virtually made the al Qaeda a household name. Born in the aftermath of the ten-year resistance of combined Afghan and Arab forces against the Soviet invasion of Afghanistan in 1978 until its eventual defeat and retreat in 1989, al Qaeda is headed by the charismatic Saudi multi-millionaire Osama bin Laden. Al Qaeda had been previously linked to several terrorist activities in the past but it was the 9/11 incident that drove home the point: al Qaeda is not only a terrorist...
10 Pages(2500 words)Essay

...Hezbollah is a political and military organization labeled as terrorists by most western nations. The origins and current operations of the group are closely associated with the Islamic Revolution of 1979 in Iran. Hezbollah is comprised o Shiite Muslims that agree with the precepts of violent revolution as a means to establishing a world-wide Muslim state governed by Sharia law. More specifically, Hezbollah grew out of the Israeli/PLO conflict that spilled into southern Lebanon in the early 1980’s. The Shiite community had already been marginalized in Lebanon. They bore the brunt of the conflict between the Israeli’s and the PLO. As a result, Hezbollah was born initially as an...
4 Pages(1000 words)Research Paper

2. Compare and contrast the motivations of a Middle Eastern terrorist organization with those of a domestic terrorist group. What are the similarities and differences

...Terrorist Organization Hezbollah This research papers give an enigma of the current terrorist activities highlighting the major terrorist organization “Hezbollah”- the army of God, in context to its aims, policies, activities and influences on international terrorism, signifying the purpose of Hezbollah and its ideology affecting the current International peace. It also gives an insight to the controversial international context of Europeans supporting it. This paper further discusses policies and assessments of the U.S Government to encounter Hezbollah and its activities and to gain control of Lebanon. Introduction Similar to Taliban’s rise as an...
12 Pages(3000 words)Research Paper

1 Pages(250 words)Assignment
sponsored ads
Save Your Time for More Important Things
Let us write or edit the assignment on your topic "Terrorist Organization" with a personal 20% discount.
GRAB THE BEST PAPER

Let us find you another Assignment on topic Terrorist Organization for FREE!