Comments (0)
Add to wishlistDelete from wishlist
Cite this document
Summary
The play’s interesting nature is from the fact that women take the center stage, as they have both antagonist and protagonist roles in the…
Download full paperFile format: .doc, available for editing
HIDE THIS PAPERGRAB THE BEST PAPER95.6% of users find it useful 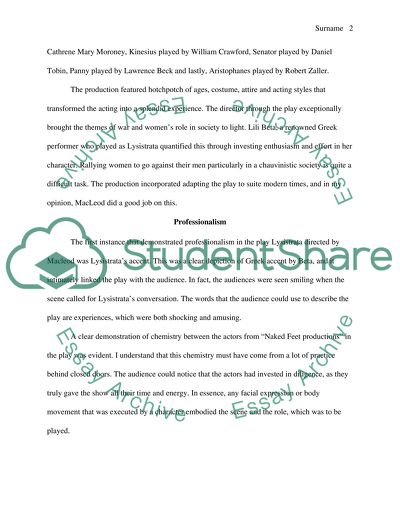 Reaction Paper: Lysistrata the Play Lysistrata is a play by Aristophanes whose composition was inspired by the Peloponnesian war, which occurred between Athens and Sparta. The play’s interesting nature is from the fact that women take the center stage, as they have both antagonist and protagonist roles in the play. The play depicts strength in numbers particularly strength of a woman and this makes me like the play. I managed to get a chance of attending the Philadelphia Live Arts Festival and the Philly Fringe. I can happily state that this was a splendid experience. Essentially, I was astonished, by the way; Hannah Tsapatoris MacLeod directed the play Lysistrata. Macleod made me love the play Lysistrata even more. This is a reaction paper to the play Lysistrata by “Naked Feet productions”.
Production
Hannah Tsapatoris MacLeod proved that she was not an amateur, but a respected director of Greek plays. As a founder and director at “Naked Feet productions”, she showed her prowess by bringing a team together with the aim of performing the play Lysistrata. Her experiences include performing, choreographing, writing, singing, directing and teaching art.
The following are the characters in the play. Kalonike was played by Meryl Lynn Brown, Myrrhine played by Jill Lawrence, Lampito played by Eleonore Thomas, Isemenia played by Cathrene Mary Moroney, Kinesius played by William Crawford, Senator played by Daniel Tobin, Panny played by Lawrence Beck and lastly, Aristophanes played by Robert Zaller.
The production featured hotchpotch of ages, costume, attire and acting styles that transformed the acting into a splendid experience. The director through the play exceptionally brought the themes of war and women’s role in society to light. Lili Beta, a renowned Greek performer who played as Lysistrata quantified this through investing enthusiasm and effort in her character. Rallying women to go against their men particularly in a chauvinistic society is quite a difficult task. The production incorporated adapting the play to suite modern times, and in my opinion, MacLeod did a good job on this.
Professionalism
The first instance that demonstrated professionalism in the play Lysistrata directed by Macleod was Lysistrata’s accent. This was a clear depiction of Greek accent by Beta, and it intimately linked the play with the audience. In fact, the audiences were seen smiling when the scene called for Lysistrata’s conversation. The words that the audience could use to describe the play are experiences, which were both shocking and amusing.
A clear demonstration of chemistry between the actors from “Naked Feet productions” in the play was evident. I understand that this chemistry must have come from a lot of practice behind closed doors. The audience could notice that the actors had invested in diligence, as they truly gave the show all their time and energy. In essence, any facial expression or body movement that was executed by a character embodied the scene and the role, which was to be played.
When watching the play, I had the feeling that I was in the mind of Aristophanes at the time he was writing this play. In general, the audience felt as if they were witnessing the actual events that occurred at the time the play was written. The imagination after the play could be described as Greek lifestyle coming back to life.
In conclusion, Lysistrata is a play that is worth dedicating time to watch. The magic in it is the idea that an old Greek play is acted in a modern manner, but it still emits the concept that the author originally had in mind. I truly appreciate the work that was done by “Naked Feet productions”.
Works Cited
Aristophanes. Lysistrata. Athens, 410 BC. Print. Read More
Share:
Tags
Cite this document
(“Lysistrata play Essay Example | Topics and Well Written Essays - 500 words”, n.d.)
Retrieved from https://studentshare.org/miscellaneous/1610643-lysistrata-play

CHECK THESE SAMPLES OF Lysistrata play

...An Essay Comparing Givenchy’s Play and Play Intense Cologne This essay aims to compare and contrast Givenchy’s Play and Play Intense Colognes. The Play Intense cologne was introduced first in 2008 while Play Intense was launched after a year in 2009. Although both colognes were developed by Givenchy, the fragrance they exude differs. The first point of comparison that will be discussed is the fragrances that were combined to create the cologne. The Play Cologne consists of mandarin orange, patchouli, bergamot, grapefruit, Amyris wood, bitter orange, black pepper and Vetyver (FragranceNet , par 1). On the other hand, the...
3 Pages(750 words)Essay

Lysistrata Unbound fit as a prequel to Aristophanes' original play

...? 21 February Lysistrata Unbound Fits as a Prequel to Aristophanes Lysistrata Introduction The play Lysistrata unbound by Aristophanes set the tone for the understanding of the plight of women during war times. The play centers on the role of the Greek women in finding a lasting end to the Peloponnesian war. With Lysistrata leading the group of the Greek women, she organized a forum where all the Greek women would converge to proffer possible solutions that would restore peace and end the long raging war. Her plan was to use the sex drive of the women to force their husbands into a treaty that would put an end to the war. She tries to...
5 Pages(1250 words)Essay

...The Battle of Two Sexes in Lysistrata Aristophanes's Lysistrata may be seen as one of the earliest pieces of feminist literature that empowers women,though in a rather ironic way. The play opens with the introduction of Lysistrata, raging about the inaction of women in her country because they seem to be either oblivious or resigned regarding the war in Greece. When Lysistrata's neighbor Kleonike points out that most women are confined in the domestic sphere and they are not used to transgressing into the public sphere, Lysistrata is furious as her fellow women accepts the domestic and submissive roles assigned to them by their husbands. Lysistrata then decides to summon all women and ask them to turn down any sexual requests... from...
3 Pages(750 words)Essay

...Play THE CLOSEST THING TO A FAMILY REUNION This play is about the essence of staying together in a family. This screen play by Heather Rafferty is single act demonstration, set in a small church, having a funeral urn on a stand, while the timing of the play is around one month after the Easter. The main character is named as Jay, being around 33years old, his sister Billy, 30years is feeling guilty about her long absence. There is a sixty year’s old priest who is well experienced to handle religious functions concerning funerals. While Billy enters the church hall along with the priest, after Jay, the first thing Jay says to his sister is about not seeing her since long time. Both Jay and Billy are surprised to find no one else... was away...
4 Pages(1000 words)Essay

Thesis on Lysistrata by Aristophanes

...Your full and Number of Gender Power and Tradition in "Lysistrata" by Aristophanes The play Lysistrata is, among other aspects, a unique study in gender qualities. As characters Aristophanes has chosen different types of women as benchmarks by which to measure the strong, independent and decidedly “male” character of Lysistrata-- eloquent as a speaker, thoroughly involved in the politics of the day. Other women in the play possess “traditional” female characteristics, which Aristophanes not only disputes through the character of Lysistrata, Aristophanes holds up to scrutiny the necessary ideal of the feminine as powerless as falsely...
5 Pages(1250 words)Thesis

...The interests of the Greece women related to the war in the lysistrata play From the play, women scold the old men by informing them that they had to do men’s jobs such as preparing sacrifices for gods as well as paying taxes to the state while the men are concentrating with the Peloponnesian war. In the meeting planned by lysistrata, the women question the purpose of the meeting, and she explains them the need to get involved to the war by asking them if they would like their husbands to be safely resorted to them from the war? All women in unison agree since the war has taken most of their husband’s family time, by not playing the role as fathers to...
1 Pages(250 words)Essay

..., courageously and in a very public way. Protestors today may not share the same immediate threats as Lysistrata, but the dangers are still there. Lysistrata is such a compelling figure of strength and determination that even a Greek guy wearing a mask could evoke the emotion Aristophanes infused in this character. Of course, modern sensibilities prefer that a strong, intelligent and probably beautiful actor be used to bring this character to life. This is the way of Hollywood, after all. But from the standpoint of acting and emotion, the real character of Lysistrata lies in the writing of Aristophanes. The medium used to bring this character to life is almost irrelevant. The story...
1 Pages(250 words)Movie Review

...Lysistrata by Aristophanes The humor in the play is focused on the strategy that Lysistrata thought of in order to end the war. Aristophanes could have thought of other ways to encourage the men to end the war but he instead though of a “sexual strategy”. This is quite humorous since it is very out of the ordinary and is presented in the play in an interesting way. One finds the part of the play where Kinesias was shown with a full erection and pleading his wife, Myrrhine for sex, funny. One’s favorite character in the play is Lysistrata. She exemplifies the characteristic of a good leader. She is very intelligent,...
1 Pages(250 words)Essay

...LYSISTRATA: A REVIEW Introduction Lysistrata, a play written by Aristophanes, doubles up as one of his most unique andpopular pieces. The title of the play (Lysistrata) is the [Greek] name of the main characterwho happens to be a woman. Aristophanes remains one of the greatest icons representing Greek comedy and drama, and also the one whose most works are still preserved to this day. Of the average forty plays he produced, eleven are still relevant today. He lived between 450 BC and 388 BC, a span remarkable for Old Comedy. Old Comedy is the period when there was freedom of political criticism and burlesque, mime and chorus still characterized comic dramaturgy. In Lysistrata, the main subject revolves around the rise of feminism... . An...
5 Pages(1250 words)Book Report/Review
sponsored ads
Save Your Time for More Important Things
Let us write or edit the essay on your topic "Lysistrata play" with a personal 20% discount.
GRAB THE BEST PAPER

Let us find you another Essay on topic Lysistrata play for FREE!