Comments (0)
Add to wishlistDelete from wishlist
Cite this document
Summary
09–497 (6/21/2010), United States Supreme Court settled that, when an agreement defined in Federal Arbitration Act (FAA) includes an agreement, in which the arbitrator determines the jurisdiction of the accord, then such agreement becomes…
Download full paperFile format: .doc, available for editing
HIDE THIS PAPERGRAB THE BEST PAPER94% of users find it useful 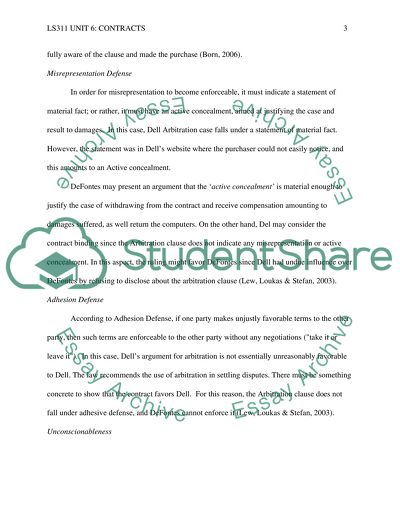 LS311 Unit 6: Contracts The legal case that DeFontes v. Dell raises falls under contract formation, as well the defense and jurisdiction to decide whether the arbitration contains an enforceable clause.
Jurisdiction of the Arbitration section
In Rent-a-center verses Jackson No. 09–497 (6/21/2010), United States Supreme Court settled that, when an agreement defined in Federal Arbitration Act (FAA) includes an agreement, in which the arbitrator determines the jurisdiction of the accord, then such agreement becomes enforceable if the party to the case disagrees with the jurisdiction of that agreement (Born, 2006).
On the other hand, when the party to the contract disagrees with the jurisdiction of the agreement in totality, then the cases is ruled in favor of the Arbitrator. In the case scenario, the decision of the court depends upon the Arbitration Clause preserved by Dell, as it may be lawfully difficult to consider the validity of the agreement as a whole, thus making the Arbitration clause unquestionable. The validity of the clauses becomes valid if only the clause is independent and enforceable (Born, 2006).
Given that, the facts are not supportive, then the assumption is left on the hands of the court to decide on the validity of the whole contract, inclusive of the Arbitration clause.
Contract Formation
Pursuant to the Uniform Commercial Code, which oversees the sale of goods, a valid contract, must indicate the agreement of the participating parties. In the scenario, Dell’s terms and conditions are printed on their website during the time of the transaction, and DeFontes went ahead and conducted the transaction. For this reason, there is an assumption that DeFontes was fully aware of the clause and made the purchase (Born, 2006).
Misrepresentation Defense
In order for misrepresentation to become enforceable, it must indicate a statement of material fact; or rather, it must have an active concealment, aimed at justifying the case and result to damages. In this case, Dell Arbitration case falls under a statement of material fact. However, the statement was in Dell’s website where the purchaser could not easily notice, and this amounts to an Active concealment.
DeFontes may present an argument that the ‘active concealment’ is material enough to justify the case of withdrawing from the contract and receive compensation amounting to damages suffered, as well return the computers. On the other hand, Del may consider the contract binding since the Arbitration clause does not indicate any misrepresentation or active concealment. In this aspect, the ruling might favor DeFontes since Dell had undue influence over DeFontes by refusing to disclose about the arbitration clause (Lew, Loukas & Stefan, 2003).
Adhesion Defense
According to Adhesion Defense, if one party makes unjustly favorable terms to the other party, then such terms are enforceable to the other party without any negotiations ("take it or leave it"). In this case, Dell’s argument for arbitration is not essentially unreasonably favorable to Dell. The law recommends the use of arbitration in settling disputes. There must be something concrete to show that the contract favors Dell. For this reason, the Arbitration clause does not fall under adhesive defense, and DeFontes cannot enforce it (Lew, Loukas & Stefan, 2003).
Unconscionableness
Unconscionableness requires the existence of both unreasonable favorable terms and bargaining power by either of the party to the contract. As discussed, the arbitration clause does not fall under the unreasonable favorable terms, but Dell has a control over the contract since the contract falls under the “take it or leave it”. It, therefore, proves difficult to consider legal Unconscionableness, and Del wins the case (Lew, Loukas & Stefan, 2003).
References
Born, G. (2006). International Arbitration and Forum Selection Agreements: Planning Drafting and Enforcing, 2nd Ed. The Hague: Kluwer Law International.
Lew, D. M., Loukas A., & Stefan K. (2003). Comparative International Commercial
Arbitration. The Hague: Kluwer Law International. Read More
Share:
Tags
Cite this document
(“LS311 Unit 6: Contracts: Completed - CASE ANANLYSIS Essay”, n.d.)
Retrieved from https://studentshare.org/miscellaneous/1609334-ls311-unit-6-contracts-completed-case-ananlysis

...? Contracts work 10/20 Executive Summary The recommendation described below reflects the assessment of this based on the provisionsindicated by the NEC3-ECC contract frame work. I shall describe an alternative framework that may provide more understanding and coverage as far as ensuring project completion. The combination of the two frameworks shall be the recommended convergence of two frameworks designed at completing projects. AOS Development is a national housing development company in Edinburgh and has embarked on eighty housing units developments in Skye, Scotland. The consultant’s documents were submitted on time, planning permissions gained and...
12 Pages(3000 words)Coursework

Unnecessarity for English Learners Becoming Perfect Speakers of the Language

...Timeline of Gendered Movements of the of the Concenred January 19, Timeline of Gendered Movements The 1848 First Women’s Rights convention held at Seneca Falls was the first influential and groundbreaking women’s right convention happening not only in the United States of America, but rather in the entire Western World. This convention was not only a worthy precedent to the First National Women’s Rights convention held in Worcester in 1850, but also represents the first methodical and organized attempt to bring the question of women’s right on the political stage of the United States of America. In that context this convention happened to be the single most potent and important step on the part of the...
3 Pages(750 words)Research Paper

...The Economics of Labor Markets The Economics of Labor Markets I feel that the compensation in terms of the remuneration for the work and services I offer is fair. Considering the fact that it is above the minimum wage set by the labor laws, it gives me the feeling of satisfaction that it is fair. Additionally, despite the pay being low, I feel it is still fair and commensurate with my current level of education which definitely determines my level expertise, the favorable terms and conditions in terms of hours worked and workload amongst various nonmonetary attributes I enjoy. I however hope for better opportunities, terms and compensation in future. Imbalances in the wage structure in our economy Imbalances in wage structure... Economics of...
2 Pages(500 words)Assignment

...Running Head: CASE MANAGEMENT DISCUSSION: CLINICAL SYNDROMES Mental Status Exam The theory and application of Diagnostic and Statistical Manual Axis I allows practitioners to understand a client’s mental problem. Procedures on mental status exam outlined within the manual facilitate acquisition and provision of relevant information to clinical officers and case managers. DSM Axis assesses a patient’s problem from five dimensions. This essay appreciates resourcefulness of DSM by applying its first dimension in establishing a case of mental problem with a client. With respect to the diagnosis, the subject appeared meticulously groomed. The client was unusually perfect and smartly dressed....
1 Pages(250 words)Case Study

...1. Why is it necessary for case managers to know how to complete a provisional DSM Diagnosis? The Diagnostic and Statistical Manual of Mental Disorders (DSM; APA, 2000) is a standardized compilation of diagnoses of mental disorders, characterized by distinct behaviors and symptoms that help in diagnosing individuals, discussing their symptoms and planning for their care. Case Managers are required to be familiar with the language and process of the DSM in order to recognize a mental disorder, communicate effectively and may even need to provide a provisional diagnosis in an emergency! Our author states that “it is becoming common practice for insurance companies and other payers to...
1 Pages(250 words)Research Paper

...Unit 6 al affiliation Unit 6 Qs Strategy evaluation is becoming more and more complicated with time. As seen in the research conducted by David (2011), this is because the future cannot be predicted with the required accuracy. With the future becoming more unpredictable, evaluation, therefore, becomes difficult. Secondly, the environment is becoming extremely complex with time; thus, placing the strategic evaluators at a fix of taking the correct actions (David, 2011). The variables are also increasing by the day. The evaluators then face the challenge of taking the required measures to achieve success even in the long term. Lastly, David (2011) indicates that the domestic and the international events have not ceased to augment... effects of...
2 Pages(500 words)Essay

...MT140 Unit 6 Discussion The case presents a situation where the management does not have all the information on the operations at the company. Such a situation leaves the company vulnerable to unscrupulous employees a feature that validates the need for an effective control system. Management control system is that enhances the controlling function of management. The system gathers information and uses them in determining and evaluating the utilization of the various resources at the organization such as human, financial and physical resources among others. Setting up and implementing a control system begins with the creation of appropriate objectives and goals, both long term and short...
1 Pages(250 words)Research Paper
sponsored ads
Save Your Time for More Important Things
Let us write or edit the essay on your topic "LS311 Unit 6: Contracts: Completed - CASE ANANLYSIS" with a personal 20% discount.
GRAB THE BEST PAPER

Let us find you another Essay on topic LS311 Unit 6: Contracts: Completed - CASE ANANLYSIS for FREE!