Comments (0)
Add to wishlistDelete from wishlist
Cite this document
Summary
According to a recent research conducted by Pew Research Center’s Internet and American Life Project in America, seventy-three percent of adults prefer to communicate via test message instead of voice call on their mobile phone. Moreover, eighty-three percent of the adults in…
Download full paperFile format: .doc, available for editing
HIDE THIS PAPERGRAB THE BEST PAPER94.3% of users find it useful 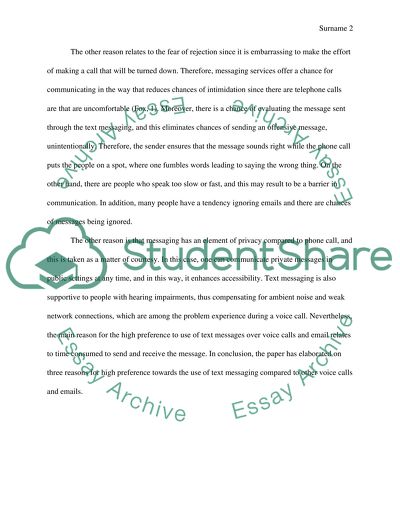 Essay Cause/Effect According to a recent research conducted by Pew Research Center’s Internet and American Life Project in America, seventy-three percent of adults prefer to communicate via test message instead of voice call on their mobile phone. Moreover, eighty-three percent of the adults in America possess a mobile phone, though the medium of communication depends with situation. It is intriguing to learn that fifty five percent of people who use text messages can exchange up to fifty messages on a daily basis, thus they prefer texting to voice calls (Gahran, 1). Therefore, the paper will focus on identifying three reasons for the high preference of text messaging services compared to voice calls or sending e-mails.
One of the reasons is the simplicity, whereby people find the ease in communicating intelligible things like setting a meeting, and sending a text message through the phone takes less time and effort compared to phone calls and emails. In fact, numerous people are intensely busy during the day and they may not find time to hold a phone conversation; thus, they prefer sending a text message that takes less than minutes. On the other hand, there is pressure involved in coming up with a plan on the way to communicate while the text messaging gives time to think on the message to send. Furthermore, people prefer text messaging to emails due to flexibility, whereby no everyone uses Smartphone and other devices, which guarantees instant accessibility of mailbox.
The other reason relates to the fear of rejection since it is embarrassing to make the effort of making a call that will be turned down. Therefore, messaging services offer a chance for communicating in the way that reduces chances of intimidation since there are telephone calls are that are uncomfortable (Fox, 1). Moreover, there is a chance of evaluating the message sent through the text messaging, and this eliminates chances of sending an offensive message, unintentionally. Therefore, the sender ensures that the message sounds right while the phone call puts the people on a spot, where one fumbles words leading to saying the wrong thing. On the other hand, there are people who speak too slow or fast, and this may result to be a barrier in communication. In addition, many people have a tendency ignoring emails and there are chances of messages being ignored.
The other reason is that messaging has an element of privacy compared to phone call, and this is taken as a matter of courtesy. In this case, one can communicate private messages in public settings at any time, and in this way, it enhances accessibility. Text messaging is also supportive to people with hearing impairments, thus compensating for ambient noise and weak network connections, which are among the problem experience during a voice call. Nevertheless, the main reason for the high preference to use of text messages over voice calls and email relates to time consumed to send and receive the message. In conclusion, the paper has elaborated on three reasons for high preference towards the use of text messaging compared to other voice calls and emails.
Works Cited
Gahran Amy. One-third of Americans prefer texts to voice calls. September 22, 2011. CNN Tech. Available online at:http://articles.cnn.com/2011-09-22/tech/tech_mobile_americans-prefer-text-messages_1_text-messaging-cell-voice?_s=PM:TECH[Accessed on November 2012]
Fox Zoe. 31% of U.S. Adults Prefer to Be Reached by Text Message [STUDY]. Mashable Tech. September 19, 2011. Available online at: http://mashable.com/2011/09/19/31-of-u-s-adults-prefer-to-be-reached-by-text-message-study/[Accessed on November 2012]   Read More
Share:
Tags
Cite this document
(“Cause/Effect Essay Example | Topics and Well Written Essays - 500 words”, n.d.)
Retrieved from https://studentshare.org/miscellaneous/1608914-causeeffect

CHECK THESE SAMPLES OF Cause/Effect

Cause and effect: mother drinking alcohol during pregnancy

The math behind the Pendulum

..., television sets, computer monitors, refrigerators, and other electronic communication devices. Poor disposal of e-wastes poses several risks to human health and degrades environmental quality as they contain noxious metallic elements known to cause serious health complications. When the wastes are buried in landfills, toxic constituents can infiltrate into water systems and the soil, and finally reach our bodies. Should we sacrifice ourselves for the sake of technology? There has been a growing call for industry players to effect proper disposal of e-wastes, or to find alternative uses of the wastes, such as recycling and separating the components of the electronic devices for use in various industrial...
4 Pages(1000 words)Essay

...Outline Introduction 2. What Is the Collective Bargaining Agreement? 3. The Lost Sports Season 4. The Economic Cost of Labor Strikes in Sports 5. The Need for Salary Caps 6. Conclusion 7. Works Cited The Cause and Effect of Labor Strike in Sports The businesses of the world rely on a constant flurry of activity and exchange of monetary considerations in order to remain effective and beneficial to all the parties concerned. In order to keep the money machine rolling, certain concessions and agreements must be reached by the business managers / owners and its employees / players. Parties agree that there is a need for equal sharing of the profits realized by the enterprises and endeavors that the employees participate in.However... , there are...
4 Pages(1000 words)Essay

...Cause & Effect of poverty Poverty is available all over the world both in first world and third world countries such as United States of America and Somalia respectively. Poverty is an exceptionally complicated social problem and some theorists believe that the poor cause their own poverty while others feel that poverty has several causes of which some are basic such as overpopulation, inadequate jobs and inability to get enough food. Poverty has many definitions and a poor person may be said to be someone who cannot satisfy his or her necessary needs such as food and shelter as well as inability to pay bills without strain due to insufficient income. The main reason for...
2 Pages(500 words)Essay

...Arab Spring: Cause and Effect How the Arab Spring has failed to liberate the Arab World For many years, the Arab world has been under brutal conflicts with some degenerating into civil war. Although North Africa had had its fair share of revolt, the Middle East is undoubtedly the epicentre of Arab strife that has spilled over to many states that are not Islamic. In Africa, Libya, Egypt, Sudan, Morocco, and Algeria have all had a tethered past marred by civil strife and terrorism. Perhaps the propensity to revolutions and religious extremism that has rocked the Middle East for years has left more damage than the benefits it has brought (The Economist, 2014). In as much the Arab Spring has brought some...
1 Pages(250 words)Essay

Gender and Work in Sociology

...The Effects of Certain Forms of Technology on Reading Skills or Reading Habits Introduction Reading can be referred as the oldest habit since human became civilized (Miedema, 2009). Majority of the greatest personalities in the world are known to have a passion for reading. The oldest documentary for reading was the manuscript. However, it was limited to only the elite class in the society. Later on, Gutenberg printing press was established, and its establishment ended the discrimination that was evident earlier on. Since then, there has been an important step that has been taken to come up with the reading society we have today. Despite that, the emergence of other technologies they have significantly attributed to the change... of the...
4 Pages(1000 words)Essay
sponsored ads
Save Your Time for More Important Things
Let us write or edit the essay on your topic "Cause/Effect" with a personal 20% discount.
GRAB THE BEST PAPER

Let us find you another Essay on topic Cause/Effect for FREE!