Any topc about flying by Olga Mukhina - Essay Example

Comments (0)
Add to wishlistDelete from wishlist
Cite this document
Summary
Olga Mukhina’s documentary play entitled “Flying” and translated by John Freedman proved to be a controversial and challenging literary discourse that delved into trying to peer into the lives of young adults who profess insights that are unconventional; yet comprehensibly…
Download full paperFile format: .doc, available for editing
HIDE THIS PAPERGRAB THE BEST PAPER97.9% of users find it useful 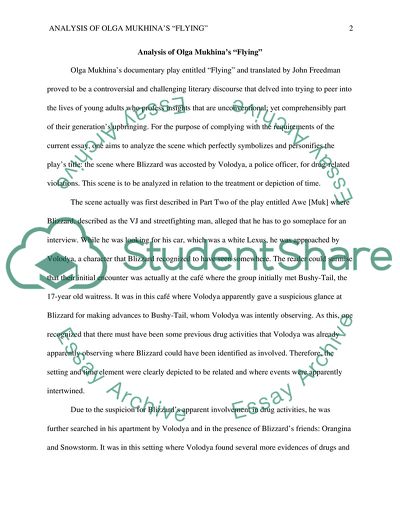 Extract of sample "Any topc about flying by Olga Mukhina"

Analysis of Olga Mukhina’s “Flying” al Affiliation Analysis of Olga Mukhina’s “Flying” Olga Mukhina’s documentary play en d “Flying” and translated by John Freedman proved to be a controversial and challenging literary discourse that delved into trying to peer into the lives of young adults who profess insights that are unconventional; yet comprehensibly part of their generation’s upbringing. For the purpose of complying with the requirements of the current essay, one aims to analyze the scene which perfectly symbolizes and personifies the play’s title: the scene where Blizzard was accosted by Volodya, a police officer, for drug-related violations. This scene is to be analyzed in relation to the treatment or depiction of time.
The scene actually was first described in Part Two of the play entitled Awe (Mukina, 2004, p. 55) where Blizzard, described as the VJ and streetfighting man, alleged that he has to go someplace for an interview. While he was looking for his car, which was a white Lexus, he was approached by Volodya, a character that Blizzard recognized to have seen somewhere. The reader could surmise that their initial encounter was actually at the café where the group initially met Bushy-Tail, the 17-year old waitress. It was in this café where Volodya apparently gave a suspicious glance at Blizzard for making advances to Bushy-Tail, whom Volodya was intently observing. As this, one recognized that there must have been some previous drug activities that Volodya was already apparently observing where Blizzard could have been identified as involved. Therefore, the setting and time element were clearly depicted to be related and where events were apparently intertwined.
Due to the suspicion for Blizzard’s apparent involvement in drug activities, he was further searched in his apartment by Volodya and in the presence of Blizzard’s friends: Orangina and Snowstorm. It was in this setting where Volodya found several more evidences of drugs and when the opportune time was noted, when the door to the hallway that traversed to Orangina’s apartment was seen, Blizzard evidently rushed outside of the window and it was at this moment that it was described that he was actually flying. The description of that particular moment seemed to be unrealistic since the moment seemed like eternity. The manner by which the event seemed to be prolonged was the author’s style of describing separate events and situations which go back and forth like a broken continuum. It was during Blizzard’s supposed flight when it was likewise vividly narrated that a dog, named Yo-Yo, supposedly observed the incident but failed to immediately and naturally react. When readers would pre-empt that what could have happened was Blizzard’s eminent death, it was therefore surprising that it was the dog that died and Blizzard was able to initially escape; before succumbing to captivity.
The next scene where Blizzard was in jail served as a reflective moment when he eventually realized that there have been many activities and endeavors in life that he supposedly regrets. His final thoughts were of Orangina, his next door neighbor and friend. Despite the unconventional manner by which the writer presented and documented the play, the scene pertaining to Blizzard was apparently clear and memorable. This particular scene effectively symbolized that man thinks in sporadic ways; tending to be reflective of the past and looking forward to the future, all at the same time. In the end, what really matters most is that one gets to spend life with someone – identified to be the interest of one’s love. As aptly averred by Blizzard, he has finally realized that the only thing important in life is love.
Reference
Mukina, O. (2004). Flying. The Mercurian, 31-73. Read More
Share:
Tags
Cite this document
(“Any topc about flying by Olga Mukhina Essay Example | Topics and Well Written Essays - 500 words”, n.d.)
Any topc about flying by Olga Mukhina Essay Example | Topics and Well Written Essays - 500 words. Retrieved from https://studentshare.org/miscellaneous/1608482-any-topc-about-flying-by-olga-mukhina

CHECK THESE SAMPLES OF Any topc about flying by Olga Mukhina

...? Flying the flags Table of Contents Introduction 3 Review of the EU Airline industry 4 BA Iberia merger 7 Implications of the merger (Benefits and Costs for the Airline industry's main stakeholders) 8 Conclusion 11 Reference 13 Introduction Airline industry constitutes one of the most significant industry segments of the world. The airline industry in Europe was badly hit by the recent financial meltdown. The importance of air travel became much more evident following the needs of organizations to ensure faster travelling of executives from one place to another. The importance of airlines industry can also be analyzed from the fact that it has a significant contribution towards the economic growth of the region. The...
9 Pages(2250 words)Essay

What are effective treatment strategies in early onset dementia

A topic about any scienes

...in which chlorine has spilled in factories have also been unknowingly mixed with other chemicals. Undoubtedly, thousands of people have been in at risk for exposing to this reaction and have been evacuated to address the issue. The worst incident occurred in 2005, when the crash of 18 freight trains occurred, exposing chlorine gas to a whole community in which 9 people were killed and at least 1400 were exposed to this fatal combination. The worst part about chlorine gas is the fact that it even small exposures can cause choking and wheezing. In addition, it can burn the eyes, skin and throat. The gravity of this issue can be depicted here as Mary Anne Duncan, an epidemiologist at the federal Agency states, “Exposure to...
2 Pages(500 words)Essay

...of Lecturer 12 December, Flying for Peanuts “Flying for Peanuts” may rightly be described as an uncommon type of book. It is a celebration of the achievements of Southwest Airlines, particularly in the area of Customer Service, for more than a generation. Not only is their customer service good, the airline, unlike many of the other existing airlines in the United States of America, has been able to offer their clientele flight at a cost that the average American can afford. The airline company was able to consider many other factors that other airlines have overlooked. It is important to mention that while reading the book, one would learn about Irma, the person who formulated the...
1 Pages(250 words)Book Report/Review

...Flying cheap ‘Profit’ is often the main motive to investors or businesspersons in all sectors of trade. Itis therefore sure that operators within the airline travel sector, just as it is the case with other forms of business try to maximize profits while minimizing on the costs. This informs the plot and storyline depicted by the documentary on flying cheap as written and directed by Rick Young. The movie critically presents a factual documentary on what exactly happened in ill-fated Colgan operated flight that crashed in 2009 outside Buffalo and claimed at least fifty lives. The ‘continental connection flight’ 3407was a commuter flight and is exactly the recreation of the documentary by Young and which...
4 Pages(1000 words)Movie Review

A flying camera or a drone camera

...in the future about what can be done if a drone camera flying high above a crowd of people suddenly fails and collapses to the ground. Concerning the size and weight of these things, such an accident can certainly give someone a head trauma or a bone fracture. Research also claims that “personal drones do have built-in safety features” (Chong). Better construction material and better software is required to makes drones safer. Thousands of planes cross each other in the skies on daily basis, but they do not crash into each other or any other obstacles they may come across. On the other hand, a report claims that recently, a drone “had a close brush with a police helicopter near the...
7 Pages(1750 words)Research Paper

... Summary The software development process/lifecycle is the process of building a good software product of high quality, accurate and correct. In the application development process, the user incorporates the natural human language and it involves two translations. The translations are abstract need statement with detailed implementation and natural language to CPU instructions (Systems Architecture Sixth Edition Chapter 10 5). Further, a good software development process should involve design models and system requirement models. Another important aspect is the methodology which involves tools useful for automation of the development tasks. However, proper tool selection is a critical and a difficult undertaking. The methodology... Summary...
1 Pages(250 words)Coursework
sponsored ads
Save Your Time for More Important Things
Let us write or edit the essay on your topic "Any topc about flying by Olga Mukhina" with a personal 20% discount.
GRAB THE BEST PAPER

Let us find you another Essay on topic Any topc about flying by Olga Mukhina for FREE!