Comments (0)
Add to wishlistDelete from wishlist
Cite this document
Summary
The ‘Broken Window’ symbolizes the breakdown of the informal controls which regulate public behavior. By maintaining public order, the police can apply this…
Download full paperFile format: .doc, available for editing
HIDE THIS PAPERGRAB THE BEST PAPER94.2% of users find it useful 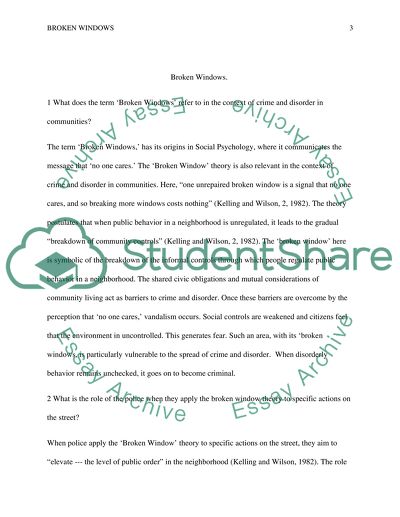 Broken Windows The ‘Broken-Window’ theory postulates that public disorder is the slippery slope which leads to serious crime. The ‘Broken Window’ symbolizes the breakdown of the informal controls which regulate public behavior. By maintaining public order, the police can apply this approach to prevent crime.
Broken Windows.
1 What does the term ‘Broken Windows’ refer to in the context of crime and disorder in communities?
The term ‘Broken Windows,’ has its origins in Social Psychology, where it communicates the message that ‘no one cares.’ The ‘Broken Window’ theory is also relevant in the context of crime and disorder in communities. Here, “one unrepaired broken window is a signal that no one cares, and so breaking more windows costs nothing” (Kelling and Wilson, 2, 1982). The theory postulates that when public behavior in a neighborhood is unregulated, it leads to the gradual “breakdown of community controls” (Kelling and Wilson, 2, 1982). The ‘broken window’ here is symbolic of the breakdown of the informal controls through which people regulate public behavior in a neighborhood. The shared civic obligations and mutual considerations of community living act as barriers to crime and disorder. Once these barriers are overcome by the perception that ‘no one cares,’ vandalism occurs. Social controls are weakened and citizens feel that the environment in uncontrolled. This generates fear. Such an area, with its ‘broken windows, is particularly vulnerable to the spread of crime and disorder.  When disorderly behavior remains unchecked, it goes on to become criminal.
2 What is the role of the police when they apply the broken window theory to specific actions on the street?
When police apply the ‘Broken Window’ theory to specific actions on the street, they aim to “elevate --- the level of public order” in the neighborhood (Kelling and Wilson, 1982). The role of the police is to maintain order. It is acknowledged that disorder and crime are interconnected in a community. The police’s role is founded on this link between order-maintenance and crime-prevention. Their role is based on the premise that “serious street crime flourishes in areas in which disorderly behavior goes unchecked” (Kelling and Wilson, 2, 1982). It is a reflection of the police’s role in earlier periods, when the main responsibility of the police was to maintain order. Actions such as keeping drinking away from the main intersections, questioning strange loiterers, preventing panhandlers and vagrants from bothering pedestrians and begging at bus-stops, keeping noisy teenagers in check, and settling disputes between customers and businessmen are geared towards the maintenance of public order. Arresting a single drunk or vagrant acts as a deterrent to thousands of others, and conveys the message that the police are actively involved in maintaining order in the neighborhood. The unchecked drunk is the first ‘broken window.”
3 Are so called ‘Broken Windows’ something that police officers can address alone?
The ‘Broken Windows’ approach works best if the local community cooperates with the police officer on the beat. The officer makes himself familiar with the ‘regulars’ on the street and formulates certain regulations which are tailored to that particular locality. The ‘Broken-windows’ approach has the greatest chances of success when these rules are “defined and enforced in collaboration with the "regulars" on the street” (Kelling and Wilson, 1, 1982). The expected level of public order is expressed by the people. Community relations are an important aspect of this approach. The patrolling officer is accessible and is positioned to reinforce “the informal control mechanism of the community itself” (Kelling and Wilson, 2, 1982). However, the final burden of maintaining order falls on the police, as individual citizens do not accept personal responsibility for the security of the community.
References.
Kelling, George L. and Wilson, James Q. (March, 1982). Broken Windows. Atlantic Magazine.
Retrieved from
http://www.theatlantic.com/magazine/archive/1982/03/broken-windows/304465/ Read More
Share:
Tags
Cite this document
(“Broken Windows Essay Example | Topics and Well Written Essays - 500 words”, n.d.)
Broken Windows Essay Example | Topics and Well Written Essays - 500 words. Retrieved from https://studentshare.org/miscellaneous/1607470-broken-windows

CHECK THESE SAMPLES OF Broken Windows

...? Using more community service combined with probation we can eliminate the "broken windows theory" submission Table of Contents Abstract 3 Imagine that you are living in a neighbourhood that is littered, with walls covered with graffiti and streets parked with unreturned shopping carts. Would the scene around you result in more litters, theft or even trespass and other criminal acts? The theory proposes that indications of disorder and minor criminal behaviour elicit more disorderly and trivial lawlessness, therefore leading to spread of the behaviour. This may result in moral decay and deterioration of the quality of life of residents in these neighbourhoods. This may be a key policy issue for city...
18 Pages(4500 words)Research Paper

A critique on Wilson and Kelling, entitled 'Broken Windows'

...﻿Broken Windows Theory The broken windows theory is a concept established to explain how serious crimes occur after a cycle of activities, from minor issues that are left unattended early in their development. The theorists used the broken window, as a representation of a minute disorder that often needs to be fixed after its detection to avoid more related harm. Typically, assuming a window is broken in a neighbourhood occupied by people, there is the tendency that some people will think the house is abandoned or unmaintained. From that point, some would want to peep inside, others would delight in more damages to the rest of the windows; hence, if a principled individual had passed by it and noticed the difference over time... , they will...
7 Pages(1750 words)Essay

...? The biblical allusions and echoes in Hart Crane's "the broken tower" Biblical allusions and echoes are use to make indirect reference to the Bible. This requires that the writer is well familiar with the entire Bible or a portion of it. These allusions and echoes are used to pass out the hidden meaning of the words in the Bible. Some of the commonly used allusions in the Bible are “The Grapes of Wrath” used by John Steinbeck and “He slayed his Goliath” used to refer to the story of Goliath and David in the Bible. Crane’s poetry manifested a lot of treats of death and rebirth of love (Hazo, 1963). The modern perfection of death showed a lot of impossibilities in motion while having some resurrection of some kind though...
7 Pages(1750 words)Research Paper

...? Broken Bones The paper emphasized on the factors commonly accountable for fracture and broken bones. It has been identified that there areseveral health related and other factors responsible for broken bones such as calcium deficiency and osteoporosis. Correspondingly, the findings of the study suggest that appropriate treatment and mediatisation should be offered to individuals having heath issues such as osteoporosis to mitigate the risk of broken bones. Broken Bones Bones are living tissues forming the skeletal frame of the body and supporting the body to execute daily activities, which include work, play and exercise. Bones are flexible as well as...
3 Pages(750 words)Essay

...A Study on impact of Broken Windows Style Policing Using APA Style -- By R.Subba Rayudu Study Objective: To conduct an empirical analysis on the impact of Broken Windows style policing efforts by Police to control physical and social disorder. Abstract: To study the impact of Order policing approach used in the name "broken window policing". To conduct the study appropriate research methods were adopted. The process consists of choosing appropriate sample of adequate size and nature, identification and declaration of necessary variables for the study, defining the hypothesis, selection, collection and analysis of data, findings and...
4 Pages(1000 words)Research Proposal

...Essay In the article ‘There are no cracks in the broken windows’, the Bratton and Kelling strongly put forth the view that when police officials bring smaller offences under control, it can automatically result in serious crime reduction. This theory which has been officially referred to as the ‘broken window’ theory has faced severe criticism from scholars and other academics who believe that crime rate cannot be reduced through such practices. According to them crime is a result of economic inequality, racism and poverty and hence cutting down small crime rates would not see as reduction in larger crimes. But however factual reports and research show that the...
2 Pages(500 words)Essay

...A Summary and Critique on “Broken Windows: The Police and Neighbourhood Safety” The rapid progress of technology in modern society is seen as a giant leap forward in the history of man however, the crime rates are still observed to rise despite the progress in society and culture. This are attributed to various factors such as decreasing involvement of citizens in crime prevention, their over-reliance to law enforcement agencies in preventing crime, the criminalisation of certain actions or behaviour normally deemed harmless individually but could cause disruptions of peace and order when done in throngs, and the simple dissociation of people from their neighbourhoods (Bratton, et al., 1998; Shelden,...
5 Pages(1250 words)Essay

...Broken Windows The “Broken Windows” theory proposes that more serious crimes will come from minor crimes if they are not addressed in the first stages of infractions. In other words, if a window is broken in a building and no one does anything about it, then there will be more broken windows and, consequently, the building will lose all its glassed-in windows (Shelden 2003). 2. The “Broken Windows” theory can be directly applied to those strategic implementations where police maintain a presence in any particular neighborhood, such as in a community which...
2 Pages(500 words)Assignment

...Broken Windows Concept Proponents of the broken windows concept In 1985, George L. Kelling was hired as a consultant to the New York City and David L. Gunn implemented measures to test the broken windows theory. The presence of graffiti keenly targeted, and subway system cleaned in an effort from 1984 until 1990. Department of police Boston and the Los Angeles Police Department have hired Kelling as a consultant. In 1990, William J. Bratton was made the chief head of the New York City Transit Police (Kelling & Wilson, 1982). In 1993 after his election as Mayor of New York City, Republican Ruddy Giuliani used the police commissioner...
1 Pages(250 words)Essay
sponsored ads
Save Your Time for More Important Things
Let us write or edit the essay on your topic "Broken Windows" with a personal 20% discount.
GRAB THE BEST PAPER

Let us find you another Essay on topic Broken Windows for FREE!