Comments (0)
Add to wishlistDelete from wishlist
Cite this document
Summary
Rather, their expectations and desires are rigorously studied by marketers, hyperbolized and sold back to them in a diabolical response circle. The…
Download full paperFile format: .doc, available for editing
HIDE THIS PAPERGRAB THE BEST PAPER95.2% of users find it useful 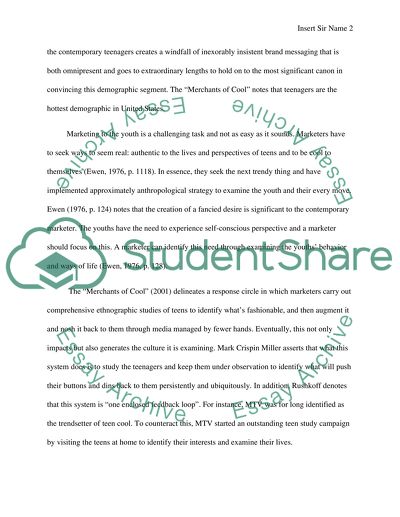 Extract of sample "Merchants of Cool"

Shopping Consumerism Merchants of Cool More than all cohorts in the past, contemporary teenagers and youth are not free to produce a genuine culture for their own. Rather, their expectations and desires are rigorously studied by marketers, hyperbolized and sold back to them in a diabolical response circle. The present day teenagers and youth are independent and have money; their lives are the center of attention by the cooperate America. That is the principle of the PBS Frontline documentary “The Merchants of Cool”, which makes an alarmingly undeniable case for the alteration of teenage culture by its immense commercialization.
This film discovers the contemporary teenagers’ culture and their standpoints on themselves and their parents. In order to target the teenagers, companies explore the teenager’s tastes and preferences, perspectives, and their aspirations to identify what they desire. Needless to say, as according to the film “Merchants of Cool”, companies survey the symbiotic association between the present day teenagers and the media, as they depend on the other for their identity (Merchants of Cool, 2001).
Marketing happens to all people at all time, and no individual is invulnerable from its influence and free from its reach (Ewen, 1976, p. 36). The absolute size and purchasing power of the contemporary teenagers creates a windfall of inexorably insistent brand messaging that is both omnipresent and goes to extraordinary lengths to hold on to the most significant canon in convincing this demographic segment. The “Merchants of Cool” notes that teenagers are the hottest demographic in United States.
Marketing to the youth is a challenging task and not as easy as it sounds. Marketers have to seek ways to seem real: authentic to the lives and perspectives of teens and to be cool to themselves (Ewen, 1976, p. 1118). In essence, they seek the next trendy thing and have implemented approximately anthropological strategy to examine the youth and their every move. Ewen (1976, p. 124) notes that the creation of a fancied desire is significant to the contemporary marketer. The youths have the need to experience self-conscious perspective and a marketer should focus on this. A marketer can identify this need through examining the youths’ behavior and ways of life (Ewen, 1976, p. 128).
The “Merchants of Cool” (2001) delineates a response circle in which marketers carry out comprehensive ethnographic studies of teens to identify what’s fashionable, and then augment it and nosh it back to them through media managed by fewer hands. Eventually, this not only impacts but also generates the culture it is examining. Mark Crispin Miller asserts that what this system does is to study the teenagers and keep them under observation to identify what will push their buttons and dins back to them persistently and ubiquitously. In addition, Rushkoff denotes that this system is “one enclosed feedback loop”. For instance, MTV was for long identified as the trendsetter of teen cool. To counteract this, MTV started an outstanding teen study campaign by visiting the teens at home to identify their interests and examine their lives.
This “Merchants of Cool” film introduces viewers to the “mook”, and the “midriff”, the characters that MTV and other companies have resolved to use in order to attract the teenagers. The “midriff” represents the character hurled to the teenage girls (Merchants of Cool, 2001). This is the highly sexualized and world fatigued pervert character that is highly used in other television films. On the other hand, the “mook” represents the male teenage typified by his rude and immature behavior. In order to attract the teenagers, the companies have to appeal to the two characters such as MTV who generated programs such as spring break’ in order to appeal to the “mook”. This is in line with Horkheimer and Adorno’s concept of the culture industry where an individual is an illusion manipulated by authority.
Works Cited
Ewen, Stuart. Captains of Consciousness: Advertising and the Social Roots of the Consumer Culture. New York: McGraw-Hill, 1976. Print.
Merchant of Cool. "Merchants of Cool." PBS: Public Broadcasting Service. N.p., 2001. Web. 28 Oct. 2012. Read More
Share:
Tags
Cite this document
(“Merchants of Cool Essay Example | Topics and Well Written Essays - 500 words”, n.d.)
Merchants of Cool Essay Example | Topics and Well Written Essays - 500 words. Retrieved from https://studentshare.org/miscellaneous/1606465-merchants-of-cool

CHECK THESE SAMPLES OF Merchants of Cool

...? Merchants of Cool-Movie Review The Merchants of Cool: Movie Review The Merchant of Cool is a documentary film produced by Rachel Dretzin and Barak Goodman. The program basically interviews media executives, marketers, and cultural/media critics and discusses the symbiotic connection between today’s teens and media, as each look for the other for identity. The documentary depicts how big corporations nowadays use mass media to manipulate their audience, especially the teenagers. The movie shows that what do appears as teenage whims arising from the teens themselves are not real but are just mass media gimmicks engineered by company...
3 Pages(750 words)Movie Review

Evaluation of frontline the merchants of cool

...Full Frontline - “The Merchants of Cool” (An Evaluation Essay) 20 January (estimated word count 401) Introduction The power of marketing can be viewed from different perspectives, either as a source of inspiration, influence, and guidance, or in more crude terms, as a form of “brainwashing” in which it tries to mold the minds of viewers, consumers or target market or audience. This is a subtle form of using psychology, often without the subject knowing what really happened to him or her, by using hints or suggestions. The idea is for the target consumers to get hooked on a product or service, whatever that might be. This is the essence of marketing, which is all about attracting the right customers, then...
4 Pages(1000 words)Essay

Jennifer and the Wine Merchants

..., there seems to be a change in younger demographics which essentially overturns traditional gender roles and an increase in marketing education which has made youth buyers become sceptical of advertising and the research process. Therefore, there is definitely room for youths to develop their own style and battle the corporate view of what actually is cool to youth groups. When reviewing the PBS special report The Merchants of Cool, it was at first noticeable, in the lead photograph, that the youth group being displayed in the photos showed evidence of gender role changes which are not common in youth subcultures. The male teenaged individual in the forefront displays the words, J-Lo,...
5 Pages(1250 words)Essay

...What is Cool? The term “cool”, has numerous definitions and can somehow be very confusing the context of its use dictating its meaning (Rice par1). Cool can be in the positive or negative sense, although it is mainly used in the former. Cool, as a principle, for example, means remaining calm even under stress. Yet again, it may mean lack of excitement in the negative sense. The term also means neither warm nor cold according to Free Dictionary (par 1). In this respect, the term may also be used with neither a positively nor negatively connotation. Historically, the term cool had various meanings. Different people had their own way of defining it. To...
5 Pages(1250 words)Essay

... Finance and Accounting, Essay a) The Merchants PLC is a very old investment trust which aims to give the shareholders good income which goes on increasing over the passage of time. The objective of the company is to offer growth in income along with long term growth of capital by making investment in Hungary. There are several demerits in raising fund only locally by a company. It has to raise fund by other methods from outside sources also. The company can raise capital for various reasons depending on the time periods ranging from extremely short to rather long period. The sum quantity of financial requirements of a company depends on the size and nature of the business. The capacity of raising funds depends on the resources... ...
12 Pages(3000 words)Essay

Short Answers on Merchants of Cool

5 Pages(1250 words)Essay
sponsored ads
Save Your Time for More Important Things
Let us write or edit the essay on your topic "Merchants of Cool" with a personal 20% discount.
GRAB THE BEST PAPER

Let us find you another Essay on topic Merchants of Cool for FREE!