Comments (0)
Add to wishlistDelete from wishlist
Cite this document
Summary
The Romans utilized a geometric system and crop rotation to establish farming lands. They maximized land use; however, this resulted into soil depletion. The farmers donated surplus crops to the government…
Download full paperFile format: .doc, available for editing
HIDE THIS PAPERGRAB THE BEST PAPER96.1% of users find it useful 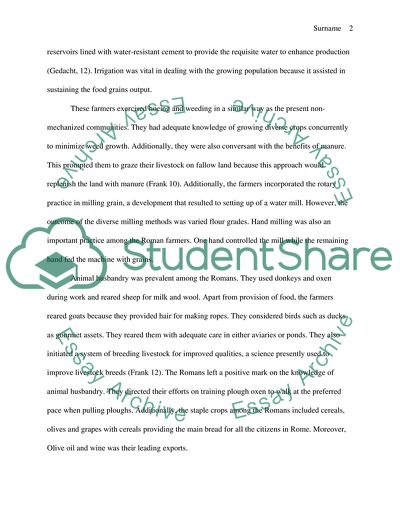 Extract of sample "Human and Animal Interrelationships from Domestication to Present"

Task: 3. Early Agriculture in Ancient Rome Introduction Agriculture contributed to the establishment of a large Empire in Rome. The Romans utilized a geometric system and crop rotation to establish farming lands. They maximized land use; however, this resulted into soil depletion. The farmers donated surplus crops to the government to comply with the monetary tax. This system enabled the rulers to attain popularity from the public because of the free distribution of goods. This facilitated the feeding of the regions without incurring monetary cost.
Agricultural practices in Rome
The wealthy individuals owned large acres of land with peasants providing of labor. Additionally, the roman farmers used various tools for farming. They used the ard to plough the land because it could break the soil into fine particles. According to Gedacht (9) they ploughed the land in right-angled directions to create an even surface. At times, the soil was heavy because it contained roots and vines. This forced the farmers to use heavy oxen to plough the land. During harvesting, they used sickles and scythes. However, they improved the sickle by moving the lever at a slant to the hilt to ensure minimal strain on the arm. Additionally, they developed an animal driven machine that could remove the crop’s head and insert into a container. During the hot climate, irrigation was vital for favorable crop growth. The farmers constructed dams and reservoirs lined with water-resistant cement to provide the requisite water to enhance production (Gedacht, 12). Irrigation was vital in dealing with the growing population because it assisted in sustaining the food grains output.
These farmers exercised hoeing and weeding in a similar way as the present non-mechanized communities. They had adequate knowledge of growing diverse crops concurrently to minimize weed growth. Additionally, they were also conversant with the benefits of manure. This prompted them to graze their livestock on fallow land because this approach would replenish the land with manure (Frank 10). Additionally, the farmers incorporated the rotary practice in milling grain, a development that resulted to setting up of a water mill. However, the outcome of the diverse milling methods was varied flour grades. Hand milling was also an important practice among the Roman farmers. One hand controlled the mill while the remaining hand fed the machine with grains.
Animal husbandry was prevalent among the Romans. They used donkeys and oxen during work and reared sheep for milk and wool. Apart from provision of food, the farmers reared goats because they provided hair for making ropes. They considered birds such as ducks as gourmet assets. They reared them with adequate care in either aviaries or ponds. They also initiated a system of breeding livestock for improved qualities, a science presently used to improve livestock breeds (Frank 12). The Romans left a positive mark on the knowledge of animal husbandry. They directed their efforts on training plough oxen to walk at the preferred pace when pulling ploughs. Additionally, the staple crops among the Romans included cereals, olives and grapes with cereals providing the main bread for all the citizens in Rome. Moreover, Olive oil and wine was their leading exports.

“Human and Animal Interrelationships from Domestication to Present Term Paper”, n.d. https://studentshare.org/miscellaneous/1605485-human-and-animal-interrelationships-from-domestication-to-present.
Comments (0)
Click to create a comment or rate a document

...?Human and Animal Interrelationships from Domestication to Present Harry Potter and the Prisoner of Azkaban by J. K. Rowling INTRODUCTION ‘Harry Potter and the Prisoner of Azkaban’ represents the third novel of Harry Potter series. This novel inculcates adventurous journey of the protagonist Harry Potter and revolves around themes of betrayal and forgiveness. This novel entails the investigation executed by Harry Potter, Ron Weasly and Hermione Granger about the prisoner named Sirius Black who escaped from Azkaban. Sirius Black is believed to be one of the old allies of Lord Voldermort. The story revolves around different animals which...
6 Pages(1500 words)Essay

.... There was a shift in the popular mentality regarding animals, and the bestselling books about animals reflected this shift. These books were more like Adamson’s book in tone and focus – that animals are creatures to be cherished for their qualities, and should not be seen as creatures that should be ours to conquer. This is very evident by the way that Adamson lovingly writes about Elsa’s antics and bonding with her. Chapter 3 - Elsa Goes to the Indian Ocean This chapter was all about Elsa going to the sea with the Adamson’s, and how much she enjoyed frolicking in the water. This chapter basically advances the overall ethos of the book, which is that Elsa was more human...
6 Pages(1500 words)Book Report/Review

...at the bank unsure how they will cross. BigWig is sent to scan ahead. He returns and tells his companions that there is a dog running loose in the woods. This means they may want to expedite their crossing. However, Pipkin and Fiver cannot swim so far. Blackberry discovers a floating board in the water. He suggests that the little ones sit atop it and the rest push them along as they swim. The idea is remarked as quite useful and one they may want to remember in the future (Adams 41-47). The dog’s presents in the woods is a precursor to a human presence. Dogs are not wild animals. They are domestic animals that belong to men. Logically thinking the dog...
5 Pages(1250 words)Essay

...The Call of the Wild This discusses an intriguing storyline told by an animal narrator about the relationship of dogs and humans. The book describes how Buck, and other dogs leave the world of civilization where their owners keep them as pets, to the world of primitivity Although at first Buck serves as a sled dog, he eventually becomes a wild dog, and disappears into the world, where he restarts a new life. The book highlights the relationship between animals and humans. In each chapter, the relationship between humans and the dogs changes. This paper will give a summary and analysis of each chapter. Chapter One In chapter one of the book, the author...
5 Pages(1250 words)Essay

...which was interrelated with land ownership. With evolution, large landowners started acquiring more and more land which further paved way for slavery and economic interdependence amongst various provinces. Due to the varying nature of soil in various provinces of the empire, different kinds of crops were grown. Thus, trade emerged when these provinces started exchanging crop. Furthermore, with trade and interrelationship in terms of trade, enhancement in machinery resulted which further enhanced the crop yield. However, the entire rural lifestyle was surrounded by land ownership and crop yield owned by wealthy families. Works Cited: Johnston, Harold W. The Private Life of the Romans. Chicago: Scott, Foresman and Co,...
4 Pages(1000 words)Term Paper

...Animal Ethics Animal ethics is a term that can be described as the relationship that exists between animals and human beings and how animals ought to be treated with dignity without violating any moral rules or regulations (Beauchamp). Animal ethics is broad and encompasses issues such as animal rights, animal welfare and wildlife conservation. Animal ethics outlines the moral obligation that human beings ought to maintain in ensuring that the rights and welfare of animals are not violated thus ensuring any form of cruelty that is aimed towards...
5 Pages(1250 words)Term Paper

...Human and Animal Interrelationships al Affiliation) Should it matter how animals are housed and treated if they are going to be killed for consumption later? Introduction Statistics shows that approximately 8 billion animals are raised in American homesteads for food each year. The majority of these animals are raised in factory farms. In the US, no federal laws are protecting these animals thus making them the least protected class of animals. Various Non-Governmental Organizations have raised concerns about the treatment of farm animals in factory farms. The American...
7 Pages(1750 words)Essay

1 Pages(250 words)Essay
sponsored ads
Save Your Time for More Important Things
Let us write or edit the term paper on your topic "Human and Animal Interrelationships from Domestication to Present" with a personal 20% discount.
GRAB THE BEST PAPER

Let us find you another Term Paper on topic Human and Animal Interrelationships from Domestication to Present for FREE!