Comments (0)
Add to wishlistDelete from wishlist
Cite this document
Summary
The topic which is the subject of the debate is “Is Forced Ranking an Effective Performance Management Approach?” where Salwa Alharthy and Abdullah Aldosarry support this contention; while Youseef AlThwaiqib and Andrew Yoder are against it. The main points presented by both…
Download full paperFile format: .doc, available for editing
HIDE THIS PAPERGRAB THE BEST PAPER93.7% of users find it useful 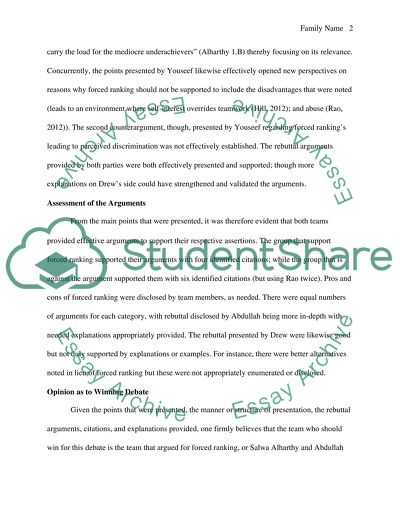 Debate Reaction Paper: Is Forced Ranking an Effective Performance Management Approach? Main Points Presented The topic which is the subject of the debate is “Is Forced Ranking an Effective Performance Management Approach?” where Salwa Alharthy and Abdullah Aldosarry support this contention; while Youseef AlThwaiqib and Andrew Yoder are against it. The main points presented by both parties are summarized below:
Main Points Presented
For Forced Ranking
Against Forced Ranking
Description of forced ranking
Effectively presented by Alharthy
Benefits of forced ranking
Identifies exemplary performers; leads to high morale
Cons of forced ranking
Self-interest over teamwork; leads to discrimination and abuse
Rebuttal arguments
Addresses lack of performance; correlates with total return to shareholders; establishes well defined consequences (rewards and sanctions)
Focus on firing; becoming less popular; presence of other better alternatives; performance should be based on merit and not quotas
It could therefore be deduced that appropriate points were presented by both sides to
establish credibility as to the side they are arguing for or against. The overview provided by Salwa was deemed effective since it presented a description of forced ranking and a counterargument indicating that without it, “the highest performing employees are forced to carry the load for the mediocre underachievers” (Alharthy 1.B) thereby focusing on its relevance. Concurrently, the points presented by Youseef likewise effectively opened new perspectives on reasons why forced ranking should not be supported to include the disadvantages that were noted (leads to an environment where self-interest overrides teamwork (Hill, 2012); and abuse (Rao, 2012)). The second counterargument, though, presented by Youseef regarding forced ranking’s leading to perceived discrimination was not effectively established. The rebuttal arguments provided by both parties were both effectively presented and supported; though more explanations on Drew’s side could have strengthened and validated the arguments.
Assessment of the Arguments
From the main points that were presented, it was therefore evident that both teams
provided effective arguments to support their respective assertions. The group that support forced ranking supported their arguments with four identified citations; while the group that is against the argument supported them with six identified citations (but using Rao twice). Pros and cons of forced ranking were disclosed by team members, as needed. There were equal numbers of arguments for each category, with rebuttal disclosed by Abdullah being more in-depth with needed explanations appropriately provided. The rebuttal presented by Drew were likewise good but not duly supported by explanations or examples. For instance, there were better alternatives noted in lieu of forced ranking but these were not appropriately enumerated or disclosed.
Opinion as to Winning Debate
Given the points that were presented, the manner or structure of presentation, the rebuttal arguments, citations, and explanations provided, one firmly believes that the team who should win for this debate is the team that argued for forced ranking, or Salwa Alharthy and Abdullah Aldosarry’s team. More credible and validated arguments were presented with the use of support from justifiable references. More explanations were also indicated to assist in understanding why the arguments validly support their contentions. Read More
Share:
Tags
Cite this document
(“Debate Reaction Paper / for management class Essay”, n.d.)
Debate Reaction Paper / for management class Essay. Retrieved from https://studentshare.org/miscellaneous/1605215-debate-reaction-paper-for-management-class

CHECK THESE SAMPLES OF Debate Reaction Paper / for management class

...?Same-Sex Marriages Should Not Be Allowed in Canada Same-sex marriage is a term that is globally used for a marriage between two people that belong to the same gender biologically that is socially recognized. Majority of the people use the term “gay marriage” for this. Canada is one of the countries in which same-sex marriage has been legalized. Other countries that have legalized same-sex marriages include Netherlands, Spain, Sweden, and Belgium. This has spurred debate on whether same-sex marriages should or should not be banned and the debate has not reached any conclusion to date. Same-sex marriages raise a lot of issues in the society when analyzed particularly from the sociological perspective. Many...
5 Pages(1250 words)Assignment

.... As Shaw (2010) indicates, fairness is an ethical theory that requires the treatment of all parties equally. In this case, customer’s age, income earnings, class and proximity to the store do not count. After all, the current location of the Food Store is far away from some customers and prospects. Besides, at any given time, not all stores can be closer to all the members of a society. In light of fairness, it would be fair for all stakeholders to continue enjoying the existence of the company. Lastly, common good is as ethical principle that supports the closure of Food Mart Stores in Stone Hill neighborhood. This theory attempts to foster the common values that all the stakeholders are set to enjoy should the...
4 Pages(1000 words)Essay

... Debate Reaction Paper The reaction paper on the debate presented by team 3 on the topic “Are Personality Tests Good Predictors of Employee Performance?” is hereby presented to comment as well as assess the main points that were covered by the team members from contending arguments and to relay one’s personal opinion as to which side won the debate. Two members, Gregory (Clay) Gordon and Miguel Alvarado argued that personality tests are good predictors of employee performance (YES). On the contrary, Samantha Adams and Alonzo Quinonez contented that personality tests are not good predictors of employee performance (NO). Assessment of Arguments Upon closer evaluation of both arguments, it is hereby deduced that the criteria needed... to...
2 Pages(500 words)Research Paper

...cases may have been responsible for their offences. They include crisis intervention strategies, program or treatment evaluation, sex offender and substance abuse treatment and anger management. They ensure that at the end of the time, the offender leaves prison a reformed person, looking at life with a different perspective. The prison system also has a Prisoner Education and Training Unit (PEaT), which provides education and vocational training to prisoners (Department of Justice, 2013). Besides working through its own educators, it also coordinates with external service providers such as polytechnics and other registered training organizations. The unit oversees the tutor scheme through relevant media. The Department...
1 Pages(250 words)Essay

.... There are two main sociological views, one is conflict perspective proposed by Karl Marx and Elite theory perspective proposed by Wright Will. These theories state that inequality of power distribution in society lead ruling class with more power over others which give rise to conflicts therefore, that must be resolved in order to get a desired or successful outcome. These theories are discussed in the paper with specific reference to online businesses. Conflict Perspective of Karl Marx: This theory was proposed by Karl Marx. This perspective is mainly concern of certain factors such as, unseen power within the capital system, discrimination in societies, all classes that exist in the...
5 Pages(1250 words)Essay
sponsored ads
Save Your Time for More Important Things
Let us write or edit the essay on your topic "Debate Reaction Paper / for management class" with a personal 20% discount.
GRAB THE BEST PAPER

Let us find you another Essay on topic Debate Reaction Paper / for management class for FREE!