Compare the great depression and to the great recession - Essay Example

Comments (0)
Add to wishlistDelete from wishlist
Cite this document
Summary
Interestingly, both economic crises share several variables. Hence, it is imperative to study the factors that caused and prolonged the…
Download full paperFile format: .doc, available for editing
HIDE THIS PAPERGRAB THE BEST PAPER97.9% of users find it useful 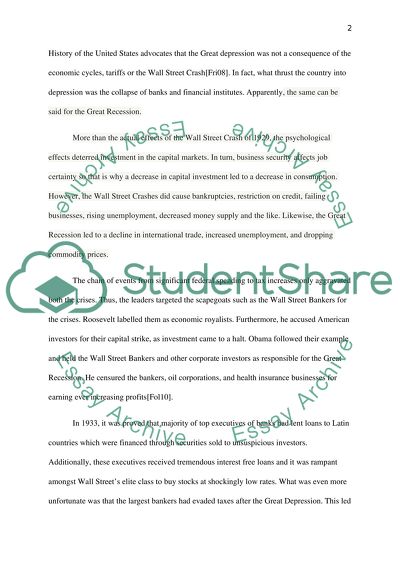 Essay 26 September Comparison of the Great Depression to the Great Recession Undeniably, the Great Recession is the most significant economic disaster to hit the American and global economies after the Great Depression. Interestingly, both economic crises share several variables. Hence, it is imperative to study the factors that caused and prolonged the Great Depression, in order for a quick recovery from the Great Recession. In addition, the former claim that only developing nations suffer from economic crises has proven false in the face of actual events. Therefore, it is integral to realize, that no economic model can so far save us from financial instabilities (Samuelson).
After the speculative boom of the 1920’s, Americans invested great amounts in the stock market. However, these were primarily financed through loans and almost two-third of the nominal value of stocks was represented by loans in 1929. Accelerated share prices motivated greater investment as people speculated that share prices would continue to escalate. Consequently, an economic bubble developed and the margin buying meant that investors would incur great losses if the market took a downturn. Similarly, the Great Recession resulted from speculation about mortgages and securities. It was a consequence of providing loans for homeownership to uncredit-worthy people. Mortgage loans were secured with mortgaged securities; so because of margin buying, banks were on the verge of bankruptcy when the market went into recession. Milton Friedman in his book, A Monetary History of the United States advocates that the Great depression was not a consequence of the economic cycles, tariffs or the Wall Street Crash (Friedman and Schwartz). In fact, what thrust the country into depression was the collapse of banks and financial institutes. Apparently, the same can be said for the Great Recession.
More than the actual effects of the Wall Street Crash of 1929, the psychological effects deterred investment in the capital markets. In turn, business security affects job certainty so that is why a decrease in capital investment led to a decrease in consumption. However, the Wall Street Crashes did cause bankruptcies, restriction on credit, failing businesses, rising unemployment, decreased money supply and the like. Likewise, the Great Recession led to a decline in international trade, increased unemployment, and dropping commodity prices.
The chain of events from significant federal spending to tax increases only aggravated both the crises. Thus, the leaders targeted the scapegoats such as the Wall Street Bankers for the crises. Roosevelt labelled them as economic royalists. Furthermore, he accused American investors for their capital strike, as investment came to a halt. Obama followed their example and held the Wall Street Bankers and other corporate investors as responsible for the Great Recession. He censured the bankers, oil corporations, and health insurance businesses for earning ever increasing profits (Folsom).
In 1933, it was proved that majority of top executives of banks had lent loans to Latin countries which were financed through securities sold to unsuspicious investors. Additionally, these executives received tremendous interest free loans and it was rampant amongst Wall Street’s elite class to buy stocks at shockingly low rates. What was even more unfortunate was that the largest bankers had evaded taxes after the Great Depression. This led to the implementation of Glass-Stegall Act that separated commercial and investment banking. Unfortunately, economists believe that the Great Recession occurred due to returning to those unfettered financial policies combined with partial implantation of Glass Stegall Act. Therefore, Wall Street’s role seems overstated in both the crisis (Woolner).
Although, the underlying causes for both economic crisis appear similar yet fundamental dissimilarities exist. For instance, US dollar based on gold reserves in the 1930’s is opposed to the free-floating currency of today. The Great Recession led to volatility in the gold market; in contrast, gold market was relatively steady during the Great Depression. Moreover, the Great Depression ensued in deflation whereas the Great Recession has resulted in inflation. Largely, the global financial organizations recovered much quickly after the Great Depression in contrast to the Great Recession. Now, the economy has set into a liquidity trap where monetary reforms have failed in the recovery of the economy. Furthermore, the Dow Jones Industrial Average, consumer price index, and unemployment rates also vary between the periods of 1930s and today. Despite the volatile fluctuations during the past few years, there have not been any record-breaking drops matched with 1930’s when DJIA fell by 8.4%.
Works Cited
Folsom, Burton W. “Comparing the Great Depression to the Great Recession.” The Freeman ideas on liberty (2010). Print.
Friedman, Milton and Anna Jacobson Schwartz. A Monetary History of the United States, 1867-1960. New York: Princeton University Press, 2008. Print.
Samuelson, Robert J. “Rethinking the Great Recession.” The Wilson Quarterly surveying the world of ideas December 2011.Print.
Woolner, David. “The Senate’s Dimon Hearing Was Sadly No Pecora Commission.” June 2012. Next New Deal The Blog of Roosevelt Institute. Thursday September 2012 . Web. Read More
Share:
Tags
Cite this document
(“Compare the great depression and to the great recession Essay”, n.d.)
Retrieved from https://studentshare.org/miscellaneous/1603973-compare-the-great-depression-and-to-the-great-recession

(Compare the Great Depression and to the Great Recession Essay)
https://studentshare.org/miscellaneous/1603973-compare-the-great-depression-and-to-the-great-recession.

“Compare the Great Depression and to the Great Recession Essay”, n.d. https://studentshare.org/miscellaneous/1603973-compare-the-great-depression-and-to-the-great-recession.
Comments (0)
Click to create a comment or rate a document

...? (Your How did the federal government respond to the challenges of the Great Depression? Before the great depression, the American economy was flourishing. During 1929 the value of New York Stock Exchange had almost tripled as compared to its value during 1925. The positive state of the American economy can be identified by the following statement of President Herbert Hover: “In America today, we are nearer a final triumph over poverty than is any other land” (p. 114). During this time period, various economists stated that the stock market was overpriced and the rates of company stocks were more than their actual value. Investors ignored warning until...
4 Pages(1000 words)Admission/Application Essay

Compare and Contrast the Great Depression with the Recent Great Recession

Compare great depression with the last recession of 2008-2009

...lost their jobs, not forgetting that the greatest number of women were housewives. Finding other options for survival proved difficult compared to today, because the presence of insurance mechanism had not gained roots to shield them from poverty, diseases, and unemployment issues. Fig.1. “About the Great Depression.” n.d. Web. 4 December, 2012 The 2008/2009 recession still remains a shocking event in the developing and European countries. As the global economy contracted, the citizens’ income flow declined and nations experienced a shortage in jobs. The household expenses had to be cut back to cope with the rising prices of commodities. The recession...
6 Pages(1500 words)Term Paper

...Macro & Micro Economics 24 November Great Recession/Great Depression Introduction In any business economy, the rate of economic activity depends on periodic fluctuations, which in terms of business, are referred to as the business cycle. The measure of trend of these periodic fluctuations is measured in terms of the levels of employment and production. When the measure indicates a down trend, then it is referred to as recession. This downward trend causes a decline in the spending of households. When handling a recession, one can trace the output to a reduction in purchases of durable goods, machines, and the necessary business...
5 Pages(1250 words)Essay

...The Great Depression Introduction From the around the 1930 to the 1940, almost a decade before World War 2, a great economic depression, known as the Great Depression, was experienced. It was the longest, widest, and deepest depression ever of the twentieth century. Although it had its origin in the United States of America, it spread to the other parts of the globe. It began in the month of September 1929 in the US, after a devastating fall in the stock market prices. In the first six months of 1930, government and businesses spent more than they had in the previous six months. The citizens, on the other hand, cut down...
5 Pages(1250 words)Essay

Compare and contrast the great depression and todays great recession

How does the current financial crisis (Great Recession) compare with the Great Depression of the 1930's In this context, compare and contrast the role of the Federal Reserve. Compare the USA scenario and its policy response with at least one more co

..., the international trade nosedived by more than 50%, unemployment rate in United states increased by 25% ( Gunderson 54). In trying to draw parallel and to exclusively compare the great depression and the great recession of 2008, it is important to recognize and accept that the world of 1930 and the world today are radically different. For instance there is a substantial difference in the US economy of today and that of 1930. The difference can be seen from what people eat, wear and the means they go to work. However, we can use the currency for instance the US dollar in our comparison. When we compare the value of goods or the prices...
5 Pages(1250 words)Essay

Comparing the Great Depression to the Great Recession

...Yu Chen Smith Econ 314 November 24, Comparing the Great Depression to the Great Recession Introduction The 2008-2009 recessions awakened a great debate on its relations to the 1930s great depression. The great depression that began 1929 and led to the stock market crash and, on the other hand, the great recession that lead to the global crisis of that began in 2007 were the biggest economic crises that the world has ever experienced (Navarro, 64). The breadth and depth of the both crises and in particular the suffering...
14 Pages(3500 words)Essay

...CONSEQUENCES OF ‘DIRTY THIRTIES’ IN CANADA The great depression was a breaking and recession of the economy that beganon 29th October, 1929 caused by a crash in the stock markets1. It started in the United States but affected Canada and other European countries and other parts of the world. It ran for almost a decade and caused political instability loss of employment, poverty and increased hunger. The effect of depression: Individuals: Although the depression was experienced in all parts of Canada, it was hard in the West region, (Saskatchewan and Alberta). Droughts occurred due to lack of rainfall and all crops dried away. It led to lower production of...
1 Pages(250 words)Thesis

10 Pages(2500 words)Essay
sponsored ads
Save Your Time for More Important Things
Let us write or edit the essay on your topic "Compare the great depression and to the great recession" with a personal 20% discount.
GRAB THE BEST PAPER

Let us find you another Essay on topic Compare the great depression and to the great recession for FREE!