Comments (0)
Add to wishlistDelete from wishlist
Cite this document
Summary
It stipulates legally acceptable and unacceptable behavior and offers avenues for legal redress against breach of parties’ legal right or freedom. Business law is a branch of law that…
Download full paperFile format: .doc, available for editing
HIDE THIS PAPERGRAB THE BEST PAPER95.8% of users find it useful 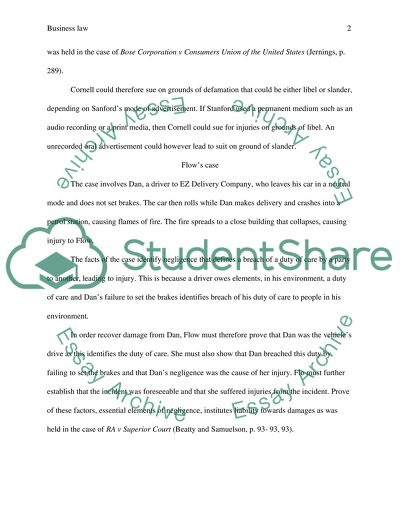 Business law Law defines a set of rules that regulate behavior among parties within a jurisdiction. It stipulates legally acceptable and unacceptablebehavior and offers avenues for legal redress against breach of parties’ legal right or freedom. Business law is a branch of law that regulates interactions within business environments. This paper explores cases in business law to identify possible legal liabilities their essential elements.
Stamford Engineering Inc and Cornell Code Corporations’ case
In the case, Stanford made an advertisement alleging that Cornell, a competing firm, does not test its products but instead let its consumers test the company’s software through using it. This accusation is not true and causes Cornell to lose its customers to Stanford.
The issue to be determined is whether Stanford’s allegation constituted sufficient ground for a suit on defamation.
The legal definition of defamation involves false accusation against a person, which has a potential of adversely affecting the victim’s reputation or competitive advantage in trade. In order to establish a case on defamation’s basis, the plaintiff must prove a number of essential elements. First, the plaintiff must have been subjected to a “defamatory statement” (Beatty and Samuelson, p. 78). The statement must have been false and the defendant must have communicated the statement leading to injury on the plaintiff. Defamation can be either slander or libel (Beatty and Samuelson, p. 78).
In the case, Stanford made an advertisement whose claim was defamatory. The claim was false and caused Cornell its customers who went to Stanford’s business, thereby causing financial losses, in revenues and profits, to Cornell. This forms a legal ground for defamation as was held in the case of Bose Corporation v Consumers Union of the United States (Jernings, p. 289).
Cornell could therefore sue on grounds of defamation that could be either libel or slander, depending on Sanford’s mode of advertisement. If Stanford used a permanent medium such as an audio recording or a print media, then Cornell could sue for injuries on grounds of libel. An unrecorded oral advertisement could however lead to suit on ground of slander.
Flow’s case
The case involves Dan, a driver to EZ Delivery Company, who leaves his car in a neutral mode and does not set brakes. The car then rolls while Dan makes delivery and crashes into a petrol station, causing flames of fire. The fire spreads to a close building that collapses, causing injury to Flow.
The facts of the case identify negligence that defines a breach of a duty of care by a party to another, leading to injury. This is because a driver owes elements, in his environment, a duty of care and Dan’s failure to set the brakes identifies breach of his duty of care to people in his environment.
In order recover damage from Dan, Flow must therefore prove that Dan was the vehicle’s drive as this identifies the duty of care. She must also show that Dan breached this duty by failing to set the brakes and that Dan’s negligence was the cause of her injury. Flo must further establish that the incident was foreseeable and that she suffered injuries from the incident. Prove of these factors, essential elements of negligence, institutes liability towards damages as was held in the case of RA v Superior Court (Beatty and Samuelson, p. 93- 93, 93).
Works cited
Beatty, Jeffrey, and Samuelson, Susan. Introduction to business law. Mason, OH: Cengage Learning, 2012. Print.
Jennings, Marianne. Business: Its legal, ethical, and global environment. Mason, OH: Cengage Learning, 2010, print. Read More
Share:
Tags
Cite this document
(“Busniss law Essay Example | Topics and Well Written Essays - 500 words”, n.d.)
Busniss law Essay Example | Topics and Well Written Essays - 500 words. Retrieved from https://studentshare.org/miscellaneous/1603858-busniss-law

CHECK THESE SAMPLES OF Busniss law

...? (a) Before the war, A had lent money to Cee Company. B now claims that it is en d to half of that money. B is en d to some amount of that money since at the time the contract was signed it was one country. However the amount of money it will receive is dependent on the location of Cee Company and whether its operations lie in country A, B or somewhere between the two. The motives behind the loan must also be assessed clearly in order to determine the objectives of the transaction. Just like the seceding state is obliged to pay its share of the national debt after the secession, it is also entitled to a fair share of the loan given to Cee Company. However the manner in which such transactions are to be handled often depends on the...
5 Pages(1250 words)Essay

...? Section 4 Introduction Legal matters in business situations are very common nowadays. They tend to create a formal and commercial dealings between one another of which law is a major part. No business dealing can be made outside the scope of the law and the terms implied by law. In various business situations, negligence can occur because of which the business can be held vicariously liable. There are some principles of liability that are separately applied for the business situations (Harpwood, 2008, 201). Applying negligence and its defenses in different business situations: The elements of negligence are existence of a duty of care, the breach of that duty and reasonable damage...
15 Pages(3750 words)Essay

...?Essay questions I believe that in this case, the Court should rule in favour of Elin and reject Grapes & Vines Winery’s action. The contract concluded between the parties specified a deadline for performing the contractual obligations. It stated that the wine was to be delivered on or before May 1. Therefore, Grapes & Vines Winery could have delivered the wine anytime before May 1, as the contract did not limit their duty to perform only on May 1. However, they chose to do it in the last possible day – May 1. The fact that the delivery van was involved in an accident does not constitute an objective impediment to performing the contract (destruction of the subject matter of the contract cannot be used as an excuse in this case... questions I ...
1 Pages(250 words)Essay

...., is primarily liable because under the agency law, the principal is liable for all the acts of the agent which are within the authority usually confided to an agent of that character, notwithstanding limitations, as between the principal and the agent, put upon that authority. The driver was acting within the authority confided to him by the principal when the accident happened. 6. Answer: As an independent contractor, the driver of the truck is primarily liable because the employer has no control how the work is done provided the result was delivered to him. 7. Answer. a. the plaintiffs can collect the entire judgment from either defendant 8. Answer: Punitive damages are in order in this case for this is a tort case of...
7 Pages(1750 words)Assignment

...Messrs Soil can prevent the Tom brothers and Salisbury’s from marketing their bags in by using the common law. They have been using the markfor a year and in fact have been successful in marketing the same in their trade. Being the first to manufacture and put into commercial circulation the tompot bag, they a have acquired trademark rights on it. Trademarks and service marks are words, names, symbols, or devices used by manufacturers of goods and providers of services to identify their goods and services, and to distinguish their goods and services from goods manufactured and sold by others (Radcliffe and Brinson, n.d.). Trademarks could be any combination of words, names or symbols that are used in commerce as brand...
7 Pages(1750 words)Essay

...committed in a gravious manner if an individual or group cause severe injury to the others or the individual or group causes severe injury using a fatal weapon or deadly weapon (Chambliss 2011). Throughout, the law treated the threat of physical injury as assault while battery was considered the complete contact to cause harm. This version of the distinction is no longer valid as compared to the physical contact hence null and void. For Hilder to be taken to the hospital after being hit by the husband with a chair leg by the husband Billy is a clear example of Assault or battery to mention. The act is worsened when Billy further exposes their violent acts to the public through putting a slap on the face of the nurse,...
8 Pages(2000 words)Essay

...(a) It was established in Salomon v A Salomon & Co [1897 that 'The company is at law a different person altogether from the subscribers. Nor aresubscribers as members liable, in any shape or form, except to the extent and in the manner provided by the [Companies] Act.'2 It is a general principle of English law that it is not possible in the absence of agency, a trust relationship or wrongful trading to hold one person liable for the debts of another.3 However, like most common law principles and judicial interpretations it is a rebuttable presumption which must give way to a statement to the contrary 'in clear and unequivocal language'4 by Parliament. Under its equitable discretion the...
10 Pages(2500 words)Case Study

...Introduction The interaction between immigration and criminal law is among the most complex and technical fields of law presently. At the middle of criminal law and immigration law, is the immigrant. Whether looking for admission or trying to avoid a deportation, or in relation to any crime, the rights of undocumented immigrants are of considerable importance. Violations of those rights leads to a great concern, when the undocumented immigrants are have committed criminal offence, or where the offense is worsened by the immigration status. Indeed, as noted by Galina (2010) criminal law and immigration law have customarily been viewed...
4 Pages(1000 words)Research Paper

...Scots Law - Commercial Law al Affiliation) Scots Law - Commercial Law: Might the regime governing a buyer’s remedies for defective goods be improved? Scots law is the jurisprudence of the inhabitant of Scotland. Scotland though is part of the United Kingdom; its legal system is autonomous. It has its own laws with courts. The law of Scotland originates from a large number of sources; laws in Scotland are totally different from those of other parts of the United Kingdom. The varied sources from which this law originates include; Legal principles and the Roman law Scots...
5 Pages(1250 words)Essay
sponsored ads
Save Your Time for More Important Things
Let us write or edit the essay on your topic "Busniss law" with a personal 20% discount.
GRAB THE BEST PAPER

Let us find you another Essay on topic Busniss law for FREE!