Comments (0)
Add to wishlistDelete from wishlist
Cite this document
Summary
The purpose of the paper "Analysis Of The Play Streetcar Named Desire" gives the comparative analysis of the two characters of the play by Tennessee Williams written in 1947. A key theme that is dominant in the play is the relationship between sex and death…
Download full paperFile format: .doc, available for editing
HIDE THIS PAPERGRAB THE BEST PAPER93.6% of users find it useful 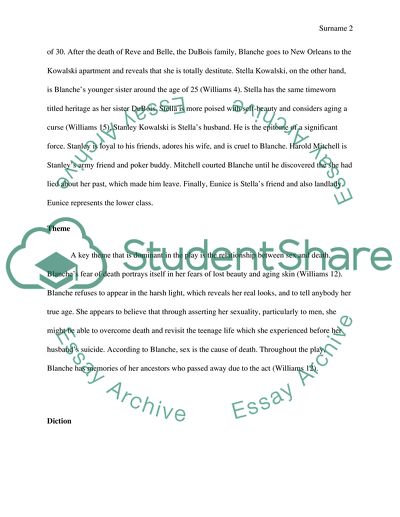 Extract of sample "Analysis Of The Play Streetcar Named Desire"

﻿Analysis Of The Play Streetcar Named Desire
Introduction
A Streetcar Named Desire is a play written by Tennessee Williams, an American playwright, in 1947. The play opened on Broadway on the 3rd of December 1947, and later closed on the 17th of December 1949 (Williams 2). This paper will analyze the play by Tennessee Williams.
Plot
A Streetcar Named Desire represents a cultural collision between Stanley Kowalski and Blanche DuBois. The play represents Blanche as a fading yet attractive Southern beauty; her notions of culture and virtue are in reality nothing but delusions of greatness and alcoholism (Williams 3). In a streetcar named ‘Desire’, she arrives at the flat of Stella Kowalski, her sister, in Faubourg Marigny (Williams 9). The play discusses how Blanche’s life was full of menaces. She had just been sacked from work and realized that her husband was a homosexual. Later on, in the play, Stanley raped Blanche, and this resulted in a nervous breakdown. The character of Blanche is based on Williams’ sister, Rose Williams, who had mental health issues (Williams 9).
Characters
The main characters of the play are Blanche DuBois, Stella Kowalski, Stanley Kowalski, Harold “Mitch” Mitchell, and Eunice. Blanche DuBois is Stella’s older sister (Williams 3). DuBois was a high school English teacher. She is a fragile and loquacious woman around the age of 30. After the death of Reve and Belle, the DuBois family, Blanche goes to New Orleans to the Kowalski apartment and reveals that she is totally destitute. Stella Kowalski, on the other hand, is Blanche’s younger sister around the age of 25 (Williams 4). Stella has the same timeworn titled heritage as her sister DuBois. Stella is more poised with self-beauty and considers aging a curse (Williams 15). Stanley Kowalski is Stella’s husband. He is the epitome of a significant force. Stanley is loyal to his friends, adores his wife, and is cruel to Blanche. Harold Mitchell is Stanley’s army friend and poker buddy. Mitchell courted Blanche until he discovered the she had lied about her past, which made him leave. Finally, Eunice is Stella’s friend and also landlady. Eunice represents the lower class.
Theme
A key theme that is dominant in the play is the relationship between sex and death. Blanche’s fear of death portrays itself in her fears of lost beauty and aging skin (Williams 12). Blanche refuses to appear in the harsh light, which reveals her real looks, and to tell anybody her true age. She appears to believe that through asserting her sexuality, particularly to men, she might be able to overcome death and revisit the teenage life which she experienced before her husband’s suicide. According to Blanche, sex is the cause of death. Throughout the play, Blanche has memories of her ancestors who passed away due to the act (Williams 12).
Diction
Two levels of diction used in A Streetcar Named Desire are spoken words by the characters and texts on the stage directions (Williams 13). Stella’s nuances of speech in the play are set by the characters and their different social statuses and levels of education. Such a case can be noted between Stanley and Blanche, when Stanley portrays a non-grammatical and slangy speech but Blanche portrays fluency in English just to remind us that she was an English teacher. Stella speaks proper English, too. However, at times she depicts unemotional tones apart from the time she speaks of her husband (Williams 16). Finally, Steve and Eunice are fairly a step below Stanley on the language ladder. They use language only to quarrel when they are drunk.
Spectacle
Some of the spectacular moments that the play has include the fact that a film has been based on it in the 50’s, and it has recently been back to Broadway. Irene Mayer Selznick was the producer of the original production. The production used such actors as Marlon Brando, who played Stanley Kowalski. Due to this, the production turned into the most spectacular work ever to be witnessed on Broadway.
Convention
Whereas the play is a comparison between two characters, the underlying factor is the fantasy Blanche wishes to perceive as true and the reality Stanley faces (Williams 2). Blanche wants Stella to move into the castle which she built in the sky. She considers Stella as the person responsible for her family’s social status. This is one of the conventions of the play.

“Analysis Of The Play Streetcar Named Desire Essay”, n.d. https://studentshare.org/miscellaneous/1603499-play-analysis-of-streetcar-named-desire-by-tennesee-williams.
Comments (0)
Click to create a comment or rate a document

CHECK THESE SAMPLES OF Analysis Of The Play Streetcar Named Desire

...the plot effectively and hold the reader’s interest. In Tennessee Williams’s A Streetcar Named Desire and in the screenplay for the same work, conflict is created between characters’ personalities. The main plot of the story revolves around the conflict between Blanche and Stanley, two completely different personality types. Blanche is an aging southern belle with a catch-22 desire for men. Stanley, with his brutish and animalistic qualities, is the antithesis of Blanche’s ideals. He beats his pregnant wife in an alcoholic rage and accuses Blanche of trying to steal his wife’s inheritance, yet despite their apparent differences, Blanche and Stanley’s conflict is what...
2 Pages(500 words)Essay

...? A Streetcar d Desire Introduction: A Streetcar d Desire is a play written by an American playwright known as Tennessee Williams in 1947. Hereceived the special Pulitzer Prize for Drama in 1948 for writing this magnificent piece of literature (Tennessee Williams). The basic plot of the drama revolves around the personality clash between Blanche DuBois and Stanley Kowalski; the two major characters of the play. The play expresses the intense feelings of love and hate, sexuality and devotion, fantasies and hard realities that follow the lives of people with broken and scarred souls. The play secretly...
3 Pages(750 words)Essay

...? A Streetcar d Desire Thesis: Tennessee Williams’ film adapted play, A Streetcar d Desire, is a landmark film in terms of its incredible ensemble performance, Elia Kazan’s brilliant direction, and evocative art direction that pushed censorship lines with its provocative realism of alcoholism, insanity, violence, and rape. Introduction The film Streetcar Named Desire is a complex psychological and social film. The events triggered by the director of the film concern a vivid theme of alcoholism, unstable relations and violence. This film is remarkable for the audience, because there is a real perfect...
4 Pages(1000 words)Essay

...Source of Tension between relationship of Blanche and Stella in A Streetcar d Desire The romantic drama movie A Streetcar Named Desire directed by Elia Kazan was released in 1951. The movie has been adopted from a 1947 play of same name penned by Tennessee Willaims. Blanche and Stella were two major characters of the movie and the story revolves around the tension between the relationships of these two. Since Stanley, Blanche and Stella, who was Stanley’s wife, lived in the same house there were bound to be conflicts as they had different backgrounds. The characteristics of Stanley and Blanche were poles apart. Blanche...
2 Pages(500 words)Essay

...A Streetcar d Desire A Streetcar d Desire What changes were made that were Cinematic in Nature? This play underwent changes that were cinematic in nature throughout the process of making necessary drafts that later became a film product; for instance, the initial draft was an actual play written in 1947 by Tennessee Williams (McCarthy, 2011). One of these cinematic changes was conversion of the play from stage to screen 1951, whereby a film was made and it was directed by Kazan, but starred by Vivien Leigh and Marlon Brando (McCarthy, 2011). This was followed by another cinematic change that entailed a release of unedited...
2 Pages(500 words)Movie Review

...number Stella’s Role in the play a streetcar d Desire In a large part of the play, Stella Kowalski is presented rather as an object or a mere prize to be won than as a person. However, she is actively involved in the play. It is with this that her character I highlighted and her role truly brought out from the play. This is in the sense that her relations with two other characters in the play helps to bring out a major characteristic. As the wife to Stanley Kowalski and the sister to Blanche Dubois she is in a position to bridge two very important functions in the play. She plays an...
2 Pages(500 words)Book Report/Review

...A Streetcar d Desire Themes Play Analysis Task One: Theme Identification-Loneliness A streetcar Named Desire Themes is a play that reflects loneliness and desire for companionship as one of the primary themes that informed the writer of the play. The main character Blanche is dying of loneliness upon the death of her beloved ones, Stella her only sister appears to be the only person she is left with on earth. Her world seems to be growing small as her only sister gets married to Stanley, whom she has no love for him. Loneliness drives her to overprotection as a...
4 Pages(1000 words)Essay

...adjustment in what they represent, the play will have the intriguing effects to its audience because the sharp contrast will help bring out the contrasting effect. Conclusion Loneliness remains a relevant theme to date; William uses desperate characters like Blanche to advance the theme of loneliness and double standard life. In addition, the pursuit for companionship presents as the most dramatic and chilling experience as the character came under the mercies of strangers and foes in equal measure. Irrespective of the experience, loneliness is presented as one of the experience that can plunge one into a series of light and tribulations. Works Cited Hezaveh,...
4 Pages(1000 words)Essay

... therefore becomes her enemy for she knows that it can taint her illusion (Murphy 15). As from the topic analysis illusion and fantasy have been intensively applied in the play through Blanche. Not only does the character use illusion and fantasy as defense mechanism but it also her live in her dream world of “New America.” Illusion and fantasy is thus a theme that provides lesson to the readers on reality of life and what we wish for. It help install consciousness of good decision making with reality of life. Works Cited Murphy, Brenda. A streetcar Named Desire, by Tennessee Williams. Pasadena, Calif.: Salem, 2010. Print.... ﻿The Theme of Illusion and Fantasy in the Play Streetcar Named...
2 Pages(500 words)Essay

...Module Gatsby and A Street Car d Desire INTRODUCTION Although they are written in different contexts, there are more similarities than differences between The Great Gatsby and A Street Car Named Desire’s portrayal of the American Dream. The authors may have different personalities, but in regards to the messages in their works, they have more in common than they could have imagined. The Great Gatsby and A Street Car Named Desire present numerous literary opportunities to examine the their portrayals of the American Dream, shared themes, the reality of the American Dream and the possibility of achieving it. These four aspects will form the crux of this...
4 Pages(1000 words)Essay
sponsored ads
Save Your Time for More Important Things
Let us write or edit the essay on your topic "Analysis Of The Play Streetcar Named Desire" with a personal 20% discount.
GRAB THE BEST PAPER

Let us find you another Essay on topic Analysis Of The Play Streetcar Named Desire for FREE!