Comments (0)
Add to wishlistDelete from wishlist
Cite this document
Summary
This is also known as the frequencies of alleles in a given population. This stability of the alleles is responsible to maintain the equilibrium…
Download full paperFile format: .doc, available for editing
HIDE THIS PAPERGRAB THE BEST PAPER93.1% of users find it useful 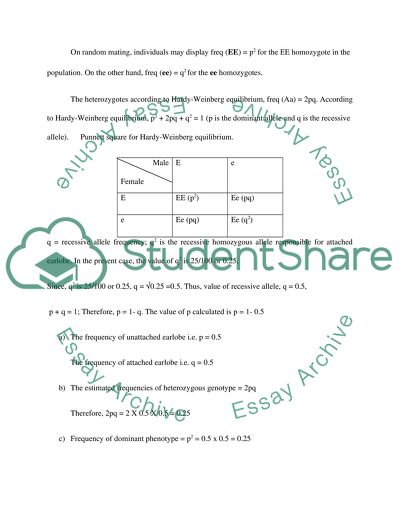 Anthropology" According to Hardy Weinberg equilibrium which is also known as Hardy-Weinberg law, occurrence or presence of alleles remains stable. This is also known as the frequencies of alleles in a given population. This stability of the alleles is responsible to maintain the equilibrium through generations. Alleles are inherited in the similar manner unless their nature is altered by some external forces encompassing environmental factors causing mutation, a genetic drift, meiotic cycle, gene flow or due to non-random mating.
Mutation brings modification in the genes, they are capable of altering the genetic sequence and hence they alter or modify the characteristic of the organism. Some of the mutations are silent and do not bring chances in the exonic sequence of the DNA, hence they remain silent. In certain cases these silent mutations may be expressed in the next generation or are lost with the individual. Thus, mutation or modifications of genomic sequences affects the expression of the genes in a given population. Equilibrium is observed for every inheritable modification and is studied with the help of Hardy-Weinberg equilibrium. H-W equilibrium provides the basis to analyze the alleles of the gene(s).
If no modification occurred, the static allele frequency, crossways generations, remain static. For instance, in the present case, characteristic of the earlobe, either attached or unattached could be studied as the simple case of single locus. The alleles are present on the single locus in two different forms namely; the dominant allele is denoted by E and the recessive by e with frequencies denoted by p and q respectively. Frequency of E freq (E) = p and frequency of e, freq(e)= q. In a given population, under ideal conditions p + q =1
On random mating, individuals may display freq (EE) = p2 for the EE homozygote in the population. On the other hand, freq (ee) = q2 for the ee homozygotes.
The heterozygotes according to Hardy-Weinberg equilibrium, freq (Aa) = 2pq. According to Hardy-Weinberg equilibrium, p2 + 2pq + q2 = 1 (p is the dominant allele and q is the recessive allele). Punnett square for Hardy-Weinberg equilibrium.
Male Female
E
e
E
EE (p2)
Ee (pq)
e
Ee (pq)
Ee (q2)
q = recessive allele frequency; q2 is the recessive homozygous allele responsible for attached earlobe. In the present case, the value of q2 is 25/100 or 0.25,
Since, q2 is 25/100 or 0.25, q = √0.25 =0.5. Thus, value of recessive allele, q = 0.5,
p + q = 1; Therefore, p = 1- q. The value of p calculated is p = 1- 0.5
a) The frequency of unattached earlobe i.e. p = 0.5
The frequency of attached earlobe i.e. q = 0.5
b) The estimated frequencies of heterozygous genotype = 2pq
Therefore, 2pq = 2 X 0.5 X 0.5 = 0.25
c) Frequency of dominant phenotype = p2 = 0.5 x 0.5 = 0.25
Hardy-Weinberg equilibrium explains the genetics of transmission of traits in a population. The equation explains the prevailing frequency of allelic forms of earlobe, attached or unattached and hence the equation is highly significant.
Work Cited
“Hardy-Weinberg Equilibrium Model”. Web. 18 Sept. 2012.
< http://anthro.palomar.edu/synthetic/synth_2.htm >. Read More
Share:
Tags
Cite this document
(“Anthropology Essay Example | Topics and Well Written Essays - 500 words - 7”, n.d.)
Anthropology Essay Example | Topics and Well Written Essays - 500 words - 7. Retrieved from https://studentshare.org/miscellaneous/1603400-anthropology

CHECK THESE SAMPLES OF Anthropology

...?ANTHROPOLOGY ESSAY QUESTION Renowned anthropologist theorist and researcher Sherry B. Ortner (1974) has made a critical and in-depth analysis of women within biological and cultural perspective, on the foundation of which she has endorsed the relationship between woman and man on the one hand, and between woman and nature on the other. Ortner declares inferiority of women at social scale as the outcome of her biological and physical composition, which not only deprives her of respect equivalent to men, but also are assigned quite different duties, obligations and responsibilities in the light of their innate physical qualities. Hence, it is nature to assign divergent responsibilities to both the genders on the basis of...
2 Pages(500 words)Essay

...Anthropology The relationship between phenotype, genotype, and natural selection is essential to the knowledge of heredity and development organism. Phenotype refers to the traits that an individual has, and is determined by the genotype and the environment. Natural selection comprises of the process which results from differences in reproductive successes among unique individual phenotypes living at a given generation and eventually resulting in a biased representation of genes at the next generation.Natural selection acts on phenotypes because differential reproduction and survivorship depend on phenotype. If the phenotype affecting reproduction or survivorship is genetically based, then selection can remove genotypes...
3 Pages(750 words)Essay

...COMPARE AND CONTRAST ANTHROPOLOGY TO OTHER SOCIAL SCIENCE DISCIPLINES Anthropology is the study of human diversity or in general humanity around the world and has its origins in the natural sciences, the humanities, and the social sciences (Eric 227; Herbert 716-731). People who specialize in this subject are called anthropologists. Anthropologists in general look at cross-cultural differences in social institutions, cultural beliefs, and communication styles. In fact in recent years with the growing globalization, this subject has gained much more importance. Knowledge about human diversity is helpful especially in the case of global organizations. Anthropology is made up of four...
3 Pages(750 words)Essay

...SAMOAN HISTORY AND CULTURE INTRODUCTION Etymology of the word SAMOA signifies sacred center where sa means "sacred" and moa means "center Centrality which is a very observable feature of Samoan culture is a very important aspect of Samoan Identity. Mageo stated that even the Prehistoric Samoan petroglyphs feature a centrality motif - a perfect ring of indents around an open space (Kikuchi 1964). This centrality motif is also revealed in the political domains of Samoans. The topography of their villages shows an ellipsis with the titular head in the center or the malae. In terms of geography Samoa or the Samoan islands is an archipelago in the Central South Pacific forming part of Polynesia and the wider region of Oceania... HISTORY AND...
6 Pages(1500 words)Essay

...Sur 25 July, Anthropology Introduction: Considering the world records, it has been obtained that there are around 370 million indigenous people spread across 70 countries. Their history reflects on them been evicted of their lands and having no access to the needful resources depending on the places they live in. They suffer the greatest disadvantages in the world. These are the people who originally lived in some region before the times of colonization or a nation’s transformation, and possess different culture, tradition and language. Several studies have been and are still being conducted on these people to determine their sufferings as well as their struggle with the nature on which they are highly dependent (Shah)....
4 Pages(1000 words)Essay

...Task: Anthropology The legacy of a prophet is a life related story as well as documentary on the Muslim religion with peculiar emphasis given to Muhammad. The political life as well as cultural characteristics takes a centre stage with milieu and ulema leaders. This is due to diverting interpretation of the Muslim law that prevails. The religious leaders of the Muslim community require respect and patience for others. This is evident among the Dalits, which blame the political Ulema for various conditions present at the moment (Shadid 87). For instance, the Ulema led to the development of diverse classes that make living conditions better for some people while others extremely difficult. This is together with the upper...
1 Pages(250 words)Assignment

...Anthropology In Shadids book (legacy of the prophet) describes new Muslim leaders not rooted in the Ulema, or in the milieu of the Ulema, or in theirforms of social reproduction (families, Madrassa). What are some of the main common and differentiating features of these new leaders and their messages? Ulama is a term used to describe the class of educated Muslim legal scholars, who have completed studies in various Islamic fields such Faqih, Mufti, or Muhadith. In the book “the legacy of the prophet,” Shadid describes how Muslim leaders continue to drift from Ulema. The new class of leaders can easily be recognized by their message and actions. The book illustrates how Muslim leaders have continued to dissociate...
2 Pages(500 words)Assignment

... Human’s Place in Nature A. Natural selection This s the process by which organisms is able to survive the torrents of nature through demonstration of traits that favor their survival. Charles Darwin developed the concept of natural selection. The traits allow the organisms to be able to live and reproduce. For example, the skin color of the people in the tropics is darker compared to those in cold areas due to an adaptation to the strong sun in these regions, the amount of melanin in the skin is too high. This has resulted to the darkening of the skin in order to offer protection from the sun’s radiation. B. Darwinian theory of evolution establishes that the poor mother of seven children is more fit for survival because... Human’s Place in...
8 Pages(2000 words)Essay

... Lingua Globa: How English Became Globish Summary of the article The article expounds on how a mongrel tongue became English, a dominant language today. According to the article, the interaction between people through inversions such as Anglo-Saxons invading England and French Normans interacting with English people provided the building block for English. In relation to the origin of English, the article asserts that traces of English language can be found in surprising places but not as violent as that of other languages such as French, German and Russian. The democratization of English was, however, the main reason for its global domination. In relation to globalization, the article claims that English is every person’s second... Lingua...
5 Pages(1250 words)Essay
sponsored ads
Save Your Time for More Important Things
Let us write or edit the essay on your topic "Anthropology" with a personal 20% discount.
GRAB THE BEST PAPER

Let us find you another Essay on topic Anthropology for FREE!