Comments (0)
Add to wishlist Delete from wishlist
Cite this document
Summary
On the other hand, monopoly is the complete control of trade operations such as provision of particular commodities or services. (Sangla 2009, p.190). Apparently, cartels…
Download full paper File format: .doc, available for editing
HIDE THIS PAPERGRAB THE BEST PAPER94.9% of users find it useful 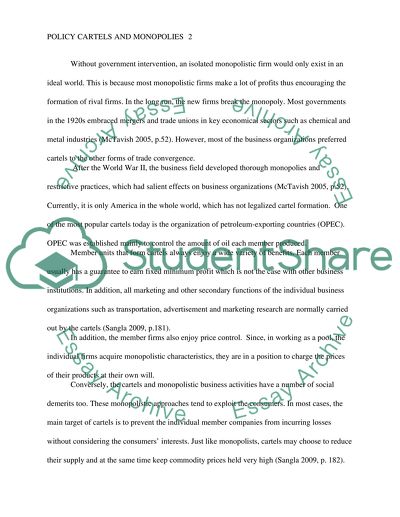 Extract of sample "Business organisation and policy cartels and monopolies"

Policy Cartels and Monopolies Instructions: Task: Policy Cartels and Monopolies A policy cartel is a group of companies that come together with the aim of achieving particular trade goals. On the other hand, monopoly is the complete control of trade operations such as provision of particular commodities or services. (Sangla 2009, p.190). Apparently, cartels and monopolistic enterprises are in complete hold of the contemporary business realm.
Policy cartels are classified according to the purposes for which they are formed. They are mostly classified as price determining, terms fixing, buying and output determining policy cartels. The price determining cartels aim at controlling market prices while the terms fixing cartels dictate the terms and conditions of sale. On the other hand, buying cartels aim at purchasing raw materials for its members while the output determining cartels determine the quantity of output for each member unit as the name suggests (Sangla 2009, p.181).
Without government intervention, an isolated monopolistic firm would only exist in an ideal world. This is because most monopolistic firms make a lot of profits thus encouraging the formation of rival firms. In the long run, the new firms break the monopoly. Most governments in the 1920s embraced mergers and trade unions in key economical sectors such as chemical and metal industries (McTavish 2005, p.52). However, most of the business organizations preferred cartels to the other forms of trade convergence.
After the World War II, the business field developed thorough monopolies and restrictive practices, which had salient effects on business organizations (McTavish 2005, p.52). Currently, it is only America in the whole world, which has not legalized cartel formation. One of the most popular cartels today is the organization of petroleum-exporting countries (OPEC). OPEC was established mainly to control the amount of oil each member produced.
Member units that form cartels always enjoy a wide variety of benefits. Each member usually has a guarantee to earn fixed minimum profit which is not the case with other business institutions. In addition, all marketing and other secondary functions of the individual business organizations such as transportation, advertisement and marketing research are normally carried out by the cartels (Sangla 2009, p.181).
In addition, the member firms also enjoy price control. Since, in working as a pool, the individual firms acquire monopolistic characteristics, they are in a position to charge the prices of their products at their own will.
Conversely, the cartels and monopolistic business activities have a number of social demerits too. These monopolistic approaches tend to exploit the consumers. In most cases, the main target of cartels is to prevent the individual member companies from incurring losses without considering the consumers’ interests. Just like monopolists, cartels may choose to reduce their supply and at the same time keep commodity prices held very high (Sangla 2009, p. 182).
Moreover, the cartels are difficult to maintain. Some firms are always tempted to produce more commodities than agreed upon by the cartel in order to realize exorbitant profits. This act of unfaithfulness may lead to failure of the syndicate as it may prove difficult to achieve its preset objectives.
Cartel and monopolistic practices, therefore, play a very essential role in the business field. They have both positive and negative effects and, therefore, one should not prematurely dispute the idea of encouraging the practice. Price dictation, for instance, can only be harmful to the consumers, if the commodity in question is extremely rare, a situation which is almost impossible in real life situation (McTavish 2005, p.68).
Bibliography
McTavish, D, 2005, Business and Public Management in the UK, Ashgate Publishing, Farnham.
Sangla, R, 2009, Business Organization, FK Publications, Delhi. Read More
Share:
Tags
Cite this document
(“Business organisation and policy cartels and monopolies Essay”, n.d.)
Business organisation and policy cartels and monopolies Essay. Retrieved from https://studentshare.org/miscellaneous/1602990-business-organisation-and-policy-cartels-and-monopolies

CHECK THESE SAMPLES OF Business organisation and policy cartels and monopolies

...773601 - MONOPOLIES AND CARTELS Total Price: $10 Messages: 3 new 8 total Macro & Micro economics, Research Paper Topic: MONOPOLIES AND CARTELS Instructions: Please read and answer questions There has hardly been a time in the last hundred years in which some company was not under attack for monopolistic practices. First, it was Standard Oil and the railroads. Later, it was AT&T and Microsoft. It’s an ever changing list. Questions: 1. Please do a research on the changes that have occurred in the airline industry since the deregulation of the industry. Clearly, the deregulation of the airline business has led to such a time when there has been more openness in the penetration of the market by smaller companies that otherwise would...
2 Pages (500 words) Research Paper

A Bureaucratic Organisation and a Local Team

Here, we examine the consequences of MCS in the formulation, implementation, and monitoring of various strategic decisions. This study not only confirms the original theory by establishing a relationship between strategy and different variables of MCS but also improves upon it by considering how this relationship influences the performance of the organization. Hence any information which will assist the managers to manage the organization in a more profitable manner and achieve the desired goals of the organization can be clubbed as MCS. Hence MCS is very important for the managers to be able to attain the organizational objectives and aims.
When we consider any bureaucracy the predominant impression is that of a slow mo...
9 Pages (2250 words) Assignment

Issues of intellectual property protection, Issues of plundering knowledge, Issues of losing brain cheaply, Issues of a new colony, etc are some of the major issues to be considered when we consider China as a knowledge economy. These issues are really complicated and have more depth than we anticipate. Common wellbeing is the major aim of the economic reforms in China today. In fact, all the countries have the same motto; living and working together for the common good, enabling cooperation and mutual prosperity to coexist with healthy and fair competition. Since China is a heavily populated country, balancing the interests of a huge population is a difficult task; but it is necessary to avoid any social, economical, political or...
6 Pages (1500 words) Assignment

9 Pages (2250 words) Case Study
sponsored ads
Save Your Time for More Important Things
Let us write or edit the essay on your topic "Business organisation and policy cartels and monopolies" with a personal 20% discount.
GRAB THE BEST PAPER

Let us find you another Essay on topic Business organisation and policy cartels and monopolies for FREE!