Comments (0)
Add to wishlistDelete from wishlist
Cite this document
Summary
An appeal is the process that allows the losing party in a court trial to have the case re tried; typically, the defendant will allege and try to prove to the appellate court that their case was tried unfairly with one or more errors that rendered it fundamentally…
Download full paperFile format: .doc, available for editing
HIDE THIS PAPERGRAB THE BEST PAPER94.1% of users find it useful 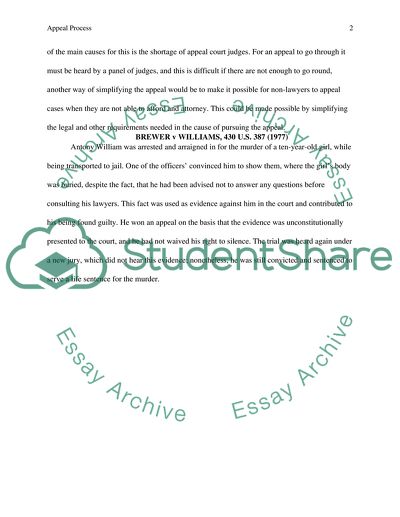 What is an appeal? An appeal is the process that allows the losing party in a court trial to have the case re tried; typically, the defendant will allege and try to prove to the appellate court that their case was tried unfairly with one or more errors that rendered it fundamentally unconstitutional. In the federal courts, some decisions are subject to appeals with both parties at liberty to appeal in civil cases; however, the government is not allowed to appeal on a not-guilty verdict. Nonetheless, a guilty one may be contested by either party. Appeal is viable in a number of cases although some may require to be heard by separate appellate committees such as the appellate committee of bankrupt judges (Lawfirms.com, n.d.).
How do appeals factor into the overall criminal procedures and processes
A litigant wishing to appeal does it only on paper, and at the appeal, level there is no actual trial. The litigant will have to write down a brief explaining how the court erred in his sentencing, or how their constitutional rights may have been violated in the trail. The federal or state cause trying this case will review the brief and determine based on the submitted evidence if it is a legitimate cause for a retrial. In some cases, the appeal courts will require having an oral argument by the lawyers; this does not involve submission of any new evidence (Lawfirms.com, n.d.). While the appellate court has the legal mandate to review any facts pertaining to the trial, the review process is based on what was on record on the court. It can review the facts of the case, but cannot overturn decisions on factual grounds without categorical evidence of erroneous decisions.
How can we improve the appeals process?
Court decisions are not infallible since they are made by humans who are fallible and as such, it is crucial that people are given as the benefit of doubt for as long as possible and all loose ends tied up, this can only be achieved by an improved appeal process. Appeals are often long and tiresome processes, which have an incredible toll on the plaintiff and their families; one of the main causes for this is the shortage of appeal court judges. For an appeal to go through it must be heard by a panel of judges, and this is difficult if there are not enough to go round, another way of simplifying the appeal would be to make it possible for non-lawyers to appeal cases when they are not able to afford and attorney. This could be made possible by simplifying the legal and other requirements needed in the cause of pursuing the appeal.
BREWER v WILLIAMS, 430 U.S. 387 (1977)
Antony William was arrested and arraigned in for the murder of a ten-year-old girl, while being transported to jail. One of the officers’ convinced him to show them, where the girl’s body was buried, despite the fact, that he had been advised not to answer any questions before consulting his lawyers. This fact was used as evidence against him in the court and contributed to his being found guilty. He won an appeal on the basis that the evidence was unconstitutionally presented to the court, and he had not waived his right to silence. The trial was heard again under a new jury, which did not hear this evidence; nonetheless, he was still convicted and sentenced to serve a life sentence for the murder.
References
Legal information Institute. (1977). Brewer v. Williams Certiorari To The United States Court Of Appeals For The Eighth Circuit 430 U.S. 387. Retrieved from http://www.law.cornell.edu/supct/html/historics/USSC_CR_0430_0387_ZS.html
LawFirms.com. (n.d.) How Appeals Work. Retrieved from
http://www.lawfirms.com/resources/lawsuits-and-disputes/appeals/how-appeals-work.htm Read More
Share:
Tags
Cite this document
(“Appeal Process Essay Example | Topics and Well Written Essays - 500 words”, n.d.)
Appeal Process Essay Example | Topics and Well Written Essays - 500 words. Retrieved from https://studentshare.org/miscellaneous/1602303-appeal-process

CHECK THESE SAMPLES OF Appeal Process

...HERE HERE YOUR HERE HERE Women’s Sex Appeal vs. Men’s Sex Appeal INTRODUCTION When ifying sex appeal, men and women have radically different views on what constitutes sexiness. There are also cultural factors that must be taken into consideration when determining sex appeal that differ depending on the values and beliefs of men and women in foreign countries. For example, Western society is inundated with sexually-explicit materials in many advertising formats as a means of gaining male or female devotion to a particular product or service. Depending on the imagery and the market, whether male or female, it can often create a stimulus response that ultimately leads to...
6 Pages(1500 words)Research Paper

...Since I moved to Oxford (September 2006) I suffered recurrent bouts of chronic infections owing to lowered immunity. As the attached certificates show I had severe recurrence of pharyngitis and laryngitis, and was diagnosed with chronic pharyngotonsillitis due to a medical condition of very low immunity to antiviral and antibacterial infections. Many times within the span of these three years I had to go through medical examinations usually owing to intense discomforts triggered by pharyngeal swabs (2007, 2008 and 2009), antifungal and antibacterial treatments (December 2007, October 2008) iontotherapy 2008) inhalations (2008) antibiotic treatments ( November 2006, April 2007, October 2007, December 2007, February 2008, October... I moved to...
4 Pages(1000 words)Essay

...is considered to be a final decision unless the appeals court sends the case back to trial court for additional proceedings. The litigant also has the option to file a request petition to the Supreme Court for reviewing the case. The Supreme Court may or may not grant review to all the cases. The review is only granted in cases which involve an important law which has been interpreted differently by two or more courts. The appeal process is very necessary for a fair trial as it gives enough chances to the litigant to prove their innocence before the court gives the final verdict. Although the government has tried their best to make the trial systems fair and just, yet a lot should be...
4 Pages(1000 words)Research Paper

...MDC North Campus  11380 NW 27 AV  Miami, FL 33167-3418  April 30, 2004   Dear Dr. Matilde Roig-Watnik,  I’m writing this letter to enquire about the status of my academic probation. At the beginning of this school year, the administration placed me on probation due to my poor academic performance. However, I’ve passed all of my classes for the spring term. Therefore, I’m asking that you would kindly remove my academic probation so that I can complete my degree. This probation hinders me from finishing my degree and then hopefully finding a decent job. The situation is so dire that I can’t even register for any classes. I hope to complete my B.A. in public administration at FIU. Without an associate degree, it will be impossible... North...
1 Pages(250 words)Essay

...To, The Registrar, (write here) Application requesting to grant 2 grace marks Sir, This is to that I ……………….(please writeyour name) , student of ………….(write name of course you failed ) , admitted in………..(write the name of your institution) would like to request you that I failed my final exam by 2 marks and achieved ‘F’ grade in 3850 course , despite of the hard work and strenuous efforts I was not able to attain good grade. The pattern of the exam was really tough but I tried my level best to perform well but, surprisingly I scored less than 30% marks. Therefore, I would like to request you to please grant me 2 grace marks so that I can clear my exam. Since, I am an international student and I need to finish all credits by given...
1 Pages(250 words)Essay

...Appeal Process Anybody declared guilty a crime has the right to advance that conviction in the event that they accept a legitimate slip has happened. On possibility that you have been affirmed guilty a wrongdoing and plan to request, you are no more known as the litigant, you are currently the appealing party in the case. In criminal cases, an advance asks a higher court to take a gander at the record of the trial transactions to figure out whether a legitimate lapse happened that may have influenced the conclusion of the trial or the sentence forced by the judge. An advance infrequently challenges the choice of the jury, yet rather challenges any legitimate blunders that the judge or...
1 Pages(250 words)Article

...To Whom It May Concern: I am writing to appeal my Academic Probation from pace I was not surprised, but very upset and heartbroken to receive a letter earlier this week informing me of my probation. Therefore, I request you to reinstate me for next semester after considering my appeal. I have recently suffered from a tragic family incident, which has left me and my family in a grief stricken and depressive state. My step mother passed away in a car accident in October and since then I have been struggling to keep my family and academic life intact. I have been attached to her (like a blood relation). Therefore, I and my younger sister have suffered severe anxiety and melancholy afterward. My younger...
1 Pages(250 words)Essay

...To Whom It May Concern, I am hereby appealing my rejection from the of Southern California for the Fall admission. After reading the letter, I was upset and afraid the whole night. Being rejected demoralized me, and I was afraid to break the bad news to my parents. In order to cheer myself up, I kept on reassuring myself that everything was going to be okay and that God had better plans for me at Loyola Marymount University and not at USC. I was not planning to appeal this decision for fear of being rejected again. However, the events of yesterday made me realize how I have been fooling around all this time. I have been pretending to be okay and fine which is not the case. During school holidays, I...
1 Pages(250 words)Admission/Application Essay

...days. After the conclusions have been presented, the court then gives a final resolution to the disputing parties. This happens in a period of approximately fifteen days. The judge then goes ahead to give a judgment after examining the available evidence (Timothy, 2013). The disputing parties can now go ahead and file an appeal or a complaint in case they are not contented with the judgment. In case of an appeal, a state supreme tribunal is appointed to handle the appealed case. Since the appeal process contains of correcting errors i.e. typographical errors, a judge has the mandate to review the complaint or the appeal presented before...
2 Pages(500 words)Research Paper
sponsored ads
Save Your Time for More Important Things
Let us write or edit the essay on your topic "Appeal Process" with a personal 20% discount.
GRAB THE BEST PAPER

Let us find you another Essay on topic Appeal Process for FREE!