Comments (0)
Add to wishlistDelete from wishlist
Cite this document
Summary
Employment law in the U. K. has grown more stringent over the past 20 years, in part as a response to the 1984 PACE Act, and to changes in practices related to conformance to E. U. standards. In particular, it is important to consider whether an employee review process will result in a criminal proceeding, or a disciplinary hearing.
…
Download full paperFile format: .doc, available for editing
HIDE THIS PAPERGRAB THE BEST PAPER97.5% of users find it useful 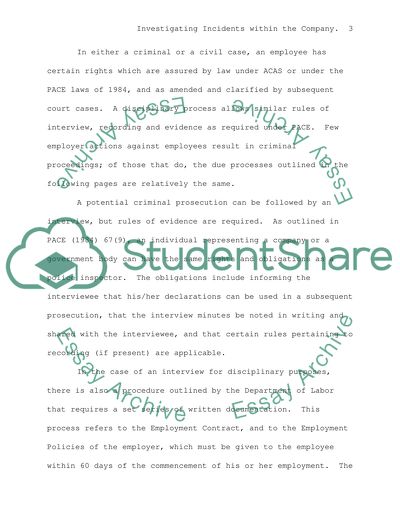 Download file to see previous pages While the employers' range of freedom has been curtailed to some degree, they can benefit from proper documentation, following procedures which have now become quite strictly defined, and ensuring that they enforce the terms of the Employment Contracts in an evenhanded way.
In either a criminal or a civil case, an employee has certain rights which are assured by law under ACAS or under the PACE laws of 1984, and as amended and clarified by subsequent court cases. A disciplinary process allows similar rules of interview, recording and evidence as required under PACE. Few employer actions against employees result in criminal proceedings; of those that do, the due processes outlined in the following pages are relatively the same.
A potential criminal prosecution can be followed by an interview, but rules of evidence are required. As outlined in PACE (1984) 67(9), an individual representing a company or a government body can have the same rights and obligations as a police inspector. The obligations include informing the interviewee that his/her declarations can be used in a subsequent prosecution, that the interview minutes be noted in writing and shared with the interviewee, and that certain rules pertaining to recording (if present) are applicable.
In the case of an interview for disciplinary purposes, there is also a procedure outlined by the Department of Labor that requires a set series of written documentation. This process refers to the Employment Contract, and to the Employment Policies of the employer, which must be given to the employee within 60 days of the commencement of his or her employment. The elements that must be put in the Employment Contract have grown over the past twenty years, as has the unenforceability of some of the clauses which had existed in Employment Contracts written at an earlier period. Employers should be particularly chary about imposing changes (real or implied) in the work contract without the explicit, and usually written, consent of those employed. Failure to garner the employees' agreement can result in a rupture of contract and a cause for action against the employer in the future.
This paper will outline the procedures in both cases, and the differences. It will also present a way to decide which process should be pursued, i.e. whether an employee should be treated as a potential defendant in a criminal case, or whether the employer intends to keep the person in his/her employ, but would like to address certain deficiencies through a disciplinary process.
The Disciplinary Process
Employees who are not meeting the terms of their Employment Contract can be subject to disciplinary hearings. It should be noted that, by the time the formal procedure is followed, there may have been some previous conversations between the employee and his/her supervisor. The substance of these conversations should be noted by the supervisor, as these notes may become part of a subsequent disciplinary process. Although a conversation between the employ ...Download file to see next pagesRead More
Share:
Tags
Cite this document
(“Law & Criminology Case Study Example | Topics and Well Written Essays - 4500 words”, n.d.)
Law & Criminology Case Study Example | Topics and Well Written Essays - 4500 words. Retrieved from https://studentshare.org/miscellaneous/1504995-law-criminology

CHECK THESE SAMPLES OF Law & Criminology

As may be inferred from the above stated, the subjectivism/objectivism debate effectively mirrors the existent tension between the principles of deed and equal culpability. The objectivist camp believes that criminal liability should be limited to what the person actually did, while the subjectivist camp upholds the expansion of criminal liability towards the embrace of the person's state of mind. Accordingly, the objectivist camp upholds the principle of deeds and the subjectivist camp that of equal culpability.3 The complex nature of prevailing criminal law lies it that it is neither one nor the other but seeks the embrace of both positions. This lends to several questions, all of which combine to underscore the controver...
4 Pages(1000 words)Essay

Thus, the advertisement placed by Adams in the local newspaper is an invitation to treat and not an offer, as per the case law discussed above. It is to be determined, whether Adam had formed legally binding contracts...
6 Pages(1500 words)Case Study
sponsored ads
Save Your Time for More Important Things
Let us write or edit the case study on your topic "Law & Criminology" with a personal 20% discount.
GRAB THE BEST PAPER

Let us find you another Case Study on topic Law & Criminology for FREE!