What is the current macroeconomic situation in the U.S. (e.g. is the U.S. economy currently concerned about unemployment, inflation, recession, etc.) What fiscal policies and monetary policies would be appropriate at this time - Essay Example

Comments (0)
Add to wishlistDelete from wishlist
Cite this document
Summary
Gross domestic product is the total monetary value of services and goods produced within the country’s borders, within a specified time usually one year. Economic growth is the annual rate of change of the gross domestic product (Boyes & Melvin, 2012). Since 2009, the U.S…
Download full paperFile format: .doc, available for editing
HIDE THIS PAPERGRAB THE BEST PAPER95.1% of users find it useful 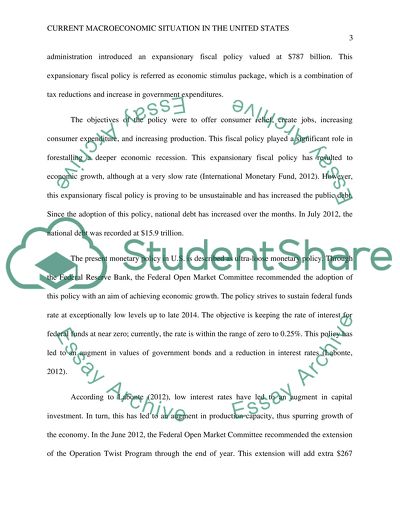 Extract of sample "What is the current macroeconomic situation in the U.S. (e.g. is the U.S. economy currently concerned about unemployment, inflation, recession, etc.) What fiscal policies and monetary policies would be appropriate at this time"

Current Macroeconomic Situation in the United s Current Macroeconomic Situation in the United s Gross domestic productis the total monetary value of services and goods produced within the country’s borders, within a specified time usually one year. Economic growth is the annual rate of change of the gross domestic product (Boyes & Melvin, 2012). Since 2009, the U.S. economy has been experiencing positive growth, although the rate of economic growth is too slow. The GDP growth, consumption and income, are all positive, despite that they are growing at below trend rates. The housing market shows no sign of recovery. The real GDP augmented at a yearly rate of 1.5% in the second quarter of 2012. This was a decline from 2% growth rate recorded in the first quarter (Censky, 2012).
Unemployment rate is the ratio of jobless individuals to the labor force. The economy has been experiencing employment growth over the past twenty two months. In July 2012, the employment increased by 163, 000 jobs. The rate of unemployment remained basically unchanged at 8.3% as compared to previous months. Since the commencement of 2012, employment expansion has averaged 151, 000 jobs per month. Inflation rate is the general increase in price levels of services and goods. In June 2012, the rate of inflation in the U.S. was recorded at 1.7%. In June 2012, the Consumer Price Index for all metropolitan consumers was unaffected on a seasonally regulated basis. Over the last one year, all commodities index augmented 1.7% before seasonal alteration (Censky, 2012).
Expansionary fiscal policy is described as an augment in government spending and/or a cut in taxes, which causes the budget surplus to reduce or budget shortfall to increase (Boyes & Melvin, 2012). According to International Monetary Fund (2012), in 2009, the United States administration introduced an expansionary fiscal policy valued at $787 billion. This expansionary fiscal policy is referred as economic stimulus package, which is a combination of tax reductions and increase in government expenditures.
The objectives of the policy were to offer consumer relief, create jobs, increasing consumer expenditure, and increasing production. This fiscal policy played a significant role in forestalling a deeper economic recession. This expansionary fiscal policy has resulted to economic growth, although at a very slow rate (International Monetary Fund, 2012). However, this expansionary fiscal policy is proving to be unsustainable and has increased the public debt. Since the adoption of this policy, national debt has increased over the months. In July 2012, the national debt was recorded at $15.9 trillion.
The present monetary policy in U.S. is described as ultra-loose monetary policy. Through the Federal Reserve Bank, the Federal Open Market Committee recommended the adoption of this policy with an aim of achieving economic growth. The policy strives to sustain federal funds rate at exceptionally low levels up to late 2014. The objective is keeping the rate of interest for federal funds at near zero; currently, the rate is within the range of zero to 0.25%. This policy has led to an augment in values of government bonds and a reduction in interest rates (Labonte, 2012).
According to Labonte (2012), low interest rates have led to an augment in capital investment. In turn, this has led to an augment in production capacity, thus spurring growth of the economy. In the June 2012, the Federal Open Market Committee recommended the extension of the Operation Twist Program through the end of year. This extension will add extra $267 billion to the program through which the Federal Reserve Bank sells some of its intermediate-term bonds with an aim of purchasing long-term bonds. Theoretically, this action is expected to reduce the rate of interest for long-term loans. The U.S. economy should continue using expansionary monetary and fiscal policies with appropriate adjustments.
References
Censky, A. (2012). GDP Report: U.S. Economy Slowed in Second Quarter. Atlanta: CNNMoney. Retrieved from: http://money.cnn.com/2012/07/27/news/economy/us-gdp/index.htm
Boyes, W. & Melvin, M. (2012). Macroeconomics. New York: Cengage Learning.
International Monetary Fund. (2012). World Economic Outlook, April 2012: Growth Resuming, Dangers Remain. Washington: International Monetary Fund.
Labonte, M. (2012). Monetary Policy and the Federal Reserve: Current Policy and Conditions. Washington: Congressional Research Service. Read More
Share:
Tags
Cite this document
(“What is the current macroeconomic situation in the U.S. (e.g. is the Essay - 1”, n.d.)
What is the current macroeconomic situation in the U.S. (e.g. is the Essay - 1. Retrieved from https://studentshare.org/miscellaneous/1601610-what-is-the-current-macroeconomic-situation-in-the-us-eg-is-the-us-economy-currently-concerned-about-unemployment-inflation-recession-etc-what-fiscal-policies-and-monetary-policies-would-be-appropriate-at-this-time

“What Is the Current Macroeconomic Situation in the U.S. (e.g. Is the Essay - 1”, n.d. https://studentshare.org/miscellaneous/1601610-what-is-the-current-macroeconomic-situation-in-the-us-eg-is-the-us-economy-currently-concerned-about-unemployment-inflation-recession-etc-what-fiscal-policies-and-monetary-policies-would-be-appropriate-at-this-time.
Comments (0)
Click to create a comment or rate a document

CHECK THESE SAMPLES OF What is the current macroeconomic situation in the U.S. (e.g. is the U.S. economy currently concerned about unemployment, inflation, recession, etc.) What fiscal policies and monetary policies would be appropriate at this time

...? Canadian Monetary and Fiscal Policies The present economic of Canada is indeed a confirmation of the very fact that the government has been trying to launch the country into high economic realms and catapult the process of economic development. Indeed, much success has always been realized in the context of Canadian economic development to the extent that one is left to wonder about the policies in place and the various measures the government has put into place to ensure the country sails through these turbulent economic times. Despite the challenges that have characterized the West in the recent past, the last two years have not...
7 Pages(1750 words)Essay

Current Macroeconomic Situation in the USA

...the economy slipped. Job creation has been remarkably low in the United States creating a large population of individuals without jobs. Apart from concern over unemployment, the US economy is equally apprehensive about recession and inflation which as well have exerted a lot of pressure on the economy of the country. What fiscal policies and monetary policies would be appropriate at this time in the US? The economic revival that started in the center of 2009 emerges to have reinforced in...
4 Pages(1000 words)Essay

...of the same opinion concerning the regulation of nuclear weapons and maintaining balance of power. The words of former president, George W. Bush (2001) unveil America’s policy with regard to balance of power when he says, “American remains engaged in the world by history and by choice, shaping a balance of power that favours freedom.” The words of the presidents are indicative of the increasing threat of arm race which shadows the concept of balance of power, especially after the two world wars and Vietnam War. Deterrence Deterrence is “the act or process of discouraging actions or preventing occurrences by instilling fear or doubt or anxiety” (WordReference.com English Dictionary, 2010). While...
2 Pages(500 words)Essay

... and policies based on the interests of the people. At the same time, state laws may create problems also. For example, underage drinking is prohibited in some American states whereas it is allowed in other states. In Alaska, minimum licensing age for driving is 14 whereas in Kentucky, it is 16. In other words, a teenager who is able to drive in Alaska cannot drive his car in Kentucky. In short, dual systems have its merits and demerits. References Tenth Amendment. (2012). The Free Dictionary. Retrieved from http://legal-dictionary.thefreedictionary.com/Tenth+Amendment+to+the+United+States+Constitution... US Constitution s right in American political system refers to the political rights reserved for the governments. Even...
1 Pages(250 words)Essay

...Macroeconomic Situation in the U.S. Task: Macroeconomic Situation in the U.S. The U.S. economy is the world’s largest national economy, and has been on a constant rise since the global recession that hit the world economies between 2008 and 2009. The economy’s growth is aided by a variety of factors, both on the micro and macroeconomic fronts. However, considering the overall sources of economic growth, the macroeconomic aspects of any economy are the main drivers of the economy. This is because such aspects as...
2 Pages(500 words)Essay

Monetary and Fiscal Policies on Recession

...system measures. This ensured that there was enough money in circulation in the economy in order to restore the previous economic situation. However, the rate of recovery has been very slow as most of the economic sectors have not been able to achieve financial rationality. The restoration of money supply has been able to reduce significantly the rate of unemployment due to recovery of many businesses and lowering rate s of inflation (Navarro, 2009). Bibliography Borio, C. & Disyatat, P. (2010). Unconventional Monetary Policies: An Appraisal. The Manchester School 78, no. s1 (September): 53-89. Navarro, P....
2 Pages(500 words)Research Paper

..."Crisis of Confidence" in the United s The United s was a dominant world power in the 1970’s even though the countries self-perception was mired in doubt and malaise. The stagflation of the country’s economy, the experience and results of the Vietnam war, the lack of confidence of the government by the people as it was no longer perceived as a champion of freedom, the Watergate imbroglio all contributed to the “crises of confidence” in the country. The debt on the dependency of US citizens and the government increased resulting to difficult times. Jimmy Carter came into power at the time after the country’s failure in the Vietnam and...
2 Pages(500 words)Admission/Application Essay
sponsored ads
Save Your Time for More Important Things
Let us write or edit the essay on your topic "What is the current macroeconomic situation in the U.S. (e.g. is the U.S. economy currently concerned about unemployment, inflation, recession, etc.) What fiscal policies and monetary policies would be appropriate at this time" with a personal 20% discount.
GRAB THE BEST PAPER

Let us find you another Essay on topic What is the current macroeconomic situation in the U.S. (e.g. is the U.S. economy currently concerned about unemployment, inflation, recession, etc.) What fiscal policies and monetary policies would be appropriate at this time for FREE!