Comments (0)
Add to wishlistDelete from wishlist
Cite this document
Summary
The country has multiple ethnic groups, including the Indians, Africans, Europeans, Chinese as well as other mixed ethnicities. Ethnicity is widely identified in the country as demonstrated by…
Download full paperFile format: .doc, available for editing
HIDE THIS PAPERGRAB THE BEST PAPER95.3% of users find it useful 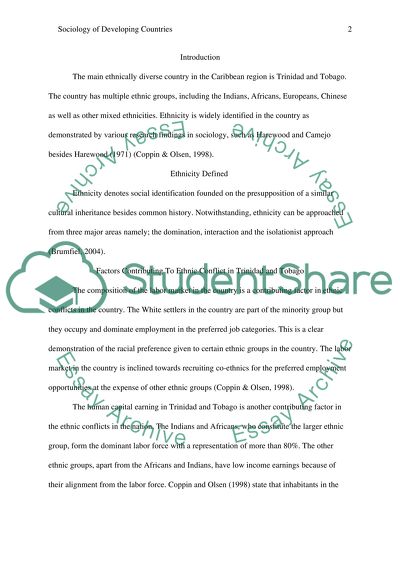 Running head: SOCIOLOGY OF DEVELOPING COUNTRIES Sociology of Developing Countries Introduction The main ethnically diverse country in the Caribbean region is Trinidad and Tobago. The country has multiple ethnic groups, including the Indians, Africans, Europeans, Chinese as well as other mixed ethnicities. Ethnicity is widely identified in the country as demonstrated by various research findings in sociology, such as Harewood and Camejo besides Harewood (1971) (Coppin & Olsen, 1998).
Ethnicity Defined
Ethnicity denotes social identification founded on the presupposition of a similar cultural inheritance besides common history. Notwithstanding, ethnicity can be approached from three major areas namely; the domination, interaction and the isolationist approach (Brumfiel, 2004).
Factors Contributing To Ethnic Conflict in Trinidad and Tobago
The composition of the labor market in the country is a contributing factor in ethnic conflicts in the country. The White settlers in the country are part of the minority group but they occupy and dominate employment in the preferred job categories. This is a clear demonstration of the racial preference given to certain ethnic groups in the country. The labor market in the country is inclined towards recruiting co-ethnics for the preferred employment opportunities at the expense of other ethnic groups (Coppin & Olsen, 1998).
The human capital earning in Trinidad and Tobago is another contributing factor in the ethnic conflicts in the nation. The Indians and Africans, who constitute the larger ethnic group, form the dominant labor force with a representation of more than 80%. The other ethnic groups, apart from the Africans and Indians, have low income earnings because of their alignment from the labor force. Coppin and Olsen (1998) state that inhabitants in the country with fair skin color were recruited for employment with low qualifications compared to their counterparts with dark skin color.
The socioeconomic status in the country is associated with the marital status and formation. The marital status of people differs by ethnicity and therefore marriage may be a contributing factor in the ethnic conflicts in the country by widening the ethnicity margin (Olsen, 2009).
Outside Intervention: Reduce or Increase Ethnic Tensions In Trinidad and Tobago
The external interventions may not be necessary for the people of Trinidad and Tobago. This approach may further aggravate the ethnic difference that the country is struggling to bridge. Apprehensions often occur when several ethnic groups stay in close proximity. The approach that the society uses to resolve the differences varies and may make or break it. Trinidad and Tobago has used the internal mechanisms successfully to control and manage the ethnic differences among the communities peacefully. Conflicts and serious tensions have not characterized this developing country because of ethnic differences (Young, 2010). As a result, the external interventions may not be appropriate for the country and may further increase the gap. The internal mechanisms that the country has taken are working out well.
Recommendations of Resolving Ethnic Conflict in Trinidad and Tobago
The marital status of the inhabitants of the nation varies by ethnicity. The ethnic differences in Trinidad and Tobago can be minimized or reduced through increasing the marriages between the differing ethnicities in the country (Olsen, 2009). The differences in the levels of education also contribute to the discrimination in the labor force; hence, bridging the gap between the education level in the country would help reduce the ethnicity associated with employment (Coppin & Olsen, 1998).
Conclusion
Trinidad and Tobago has varied ethnicities but certain ethnic groups are dominant. The ethnic communities in the country have coexisted peacefully because of the successful internal approach the country has opted in dealing with the problem of ethnicity. The labor market best exemplified the challenge of ethnicity, and mixed ethnic marriage is the widespread approach to curb the issue.
References
Brumfiel, E. (2004, January 22). Module 6: What is Ethnicity? Affiliation. Retrieved August 10, 2012, from http://www.indiana.edu/~arch/saa/matrix/aea/aea_06.html
Coppin, A., & Olsen, R. N. (1998). Earnings and Ethnicity in Trinidad and Tobago. Journal of Development Studies , 34 (3), 116-134.
Olsen, R. N. (2009). Marital status in a developing economy: gender, Ethnicity and family structure. Applied Economics , 41, 151-169.
Young, C. (2010, January 13). The Politics Of Cultural Pluralism And Ethnic Conflict. Retrieved August 10, 2012, from http://www.pearsonhighered.com/assets/hip/us/hip_us_pearsonhighered/samplechapter/0205791239.pdf Read More
Share:
Tags
Cite this document
(“Sociology of Developing Countries Essay Example | Topics and Well Written Essays - 500 words - 1”, n.d.)
Retrieved from https://studentshare.org/miscellaneous/1601488-sociology-of-developing-countries

CHECK THESE SAMPLES OF Sociology of Developing Countries

... Globalization The freeness of individuals in the world to interact inconsiderate of their origin and ethnic bounds has increased in the recent past because of the so-called globalization. Globalization has both merits, demerits but it is in concern whether it leads to economic growth, and development of the countries involved, which might be true specializing on the economic globalization. The process of increasing connectivity and interdependence among states has eliminated geographical boundaries and enabled people to intermingle unlike the past. These continued interactions have brought with them many challenges. Globalization has brought a complex flattering effect where most of the developing countries have been practicing... an...
6 Pages(1500 words)Essay

...? Business Assignment 4 of Learning: Q What is human capital and why is it crucial to expand human capital as part of the development process in developing countries? This is a measure of human value in the work place; it is the human employment in any firm. This can also be explained as the economic value of any employee. Human capital can be defined as the ability of a single person or a household to engage time, experience and knowledge in the production process. Human ability to work and produce versus the working capital of any organization places any firm in need of labor which can only be delivered by living beings. This part of investment by any firm can defines any part of then...
3 Pages(750 words)Assignment

...? Developing Countries Culture or ethni plays an important role in the development of a country. Politics, education and economic development of a developing country are associated with the race, ethnicity and culture of that country. Countries which have superior abilities in utilizing or mobilizing its internal resources may develop rapidly than countries which have inferior abilities in doing so. In fact most of the developing countries are not able to develop properly; not because of the lack of...
5 Pages(1250 words)Research Paper

...? “Sociology of Developing Countries” Peasant Based Revolutions in the Twenty First Century & Urban Growth in the LDCs By 11 March Peasant Based Revolutions in Twenty First Century The world has variety of shades and colours when it comes to the people living on this planet. From the rich elites to the poor peasants statuses, casts and creeds have always been a part of every society. The developing as well as the developed communities works along parallel boundaries between the rich and the poor. The negligence of the rights of the poor and the unequal of distribution of wealth has shown a history of creating restlessness among the group of people who are poor. Thus leading to a surge of emotions and resulting in storms known... of cities...
5 Pages(1250 words)Essay

...﻿Diabetes in Developing Countries Diabetes is considered as the disease of modern civilization as more and more people are suffering from this disease. Though the overall causes of diabetes may be different however, the increase in the overall incidences of diabetes suggests that it is fast becoming an important public health issue. In simple terms, diabetes means the blood glucose or blood sugar level is too high. Though the body needs natural level of glucose to actually use it as energy source however, too much of the glucose level may not be good for the body and may result into diabetes. Type-1 Diabetes Type-1 diabetes is often called the juvenile onset diabetes and often occurs to the young...
10 Pages(2500 words)Essay

...[Supervisor Sociology of Developing Countries Sociology in Developing countries Sociology is the complete separation of economy and state, similar to the separation of church and state. The theory of Sociology is based on the private ownership of the means of production, which would equal a completely uncontrolled and unregulated economy where all land is privately owned, only an aspect of that premise is based on individual rights. Sociology recognizes that each individual person is the owner of their own life and has the right to live it fully to their on personal manner and long as he...
9 Pages(2250 words)Essay

...to the other countries' currencies. This vicious cycle prompted Roach to conclude that "China is one of the sources of current world deflation" (People's Daily, 2002). A year after Roach's controversial report, Goldman and Sachs published a Global Economics paper entitled "Dreaming with BRICs: The Path to 2050". In this report, the authors surmised that given the 'right' growth conditions and a lot of luck, four of the biggest developing countries namely Brazil, Russia, India and China (thus forming the BRIC acronym) could become the largest economic force in the world in 50 years possibly even surpassing the G6 economies (US, Japan, UK, France, Italy and Germany). Like China, the...
10 Pages(2500 words)Essay

...INTRODUCTION Features of Developing Nations At the initial start of this written; there is needs to begin with making introduction of the key factor of the essay, which primarily focuses on Developing Countries. What is meant by developing countries and what are the features of these nations on the Economic basis. In the first phase of this introduction, there is needs to know that these countries that are called the Developing nations have consist of two third of the whole world, they are also found in parts of the word like in Latin America, Africa and Asia. Developing countries a...
9 Pages(2250 words)Essay

...Sociology of Developing Countries SOCIOLOGY OF DEVELOPING COUNTRIES Question The urban poor in developing countries have been subject to debate between those viewing them as conservative and those who consider them radical. Two research schools of thought, however, contradicted the radical notion. First, it was demonstrated that urban poor formed organizations that worked towards housing improvement. They are keenly involved in political aspects that are affecting their livelihood in a direct way. The urban poor are also responsive to varying parameters where they are in operation; they are aware of their...
2 Pages(500 words)Essay
sponsored ads
Save Your Time for More Important Things
Let us write or edit the essay on your topic "Sociology of Developing Countries" with a personal 20% discount.
GRAB THE BEST PAPER

Let us find you another Essay on topic Sociology of Developing Countries for FREE!