Comments (0)
Add to wishlistDelete from wishlist
Cite this document
Summary
Internship is an opportunity in which a student is exposed to work environments in order to facilitate integration of the student’s skills with relevant professional environment. This paper presents my internship report on accounting and marketing.
I achieved the objective,…
Download full paperFile format: .doc, available for editing
HIDE THIS PAPERGRAB THE BEST PAPER98.1% of users find it useful 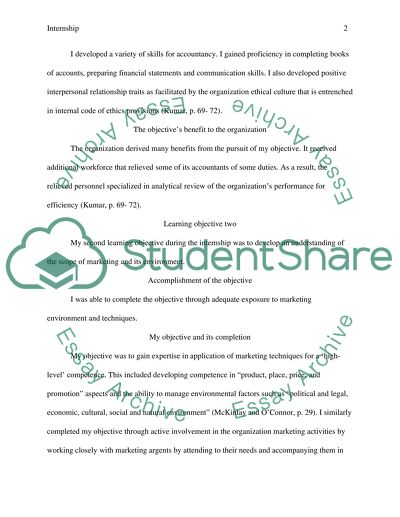 Internship Internship is an opportunity in which a is exposed to work environments in order to facilitate integration of the skillswith relevant professional environment. This paper presents my internship report on accounting and marketing.
Learning objective one
The internship aimed at developing expertise in the professional scopes of accounting.
Achievement of the objective
I achieved the objective, as the organization was effective in exposing me to its working environment. My scope of work for example involved financial accounting processes with duties to observe accounting standards and legal provisions.
My objectives
My personal objective was to achieve ‘self-acquaintance’ in application of financial accounting knowledge in the job market. This included developing competence in collecting, recording, categorizing and analyzing an organization’s financial information for communication to relevant stakeholders to aid informed ‘decision-making’. I completed my objective through active involvement in the organization’s accounting department where I assisted in making journal entries, transferring the information into ledger accounts, preparing financial statements, and analyzing the organization’s financial position. I also achieved my objective by being disciplined to the accounting department and allowing myself to be professionally influenced by the employees (Kumar, p. 69- 72).
Demonstrated skills
I developed a variety of skills for accountancy. I gained proficiency in completing books of accounts, preparing financial statements and communication skills. I also developed positive interpersonal relationship traits as facilitated by the organization ethical culture that is entrenched in internal code of ethics provisions (Kumar, p. 69- 72).
The objective’s benefit to the organization
The organization derived many benefits from the pursuit of my objective. It received additional workforce that relieved some of its accountants of some duties. As a result, the relieved personnel specialized in analytical review of the organization’s performance for efficiency (Kumar, p. 69- 72).
Learning objective two
My second learning objective during the internship was to develop an understanding of the scope of marketing and its environment.
Accomplishment of the objective
I was able to complete the objective through adequate exposure to marketing environment and techniques.
My objective and its completion
My objective was to gain expertise in application of marketing techniques for a ‘high-level’ competence. This included developing competence in “product, place, price, and promotion” aspects and the ability to manage environmental factors such as “political and legal, economic, cultural, social and natural environment” (McKinlay and O’Connor, p. 29). I similarly completed my objective through active involvement in the organization marketing activities by working closely with marketing argents by attending to their needs and accompanying them in their assignments. My level of commitment to and dependence on the experts therefore facilitated achievement of my objective (McKinlay and O’Connor, p. 29).
Developed skills
Through my involvement with the marketing department, I was able to develop analytical skills on the essentials of effective marketing. I for example developed the capacity to regress consumers’ perceived value on a product, based on market’s environmental factors, and price for effective pricing and marketing (McKinlay and O’Connor, p. 29).
Benefits of the objectives to the organization
The organization benefited from additional personnel force to its team that was significantly overwhelmed. It also derived economic benefits from my services that were not rewarded at the same rate as the employees. This is because its understaffing required additional staffing that could have been done at a higher cost to make my input to the organization (McKinlay and O’Connor, p. 29).
Works cited
Kumar, Anil. Entrepreneurship development. New Delhi, India: New Age International, 2008. Print
McKinlay, Irma, and O’Connor, Maria. Marketing. Cape Town, South Africa: Pearson South Africa, 2007 Read More
Share:
Tags
Cite this document
(“Intranship Essay Example | Topics and Well Written Essays - 500 words”, n.d.)
Intranship Essay Example | Topics and Well Written Essays - 500 words. Retrieved from https://studentshare.org/miscellaneous/1601279-intranship

CHECK THESE SAMPLES OF Intranship

Analysis of To Awaken As an Old Lady

...? Analysis of To Awaken As an Old Lady English 2-20 Analysis of To Awaken As an Old Lady Old age is a stage in life where human beings are observed to be undergoing a transformation to a somber existence. Hence the poem talks about the despondency and the misery that curtails old age. To awaken As an Old Lady is a beautifully depicted poem by William Carlos William who talks about old age and death. In the title of the poem the word ‘awakening’ suggests some sort of realization and acceptance that has enlightened the lady and this realization is actually the inevitability of an individual’s demise. The diction of the poem is simple. Although the poem does not contain a structural rhythm yet the simple words merge one thought in to another... Analysis...
2 Pages(500 words)Thesis

...?Nature of Conflict Conflict is a of affairs in which two or more parties apprehend that they have mismatched objectives due to which they think that they are incompatible with one another. Conflicts occur regularly in the workplace environment. Some are little that are resolved easily with a little communication; while, some are big enough that a mediator is hired to negotiate with the parties. The mediator has his own negotiation plans and strategies to solve the problems between the conflicting parties. In organizational context, there are many reasons that give rise to conflicts. Employees of the same level may enter into conflicts but mostly conflicts arise when job satisfaction decreases. This makes the employees enter into hitch... of Conflict...
6 Pages(1500 words)Essay

...?ENGL Comparative Poems During the last couple weeks, we were studying several poems from different poets. All the poems we learned in have different subjects or themes. John Keats starts his poem Ode to a Nightingale by his painful feeling. He wants to avoid life’s problems. In his Ode on a Grecian Urn, he started with silence and questions. When we look at both poems’ topic we can see there is a relationship between them. The two have a number of similarities and they also have differences. In the differing side we see in Ode to a Nightingale the poet starts with his own heartache and sleepy feeling. He speaks as though he is under some kind of drug. He imagines that he hears nightingale singing in somewhere and not envious... Comparative Poems...
3 Pages(750 words)Essay

CT Program should be nationally recognized by JRCERT and the ARRT

In that, it does not leave the reader questioning about the seriousness of the writer. Additionally, the font makes the reader curious about the information is written down or the information they are about to read. Times New Roman typeface creates a decent impression especially when written in a business or school setting as it shows that the student or individual knows what they really want with their life. Additionally, using Times New Roman as a font choice makes the reader see that the person is bold in their writing, as it shows confidence and understanding of what the person needs. For example, when written in a resume compared to other fonts such as the Comic Sans, it shows that the job applicant is serious and is worthy of the job...
1 Pages(250 words)Essay

Analyze the play and characters

... Play and Character Analysis The second scene of Alani Apio’s play, Kamau, is very essential to the flow of events in the whole literary work. In this particular scene, the company in which Alika is an employee acquired the land Alika and his family has been living on ever since. It is brought forth that the land was never theirs; they were just tenants. Within the same time period, Alika gets promoted to the management position within the company; thanks to his boss’s recommendation to the haoles who are the owners of that company. Jim Mortenson, his boss, also convinces the company owners to help Alika and his family in their relocation citing that Alika is a great employee. Alika’s cousin, Michael, is however not taking the issue lightly...
2 Pages(500 words)Essay
sponsored ads
Save Your Time for More Important Things
Let us write or edit the essay on your topic "Intranship" with a personal 20% discount.
GRAB THE BEST PAPER

Let us find you another Essay on topic Intranship for FREE!