Comments (0)
Add to wishlistDelete from wishlist
Cite this document
Summary
In operant conditioning, which is a psychological method of modifying one’s behavior, reinforcement and punishment are the core tools to either prompt or cease a specific or desired behavior (Chance, 2003). Reinforcement comes in two forms, positive and negative. Positive…
Download full paperFile format: .doc, available for editing
HIDE THIS PAPERGRAB THE BEST PAPER91% of users find it useful 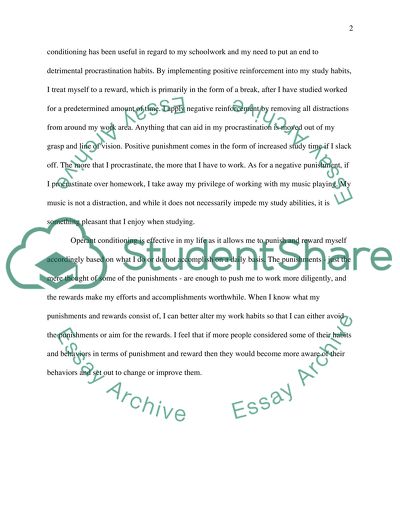 Operant Conditioning In operant conditioning, which is a psychological method of modifying one’s behavior, reinforcement and punishment are the coretools to either prompt or cease a specific or desired behavior (Chance, 2003). Reinforcement comes in two forms, positive and negative. Positive reinforcement involves the introduction of a reward, which would prompt the repetition of a desirable action. As an individual is presented with this reward, they would be more willing to repeat the action. The purpose of positive reinforcement is to encourage behavior through a desired reward, something positive to appease the subject. Negative reinforcement occurs when a specific behavior is encouraged by the ceasing of a negative condition. Something negative is removed to entice the prevalence of a wanted behavior. Therefore, negative reinforcement seeks to encourage an individual by taking away something that they do not like.
Like reinforcement, punishment is also viewed in terms of positive and negative. Positive punishment requires the presentation of a displeasing and unwanted stimulus. When an individual displays a negative behavior, they are presented with the displeasing stimulus immediately after, which helps to discourage the repetition of that behavior (Stangor, 2010). The purpose of positive punishment is to avoid being presented with the negative stimulus, which can only be done by ceasing the behavior. Negative punishment occurs when something that the individual finds enjoyable is taken away in response to unacceptable or unapproved behavior. This aspect of the punishment system is to avoid having that good thing removed, therefore prompting the individual to cease with their unwanted behavior.
Operant conditioning has proven to be a very beneficial system in the daily lives of many individuals who wish to increase or cease entirely certain behaviors. In my personal life, operant conditioning has been useful in regard to my schoolwork and my need to put an end to detrimental procrastination habits. By implementing positive reinforcement into my study habits, I treat myself to a reward, which is primarily in the form of a break, after I have studied worked for a predetermined amount of time. I apply negative reinforcement by removing all distractions from around my work area. Anything that can aid in my procrastination is moved out of my grasp and line of vision. Positive punishment comes in the form of increased study time if I slack off. The more that I procrastinate, the more that I have to work. As for a negative punishment, if I procrastinate over homework, I take away my privilege of working with my music playing. My music is not a distraction, and while it does not necessarily impede my study abilities, it is something pleasant that I enjoy when studying.
Operant conditioning is effective in my life as it allows me to punish and reward myself accordingly based on what I do or do not accomplish on a daily basis. The punishments - just the mere thought of some of the punishments - are enough to push me to work more diligently, and the rewards make my efforts and accomplishments worthwhile. When I know what my punishments and rewards consist of, I can better alter my work habits so that I can either avoid the punishments or aim for the rewards. I feel that if more people considered some of their habits and behaviors in terms of punishment and reward then they would become more aware of their behaviors and set out to change or improve them.
References
Chance, P. (2003). Learning and behavior (5 ed.). Toronto: Thomson-Wadsworth.
Stangor, C. (2010). Learning. Introduction to psychology (pp. 197-220). Irvington, New York: Flat World Knowledge. Read More
Share:
Tags
Cite this document
(“Operant Conditioning PS240 WK4 Term Paper Example | Topics and Well Written Essays - 500 words”, n.d.)
Retrieved from https://studentshare.org/miscellaneous/1600436-operant-conditioning-ps240-wk4

...?Operant Conditioning Introduction Many studies have shown that individual stimuli can control responses by operant conditioning, and there have beenattempts to show that a combination of these stimuli will give a greater response than when taken individually. The purpose of the current study is to explore the effects of both odor and tone on naive rats in a laboratory setting to ascertain how these stimuli, when combined, affect rat behavior above the free operant baseline. The experiment was conducted on four naive rats kept under strictly controlled conditions, each identical to the other to preserve any bias towards any one situation. Overall, the aim of the study was to explore how the different stimuli outlined above work... in...
4 Pages(1000 words)Essay

...? Operant Conditioning 1st, July Learning is a continuous process in life, as people learn new things every day, which change different aspects of their behavior. For this reason, research concerning behavior and learning is crucial, since it is through this that people learn how to change or improve behavior. Knowledge on behavior and learning is applied in different contexts. In parenting, this knowledge is important in order to bring out the best behaviors in children. Different studies have been conducted on learning and behavior, and some theorists have developed theories, which help in explaining learning and behavior in humans and animals. Some of these theories include classical...
4 Pages(1000 words)Term Paper

1 Pages(250 words)Essay
sponsored ads
Save Your Time for More Important Things
Let us write or edit the term paper on your topic "Operant Conditioning PS240 WK4" with a personal 20% discount.
GRAB THE BEST PAPER

Let us find you another Term Paper on topic Operant Conditioning PS240 WK4 for FREE!