Comments (0)
Add to wishlistDelete from wishlist
Cite this document
Summary
This paper is concerned of other effective therapeutic interventions as the statement of the problem. The following research questions are the highlight of this paper:
The present paper assumes…
Download full paperFile format: .doc, available for editing
HIDE THIS PAPERGRAB THE BEST PAPER93.3% of users find it useful 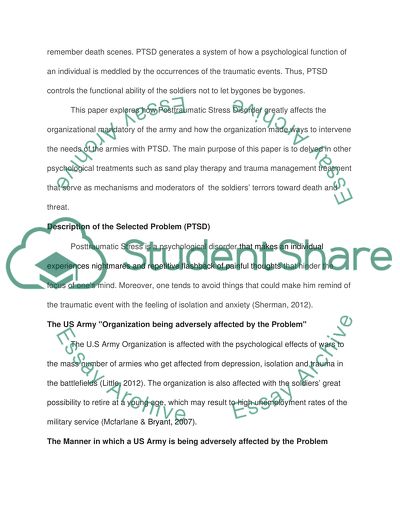 Treatment and Care for Soldiers who return from Combat with Post Traumatic Stress Syndrome ment of the Problem and Research Questions The behavioral manifestations of PTSD require a rigid collaboration of treatments. This paper is concerned of other effective therapeutic interventions as the statement of the problem. The following research questions are the highlight of this paper:
What kind of family therapy is effective in intervening PTSD?
What kind of behavioral therapy is effective in treating soldiers with PTSD?
Hypotheses
The present paper assumes that sand Play therapy is an effective family therapeutic method for soldiers with PTSD (Moon, n.d.). This therapy may be effective in terms of engaging the family where a soldier expresses his emotions in a three-dimensional box of sand by displaying small miniatures of soldier toys in the box. This paper also hypothesizes the effectiveness of trauma management therapy as a behavioral treatment (Frueh, Turner, Beidel, Mirabella, & Jones, 1996). This therapy would make the soldiers learn how to manage their anger and how to function normally. Thence, this paper would like to validate the effectiveness of sand play therapy and trauma management in treating soldiers who suffer from the impediments of PTSD.
Rationale
Posttraumatic Stress Disorder (PTSD) has been considered as one of the major problems of the U. S Army organization because it triggered the thoughts of soldiers to remember death scenes. PTSD generates a system of how a psychological function of an individual is meddled by the occurrences of the traumatic events. Thus, PTSD controls the functional ability of the soldiers not to let bygones be bygones.
This paper explores how Posttraumatic Stress Disorder greatly affects the organizational mandatory of the army and how the organization made ways to intervene the needs of the armies with PTSD. The main purpose of this paper is to delved in other psychological treatments such as sand play therapy and trauma management treatment that serve as mechanisms and moderators of the soldiers’ terrors toward death and threat.
Description of the Selected Problem (PTSD)
Posttraumatic Stress is a psychological disorder that makes an individual experiences nightmares and repetitive flashback of painful thoughts that hinder the focus of one’s mind. Moreover, one tends to avoid things that could make him remind of the traumatic event with the feeling of isolation and anxiety (Sherman, 2012).
The US Army "Organization being adversely affected by the Problem"
The U.S Army Organization is affected with the psychological effects of wars to the mass number of armies who get affected from depression, isolation and trauma in the battlefields (Little, 2012). The organization is also affected with the soldiers’ great possibility to retire at a young age, which may result to high unemployment rates of the military service (Mcfarlane & Bryant, 2007).
The Manner in which a US Army is being adversely affected by the Problem
A US soldier with PTSD gets affected because his performance will deteriorate and conflicts in the family will start to arise (Nelson, 2012). Moreover, a US soldier gets affected when he suppresses his fear to ask for help because he is afraid to be perceived as weak (Sherman, 2012).
The Perceived Benefits for the Organization Associated with Potentially Solving the Problem
The U.S Army organization promotes ways in dealing with the problem of PTSD. Recently, the U.S Army spent 171 million dollars to support the behavioral treatment of the soldiers (Nelson, 2012). Hence, money in the organization can be perceived as one of the trajectory ways in solving the problem for the U.S Army. Consequently, the U.S Army’s organization did their part in handling their duties and responsibilities as the employer of the armies who fought for the country.
Reference
Frueh, B. C., Turner, S. M., Beidel, D. C., Mirabella, R. F., & Jones, W. J. (1996).
Trauma Management Therapy: A preliminary evaluation of a multicomponent
behavioral treatment for chronic combat-related PTSD. Behaviour Research and Therapy, 34 (7), 533−543.
Little, V. (2012, June 20). Post heightens awareness of PTSD programs. Army.Mil.
Retrieved from http://www.army.mil/article/82140/
Post_heightens_awareness_of_PTSD_programs/
McFarlane, A. C., & Bryant, R. A. (2007). Post-traumatic stress disorder in
occupational settings: Anticipating and managing the risk. Occupational
Medicine, 57, 404-410.
Moon, P. K. (n.d.). Sand play therapy with U.S soldiers diagnosed with PTSD and their
families. Virginia, VA: Vistas Online.
Nelson, K. E. (2012, June 27). Capitol hill PTSD awareness event highlights struggles,
triumphs. Army.Mil. Retrieved from http://www.army.mil/article/82665
Sherman, B. (2012, June 14). PTSD: Knowing what’s wrong, getting help. Army.Mil.
Retrieved from http://www.army.mil/article/81779/
PTSD__Knowing_what_s_wrong__getting_help/ Read More
Share:
Tags
Cite this document
(“Support for Soldiers who return from combat affilicited with PTSD Assignment”, n.d.)
Support for Soldiers who return from combat affilicited with PTSD Assignment. Retrieved from https://studentshare.org/miscellaneous/1600220-support-for-soldiers-who-return-from-combat-affilicited-with-ptsd

“Support for Soldiers Who Return from Combat Affilicited With PTSD Assignment”, n.d. https://studentshare.org/miscellaneous/1600220-support-for-soldiers-who-return-from-combat-affilicited-with-ptsd.
Comments (0)
Click to create a comment or rate a document

...published in August 2008, in Croatian medical journal, which is an open literary journal which invites the medics and health experts from all over the world to write experts reports and articles on diverse health related issues and their solutions. Croatian medical journal is fully indexed and reviewed by CC/CM, Index Medicus/MEDLINE, Biosis, Excerpta Medica and ExtraMED (Hrcak, 2011). The addressed article focuses on studying the posttraumatic stress disorder (PTSD) in the war veterans that have come from different war zones. The goal of the study is to find out the ratio of the posttraumatic stress disorder (PTSD) among the soldiers who stay away from their wives for a...
4 Pages(1000 words)Research Paper

...disability were more susceptible to the risk of the combat-related PTSD after exposure to a similar condition of battle within a similar duration of time. The research that exposed such things took place before the American soldiers went for a peace-keeping engagement in the Iraq or Afghanistan. (Haskell, Gordon, Mattocks, Duggal, Erdos, et al. 2010). The research discovered that before deployment, only three percent of the soldiers had mental illness of any kind but which could not incapacitate them to engage in the battle with the terrorist. On return, the populace of the soldiers who had PTSD symptoms...
10 Pages(2500 words)Research Paper

...? Posttraumatic Stress Disorder Malisa Anderson Liberty Posttraumatic stress disorder (PTSD) should be paid much attention to because many people suffer from it even not knowing about their diagnosis. Those who suffer from posttraumatic stress disorder or have some inclinations toward this disorder should tend to avoid places, people and other things, which can somehow remind them about those dramatic events in their life, which became the reason of their disorder. The illness itself is relatively young. It was revealed in 1980, nevertheless, became a subject of a great controversy. The issue is worth-discussing, thus the given paper will try to explain the essence of the disease and it is connection with...
11 Pages(2750 words)Research Paper

...but a lot of victims of harmful incidence are now experiencing PTSD. It is a type of anxiety disorder often accompanied by nightmares, flashbacks of the traumatic or harmful event, depression, stress, hopelessness and loss of interest in activities (“Post-Traumatic Stress Disorder”). A survey from 6, 201 soldiers was conducted and results show that 16-17% who fought in Iraq showed symptoms of PTSD. On the other hand, 11% of those who fought in Afghanistan were said to be experiencing signs of PTSD. This is because those who served in Iraq have seen more violence like firefights, attacks, and combats than...
11 Pages(2750 words)Essay

PTSD: Treatment of Soldiers Returning from The Middle East

...soldiers, either because the combat experience is changing or mental health specialists are becoming better equipped to identify and diagnose symptoms. Changes in the number of returning soldiers diagnosed with PTSD directly affect the ability of public organizations like the Veterans Administration to effectively deal with the problems of returning soldiers, which federal and state governments are legally obligated to do. Currently, a fundamental incapacity exists in the system established to address the mental and physical health of returning soldiers, which is overwhelmed by the...
7 Pages(1750 words)Term Paper

...was not done to care for the Afghanistan war veterans and many of them plunged into alcohol problems, crime and suicide upon their return. But fortunitely enough new treatment programs are emerging that assist the veterans who suffer from post-combat mental health problems such as depression and post traumatic stress disorder. Cognitive Behavioral Therapy (CBT), is becoming an imperative method for the treatment of the mental health issues among the military and veteran community, and is currently considered the standard of care for depression and PTSD by even the United States Department of Defense. CBT is a psychotherapeutic approach that aims to change the patterns of...
5 Pages(1250 words)Essay

The Undetected Occurrence of PTSD in Soldiers

...platform for individuals who may be affected indirectly by traumatic events such as soldiers. E. If applied effectively, these intervention methods could provide the necessary channels for the detection, prevention and treatment of the occurrence of PTSD amongst the soldiers. Annotated Bibliography Agaibi, C. E., & Wilson, J. P. (2005). Trauma, PTSD, and resilience: A review of the literature. Trauma, Violence, and Abuse, 6(1): 195-216. This article provides an overview of the trauma that result from violent and abusive actions with regard to PTSD victims. Thus, soldiers suffering from PTSD may fail to...
6 Pages(1500 words)Assignment

...-Traumatic Stress Disorder. According to Turner and Jakupcak (2010), traumas that results to huge and severe experiences have high chance of generating PTSD as compared to lesser severe traumas. A good example of an experience that resulted to different level of PTSD was the Vietnam War. During the war, military personnel who were involved in air bombardment and use of dangerous and sophisticated weapons experienced a higher PTSD as compared to those who combated by use of few weapons (Bremner et al, 1996). Similarly, the possibility of getting PTSD when one experiences events that affects self esteem of a person or...
8 Pages(2000 words)Research Paper

PTSD as it relates to military combat

...traumatic stress disorder. Social and Behavioral Sciences, 5, 262–266. The purpose of this study was to show the effect of behavioral treatments on quality of life. The method used involved the study of 60 Iranian combats who participated in war between Iran and Iraq. SF-36 questionnaire was used for evaluation. The result was that behavioral interventions of military combats improved quality of life. Alhajjar, B. (2014). 4th World Conference on Psychology, Counseling and Guidance WCPCG- 2013 Gaza Nurses After War: Are They Traumatized? Social and Behavioral Sciences, 114, 802 – 809. The study seeks to determine the relationship between war exposure and PTSD among...
4 Pages(1000 words)Annotated Bibliography

...to the case in Massachusetts where 7% of the children develop the condition at kindergarten. These trauma- related events have been as some of the most costly health problems. Events that involve interpersonal violence such a rape or sexual violence give rise more to PTSD than other events. According to Yehuda (2002), PTSD developed in 55 percent of persons who reported being raped. Statistically among adults who have reported having experienced a traumatic sensor are women who are twice as many as men. Certain types of traumatic events have high conditional probability of being followed by PTSD for example rape, childhood sexual and...
1 Pages(250 words)Essay
sponsored ads
Save Your Time for More Important Things
Let us write or edit the assignment on your topic "Support for Soldiers who return from combat affilicited with PTSD" with a personal 20% discount.
GRAB THE BEST PAPER

Let us find you another Assignment on topic Support for Soldiers who return from combat affilicited with PTSD for FREE!