Comments (0)
Add to wishlistDelete from wishlist
Cite this document
Summary
It is an inventive modern story based on two characters that are called to Denmark by hamlets uncle who is the king of Denmark. The two are given the task of cheering the king…
Download full paperFile format: .doc, available for editing
HIDE THIS PAPERGRAB THE BEST PAPER94% of users find it useful 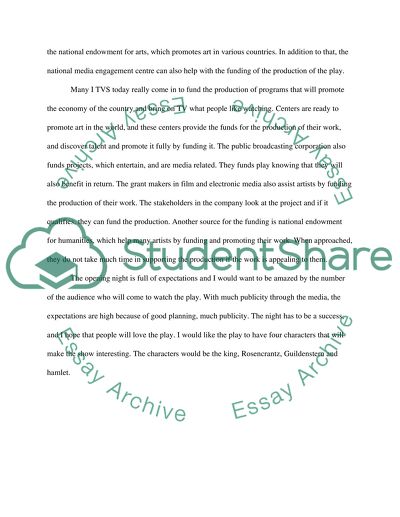 Extract of sample "Rosencrantz and Guildenstern Are Dead by Tom Stoppard"

Rosencrantz and Guildenstern are dead This play is action based with brief appearances of the major characters that help in forming its plot. It is an inventive modern story based on two characters that are called to Denmark by hamlets uncle who is the king of Denmark. The two are given the task of cheering the king up and when this fails, the king realizes that hamlet is a threat to his life, and sends people to kill hamlet. The most interesting part of the play is when hamlet realizes that Rosencrantz and Guildenstern are dead and the fact that the whole play tries to explain why the two died. The death of the two minor characters is very tragic and depicted in a manner similar to the death of a major character in any play. The deaths are given some importance even though they are not very meaningful, every man is mortal and will at one time die (Stoppard 110).the play is also full of humor and the use of suspense which brings about the need for the people wanting to watch more of the play.
For the play to be produced, it will seek funding from various places like the corporate support. Private institutions and business help in the funding through the PBS general fund though the funds are very limited and cannot sustain the whole production. In addition, the production of the play funded by the program also funds television based programs and those projects that have goals and objectives that are well established. The other source of funding is the national endowment for arts, which promotes art in various countries. In addition to that, the national media engagement centre can also help with the funding of the production of the play.
Many I TVS today really come in to fund the production of programs that will promote the economy of the country and bring on TV what people like watching. Centers are ready to promote art in the world, and these centers provide the funds for the production of their work, and discover talent and promote it fully by funding it. The public broadcasting corporation also funds projects, which entertain, and are media related. They funds play knowing that they will also benefit in return. The grant makers in film and electronic media also assist artists by funding the production of their work. The stakeholders in the company look at the project and if it qualifies, they can fund the production. Another source for the funding is national endowment for humanities, which help many artists by funding and promoting their work. When approached, they do not take much time in supporting the production if the work is appealing to them.
The opening night is full of expectations and I would want to be amazed by the number of the audience who will come to watch the play. With much publicity through the media, the expectations are high because of good planning, much publicity. The night has to be a success, and I hope that people will love the play. I would like the play to have four characters that will make the show interesting. The characters would be the king, Rosencrantz, Guildenstern and hamlet.
Hamlet receives much attention in the play.
Guildenstern and Rosencrantz are minor actors who later die.
Category 4 represents the king who orders the death of the two minor characters.
The show will have the stage for the performance, the place where the audience will sit and finally the backstage.
Backstage
Stage
Audience
Works cited
Stoppard, Tom.Rosenncrantz, and Guildenstern are dead. Britain: Grove press .1994.Print. Read More
Share:
Tags
Cite this document
(“Rosencrantz and Guildenstern Are Dead by Tom Stoppard Movie Review”, n.d.)
Retrieved from https://studentshare.org/miscellaneous/1598748-rosencrantz-and-guildenstern-are-dead-by-tom-stoppard

“Rosencrantz and Guildenstern Are Dead by Tom Stoppard Movie Review”, n.d. https://studentshare.org/miscellaneous/1598748-rosencrantz-and-guildenstern-are-dead-by-tom-stoppard.
Comments (0)
Click to create a comment or rate a document

...?Tom Bradley was the first African American mayor of the with overwhelming majority of white population. What more, he became five-term Mayor ofLos Angeles, major and fast growing city in California. For ten years he was a City Councilmen and served in police for over twenty years. Tom Bradley was born December 29, 1917 in rural Texas in the family of poor sharecroppers. His grandfather was a slave. When he was 7, his family moved to Los Angeles and he grew up on Central Avenue in a small black community. Back at those times people were there for each other, ready to land a helping hand. At some point the family went on public assistance. His parents divorced and Tom’s mother was working...
5 Pages(1250 words)Research Paper

...?Up s occur every 1440 minutes. Comparison and Contrast of Shakespeare's Hamlet and Tom Stoppard's Rosencrantz and Guildenstern Are Dead Hamlet contrasts the text in the Stoppard’s play, in that each play highlights similar issues, concerns and themes centered on different societies, values and contexts. Each play tests if the audience understands the other play, and they both echo the composition context. This paper explores the comparison between Stoppard’s play, and Shakespeare’s Hamlet showing the textual relationship between these plays and period they were written. Hamlet was written in 1601 Elizabethan era by...
5 Pages(1250 words)Essay

...in which Hamlet is comparable to another play within its own era, or within a subsequent era. With this understanding in mind, the express focus of this brief analysis will be with regards to comparing William Shakespeare’s “Hamlet” with Tom Stoppard’s “Rosencrantz and Guildenstern are Dead”. Rather than merely coming to the delineation that these two plays are from different eras and represent a specific and unique take upon the realities that define life, it is the hope of this author that the forthcoming analysis will be beneficial in helping the reader to understand specific dynamics of these plays, specific approaches of the authors, and a specific...
5 Pages(1250 words)Essay

...? Is “Brain Death” Really Dead IS “BRAIN DEAD” REALLY DEAD? Brain death is a mainstreamed rationale, equated to death itself. The brain is an integrative unit in the whole of the human body that transforms every organ and tissue as one whole organism. The myriad and integrated functions of the brain are not, really, brain mediated neither are they somatically integrated. The role of the brain is modular in respect to the vitality of organs that make up the human body and tissues. Medical practitioners, like the doctors, come up with conclusions on constitutive enhancement of the potential survival and quality of a living organ. The brain involves a mutual interaction with all the other...
4 Pages(1000 words)Essay

...What is British about contemporary British Fiction Discuss with reference to any two from the second half of the Tom Stoppard's Rosencrantz and Guildenstern Are Dead and Harold Pinter's The Caretaker. The question of "what is British about contemporary British Fiction" is an interesting one in a number of ways. First of all, the nature of what it means to be "British" needs to be considered, or even whether the term is so generic as to render it meaningless. Second, are there common features to be found within very contrasting works of literature that can be said to be normative If the first two questions are answered satisfactorily, can the term...
9 Pages(2250 words)Essay

...# 138134 No one titillates the book-reading world better than Tom Clancy and his never-ending string of publishing successes that stand out not only in terms of record-breaking frequency and amount of sales but also because he is considered the unlikeliest man to write them. For example, John Grisham is a certified hit-maker with his legal thrillers but this astonishes no one because he was once a top-notch lawyer. The same thing can be said about Michael Crichton, whose medical thrillers bristle with authenticity because the man used to be a full-fledged doctor. Tom Clancy is something else again. The flap jacket of Tom Clancy's first successful book, The Hunt for Red October,...
10 Pages(2500 words)Essay

...their own laws which is something Jay Gatsby learns to his unfortunate detriment at the end of the story. This is why Daisy chose Tom: she realized that Gatsby was too poor and too delusional. Daisy is a character who grows throughout the story and realizes what dreams can do. Gatsby may be rich, but in a way he is living a dream. He thinks he can go back in the past and make the wrong things right again, he thinks he can make Daisy love him again. In a way Gatsby is delusional. He has bought into a dream that financially rewarded him, but the substance of the dream is gone—all that is left is the material husk, shiny and rich, but with nothing real inside it. He has bought the shape of the dream, but not the American...
2 Pages(500 words)Essay

...Is “Brain Dead” Really Dead? Affiliation Brain death is a clinical manifestation characterized by irreversible cessation of all the functions of the human brain, including the brain stem. Irreversible cessation of brain functions has been used as the clinical basis for certifying death. The process of determining brain death is complex and is thus required to be done by specialist doctors who possess experience in diagnosis. Recognition of brain death is crucial in medical practice given the medical, bioethical and legal contestations associated with brain death. Traditionally, permanent cessation of the respiratory and cardiovascular functions was relied on to determine death. Advances in medical knowledge and practice have made... ...
6 Pages(1500 words)Research Paper

Hamlet vs. Rosencrantz and Guildenstern are Dead

... William Shakespeare’s Hamlet William Shakespeare is one of the legends in the field of literature. He has done many plays that have various significances to the readers. In his work there are themes that he normally intends to pass across to readers. This makes his work as a poet easier and enjoyable to read or watch. In this paper, a critical analysis is focused on one of William Shakespeare’s plays, Hamlet. The purpose of the paper is also to analyze, compare, and contrast various aspects of the play in relation to other plays that are in similar category. In this play Hamlet done by William Shakespeare, the main character, who is referred to be the heir to the Danish throne, fights to recover from the aftermath of his... William...
5 Pages(1250 words)Essay

...Tom Hoffman’s Drawings At first glance, Tom Hoffman’s drawings are expressive, sentimental, and commonplace. The drawings shown on his website are, on the surface, simple and straightforward. For instance, there is a drawing showing a man sitting on a couch and reading a book, and there is another depicting a lush river, and one portraying a two men looking at different directions (Hoffman, nd). Apparently, the drawings are mundane, but on a deeper perspective the drawings articulate profound meanings. Tom Hoffman’s drawings were not created out of the blue. His drawings are perhaps one of the best sketches, emotive drawings, and life drawings. His sketches clearly express his immediate...
1 Pages(250 words)Essay
sponsored ads
Save Your Time for More Important Things
Let us write or edit the movie review on your topic "Rosencrantz and Guildenstern Are Dead by Tom Stoppard" with a personal 20% discount.
GRAB THE BEST PAPER

Let us find you another Movie Review on topic Rosencrantz and Guildenstern Are Dead by Tom Stoppard for FREE!