Comments (0)
Add to wishlistDelete from wishlist
Cite this document
Summary
Hence, utilizing images of varied objects to transmit the intended information, which may be shallow if put in simple words1. Additionally,…
Download full paperFile format: .doc, available for editing
HIDE THIS PAPERGRAB THE BEST PAPER95% of users find it useful 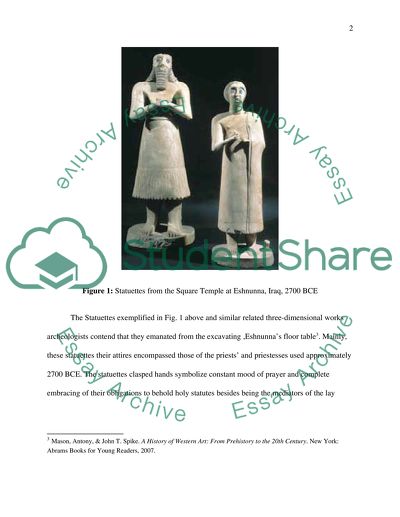 Western Art History (AHIS ­­­­­­­­­­­­­­­­­­­­Introduction The innovative work of an artist normally serves the purpose of relaying certain information that is unexplainable utilizing mere words. Hence, utilizing images of varied objects to transmit the intended information, which may be shallow if put in simple words1. Additionally, the kind of artistic work owing to its appearance normally aids in unveiling the period, and activities that surrounded it or its role by then, for illustration Fig. 1 whose main aspect is religion2. Fig. 3 image offers immense information regarding Sumerian power and execution of justice that entailed war enemy soldiers. Visual representation of an artistic work normally has numerous depictions and implication, which words may fail to relay or transmit.
Figure 1: Statuettes from the Square Temple at Eshnunna, Iraq, 2700 BCE
The Statuettes exemplified in Fig. 1 above and similar related three-dimensional works archeologists contend that they emanated from the excavating ,Eshnunna’s floor table3. Mainly, these statuettes their attires encompassed those of the priests’ and priestesses used approximately 2700 BCE. The statuettes clasped hands symbolize constant mood of prayer and complete embracing of their obligations to behold holy statutes besides being the mediators of the lay people4. According to the people’s notion by then, the statuettes were votive figurines. This implied that the faithful would leave the images in the temple as a form, worship, or prayer where in some incidents; the people attributed them to answered prayers. The keen observance of the statuettes’ faces bearing wide stares signifies vigilance regarding their prayerful obligations. The faithful besides leaving the statuettes in the temple, the human priests or priestesses, aroused amid them the utter assurance of receiving what they had inquired from the gods. This was during Mesopotamian period whose characteristics encompassed Warrior art besides narration in stone relief.
,
Figure 2: The Standard of Ur, Royal Cemetery, Ur, Iraq, 2600 BCE
Fig. 2 comprises of two artistic dimensional panels commonly referred as “war” and “peace” respectively, depicting the earliest Sumerian’s power5. War art panel depicts soldiers on donkey- drawn chariots at warfront besides utter termination of captive soldiers using axes.  The rest paraded before the king naked to face their death via spearing. Conversely, the peace panel comprises of numerous animals and fish besides other merchandises and gifts in a procession heading to a banquet6. The attire of the seated figures comprise of fringed skirts and fleece; implying they are top bureaucrats in the empire after the war and numerous such events that entailed celebration like Queen Pu-abi seal. The two art panels exemplify both the Sumerian social and political structure clearly and adequately depicted. Besides, there are exemplification of economic stability and justice entailing how the kingdom dealt with soldiers who were their adversaries7. Hence, the entire artistic image resembling Sumerian army and its power besides acting as a tool to propagate their ideas not only to the present populations, but also to this incoming.
Figure 3: Ziggurat at Ur, Iraq, 2100 BCE
Ur’s ziggurat 70 feet structure having the base almost the size of a football pitch, its core purpose entailed religious. The erection of ziggurats used to exist in 4Th to 6Th Millenniums BC and comprised of multi-platform tower with stairways climbing up on its sides besides the top-center-placed temple (Nanna) located at its top8. The structure to the Ur’s natives acted as a vocal point to the travelers owing to its visibility from far besides religious and physical nourishment. Since, the natives used to take surplus to the Nanna temple where they deemed the city’s god protector used to abode. Some studies contend the idea of ziggurats might have emanated from the famous “Tower of Babel” though having some diverse modifications9.
Conclusion
It is irrefutable that numerous artistic works, for instance those entailing history has managed to depict the essence regarding various aspects in those communities that esteemed these artifacts. These aspects encompass political and religious, which did influence the then natives owing to the essence attributed to them. Presently, those former facets in some communities especially religious-related have descended to the current societies and affected their culture in some sectors in a way. For illustration, some of Ziggurat’s practices to date are previously in use, though the westernization has eroded some. These entail the aspects of numerous gods prior the idea of deeming in a monotheistic worship emerged.
References
Mason, Antony, & John T. Spike. A History of Western Art: From Prehistory to the 20th Century. New York: Abrams Books for Young Readers, 2007. Read More
Share:
Tags
Cite this document
(“Western Art History class (AHIS 1) Essay Example | Topics and Well Written Essays - 500 words”, n.d.)
Western Art History class (AHIS 1) Essay Example | Topics and Well Written Essays - 500 words. Retrieved from https://studentshare.org/miscellaneous/1598174-western-art-history-class-ahis-1

... HISTORY OF ART Part One: Jan Van Eyck, Arnolfini’s Wedding, 1434 vs. Diego Velasquez, Las Meninas, 1656 Jan van Eyckand Diego Velasquez are revered as baroque influential artists. They did several masterpieces which to date continue to give insight as to what Renaissance art entailed. Eyck in 1434 made a portrait of the wedding between Giovanni Arnolfini with his second bride, Jeanne de Cenami. This portrait is known as “the Arnolfini Marriage”. Diego Velasquez also made a portrait known as “Las Meninas” which doubles as an aesthetic as well as an intellectual piece. This piece was made in 1656, and exhibits some similarities to “The Arnolfini Marriage.” Velasquez uses refined technicalities, and combines them with profound... the sculpture...
4 Pages(1000 words)Essay

...and Section # of Non-western art history (Museum paper) I visited Asia Pacific museum, isone of the four museums in the country, who specialize in the arts and culture of Asia and Pacific region and the museum contains a lot of art work from various artists of Asia and Pacific region. The mission of the museum is to make people aware and to make them know about the culture and art of the region, which is not well known to them. I have seen many art pieces of the Asian origin and the ones who represent the culture of East and Pacific region. I chose the work of Elizabeth Keith, a painting named, "The Cock Fight", which...
6 Pages(1500 words)Essay

...Study Guide: History of Western Art Gothic Architecture & Development in European Countries Gothic architecture started in the 12th century to the 15th century in Europe and was a dominant architectural style for 400 years. It developed from the Romanesque and Byzantine influences of France. Structures of these styles use vertical tall pillars, spires, pointed arches, and flying buttresses. It is usually evident in Catholic cathedrals, monasteries and churches that have many bigger windows as compared to the structures in the Romanesque era. General characteristics of Gothic architecture are the soaring spaces and quality of light evident in cathedrals, the traditional basilican form...
5 Pages(1250 words)Essay

...A. The Geneva Museum of Art and History is located at Rue Charles-Galland 2 and considered as the largest museum in Switzerland. The building was constructed sometime between 1903 and 1910 clearly reflecting the architecture during that time. This hundred-old museum houses as much as a million artworks. From time to time, certain artworks are placed on exhibit so visitors would learn more about art pieces. The museum is divided into three sectors, namely: Archeology, Applied Arts and Fine Arts. At that time I visited the museum, it showcased the 15th century altarpiece by Konrad Witz “ The Miraculous Draught of the Fish” which is the subject of this...
5 Pages(1250 words)Essay

... Evolution of the Human Figure Creativity is the basis of any artistic work through human history. For instance, the artistic work of the Greek relied on creativity in sculpturing human figure. History reveals that the Greek artist bestowed a lot of importance in human figure as a basis of their artistic work (Hambidge 158). In exploring art in the ancient Greek, four categories appear; Archaic, Geometric, Hellenistic and Classical periods. Each period had a different form of approach in the artistic work. Greek artists used stones and metal such as bronze to make their figures. During the archaic period, the Greek artists used stone to make their sculptures. The Human figure was a very important factor during this period because... such as...
1 Pages(250 words)Essay

...The nude as a central in Western art history Introduction Art is a way through which people find channels (Danto, pg 574) and means of making life beautiful. However, it lacks the best description because it involves many things. Among them are traditions and technological trends. Artists describe the artistic world as that which has a real connection with culture and all events that happen in the present world. In this case, business aspects have won the heart of many artists. Ideally, artists have to show off their creative works to the public and watch out for the criticisms and other responses. This helps he artists to understand the needs of people in relation to...
5 Pages(1250 words)Essay

...proves his great art in painting by designing the real spaces in the drawing, the spaces in mirror, the spaces in picture and the artist style of picture within picture, give painting that is seen in the inclusion of the royal couple portrait behind the daughters picture, the pictures can be interpreted as one picture in one (Kleiner 401-403). This complexity in interpretation makes the painting get good score in masterpiece display. Conclusion The Diego Velazquez painting of the Maid of Honor is one of the greatest painting in the western art history, the artist uses the paint art to communicate several ideas in his painting. I agree and support the...
5 Pages(1250 words)Essay
sponsored ads
Save Your Time for More Important Things
Let us write or edit the essay on your topic "Western Art History class (AHIS 1)" with a personal 20% discount.
GRAB THE BEST PAPER

Let us find you another Essay on topic Western Art History class (AHIS 1) for FREE!