Comments (0)
Add to wishlistDelete from wishlist
Cite this document
Summary
Japan is a world leading economy with many breakthroughs in technology. However, everyone has a history, and so does Japan. Several aspects characterize a nation’s history. They include culture, lifestyle, political, and economic events. As the years go by, these aspects change. This paper takes 3 stops in the history of Japan…
Download full paperFile format: .doc, available for editing
HIDE THIS PAPERGRAB THE BEST PAPER96% of users find it useful 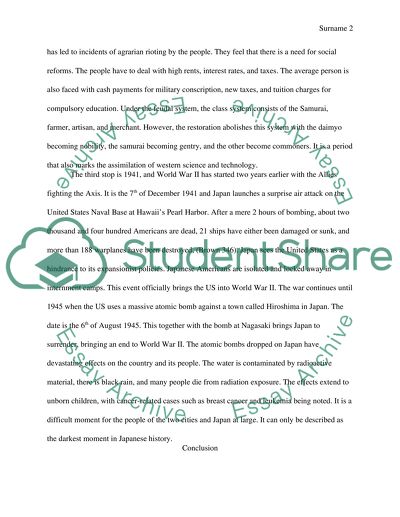 History of Japan Introduction Japan is a world leading economy with many breakthroughs in technology. Talk of motor vehicles, electronic goods, heavy industrial machines, robotics, and other advances in technology and Japan is to be mentioned. However, everyone has a history, and so does Japan. Several aspects characterize a nation’s history. They include culture, lifestyle, political, and economic events. As the years go by, these aspects change. This paper takes 3 stops in the history of Japan.
3 Stops in Japan’s History
The first stop is the year 1837. This is when Tokugawa Leyoshi becomes the 12th Shogun, marking the start of the Tokugawa Empire. Japan at this time returns to anti-western policies. This period is characterized by social and fiscal disruption. The market economy is growing, and there is a complex monetary system is in place. This system is based on agriculture. This system supports both the farming classes, as well as the privileged samurai classes. The samurai classes are rather unproductive. It is a feudal class system that consists of the Samurai, farmer, artisan, and the merchant in that order. During this period, people have to do with high rents and taxes, and harsh living conditions. One peculiar observation is that women are supposed to shave their eyebrows, as well as blacken their teeth. With the conservative and isolationist policies, the country is limited in its participation with global trade. This Tokugawa dynasty ends in 1868 and can be described as a period when Japan does not make any meaningful gains.
The next stop is the 3rd of January in 1868. This marks the start of the Meiji Restoration, which is led by a teenager called Mutsuhito, (Brown 234). It is this restoration that marks Japan’s birth as a modern nation. Just before this restoration, the people of Japan are not a happy lot. They are under a feudal system. People are faced with hard economic times. The feudal system has led to incidents of agrarian rioting by the people. They feel that there is a need for social reforms. The people have to deal with high rents, interest rates, and taxes. The average person is also faced with cash payments for military conscription, new taxes, and tuition charges for compulsory education. Under the feudal system, the class system consists of the Samurai, farmer, artisan, and merchant. However, the restoration abolishes this system with the daimyo becoming nobility, the samurai becoming gentry, and the other become commoners. It is a period that also marks the assimilation of western science and technology.
The third stop is 1941, and World War II has started two years earlier with the Allies fighting the Axis. It is the 7th of December 1941 and Japan launches a surprise air attack on the United States Naval Base at Hawaii’s Pearl Harbor. After a mere 2 hours of bombing, about two thousand and four hundred Americans are dead, 21 ships have either been damaged or sunk, and more than 188 warplanes have been destroyed, (Brown 346). Japan sees the United States as a hindrance to its expansionist policies. Japanese Americans are isolated and locked away in internment camps. This event officially brings the US into World War II. The war continues until 1945 when the US uses a massive atomic bomb against a town called Hiroshima in Japan. The date is the 6th of August 1945. This together with the bomb at Nagasaki brings Japan to surrender, bringing an end to World War II. The atomic bombs dropped on Japan have devastating effects on the country and its people. The water is contaminated by radioactive material, there is black rain, and many people die from radiation exposure. The effects extend to unborn children, with cancer-related cases such as breast cancer and leukemia being noted. It is a difficult moment for the people of the two cities and Japan at large. It can only be described as the darkest moment in Japanese history.
Conclusion
From these stops, it is clear that Japan has had moments of transformation. However, one thing that I have learnt is that the Meiji Restoration marked an important phase in the modernization of Japan. It was a transformation from the feudal Tokugawa Empire which had witnessed a decline in Japan’s economic and social power. The Meiji Restoration introduced economic, social, and military reforms, with Japan opening up to western science and technology. At the same time, the Hiroshima and Nagasaki atomic bombings left a huge scar in Japan. It was a dark period for the nation.
Works Cited
Brown, Delmer M. The Cambridge History of Japan. Cambridge: Cambridge University Press, 1993. Read More
Share:
Tags
Cite this document
(“HistoryOfJapan Essay Example | Topics and Well Written Essays - 750 words”, n.d.)
HistoryOfJapan Essay Example | Topics and Well Written Essays - 750 words. Retrieved from https://studentshare.org/history/1610580-historyofjapan

CHECK THESE SAMPLES OF HistoryOfJapan

Global Competitiveness: the works on the world industry and economy in a global perspective

...? In reviewing the financial events impacting the global economy over the past decade, it is clear that a new monitoring organization must be introduced, and that the monitoring should oversee the so-called “Guardians of Finance,” or marketing regulatory agencies (Barth, Caprio, and Levine). Barth, Caprio, and Levine have provided a detailed analysis of the events that led to the forming of an economic bubble as well as the bubble’s bursting, and have applied careful statistical data to demonstrate the economic circumstances that surfaced throughout. Based on this data, the authors outline the best possible way to proceed and make a series of recommendations to support their argument. The central recommendations of Barth, Caprio, and Levine...
5 Pages(1250 words)Essay

...? Appeasement and Wars Appeasement and Wars Even after decades of his death, Hitler is well remembered for his stern ruling. Hitler was Germany, and Germany was Hitler. He ruled the country with an iron rod. Hitler was born on 20th April, 1889, in a small town of Austria (Bracher 1972, p. 3). He was from a humble family. A lot of his dreams remained as dreams because of his poverty. Hitler was the Chancellor of Germany and Fuhrer, meaning leader, from 1933 and 1934 to his death respectively. He was also the leader of the Nazi regime (National Socialist German Workers Party). It is through this party that Hitler controlled Germany with no mercy (Evans 2006, p. 14). This paper will discuss the universally popular consent of Hitler’s rule... Appeasement...
7 Pages(1750 words)Essay

Why Do College Students Procrastinate

...?Why do College Procrastinate? The life of a college is filled with distractions that unintentionally make them defer doing the proper work on their college requirements. Aside from technological gadgets like tablet PC's, Ipads, and mobile phones, there are also a number of other psychological and physical reasons that tend to provide these students with reasons to procrastinate. This paper will take a look into the non-technological reasons that college students often fall prey to and cause them to procrastinate. Procrastination is an activity that is most seen in the undergraduate level of college students. Some of the reasons that professionals have found to cause procrastination include lack of motivation, deficiencies in self... do College...
4 Pages(1000 words)Essay

... College: Music Assignment Shan’ge was a genre of folk songs sung by the Chinese people. The folk songs were common in therural areas. In ancient china, the folk songs played a crucial role especially in revealing the local identity of individuals in their daily activities. This is because; the songs depicted people’s sincere feelings at that at any particular moment. This is why Shan’ge was originally associated with agricultural work. The folk songs were always sung when people were working in the fields. This gave them morale to work harder (Titon 372). More importantly, the older societies like the jiu shehui sung the folk songs all through multifamily labor exchanges. This was principally during, hoeing, as well as, weeding corn... College: Music...
3 Pages(750 words)Essay

...Application for Entrepreneurial Scholarship The administrator College Applying for Young Entrepreneur Scholarship I am a graduate from EBS Business School. My enthusiasm to remain associated with the academic environment motivates me to apply for an entrepreneurial scholarship. My activities and academic rewards, discussed in the following paper, make me eligible for it. I have conducted various entrepreneurial ventures, during my studies. I have founded an organization named deal-fever, where I worked as customer creationist, which gave me great deal of exposure to the practical environment of the business. On the other hand, I was able to be a part of an organization called Pausa-GmbH as an internee, where I was responsible for cash... for...
1 Pages(250 words)Scholarship Essay

...Leadership in Organizations Leadership in Organizations Part I Reflection on Leadership and Suggestions for MyOwn Development Description of the Experience During the last semester, my friends and I got together and formed a study group with the objective of helping each other in our studies and in improving our grades. We were all very excited about the idea as we recognized the fact that we could really use the extra help. To this end, we conducted a small ballot and I was unanimously selected as the best person to lead the group, this was despite my repeated protests. In my new capacity, I was expected to ensure that the study group would ultimately meet its objective of helping the group members to study together and in the process... in...
12 Pages(3000 words)Essay
sponsored ads
Save Your Time for More Important Things
Let us write or edit the essay on your topic "HistoryOfJapan" with a personal 20% discount.
GRAB THE BEST PAPER

Let us find you another Essay on topic HistoryOfJapan for FREE!