Comments (0)
Add to wishlistDelete from wishlist
Cite this document
Summary
The demographic structures of the country have demonstrated consistence over the last decade. Majority of the population is between the…
Download full paperFile format: .doc, available for editing
HIDE THIS PAPERGRAB THE BEST PAPER92% of users find it useful 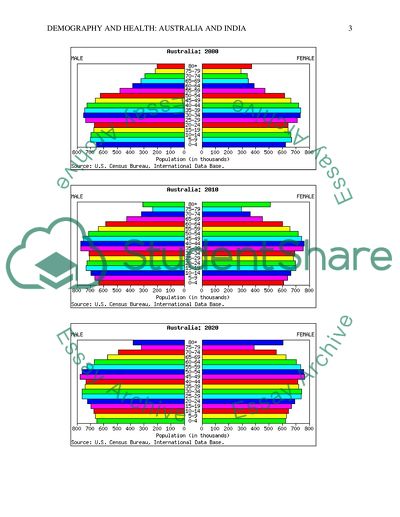 Extract of sample "D5S: Demography and Health: AUSTRALIA AND INDIA"

Demography and Health: Australia and India Demography and Health: Australia and India Australian demographic changes Australia has been recording a steady population increase of over 1.4% over the last two decades, whereby, it recorded a peak of 2.2% in 2008. The demographic structures of the country have demonstrated consistence over the last decade. Majority of the population is between the ages 25 and 55 years. The population group aged between 0 to 24 years, has taken a considerable proportion of the population with the rest dominating the 55 to 80 years bracket. This demographic structure has demonstrated consistent changes, whereby, the number of people in the 55 to 80 age brackets, has been constantly increasing since 2000 and is expected to increase by 2020. Population projections for the year 2020 also demonstrate increase of the elderly. A key point of concern is that the population within the 0 to 25 years bracket, is constant between the years 2000 to 2020. The number of people of the ages 25 to 35 is also expected to increase by the year 2020. The improved healthcare and living standards in Australia is the main reason for the increasing aged population. The young population is relatively constant, and this can be attributed to family planning (NationMaster.com, 2012).
Table 1. Australia demographics from 2000 to 2020
(NationMaster.com, 2012)
Demographic changes in India
Unlike the demographic structure and changes in Australia, the case of India is very distinct. The population pyramid of India takes a smooth pyramid, with majority of the population being at the bottom. The population changes over the last 10 years and in the next 10 years are projected to be constant. Majority of the population are below 30 years, with the 0 to 4 years bracket recording the highest number of people. The population decreases constantly from 0 to 5 years to 80 years, whereby, very few people manage to reach 80 years. This is as contrasted to the population structure of Australia, where majority of the population are between 25 to 35 years, and a considerable percentage are below 25 years and above 50 years. The demographic changes of the two countries share great similarities in the sense that, the aging population is in a constant increase. As evident in the case of Australia at present and in the year 2020, the aging population is in a steady increase. This scenario is also demonstrated by India, whereby, the aging population is expected to double by the year 2020. The young population of below 10 years in India is also expected to reduce by a considerable percentage by 2020, which can be attributed to adoption of family planning. The improved health care and living standards has a great influence on the increasing aging population in India, which is predicted to increase significantly by the year 2020 (NationMaster.com, 2012).
Table 2. India demographics from 2000 to 2020
Significance/reason/impacts of population changes
The population changes in Australia and India over the last ten years and in the next 10 years can be attributed to a number of factors. Improved health care services and living standards are the main factors contributing to the increasing population and more specifically, the aging population. With better healthcare, child mortality is reduced, thus maintaining high life expectancy. Adoption of family planning can be identified as the main factor leading to the current and projected declines in the young population. Family planning and decreased fertility due to education, urbanization and employment among women have contributed to decreasing birth rates, thus limiting the population within the 0 and 10 years bracket. The increasing population of the aging population has a negative impact on socio economic infrastructure, since this age group is dependent on other members of the society. The decline in the young population may impact negatively on labor markets, thus affecting significant progress of the economy. Also, the constant population increase in most of the age brackets has a general impact on the economy and social infrastructure, through increased unemployment, social evils and decreased living standards due to pressure on social amenities. From another perspective, the constant population increase in Australia and India can be translated into increased human capital and ready market, thus steering up economic growth (Batini et al., 2006).
References
Batini, N et al. (2006). The Global Impact of Demographic Change. New York: Prentice Hall.
NationMaster.com. (2012). Australia Age Distribution. Retrieved from:
http://www.nationmaster.com/country/as-australia/Age_distribution
NationMaster.com. (2012). Australia Age Distribution. Retrieved from:
http://www.nationmaster.com/country/in/Age_distribution Read More
Share:
Tags
Cite this document
(“D5S: Demography and Health: AUSTRALIA AND INDIA Essay”, n.d.)
Retrieved from https://studentshare.org/miscellaneous/1597767-d5s-demography-and-health-australia-and-india

“D5S: Demography and Health: AUSTRALIA AND INDIA Essay”, n.d. https://studentshare.org/miscellaneous/1597767-d5s-demography-and-health-australia-and-india.
Comments (0)
Click to create a comment or rate a document

CHECK THESE SAMPLES OF D5S: Demography and Health: AUSTRALIA AND INDIA

...Health and demography: Introduction: The following is an analysis of health data for the US and the UK, the paper compares mortality rate, disability, fertility and morbidity levels in the US and the UK, the following is an analysis of the two countries with reference to 2000 estimates of population size, deaths, aids prevalence and births. Mortality in the UK and US: Mortality refers to the death rates in a country, in the UK it was estimated that 535.6 thousand individuals died in 2000 while in the US the value was 2,426 thousand, given that total population in the UK was estimated at 58,886 thousands and 281421.906 thousand in the US then the crude death rate is estimated at 9.095541...
2 Pages(500 words)Essay

...Assignment 2 Demography Countries with increasing older population will face many kinds of challenges. The challenges could vary from social services to economy of the countries or it could be a simple household problem. As "A Summary of the 2007 Annual Reports" by U.S. Social Security and Medicare Board of Trustee, indicates that the demand for Social Security and Medicare services is increasing with aging of the population and therefore U.S. will encounter a huge fiscal challenge in near future. The demand will increase rapidly as the baby-boom generation retires in near future. Amongst the causes, increase in life expectancy is one of the biggest causes of a dramatic increase in older population. As people live longer...
2 Pages(500 words)Essay

...The Social Demography of Health In the study of health on a global perspective, one of the most important aspects is in relation to the effects of different social issues. The main focus of the study is to be able to present the possible effects of variables such as population, poverty and pollution on the global health. The effects of social issues that are not related to health such as the presented factors can be considered important since all factors in the society are interrelated. The fact that poverty, population and pollution can affect the lives of every member of the society can mean that it can affect global health. Based...
2 Pages(500 words)Essay

...One site for United s census data is from the U.S. census bureau. The URL address is http www.census.gov/. This site is by far the most extensive site available for U.S. census data. It is the best site for finding information on the most recent census conducted in 2000. Also available are all of the census updates as recent as 2008. The site is not very attractive and it takes home hunting to find exactly how everything works. There is a section called the American FactFinder. This portion of the site gives data down to the block level for any geographic area of the US. The reliability of the data presented is excellent because the U.S. census bureau administers the site. Another good site is found at the University... site for...
2 Pages(500 words)Essay

...trends continue. The health care system in my home country of the United States will need to adapt to the changing demographics by learning how to deal with continued influxes of immigrants. The pictures painted by these surprises leads to the conclusion that places such a Russia and China could become less stable culturally and politically because of the pending demographics shifts of the next thirty years. Immigration always flows from unstable, economically disadvantaged areas to areas of stability and prosperity (Mittelstadt, 2009). It appears as though the demographic future of the United States points to stability. Under the current configuration of private insurance sponsored health care,...
2 Pages(500 words)Essay

...Demography and Health J. Bailey How many births are there per woman in India? 2.84 births per woman   The high birth rate in India can be attributed to the poverty that leads people to perceive children to be extra members of the family’s workforce. Apart from this, the lack of awareness regarding birth-control measures is also a problem in India. Patriarchal social codes also cause people to prefer girls over boys, a practice that leads to a high birth rate (Khurana, n.d.). 2. How many births are there per woman in Australia? 1.77 births per woman   Better awareness amongst people regarding the problems of a high population causes a moderate and healthy birth rate in Australia. This is also the result of an awareness regarding... the...
2 Pages(500 words)Essay

...I. Introduction I once read about a catchy article in the Daily Californian en d “Berkeley High protester claim UC Berkeley admissions discriminate against minorities”. In this article, I found the following opinion very interesting: “This campus should look like California” (Daily Californian, 2012). Thus: does it mean that UC Berkeley should follow race proportion in California when making its admission decisions or it should decide based solely on each student’s ability? In this paper, I am going to analyze the factors that can lead to one race having a bigger proportion than the others in UC Berkeley. I am going to compare average SAT scores, parent’s education, and family income level across different races in California... Introduction ...
5 Pages(1250 words)Essay
sponsored ads
Save Your Time for More Important Things
Let us write or edit the essay on your topic "D5S: Demography and Health: AUSTRALIA AND INDIA" with a personal 20% discount.
GRAB THE BEST PAPER

Let us find you another Essay on topic D5S: Demography and Health: AUSTRALIA AND INDIA for FREE!