Comments (0)
Add to wishlistDelete from wishlist
Cite this document
Summary
The growth in population is regulated by the rate at which additional people are included to the existing population or are eliminated from the…
Download full paperFile format: .doc, available for editing
HIDE THIS PAPERGRAB THE BEST PAPER93.4% of users find it useful 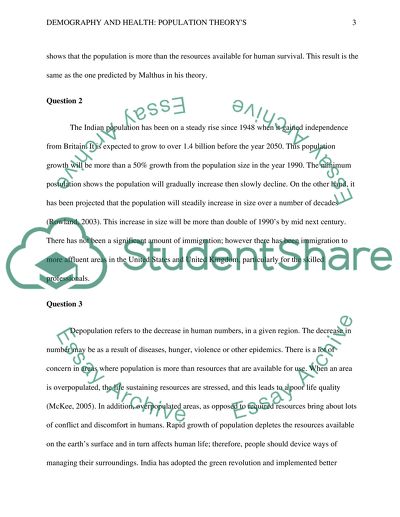 Demography and Health: Population Theorys Demography and Health: Population Theorys In demography, population growth specifically refers to how the number of human beings in a given population increases as time passes. The growth in population is regulated by the rate at which additional people are included to the existing population or are eliminated from the population. One of the greatest threats faced by the planet earth is that of being over populated by the human race. Since the earliest period of human existence, the population has been growing faster than the available resources could permit for human comfort and well being. The population is almost reaching the world’s carrying capacity. Models of population growth include the logistic model and the Malthusian Growth Model (Dyson, 2010). This paper will look at population growth in chosen countries and answer related questions.
Question 1
According to the census data for Australia, before 1788 the population was between 750,000-1,000,000. The population after 1788 to the 90’s grew to 18,310,714. The population, according to the census of 2006 is 20,848,760. In contrast to the Australian population, the population of India was 1,270,260 in the year 1700. Thereafter, it grew to 99,751,500 in the end of 90’s. According to the latest census that was conducted, the current population is 1,189,173,000. Malthus theory of population growth explains the growth. According to him, population grows at a rate that is geometric, that is, 1, 2, 4, while production of food develops mathematically, that is, 1, 2, and 3. This theory relates to population explosion witnessed in the 18th century. According to the theory; the number of individuals grows more rapidly than available food. The present picture shows that the population is more than the resources available for human survival. This result is the same as the one predicted by Malthus in his theory.
Question 2
The Indian population has been on a steady rise since 1948 when it gained independence from Britain. It is expected to grow to over 1.4 billion before the year 2050. This population growth will be more than a 50% growth from the population size in the year 1990. The minimum postulation shows the population will gradually increase then slowly decline. On the other hand, it has been projected that the population will steadily increase in size over a number of decades (Rowland, 2003). This increase in size will be more than double of 1990’s by mid next century. There has not been a significant amount of immigration; however there has been immigration to more affluent areas in the United States and United Kingdom, particularly for the skilled professionals.
Question 3
Depopulation refers to the decrease in human numbers, in a given region. The decrease in number may be as a result of diseases, hunger, violence or other epidemics. There is a lot of concern in areas where population is more than resources that are available for use. When an area is overpopulated, the life sustaining resources are stressed, and this leads to a poor life quality (McKee, 2005). In addition, overpopulated areas, as opposed to required resources bring about lots of conflict and discomfort in humans. Rapid growth of population depletes the resources available on the earth’s surface and in turn affects human life; therefore, people should device ways of managing their surroundings. India has adopted the green revolution and implemented better agricultural practices, for example, irrigation and use of environment friendly manure while Australia is self sufficient.
Question 4
The current population in Australia according to the census of 2006 is 20,848,760, while the latest in India is 1,189,173,000. According to a 2011 survey, Australia had a population growth rate of 1.4%, while India had a growth rate of 1.344%. The rule of 69 shows it will take Australia 96 years, and India 93 years to double its population.
Reference
Dyson, T. (2010). Population and development: The demographic transition. New York: Zed
Books.
McKee, J. K. (2005). Sparing nature: The conflict between human population growth and earths
biodiversity. New Jersey: Rutgers University Press.
Rowland, D. T. (2003). Demographic methods and concepts. New York: OUP Oxford. Read More
Share:
Tags
Cite this document
(“D3S: Demography and Health: Population Theory's Essay”, n.d.)
Retrieved from https://studentshare.org/miscellaneous/1597764-d3s-demography-and-health-population-theorys

CHECK THESE SAMPLES OF D3S: Demography and Health: Population Theory's

...Health and demography: Introduction: The following is an analysis of health data for the US and the UK, the paper compares mortality rate, disability, fertility and morbidity levels in the US and the UK, the following is an analysis of the two countries with reference to 2000 estimates of population size, deaths, aids prevalence and births. Mortality in the UK and US: Mortality refers to the death rates in a country, in the UK it was estimated that 535.6 thousand individuals died in 2000 while in the US the value was 2,426 thousand, given that total population in the UK was estimated at 58,886 thousands and 281421.906 thousand in the US then the crude...
2 Pages(500 words)Essay

...Assignment 2 Demography Countries with increasing older population will face many kinds of challenges. The challenges could vary from social services to economy of the countries or it could be a simple household problem. As "A Summary of the 2007 Annual Reports" by U.S. Social Security and Medicare Board of Trustee, indicates that the demand for Social Security and Medicare services is increasing with aging of the population and therefore U.S. will encounter a huge fiscal challenge in near future. The demand will increase rapidly as the baby-boom generation retires in near future. Amongst the causes, increase in life expectancy is one of the biggest causes of a dramatic increase in older...
2 Pages(500 words)Essay

...The Social Demography of Health In the study of health on a global perspective, one of the most important aspects is in relation to the effects of different social issues. The main focus of the study is to be able to present the possible effects of variables such as population, poverty and pollution on the global health. The effects of social issues that are not related to health such as the presented factors can be considered important since all factors in the society are interrelated. The fact that poverty, population and pollution can affect the lives of every member of the society can mean that it can affect...
2 Pages(500 words)Essay

...The four unexpected surprises mentioned in the Eberstadt article center on four key elements of demographic shift. The first one deals with fertility decline. Nearly 100 areas of the world now are categorized as sub replacement. This means that if the child bearing trends currently shown continue indefinitely, these places will reach a population plateau followed by a steady indefinite decrease in population (Eberstadt, 2003). The surprise in this area comes from the fact that expected areas such as Western Europe and Asian countries with strong governmental intervention in family planning, but also in areas such as Northern Africa and Turkey. Another surprise the effect Asian style government family...
2 Pages(500 words)Essay

Demography Transition Theory and Its Implications

...Demography and Health: Population Theory Common 72 of the Demography transition theory and its implications: The population growth and study on the various repercussions can be checked through the demographic transition theory. It provides the overview of the various stages that is prevailing in one or the other form in each country. Dr. Eberstadt provided insight on the global demographic population trends. In 1929, Warren Thompson, specified that there are three different stages to population growth. They were categorized into each group. Demographic Transition...
4 Pages(1000 words)Coursework

...race in California, UC Berkeley and CSU East Bay. In figure 1, I made a clustered histogram that represents the percentage of each race. Here, I gathered the data from US National Census Bureau, UC Berkeley’s official website, and CSU East Bay’s official website.According to the data, White, Black, and Others are well represented in UC Berkeley as their proportions are not significantly different compares to their proportions in California. What captures an attention from this data is that Asians are the majority group in UC Berkeley with up to 43% from the total students compared to California population where it only takes up to 13%. Also, another highlight from this histogram is that Hispanic is under represented in...
5 Pages(1250 words)Essay

The 4 pillars of SMS

...Population Health Affiliation: Section Obesity is the new menace in town with majority of the Americans being affected by it. The younger population between the ages of 5-35 years is the ones most susceptible to obesity due to their poor health choices and sedentary lifestyle. This population due to lack of other heath complications are engaging in unhealthy foods such as junk food and take outs and not having enough or any physical exercise at all leading to obesity. Childhood is spent between school, home, and doctors’ office and on other environments. If the people the children are interacting with on a daily basis which is termed the community take...
9 Pages(2250 words)Assignment

The Theory of Population

... the notion that a particular population comprises of organisms that are similar in nature and interbreed in a particular area. The theory states that population changes in three different stages including the growth stage in which population experiences an increase as a result of abundant sources for nutrition and low competition for those sources (Faculty.ucc.edu 1). The second stage is the stability stage in which population growth increases at a stable rate because of decrease in resources and increase in competition. The third stage is decline in which the population growth decreases as a result of lack of resources and ultimately the population comes to an end. Answer 2 a) The term Islam is used to refer to the submission... as well...
4 Pages(1000 words)Assignment
sponsored ads
Save Your Time for More Important Things
Let us write or edit the essay on your topic "D3S: Demography and Health: Population Theory's" with a personal 20% discount.
GRAB THE BEST PAPER

Let us find you another Essay on topic D3S: Demography and Health: Population Theory's for FREE!