Comments (0)
Add to wishlistDelete from wishlist
Cite this document
Summary
There is no evil truth. There is no good truth either. Merely, only the perception or discernment of the truth is. Truth is merely that which is true or is in accord with reality, the state of which things really exist…
Download full paperFile format: .doc, available for editing
HIDE THIS PAPERGRAB THE BEST PAPER92.9% of users find it useful 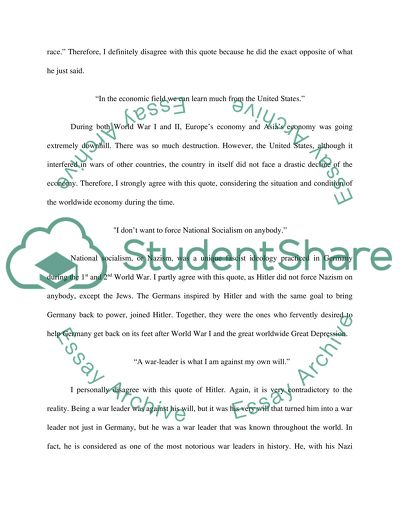 Jerry Ciacho May 10, “Truth is never evil.” In my honest opinion, I believe that truth is never evil. There is no evil truth. There is no good truth either. Merely, only the perception or discernment of the truth is. Truth is merely that which is true or is in accord with reality, the state of which things really exist. It purely means the perception of it is.
"There are plenty of Jews with blue eyes and blond hair.”
I find it surprising that many people typify all Jews to have dark eyes and hair, but in fact, being a Jew has nothing to do with genetics. In Africa, Jews are dark-skinned and have thick hair. Jews in China look like any Asian person. The same goes in any other country. The fact that some Jews at birth is not at all associated with genetics. The only other way to become a Jew is conversion so this should not be a surprise that there are Jews with blue eyes and blonde hair.
"I don’t interfere in matters of belief.”
This is surprising to me as it is very contradictory to what he actually did. He interfered with the lives of the Jews because of his belief in a perfect race. He strongly desired a “perfect race” and by attempting to do this, he has killed about seventy million Jewish people during his rule in Germany, believing that, “we [Germans] shall regain our health only by eliminating the Jews.” By “decontaminating” Germany, Hitler was one step ahead in achieving his ideal “super race.” Therefore, I definitely disagree with this quote because he did the exact opposite of what he just said.
“In the economic field we can learn much from the United States.”
During both World War I and II, Europe’s economy and Asia’s economy was going extremely downhill. There was so much destruction. However, the United States, although it interfered in wars of other countries, the country in itself did not face a drastic decline of the economy. Therefore, I strongly agree with this quote, considering the situation and condition of the worldwide economy during the time.
"I don’t want to force National Socialism on anybody.”
National socialism, or Nazism, was a unique fascist ideology practiced in Germany during the 1st and 2nd World War. I partly agree with this quote, as Hitler did not force Nazism on anybody, except the Jews. The Germans inspired by Hitler and with the same goal to bring Germany back to power, joined Hitler. Together, they were the ones who fervently desired to help Germany get back on its feet after World War I and the great worldwide Great Depression.
“A war-leader is what I am against my own will.”
I personally disagree with this quote of Hitler. Again, it is very contradictory to the reality. Being a war leader was against his will, but it was his very will that turned him into a war leader not just in Germany, but he was a war leader that was known throughout the world. In fact, he is considered as one of the most notorious war leaders in history. He, with his Nazi Germans, were greatly involved in the First World War and instigated and spurred the beginning of the Second World War.
Works Cited
Hitler, Adolf, and Hugh Trevor Roper. Hitlers Table Talk . 3rd ed. New York: Enigma Books,
2000. Print. Read More
Share:
Tags
Cite this document
(“Research hitlers Paper Example | Topics and Well Written Essays - 500 words”, n.d.)
Retrieved from https://studentshare.org/miscellaneous/1596584-research-hitlers

CHECK THESE SAMPLES OF Research hitlers

...Running head: HITLER’S SPEECH TO THE REICHSTAG Hitler’s Speech to the Reichstag on 28 April, 1939 Name: Institution: Abstract. The document under study is an extract from the text of a speech given by Adolf Hitler to the Reichstag on 28 April, 1939. It refers to German-Polish relations. Hitler uses the pretext of the Anglo-Polish Mutual Assistance Pact of March 1939 to abrogate the 1934 German-Polish Treaty of Non-Aggression. Hitler raises the issue of Danzig and the Polish Corridor and gives the details of his proposal to Poland regarding these...
4 Pages(1000 words)Essay

...: 13th March-30th November First glimpse of Rhine – Hitler considered that our film actors are just playing some parts of a hero. This artiste in unbearable. Stage agencies seek for the same old practices. They should broaden their view in order to get something new. Pleasure of a picnic – It’s a drawback that Germans are not familiar of their own country. The places of beauty have increased rapidly in the boundaries of Reich. In contrast to Australia, Germany has wonderful places for a picnic, but only few people are familiar with it. Most of the people have heard about forest of Bohemia but have rarely seen it. Reflections on church and research – Modernists have been tolerated to threats. But church...
5 Pages(1250 words)Essay

...The book Hitler’s Table Talk exists in various versions, written by different (among the most well-known of such table talks are HughTrevor-Roper, Hermann Rauschning and Henry Picker) and is a well-known source of disagreements. The text is so shocking that many historians and common readers question its authenticity. If the writings of Trevor-Roper were clearly branded by many European historians as a fake almost immediately after publication, the situation with the other two is more complicated. The other two authors, in contrast to Trevor-Roper, directly communicated with Hitler and very often were among his guests at described late dinners. Moreover, the conceptual accuracy of the statements in...
6 Pages(1500 words)Term Paper

...FINAL TERM PAPER (GERMANY)” (Your teacher’s due 1 Hitler’s table talk I have chosen a book of Hitler’s table talk 1941-1944, because it covers many historic and humanity aspects such as army of Germany, architectural and historical places, biasness in relation to religion etc. Hitler’s table talk during the period of 1941-1944, illustrates his private conversations in relation to specific topics and scenarios. All of these are discussed on the basis of four years with specific dates. These talks were recorded by various individuals and have been published in many languages. During 1941 to 1944 all table talks were translated, but most of the Hitler’s mates had a negative...
5 Pages(1250 words)Term Paper

...Hitler’s table talk Adolf Hitler is a famous individual in the history of Germans. He is famous for his dictatorship and intriguing speeches. Many authors have written about him but there are two books he authored to tell the world his story in his own way. These books include My Struggle and Hitler’s table talk. Hitler’s table talk gives a recording of his thoughts in the morning, midday, and night when he was on the table. These are his private conversations that involved different guests. He touched on different topics that he had experienced in his life and expressed his views on governments, lifestyle, and religion. Hitler praised the German army...
5 Pages(1250 words)Term Paper

... the Churches (59-61). On God, Religion and Truth Hitler never wanted that the disappearance of Christianity should result into the elimination of the concept of God – that was not desirable. He did believe in supernatural realities and he wished not to destroy that feeling in common men; however, he never wanted his political ways to acquire any religious character or a form of worship. Hitler was opposed to establish any religious practices as he said "Religion is in perpetual conflict with the spirit of free research" (83). He was also sure that eliminating religion by force would result into another form of worshiping. On the contrary, he wanted to see that young generation was taught only about truth and nothing else (61-62... ...
5 Pages(1250 words)Essay

...﻿ Adolf Hitler was the Chancellor of Germany from 1933 to 1945. He had previously tried to overthrow the German Authority in 1923 but had failed in his attempts. He managed to garner the chancellors’ seat as the leader of the Nazi Party, which then created a totalitarian single party in Germany with Hitler’s ascension to power (Vandeer-Hook 12). Hitler advocated for a radical, racially motivated world order. He signed various treaties with European countries and broke as many. His desire to amass large tracts of territory and states for himself created much tension in Europe that eventually culminated into a world war. World War II began in 1939 and lasted until 1945. It involved two...
6 Pages(1500 words)Research Paper

The Hitlers Success in Using the Principle of Fascism

...﻿The Hitler’s Success in Using the Principle of Fascism The sociopolitical milieu and the global or domestic conditions that affected the Germany after World War I led to the rise Adolf Hitler and the party known as Nazi. The historical circumstances and conditions in Germany that are considered to have preceded the rise of Nazi to power greatly impacted economic and political instability of post WWI Germany. Thomas Hobbes relates to the idea of economic conditions and political instability of post-WWI Germany to a number of issues. This paper highlights some of these issues and further analyzes the Hitler’s success in using the principle of fascism in promoting his rise to power. To...
2 Pages(500 words)Essay

Hitlers Propaganda and Principles of Fascism

...﻿Introduction Adolf Hitler acted as German’s political and military leader between 1933 and 1945. His unwavering power exceeded to the German society. He was a despotic leader who assumed the title ‘Lord’ giving him supreme authority over German. Interestingly, his supreme authority introduced ‘Hail Hitler’ not only as an official legislation but also as a binding greeting (Kershaw, 2001). Even though he portrayed actions picturing excessive punishment, the public rated him highly and deemed his behaviors as courageous. His actions were also believed to uphold and maintain morality. This reflection paper will use a propaganda poster to analyze Hitler’s success in using the principles of...
2 Pages(500 words)Essay
sponsored ads
Save Your Time for More Important Things
Let us write or edit the research paper on your topic "Research hitlers" with a personal 20% discount.
GRAB THE BEST PAPER

Let us find you another Research Paper on topic Research hitlers for FREE!