Comments (0)
Add to wishlistDelete from wishlist
Cite this document
Summary
Smoking is a significant cause of many deaths and forces governments and individuals to incur massive medical expenses in treatment of smoking induced illnesses. Many studies, surveys, and scientific researchers have pointed that…
Download full paperFile format: .doc, available for editing
HIDE THIS PAPERGRAB THE BEST PAPER97.3% of users find it useful 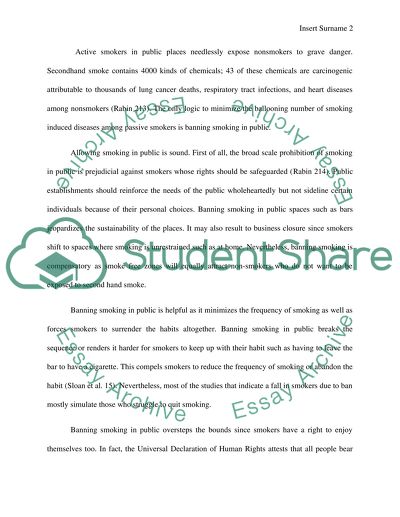 Should smoking in public places be allowed? Smoking in public spaces should be banned. Smoking is a significant cause of many deaths and forces governments and individuals to incur massive medical expenses in treatment of smoking induced illnesses. Many studies, surveys, and scientific researchers have pointed that smoking is deeply injurious to human health. According to Centre for Disease Control (2003), approximately 8.6 million Americans have serious illnesses caused or related to smoking. This is an overwhelming number of victims, especially bearing in mind that the devastating smoking related illnesses are preventable (Sloan et al. 5).
Banning smoking in public places will result to saving of many lives as well as monetary costs (Cunningham 250). Nevertheless, smokers are a significant source of tax income to governments, and prohibiting smoking in public places will undoubtedly reduce the income. Second hand smoke or environmental tobacco smoke, which lingers in the air hours after extinguishing of cigarettes or stoppage of smoking, has adverse health effects such as cancer, respiratory infections, and Asthma.
Active smokers in public places needlessly expose nonsmokers to grave danger. Secondhand smoke contains 4000 kinds of chemicals; 43 of these chemicals are carcinogenic attributable to thousands of lung cancer deaths, respiratory tract infections, and heart diseases among nonsmokers (Rabin 213). The only logic to minimize the ballooning number of smoking induced diseases among passive smokers is banning smoking in public.
Allowing smoking in public is sound. First of all, the broad scale prohibition of smoking in public is prejudicial against smokers whose rights should be safeguarded (Rabin 214). Public establishments should reinforce the needs of the public wholeheartedly but not sideline certain individuals because of their personal choices. Banning smoking in public spaces such as bars jeopardizes the sustainability of the places. It may also result to business closure since smokers shift to spaces where smoking is unrestrained such as at home. Nevertheless, banning smoking is compensatory as smoke free zones will equally attract non-smokers who do not want to be exposed to second hand smoke.
Banning smoking in public is helpful as it minimizes the frequency of smoking as well as forces smokers to surrender the habits altogether. Banning smoking in public breaks the sequence or renders it harder for smokers to keep up with their habit such as having to leave the bar to have a cigarette. This compels smokers to reduce the frequency of smoking or abandon the habit (Sloan et al. 15). Nevertheless, most of the studies that indicate a fall in smokers due to ban mostly simulate those who struggle to quit smoking.
Banning smoking in public oversteps the bounds since smokers have a right to enjoy themselves too. In fact, the Universal Declaration of Human Rights attests that all people bear equal dignity and rights (Rudy 175). Since each person is endowed with reason and conscience, smokers should not be targeted for their personal choice. However, whereas every person has rights, the exercise of rights should not sacrifice health or welfare of others.
Personally, I strongly support banning of smoking in public. Smoking in public encroaches on many people’s rights by compromising their ability to enjoy public spaces devoid of being subjected to the suffocating and harmful smoke. Although we live in a democratic society featuring respect for individual rights, smoking should be done in isolation. The universal declaration of human rights stipulates that every person has a right to standard of living sufficient for the health and wellbeing of himself or herself and family. Sharing a public space with smokers jeopardizes one’s health, which is an inherent right.
Works Cited
Cunningham, Rob. Smoke and Mirrors: The Canadian Tobacco War. Ottawa: International Development Research Centre, 1996. Print.
Rabin, Robert. Regulating Tobacco. Oxford: Oxford University Press, 2001. Print.
Rudy, Jarett. The freedom to Smoke: Tobacco Consumption and Identity. Quebec, McGill-Quenn’s University Press. Print.
Sloan, Frank, Ostermann, Jan, Picone, Gabriel, Conover, Christopher & Taylor. Donald. The price of Smoking. Cambridge: Massachusetts Institute of Technology Press, 2004. Print. Read More
Share:
Tags
Cite this document
(“Smoking in public places Essay Example | Topics and Well Written Essays - 500 words - 1”, n.d.)
Retrieved from https://studentshare.org/miscellaneous/1595807-smoking-in-public-places

CHECK THESE SAMPLES OF Smoking in public places

Ban on Smoking in Public Places

...?Commentary Essay Ban on Smoking in Public Places Introduction People face different kinds of problems in their life like financial, business, socialand health problems. They try to face these problems and to control stress and mental strain they start using drugs and smoking as a prop. However, drugs and smoking are not the solution of any problem, but are the reason of upcoming health and psychological problems. Smoking has been declared as a more severe risk to human life than other addictions. A question has been raised, as a society, what can we do to prevent tobacco from raging death on so many people? If we know these products are...
4 Pages(1000 words)Essay

Smoking in public places should be banned

...?Smoking in Public Places should be Banned Everybody of us knows hazards of smoking, may it be in public or private. Smoking has many bad effects on health because tobacco causes many diseases especially when consumed in excess. Health hazards include heart diseases, bronchitis, emphysema, and lung cancer. Smoking is no longer considered as a stress reliever and is considered hazardous not only to the smoker himself but also to those who are present around him. For the smoker, it is active smoking; while, for those around him it is called passive smoking in which people inhale the...
4 Pages(1000 words)Essay

...? November 12, Prohibiting Smoking in Public Places The legal system should regulate smoking in public places by prohibiting it, and by rigorously enforcing the ban. Murder, robbery, aggressive actions, sale of drugs that are considered to be dangerous, overt sexual acts, unauthorized use of explosives, transport of toxic materials, and many other potentially dangerous or offensive actions are strictly regulated or fully banned in public places. Cigarettes are dangerous and offensive to those people who are exposed in public places. The term, “in public,”...
7 Pages(1750 words)Research Paper

...Smoking Laws Smoking has been very common throughout the world. Many countries have already taken several steps to control the use of tobacco as it very harmful for human health. In the United States, many states have already passed certain laws that prohibit smokers to smoke at the public places. The passive smoking is the primary factor for banning the smoking in the public areas. The passive smoking starts when a person inhaled the other person's exhaled or ambient smoke from the cigarette or cigar. Various studies have already concluded that the passive...
3 Pages(750 words)Essay

Smoking in public places should be banned

...Smoking in Public Places Should be Banned Smoking in a public place results in the people in near proximity to the smoker to come in contact with the same polutants that the smoker is inhaling. The inhaling of someone else's exhausted cigarette smoke is second hand smoke, and is a health risk as well as a distasteful intrusion upon the non-smoker's rights. In addition to its unpleasant smell, smoking in public causes health risk to adults and especially children. The actions taken to make smoking in public illegal are sensible and timely....
3 Pages(750 words)Essay

The ban on smoking in public places

...This seven page paper presents a detailed examination of the ban on smoking in public places in the of New York. The takes the reader through an exploratory journey where the history and the law enactments are discussed. In addition the impact the ban has had on society both socially and financially are examined. There were five sources used to complete this paper. Introduction The dangers of smoking are not new to mankind. The first hint that smoking was a health hazard dates as far back as the 18th century according to experts but it wasn’t until the 1920’s that serious research began about the hazards of smoking to health. Even then researchers had concerns about the hazards of smoking as they pertained to second hand smoke... force...
7 Pages(1750 words)Essay

The Effects of Smoking in Public Places

... The Effects of Smoking in Public Places. The deleterious effects oftobacco smoke on smokers have long been well-documented and universally acknowledged. However, the effect of tobacco smoke, in public places, on non-smokers has been taken up for study and debate only in the last two decades. Second hand smoke, or Environmental Tobacco Smoke (ETS), is a combination of the smoke emanating from the burning tip of a cigarette, pipe or cigar and the smoke which is exhaled by the smoker. Exposure to this ‘second hand smoke’ is termed involuntary or passive smoking. Beginning with the watershed 1993 Environmental Protection Agency (EPA) Report, growing scientific evidence indicates that ETS has widespread hazardous effects (Rhode Island... ...
2 Pages(500 words)Essay

...Smoking in Public Places Smoking is a habit that has been practiced for many years. Different people have had different views concerning smoking in public places. For smokers, it is no big deal where and when they smoke since it is something that is in them. However, for non- smokers, it is a huge issue when smokers do it in public places, and they feel that their rights are being violated and endangered. The people who smoke view the practice as any other practice carried out as a way of relaxing or passing time. This implies that many smokers do it...
4 Pages(1000 words)Research Paper

Let us find you another Essay on topic Smoking in public places for FREE!