Comments (0)
Add to wishlistDelete from wishlist
Cite this document
Summary
Everything about the sale sounds ideal. However, there is one slight hitch. There are 11 of them in the family, that counts as 10 siblings and their…
Download full paperFile format: .doc, available for editing
HIDE THIS PAPERGRAB THE BEST PAPER94.1% of users find it useful 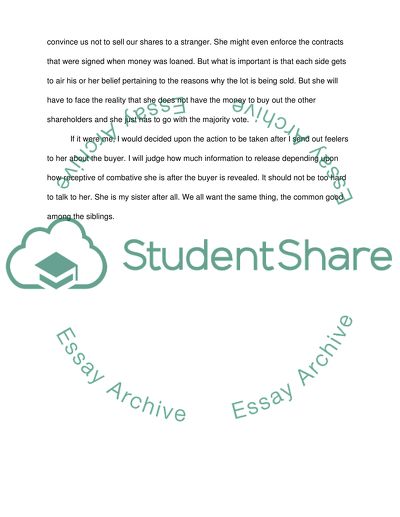 Critical Thinking Essay I have an aunt who is currently trying to sell off their family owned lot to a buyer who is giving her a very good price forit. Everything about the sale sounds ideal. However, there is one slight hitch. There are 11 of them in the family, that counts as 10 siblings and their mother. Her father is already deceased. Although almost all of them are in agreement about the sale, they are facing a slight hitch in the negotiations. The fact that at lest 5 of them already signed over their share of the property to their elder sister. My aunt in question is one of the youngest daughters in the family and she too signed over her share to her sister around 15 years ago in exchange for a financial loan that she was seeking at the time. 5 other siblings of her also did the same when they found themselves in need of money. Now that they have a buyer for the land, they are trying to sell it without telling the elder sister about it because they do not plan to pay back their debt. Rather, they will segregate her share and force her to sell to their buyer on the buyers terms.
If it were up to me, I would try to bring my elder sister into the situation by letting her know that there is a buyer and that the buyer is willing to buy our shares at X amount. I will also talk to my other siblings and ask them what kind of contract they signed with her when they got their loan so that we can find a work around and hopefully, pay back the loan. That is the only fair thing to do after she lent us the money in good faith.
Although I know that she will most likely balk at the mention of a buyer, I know that she will eventually have no choice but to accept it once the court approved segregation and assignment of the shares takes places. I realize that she will try to convince us not to sell our shares to a stranger. She might even enforce the contracts that were signed when money was loaned. But what is important is that each side gets to air his or her belief pertaining to the reasons why the lot is being sold. But she will have to face the reality that she does not have the money to buy out the other shareholders and she just has to go with the majority vote.
If it were me, I would decided upon the action to be taken after I send out feelers to her about the buyer. I will judge how much information to release depending upon how receptive of combative she is after the buyer is revealed. It should not be too hard to talk to her. She is my sister after all. We all want the same thing, the common good among the siblings. Read More
Share:
Tags
Cite this document
(“ANALYSIS/ ISSUES AND PROBLEMS Essay Example | Topics and Well Written Essays - 500 words”, n.d.)
Retrieved from https://studentshare.org/miscellaneous/1594277-analysis-issues-and-problems

CHECK THESE SAMPLES OF ANALYSIS/ ISSUES AND PROBLEMS

The article correctly states that the strengths include all resources and capabilities needed for achieving and maintaining a competitive advantage over its competitors. The MAS Company is the producer of women’s wear for big brand names that included Victoria’s Secret and GAP. The company is one of Sri Lanka’s largest manufacturers of apparel. It hires more than 33,000 people to work in more than 20 factories in ten countries. The company’s average output exceeds 43 million bras in one year. The company has grown in terms of reputation among its clients from around the world. The popularity of the big name brands is grounded on the exquisite craftsmanship of the MARS Company’s line and staff employee...
9 Pages(2250 words)Case Study

The company is leading because of its best team of employees who are not only trained but are energetic to accept the challenges related to the market and move on, taking even the most difficult of challenges into account, and not being driven away by them. The Company is doing its part by p...
8 Pages(2000 words)Case Study
sponsored ads
Save Your Time for More Important Things
Let us write or edit the essay on your topic "ANALYSIS/ ISSUES AND PROBLEMS" with a personal 20% discount.
GRAB THE BEST PAPER

Let us find you another Essay on topic ANALYSIS/ ISSUES AND PROBLEMS for FREE!