Comments (0)
Add to wishlistDelete from wishlist
Cite this document
Summary
In many of the cases of negotiations, the main problem arises when one person anchors him or herself, thus causing the other party to negotiate on that one particular area. It shows that people can bargain over positions only, and in this way can be led to focus on one aspect…
Download full paperFile format: .doc, available for editing
HIDE THIS PAPERGRAB THE BEST PAPER91.9% of users find it useful 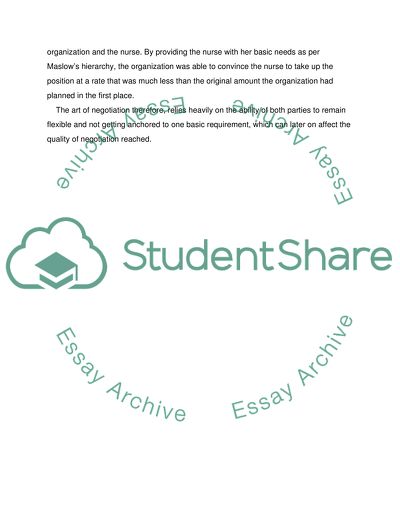 GETTING TO A YES Written by Presented to [teacher’s In partial fulfillment of the requirements of [program GETTING TO A YES
In many of the cases of negotiations, the main problem arises when one person anchors him or herself, thus causing the other party to negotiate on that one particular area. It shows that people can bargain over positions only, and in this way can be led to focus on one aspect rather than the entire whole of the situation (Downs, 2009).
For example, a nurse recently gave an interview for the post vacant for many weeks in a hospital. She knew that the hospital was in a desperate state trying to find a relevant person, and it may be able to give her the amount of pay that she wanted. To begin with, however, the nurse stated her primary concern that she would only work with $X per month. The organization was planning to pay $Y per month, however, the amount stated by $X was significantly less. In this way, by falsely anchoring her self, the nurse was now in a weak position to get only what she had asked for.
The hospital had a BATNA now. It was able to see that should it state an amount of $Z that was near to the amount X that the nurse had wanted, that organization would be able to reach an agreement at a much lower price than what it intended to pay. Here the focus now shifted more towards material interests of getting the nurse to agree for the new amount. If the nurse did not agree, the organization could simply walk away with it.
When faced with the new amount, the nurse realized that she had been made an offer that in fact was not much to her liking. At this point she got emotional, since she felt that the organization was using her. Here the organization was only pressing on a statement given by the nurse to them before. However, the nurse now realizing her mistake was now feeling emotional. The organization here realized that her needs were mostly for material needs and to satisfy the physical needs of food, hunger and material safety. At this point the nurse was not interested in achieving a sense of personal well being. Here the organization thought of providing certain material gains to her to generate her interest. It offered her free lunch and commute and highlighted how it would help reduce her costs from her pay. In this way, it tried to highlight a common ground for both the organization and the nurse. By providing the nurse with her basic needs as per Maslow’s hierarchy, the organization was able to convince the nurse to take up the position at a rate that was much less than the original amount the organization had planned in the first place.
The art of negotiation therefore, relies heavily on the ability of both parties to remain flexible and not getting anchored to one basic requirement, which can later on affect the quality of negotiation reached.
REFERENCES
Downs L J, 2009.Negotiation Skills Training. American Society for Training and Development, 2009. Read More
Share:
Tags
Cite this document
(“Negotiation Paper Assignment Example | Topics and Well Written Essays - 500 words”, n.d.)
Negotiation Paper Assignment Example | Topics and Well Written Essays - 500 words. Retrieved from https://studentshare.org/miscellaneous/1593739-negotiation-paper

CHECK THESE SAMPLES OF Negotiation Paper

Establishing a New Business Venture in a Foreign Country

Communication and Personality in Negotiation Paper

...Negotiation and Influencing Skills Please identify and describe the 5 conflict handling modes as set forth in the Thomas-Kilman Conflict Mode Instrument. In doing so, make sure to set forth under what circumstances each might be appropriately used and the potential ramifications of using them too often or too little. (25 points) In their book, Carrell and Heavrin affirm that Thomas-Kilman is a supreme individual, well known for an effective description of the five conflict handling modes. These include Avoiding, Competing, Accommodating, Compromising and Collaborating conflict resolution styles. The avoiding style is uncooperative and unassertive, which might take the form of rescheduling an issue until a better period...
3 Pages(750 words)Essay

...? Negotiation Contents Contents 2 Negotiation 3 Argument: Activity of negotiation 4 Rationale for argument 5 Definition of terms in the literature 6 Discussion with examples 7 References 8 Bibliography 9 Negotiation Negotiation is an activity that includes dialogues and conversations between two or more people involved in putting their own views with an objective to bargain and achieve the objective aimed at fulfilling the collective interests of the individual, group, etc. The activity of negotiation depends on the attitude of the participating individuals, the proactive approach and power of communication backed by critical thinking...
5 Pages(1250 words)Essay

Communication and Personality in Negotiation Paper

...A few years ago I was involved in a negotiating process for the purchase of an automobile. I decided to buy a used car to replace my auto which was giving a lot of mechanical problems. I my target budget was buying an auto in the $5000-7000 price range. I decided that going to car dealerships would increase the costs of the car, so instead I car shopping the privately own car sector. I knew this was a big decision and took advantage of all the communication channels available. I utilized the internet to learn about the market prices and the best and most reliable car models. I communicated with other car buyers in interactive forums in order to learn good practical negotiating techniques. I compared...
4 Pages(1000 words)Research Paper

The Art of Negotiation - reflection paper

...Reflection Paper The Art of Negotiation Herzing BU 336-7A Denise Greaves By: May Lor January 18, The Art of Negotiation The art of negotiation is a practice that is evident in daily life experiences. Negotiations cut across individual lives, social trends, economic decisions, and business operations. This means that many different people engage in negotiations and bargaining from time to time, if not every day. Many people are not good negotiators and that is why it is good they learn the art of negotiation, which is interesting, informative, and relevant. The subject of negotiation of...
2 Pages(500 words)Essay
sponsored ads
Save Your Time for More Important Things
Let us write or edit the assignment on your topic "Negotiation Paper" with a personal 20% discount.
GRAB THE BEST PAPER

Let us find you another Assignment on topic Negotiation Paper for FREE!