Comments (0)
Add to wishlistDelete from wishlist
Cite this document
Summary
As a person who scores 34 on my Mach score and therefore manipulate more, win more, persuaded less but persuade others more, I am certainly most comfortable as a people oriented leader. This is because of the confidence that I gain from the fact that once I focus on people and…
Download full paperFile format: .doc, available for editing
HIDE THIS PAPERGRAB THE BEST PAPER95.3% of users find it useful 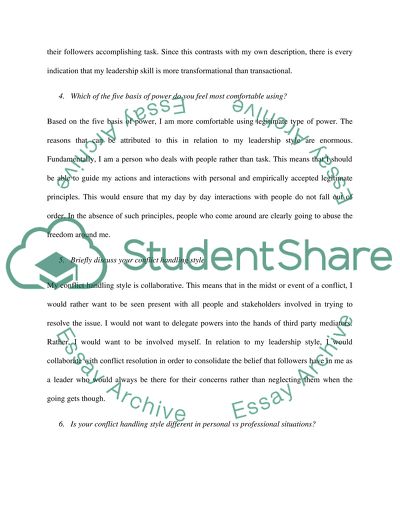 Extract of sample "See the pix"

Answers to Leadership Management Question Are you most comfortable as a task or people oriented leader? As a person who scores 34 on my Mach scoreand therefore manipulate more, win more, persuaded less but persuade others more, I am certainly most comfortable as a people oriented leader. This is because of the confidence that I gain from the fact that once I focus on people and shift my orientation towards them, I shall be able to win their hearts to back my leadership philosophies and the ideas I put up. To a very large extent therefore, I accomplish task by persuading people and so would always orient myself towards people to get things executed.
2. How important is charisma in your leadership effectiveness?
Most of my scores on charisma were scored below 15 but above 10. This is an indication that though I may exhibit charisma, I am not a highly charismatic person. To a far extent therefore, charisma is not entirely important to my leadership effectiveness. Rather, I would want to use other means such as being persuasive through actions and words to effect my leadership obligations. I would depend on charisma only when the going gets very though and it has to be used as a last resort.
3. Are your leadership skills more transformational or transactional?
As far as my preferred type of power is concerned, I scored very high points on referent than rewards, which suggests that my power system is based on people’s desire to identify with me rather than getting them to deliver tasks in exchange for reward. Babou (2008) also notes that transactional leaders are those who relate power to reward, punishment and conditions to get their followers accomplishing task. Since this contrasts with my own description, there is every indication that my leadership skill is more transformational than transactional.
4. Which of the five basis of power do you feel most comfortable using?
Based on the five basis of power, I am more comfortable using legitimate type of power. The reasons that can be attributed to this in relation to my leadership style are enormous. Fundamentally, I am a person who deals with people rather than task. This means that I should be able to guide my actions and interactions with personal and empirically accepted legitimate principles. This would ensure that my day by day interactions with people do not fall out of order. In the absence of such principles, people who come around are clearly going to abuse the freedom around me.
5. Briefly discuss your conflict handling style
My conflict handling style is collaborative. This means that in the midst or event of a conflict, I would rather want to be seen present with all people and stakeholders involved in trying to resolve the issue. I would not want to delegate powers into the hands of third party mediators. Rather, I would want to be involved myself. In relation to my leadership style, I would collaborate with conflict resolution in order to consolidate the belief that followers have in me as a leader who would always be there for their concerns rather than neglecting them when the going gets though.
6. Is your conflict handling style different in personal vs professional situations?
Comparatively, I exhibit the same conflict handling style whether in personal or professional situations. This is done to reflect a stable identity in me and also to ensure that I use my personal conflict handling style of collaboration to master my professional conflict handling style.
REFERENCE LIST
Babou. Transactional vs Transformational Leadership. 2008. Leadership Champions. Web. April 10, 2012. Read More
Share:
Tags
Cite this document
(“See the pix Essay Example | Topics and Well Written Essays - 500 words”, n.d.)
See the pix Essay Example | Topics and Well Written Essays - 500 words. Retrieved from https://studentshare.org/miscellaneous/1593509-see-the-pix

CHECK THESE SAMPLES OF See the pix

...DISCUSSION Source of each leaders base of leadership Two major leaders are identified in this case study (The Bridge on the River Kwai). These are Colonel Saito and Colonel Nicholson. Among these two leaders, there exist different sources of each of their base of power with their dependants. For instance, with Saito, there is a personal base of power, whereby he wants to extol himself as a leader on personal wellbeing grounds. Nicholson on the other hand is more formal and would want the exact procedures of military practice to be followed. He for instance would ensure that officers who are not supposed to take part in communal labor are exempted. influence tactics used with each other Among the two leaders, Saito used forceful... Source of...
2 Pages(500 words)Essay

...To see and not see Question Do you believe Amy did the right thing in pushing for surgery? (Remember: the surgery was brand new at the time she learned of it and no one anticipated the potential problems that patients would have once they recovered their sight.) The eye surgery that Virgil underwent being a new concept, and one which had not been practiced by a neurologist presented unforeseen challenges even before it was conducted. However, by Amy pushing for the surgery to be performed on Virgil despite the danger, I believe that she did a good thing (Sacks, 2012). Notably, by fronting for this surgery, the odds against the same appear to have been outweighed by the benefits to be derived from doing...
2 Pages(500 words)Essay
sponsored ads
Save Your Time for More Important Things
Let us write or edit the essay on your topic "See the pix" with a personal 20% discount.
GRAB THE BEST PAPER

Let us find you another Essay on topic See the pix for FREE!