Comments (0)
Add to wishlistDelete from wishlist
Cite this document
Summary
That is because it is the predominant language spoken in all facets of the American life. However, there is a belief that the…
Download full paperFile format: .doc, available for editing
HIDE THIS PAPERGRAB THE BEST PAPER91.9% of users find it useful 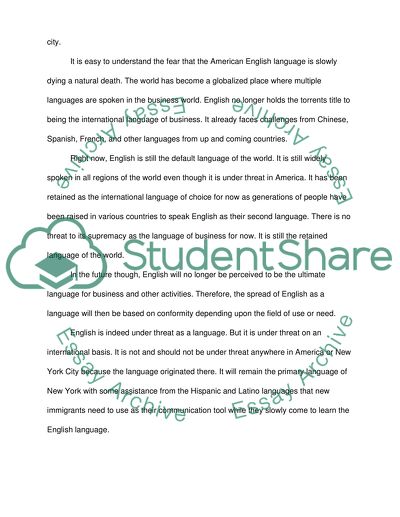 English Only Official English Movement America has long been a fully functioning nation and an envy of the world even without declaring English tobe its official language as a country. That is because it is the predominant language spoken in all facets of the American life. However, there is a belief that the existence of English as the predominant language of the country is under attack due to the increasing number of Hispanic and Latino immigrants, both legal and illegal, into the country. It is also believed that the English language is under the greatest threat in the greatest city in the world, New York, because of the proliferation of Hispanic and Latino residents who do not speak English at all in the area.
There is actually a benefit to be gained from having a bilingual city like New York. First of all, allowing for bilingualism in New York will make immigrants feel welcome and comfortable in their new surroundings. It allows for easier assimilation into the existing society and insures that the immigrants needs are properly addressed and met. However, by not allowing English to be the only communication language in the city, the English language is relegated to second class status in the country where it originated. English then becomes an optional language for its residents who may or may not decide to learn how to speak proper English since they can always speak in their vernacular anyway and still get their needs tended to. In such an event, English does truly become an endangered language.
English is the living language of New York City. As such it should be promoted amongst the city dwellers as the language of choice in order to keep the language alive. English is after all, the international language and it would be a shame for it to die a natural death as a language just because the Hispanics now count at the majority in the city.
It is easy to understand the fear that the American English language is slowly dying a natural death. The world has become a globalized place where multiple languages are spoken in the business world. English no longer holds the torrents title to being the international language of business. It already faces challenges from Chinese, Spanish, French, and other languages from up and coming countries.
Right now, English is still the default language of the world. It is still widely spoken in all regions of the world even though it is under threat in America. It has been retained as the international language of choice for now as generations of people have been raised in various countries to speak English as their second language. There is no threat to its supremacy as the language of business for now. It is still the retained language of the world.
In the future though, English will no longer be perceived to be the ultimate language for business and other activities. Therefore, the spread of English as a language will then be based on conformity depending upon the field of use or need.
English is indeed under threat as a language. But it is under threat on an international basis. It is not and should not be under threat anywhere in America or New York City because the language originated there. It will remain the primary language of New York with some assistance from the Hispanic and Latino languages that new immigrants need to use as their communication tool while they slowly come to learn the English language.
Works Cited
Zentella, Ana Celia. “The Hispanophobia of the Official English Movement in the US”. EBSCO. 2003: 71-84. EBSCO Publishing. Web. 28 Mar. 2012. Read More
Share:
Tags
Cite this document
(“ENGLISH-ONLY/OFFICIAL ENGLISH MOVEMENT Admission/Application Essay”, n.d.)
ENGLISH-ONLY/OFFICIAL ENGLISH MOVEMENT Admission/Application Essay. Retrieved from https://studentshare.org/miscellaneous/1592522-english-onlyofficial-english-movement

...neutralization, many of the legal citizens have minimal or no knowledge at all. Official English supports claim that America needs English-only rule, English does not need bodyguard to be the fastest expanding language in the world (Geneva, 2009). Opponents have also labeled the move as xenophobic and racist. According to Chen, official English supporters play on the fears that many non-Hispanic white U.S has the borrowing of America (Torres, 1997). Hispanic organizations have also protested that discrimination against them and other non-English speakers has been on the rise due to the...
5 Pages(1250 words)Research Paper

...? Plain English Movement Dear Ms. Allen, I thank you for writing to me and enquiring about plain English. I can understand your curiosity to know about the new movement that is going on for quite some time on the issue of using plain English in our formal and informal communication needs. Plain English is a way to express our thoughts in clear, concise and easy language in minimum words. It is a common myth that long fluffy sentences can better and accurately express our thoughts. Perhaps, habitually, we all think and feel like that; however, it is mostly not true. Some of the features that differentiate plain language document from...
4 Pages(1000 words)Term Paper

Cause and Effect: The Causes and Effects of Divorce

Jazz is a Unique Style

...English-Only Debated Several argumentative have been advanced towards Cultural resistance as a practice whereby meaningsand symbols, that is, culture, are used to contest and combat a dominant power, and specifically constructing a different vision of the world and America in particular in the process. It can also be defined as an easily accessible artistic mode of expression that points out, in a wide range of mediums, criticisms and oppositions to social, political ,economic or other circumstances in the community that are of high concern (Duncombe, 4-5). Consequently, cultural resistance mainly intends to raise awareness of the issue and then calls for justice on the part of the oppressed, this...
5 Pages(1250 words)Essay

...English Only Debate Paper According to Crawford (1997, pg Among special-interest lobbies, the English Only movement stands out. It's easy to understand the origins of the Tobacco Institute or the Peanut Advisory Council or the Valve Manufacturers Association. But how does a language acquire a multimillion-dollar advocacy group Cui bono" The purpose of this assignment is to compare and contrast both sides of the controversial issue and explain the writer's opinion on the English Only debate. Discussion According to Senator Dole in (National Education Association, 2001, pg. 1), "With all the divisive forces tearing at our...
3 Pages(750 words)Assignment

...CONSEQUENCES OF ENGLISH ONLY MOVEMENT ON EDUCATION IN NEW YORK INTRODUCTION English-only movement, also called Official English movement by its supporters, refers to a political movement for the use only of English language in public occasions through the establishing of English as the only official language in the United States. There have been various unrelated incarnations of the movement throughout American history. In 1986, Larry Pratt founded...
10 Pages(2500 words)Essay

English as Only US Official Language

...weaken American identity and sow the seeds of disunity and conflict." The possible weakening of the American identity and the potential of bilingualism to breed disunity is the battle slogan of such organizations as the English Only movement, Official English and the US English Inc., the latter a political lobby group founded by the late Senator from Alaska Samuel Hayakawa and Dr. John Tanton in 1983. These groups feel that English is losing out to Spanish and call for federal legislation to declare English as the official language, specifying that no other state law or policy shall be...
8 Pages(2000 words)Essay

Multilingualism or English Only

... Multilingualism or English Only Introduction As the United s has always been the country of immigrants, presently different languages are spread in the country. Certainly, English language is the leading on, but at the same time Spanish, Chinese, French and Hawaiian are widespread on the territory. It appears that the United States of America, the most developed country in the world, does not have an official language. Not all the states established English as official due to the growing popularity of other languages. The given paper will prove that despite of the popularity of multiculturalism and language diversity, the country should have one official language to save the culture and defend English. Language diversity... Chinese one day...
4 Pages(1000 words)Essay
sponsored ads
Save Your Time for More Important Things
Let us write or edit the admission/application essay on your topic "ENGLISH-ONLY/OFFICIAL ENGLISH MOVEMENT" with a personal 20% discount.
GRAB THE BEST PAPER

Let us find you another Admission/Application Essay on topic ENGLISH-ONLY/OFFICIAL ENGLISH MOVEMENT for FREE!