Comments (0)
Add to wishlistDelete from wishlist
Cite this document
Summary
The short version of the first question for this assignment appeared to me like “do you agree with the Sapir-Whorf Hypothesis”? Agreeing or disagreeing…
Download full paperFile format: .doc, available for editing
HIDE THIS PAPERGRAB THE BEST PAPER92.3% of users find it useful 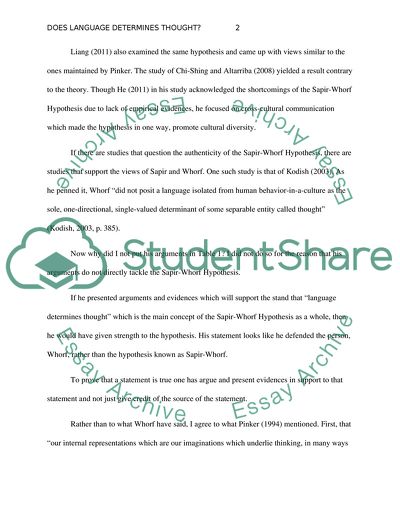 Does language determines thought? I never thought that I will enjoy making this paper – from researching about to the topic to writing about the subject. The short version of the first question for this assignment appeared to me like “do you agree with the Sapir-Whorf Hypothesis”? Agreeing or disagreeing with a theory in an academic perspective and manner seems a little bit daunting, but I never knew that it could be fun too. To answer the first question, I would like to present first the answer to the second; on what the current literature says about the hypothesis.
Controversial! This word still aptly describes the hypothesis up to these days attracting continued studies about the relationship between language, thought and culture. Its strong version called Linguistic Determinism, posits that “people’s thoughts are determined by categories made available by their language” (Pinker, 1994, p. 57), that “language may determine our thinking patterns” (Liang, 2011, pp. 569-570), or that “one cannot think outside the confines of their language” (He, 2011, p. 562). Linguistic Relativity which is its weaker version, maintains that “differences among languages cause differences in thoughts of their speakers” (Pinker, 1994, p.57).
Among the articles that I have read, I summarized the strengths and weakness of the Sapir-Whorf Hypothesis in Table 1. Pinker (1994) thoroughly debunked the hypothesis in his book The Language Instinct. From the circumstances that contributed to Whorf’s formation of the hypothesis – to the two aspects of the theory, the strong and weak versions, Pinker (1994) questioned them all using anthropological and logical reasoning and results of empirical studies. As Pinker (1994, p. 67) have said, “Linguistic determinism is just a conventional absurdity”.
Liang (2011) also examined the same hypothesis and came up with views similar to the ones maintained by Pinker. The study of Chi-Shing and Altarriba (2008) yielded a result contrary to the theory. Though He (2011) in his study acknowledged the shortcomings of the Sapir-Whorf Hypothesis due to lack of empirical evidences, he focused on cross-cultural communication which made the hypothesis in one way, promote cultural diversity.
If there are studies that question the authenticity of the Sapir-Whorf Hypothesis, there are studies that support the views of Sapir and Whorf. One such study is that of Kodish (2003). As he penned it, Whorf “did not posit a language isolated from human behavior-in-a-culture as the sole, one-directional, single-valued determinant of some separable entity called thought” (Kodish, 2003, p. 385).
Now why did I not put his arguments in Table 1? I did not do so for the reason that his arguments do not directly tackle the Sapir-Whorf Hypothesis.
If he presented arguments and evidences which will support the stand that “language determines thought” which is the main concept of the Sapir-Whorf Hypothesis as a whole, then he would have given strength to the hypothesis. His statement looks like he defended the person, Whorf, rather than the hypothesis known as Sapir-Whorf.
To prove that a statement is true one has argue and present evidences in support to that statement and not just give credit of the source of the statement.
Rather than to what Whorf have said, I agree to what Pinker (1994) mentioned. First, that “our internal representations which are our imaginations which underlie thinking, in many ways cross purposes with the sentences in a language” (p. 81). And ultimately I agree that “mental life goes on independently of particular languages” (p. 82).
References
Chi-Shing, T & Altarriba, J. (2008). Evidence Against Linguistic Relativity In Chinese And English: A Case Study Of Spatial And Temporal Metaphors. Journal Of Cognition & Culture 8.3(4), 335-357. Retrieved from Academic Search Complete.
He, J. (2011). The Validity Of Sapir-Whorf Hypothesis--Rethinking The Relationship Among Language, Thought And Culture. US-China Foreign Language 9(9), 560-568. Retrieved from Academic Search Complete.
Kodish, B. (2003). "What We Do With Language -- What It Does With Us. ETC: A Review Of General Semantics 60(4), 383-395. Retrieved from Academic Search Complete.
Liang, H. (2011). The Sapir-Whorf Hypothesis And Foreign Language Teaching And Learning. US-China Foreign Language 9(9), 569-574. Retrieved from Academic Search Complete.
Pinker, S. (1994). The Language Instinct. New York: William Morrow and Company Inc. Read More
Share:
Tags
Cite this document
(“Languages Reflect Societies Essay Example | Topics and Well Written Essays - 500 words”, n.d.)
Languages Reflect Societies Essay Example | Topics and Well Written Essays - 500 words. Retrieved from https://studentshare.org/miscellaneous/1592515-languages-reflect-societies

...CW assessment for mark up languages for the web Word Count: 1500 {Introduction to Conclusion} Contents of the Report: Introduction. Markup Languages. Evolution of XML. Case studies. Conclusion. References. Introduction As the technology was pacing up there was a necessity for all the information present online to appear consistent and easily understandable. Internet was a powerful weapon to provide the required information to a user that was relevant and easy to access within a split second. This had to be carried out by implemented various styles (Natanya Pitts-Moultis and Cheryl Kirk, 1998). The problem faced was that various clients would adapt different styles of their choice which might result in...
6 Pages(1500 words)Essay

...Comparison between Egyptian/Muslim society and Chinese/Confucian society. The timeless tale of a woman, in any society is a reflection of the wholerange of experiences which she has undergone, and it does not differ greatly whether it is 20th century Egyptian women of Muslim culture or the 17th century Chinese women of Confucian culture. The pain and the anguish to which they are exposed is the same. The differentiation lies more in the feminist and male dominant society rather than the geographical region. The relationship between the man and the woman surpasses all geographical boundaries, cultural barriers and religious beliefs, as their suffering is...
6 Pages(1500 words)Essay

...Reflect Thought Give an example of something that one culture might regard as a virtue that another culture might not. Explain why this could leadto relativism. There are many things that are considered a virtue in one culture that are regarded as a fault in another culture. One specific example of this can be identified in terms of relative levels of strength and intelligence. While in developed regions such as France or Western Europe there is a considerable value placed on intellectual ability. This may be due to the nature of high technology and skilled position jobs in these regions that require individuals of intellectual ability and tendency. This can be contrasted with virtues of strength in developing regions,...
2 Pages(500 words)Assignment

...Imperative Languages vs. Functional Languages Basic constructs The fundamental construct in imperative languages, like Ada, C, C++, Fortran, Java, Modula, Pascal, Python, and Ruby, is the assignment statement. A program written in any of these languages contains variables which are declared and assigned with values, and changes in the values of these variables during a program’s execution update the “state” of a program (Lee 118). Functional languages, like Haskell, Lisp, ML, and Miranda, are based on the declarative construct and mathematical concepts of a function. Programs written in functional languages do not contain assignment...
3 Pages(750 words)Essay

...Keeping Languages Alive The society holds several heritages important to them, one of them being use of language. It is the most powerful equipment of preserving and developing our perceptible and imperceptible legacy. Several languages are on the verge of disappearing from existence. This is because the language spoken by the majority has marginalized minority languages. This article looks at the importance of the society to save their language, which are in danger of disappearing. It also looks at the importance of the government creating laws that that encourage the protection of endangered...
2 Pages(500 words)Essay

...The Implications of Wearing theTraditional Dress Fashion in the modern world today de s a person’s style, personality and status in life. It can be an expression of creativity when people integrate into their wardrobe some special item that reflects something about them. However, in Arab society, one’s dress is indicative of more things, usually coming Arabian perspectives and interpretation of the Qur an, or scared book that tells them how they should live in the way Allah would have wanted. Since Islam is very conservative, worldly values and practices are prohibited in their society. The Al-Ziyy Al-Islami or Islamic dress is something that distinguishes them from others because such dress should reflect the cornerstones... it to...
2 Pages(500 words)Essay

Let us find you another Essay on topic Languages Reflect Societies for FREE!