Op-ED on the article: Move Over, OPECHere We Come - Essay Example

Comments (0)
Add to wishlistDelete from wishlist
Cite this document
Summary
The author Ed Morse having had experience in both the government (former State Department Official) and the corporate world (presently holding high office in…
Download full paperFile format: .doc, available for editing
HIDE THIS PAPERGRAB THE BEST PAPER94.9% of users find it useful 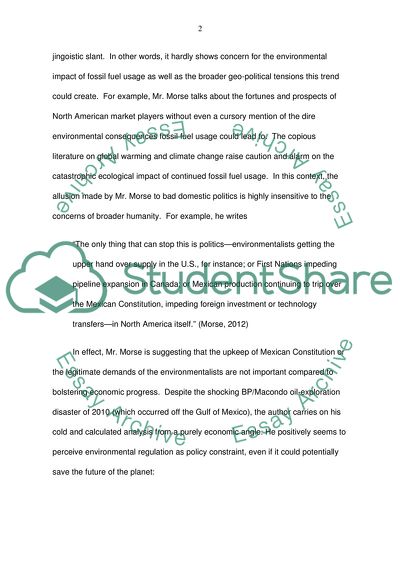 Extract of sample "Op-ED on the article: Move Over, OPECHere We Come"

Op-Ed response to ‘Move Over OPEC – Here We Come’ by Ed Morse: The Op-Ed article d Move Over, OPEC—Here We Come is compactly written with suitable supporting evidence. The author Ed Morse having had experience in both the government (former State Department Official) and the corporate world (presently holding high office in Citigroup) has the requisite credentials for foraying into the topic in question. And his command of statistics and analytic breadth further show his mastery of the subject. Mr. Morse offers several insights into the current state of the global oil and natural gas industry. He makes salient observations about the rising prowess of North America in the energy market, as the U.S., Canada and Mexico have ushered in a phase of increased extraction of energy resources. Key energy resources discussed by Mr. Morse are crude oil and natural gas, where new discoveries in off-shore and wilderness areas of the North American landscape throw open new opportunities for self-sufficiency for the highly energy dependent economies of this region. For example, the author notes
“The economic consequences of this supply-and-demand revolution are potentially extraordinary. We estimate that the cumulative impact of new production and reduced consumption could increase real U.S. gross domestic product (GDP) by 2%-3.3%, or by $370 billion-$624 billion, by 2020.” (Morse, 2012)
Hence there is no doubt that the article is well researched and factually accurate. But where criticism could be made is with regards to its narrow and jingoistic slant. In other words, it hardly shows concern for the environmental impact of fossil fuel usage as well as the broader geo-political tensions this trend could create. For example, Mr. Morse talks about the fortunes and prospects of North American market players without even a cursory mention of the dire environmental consequences fossil fuel usage could lead to. The copious literature on global warming and climate change raise caution and alarm on the catastrophic ecological impact of continued fossil fuel usage. In this context, the allusion made by Mr. Morse to bad domestic politics is highly insensitive to the concerns of broader humanity. For example, he writes
“The only thing that can stop this is politics—environmentalists getting the upper hand over supply in the U.S., for instance; or First Nations impeding pipeline expansion in Canada; or Mexican production continuing to trip over the Mexican Constitution, impeding foreign investment or technology transfers—in North America itself.” (Morse, 2012)
In effect, Mr. Morse is suggesting that the upkeep of Mexican Constitution or the legitimate demands of the environmentalists are not important compared to bolstering economic progress. Despite the shocking BP/Macondo oil-exploration disaster of 2010 (which occurred off the Gulf of Mexico), the author carries on his cold and calculated analysis from a purely economic angle. He positively seems to perceive environmental regulation as policy constraint, even if it could potentially save the future of the planet:
“Policies could obstruct the pace of supply growth. We already have the experience of the BP/Macondo disaster in the Gulf of Mexico in April 2010, which led to a moratorium on drilling in U.S. federal waters, and a revamping of the U.S. regulatory regime governing leasing, revenue collection and safety. As a consequence, U.S. deepwater production has fallen by more than 300,000 barrels per day since then.” (Morse, 2012)
What is also conspicuous by its absence is any direct reference to Russia. Just as Alaskan and off-shore oil reserves have been a boon for the North American market, the great sprawling landscapes of Siberia have put Russia into a prominent position. While Mr. Morse talks about the equation between the United States and the Middle East, he doesn’t adequately factor in the prominence of Russia in global energy markets.
*Hence, in conclusion, while the article by Ed Morse has its share of merits, it also carries deficiencies as illustrated above.
Reference:
Ed Morse, Move Over OPEC – Here We Come, retrieved from Wall Street Journal Online edition, retrieved from on 28th March, 2012 Read More
Share:
Tags
Cite this document
(“Op-ED on the article: Move Over, OPECHere We Come Essay”, n.d.)
Op-ED on the article: Move Over, OPECHere We Come Essay. Retrieved from https://studentshare.org/miscellaneous/1592277-op-ed-on-the-article-move-over-opechere-we-come

“Op-ED on the Article: Move Over, OPECHere We Come Essay”, n.d. https://studentshare.org/miscellaneous/1592277-op-ed-on-the-article-move-over-opechere-we-come.
Comments (0)
Click to create a comment or rate a document

CHECK THESE SAMPLES OF Op-ED on the article: Move Over, OPECHere We Come

...8th May OP-ED Article Should USA Intervene in Syria? The mess in Syria is becoming murkier day by day. It is now evident that neither President Assad nor the rebels have the military power to secure a convincing victory. With this in mind, the calls for a direct intervention by USA are becoming more pronounced. UK and France have directly asked for a NATO intervention. Various reasons are being given to facilitate this intervention such as duty of USA to protect human rights of Syrians, benefits to USA from a decrease in the influence of Iran in the region,the threat of chemical weapons use by President Assad , to stop the conflict from engulfing the entire region and the most important...
3 Pages(750 words)Essay

...its operation and retrenched 1,800 workers due to the slowdown in demand (philstar.com). As a result, the unemployment rate of the Philippines ballooned as the Philippine Labor Department reported that 40,000 workers were retrenched, 33,000 workers are experiencing shorter working hours while over 5,400 overseas Filipino workers were displaced because of the crisis. This case shows that the Philippines depend heavily on exports and overseas Filipino labor for its earnings. In fact, it is the remittance of Overseas Filipino Workers ( $16.4 billion dollars in 2008) that cushioned the economy from the impact of the world crisis, leading to an increase in GDP despite the bleak environment. Labor Export as...
4 Pages(1000 words)Essay

...No to Mercy” by John Doe Just as many other college who sadly were not born with a silver spoon, you may have already accumulated massive student loan debt. That is no surprise at all as education nowadays proves to be just a privilege and not a right, as opposed to what progressives believe. Let us face it, college is pricey, and without student loans many would just be drooling over the feel of the classroom and that dreamed college diploma. However, over the past few years, there have been loads of doubts over the effectiveness of borrowing so much money – even a debt accrued for education. Media reports confirm that the student loan debt has ballooned into a gigantic $870 million –...
2 Pages(500 words)Essay

...privacy and civil liberties through invading private homes and tapping private telephones. Moreover, prohibition also encourages the youth to live a life of crime, which leads to a rise in murder, injury, intimidation, assault, and theft. Additionally, it also leads to inter-state crime and fuels multinational criminal gangs. Finally, prohibition also leads to lost local and state revenues, especially for the State of Washington that the article states could be worth over $300 million annually (Riley 1). However, I disagree with this op-ed article as it is my opinion that marijuana should not be legalized. While the article does raise...
8 Pages(2000 words)Essay

...The negative effect of the proposed bill to Public health In Turkewitz‘s article identifies various efforts by the public in seeking rights to choose whether to use experimental drugs. The argument in this debate has been whether to legalize their usage if the patient seeks to do so. Each public health issues are guided by ethics thus any public health argument should keep in mind the medical code of ethics. The patients’ rights are limited to other factors including the implication of their action to the medical fraternity. There is need to focus on the wellbeing of the public while at the same time seeking models that will ensure rules are followed. Legislations aim at safeguard the functionality of a given...
2 Pages(500 words)Article

...of initiative to involve the mobility option in their own career planning. Why is that? In order to engage in a stay abroad mentality, the employee must have certain characteristics to be a certain type. He must show, motivated, confident and optimistic approach to the new tasks initiative. The ability for reflection and abstraction let him also before long phases abroad conditional planning not shrink. So why so little initiative? My Op-Ed commits to be an eye opener to state governments, corporate managements, career developers, employees and employers, on what must be done to globalize and popularize labor mobility. The arguments have been developed in point forms, for clarity and objectivity. •...
4 Pages(1000 words)Essay

.... That is systematic and personal. The particular hindrance involves physical location and the mental ability. The systematic complications refer to political contrivances, given laws, educational chances and barriers that come from historical instances. (Miguélez & Moreno, 2013 .The awareness and development of a high class of labour mobility and migration gives an opportunity to a more efficient and effective distribution of resources. Labour migration and movement have confirmed to be a must driver of innovations. Conflict, misunderstanding, globalization, demographic differences and shifts, inequality in income, and change in income may arise. Moreover, this may lead to more families and job seekers to...
2 Pages(500 words)Essay
sponsored ads
Save Your Time for More Important Things
Let us write or edit the essay on your topic "Op-ED on the article: Move Over, OPECHere We Come" with a personal 20% discount.
GRAB THE BEST PAPER

Let us find you another Essay on topic Op-ED on the article: Move Over, OPECHere We Come for FREE!