Comments (0)
Add to wishlistDelete from wishlist
Cite this document
Summary
This research is being carried out to evaluate renewable versus nonrenewable sources of energy. It is a known fact that every nation on the face of the Earth wants to progress financially and economically…
Download full paperFile format: .doc, available for editing
HIDE THIS PAPERGRAB THE BEST PAPER96.8% of users find it useful 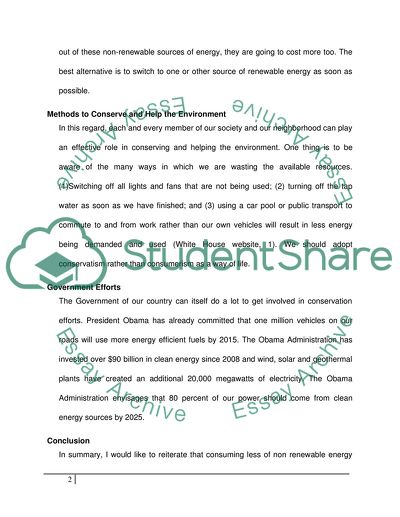 Extract of sample "Renewable versus Non Renewable Sources of Energy"

﻿Option 2: Energy Resource Plan Paper
Introduction
It is a known fact that every nation on the face of the Earth wants to progress financially and economically. We want a life of comfort and ease for our citizens and as little a percentage of our population under the poverty line as possible. Economic development of nations has only been possible when one converts from an agrarian to an industrial nation. But doing so also requires making more and more use of the Earth’s resources. In fact, we are stripping the Earth of its natural resources at three times the rate of its replenishment. The consequences are disastrous and it is estimated that we shall run out of the available supply in the next 50 years or so. That is why it is necessary to both conserve our present resources of fuel and other natural resources as well as make as small a carbon footprint as possible. This is the only way that we can ensure that the present resources last for our next generation and beyond.
Renewable versus Non Renewable Sources of Energy
Energy can be classified into two types- renewable and non renewable. Renewable energy includes the natural resources that are in abundant supply like the sun, the oceans and the wind from which we can get solar, water and wind power. Non renewable sources of energy are those like the fossil fuels the world is consuming at a hectic pace. These non renewable sources also power most of the world’s machinery and power plants, especially in developing nations that do not have the means to use better and cleaner fuels and technology. It is no wonder that as we run out of these non-renewable sources of energy, they are going to cost more too. The best alternative is to switch to one or other source of renewable energy as soon as possible.
Methods to Conserve and Help the Environment
In this regard, each and every member of our society and our neighborhood can play an effective role in conserving and helping the environment. One thing is to be aware of the many ways in which we are wasting the available resources. (1)Switching off all lights and fans that are not being used; (2) turning off the tap water as soon as we have finished; and (3) using a car pool or public transport to commute to and from work rather than our own vehicles will result in less energy being demanded and used (White House website, 1). We should adopt conservatism rather than consumerism as a way of life.
Government Efforts
The Government of our country can itself do a lot to get involved in conservation efforts. President Obama has already committed that one million vehicles on our roads will use more energy efficient fuels by 2015. The Obama Administration has invested over $90 billion in clean energy since 2008 and wind, solar and geothermal plants have created an additional 20,000 megawatts of electricity. The Obama Administration envisages that 80 percent of our power should come from clean energy sources by 2025.
Conclusion
In summary, I would like to reiterate that consuming less of non renewable energy resources and switching to renewable sources is the need of the hour. Our slogan should be: ‘Move towards clean and renewable energy sources today for a better, cleaner and brighter future’. We owe it to ourselves and our future generations.
Works Cited
The White House Website. Securing American Energy. Online. Accessed on 24 March 2012 at http://www.whitehouse.gov/energy/securing-american-energy#energy-menu Read More
Share:
Tags
Cite this document
(“Renewable versus Non Renewable Sources of Energy Coursework - 2”, n.d.)
Renewable versus Non Renewable Sources of Energy Coursework - 2. Retrieved from https://studentshare.org/miscellaneous/1592251-see-attachment

“Renewable Versus Non Renewable Sources of Energy Coursework - 2”, n.d. https://studentshare.org/miscellaneous/1592251-see-attachment.
Comments (0)
Click to create a comment or rate a document

CHECK THESE SAMPLES OF Renewable versus Non Renewable Sources of Energy

...? Renewable Energy al affiliation: Introduction Renewable energy refers to the energy coming from natural sources. These sources include: rain, sunlight, wind, tides and geothermal heat. Renewable energy applications are mostly done in large scale. However it is also used in the rural areas. Renewable energy gives an encouraging range of technologies which can be used today and even in the future. According to Sorensen (2010), the most important advantage of renewable energies is reduced rate of carbon emission to the...
4 Pages(1000 words)Research Paper

...? Renewable Energy Development and Progression in China, India, Nigeria Introduction It is worth noting that stability of any country’s economy cannot be realized unless measures towards realizing energy balance are achieved. In this context, energy is the indirectly observed quantity that often comes in many forms including potential, radiant, kinetic and other forms of energy. Arguably, energy is an indispensable prerequisite for causing change or performing work. Renewable and none-renewable forms of energy are the two known forms of energy that have been in use for...
5 Pages(1250 words)Research Paper

...for their domestic use acquire special meaning and should be thoroughly considered. 'UK was revealed to be a nation of 'standby junkies', with 71 percent rarely if ever switching off televisions, DVD players, computers and other electrical appliances'. (Hickman, 2006) As it is assumed that changing the harmful habits of whole British population is impossible, it is useful to have a look at the renewable energy opportunities, which the country has at its disposal. Different kinds of renewable energy sources Of course, the benefits of using the renewable energy sources are huge, among which are lower...
4 Pages(1000 words)Essay

...RENEWABLE ENERGY PART ASSUMPTIONS A self-built solar water heater, was made by one of our recent and tested outdoors, with beam radiation nearly normal to the plane of the collector. The test results obtained are contained in the Excel spreadsheet (ENE800J1 Wk 1 c/w.xls). The following details will be necessary to complete this coursework. -A constant mass flow rate of 0.00755 kg/sec was used throughout the test. -The collector aperture area was 0.47m2. - An average value of Cp between the maximum and minimum fluid Temperatures may be used throughout, (4.1784 kJ/kg K) - linear regression analysis should be used to find the best-fit line... . It's not...
12 Pages(3000 words)Essay

...Modern Marvels- Renewable Energy With rising concerns of greenhouse gas emissions and continually increasing costs of fuels like coal, petrol etc, renewable energy sources have taken a significant place in the market. Solar Energy: Solar energy is quite an expensive proposition to fulfill the energy needs of a country. Photovoltaic panels are quite expensive because of the need of ultra pure silica making solar powered grids two to five times expensive than typical grids. However, research has been going to replace silica with a mixture of other cheaper elements thereby providing us with a low cost...
3 Pages(750 words)Essay

...Renewable Energy Sources Of Renewable Energy Sources Oil-producing countries in 1973 decided to hike the crude oil prices from two dollars to ten dollars per barrel. This resulted to economic and sensation chaos in both developed and non-developed countries who did not posses oil reserves. This led to the realization that, it was no longer acceptable to use oil extravagantly or indiscriminately. Eventually, efforts were directed towards energy conservation programs and alternative energy resources development. That’s how renewable energy came into...
6 Pages(1500 words)Essay

...Fossil Fuels versus Renewable Energy Dead and decaying plants and animals form fossil fuels. Fossil fuels are formed when these material decay for a long period. Although, there is an abundance of coal, oil, and natural gas now, it will run out someday. Because the process of forming fossil fuels take long, it will be difficult for fossil fuels to sustain the world demand. Once the resources are used, we cannot get them back. One of the benefits of using fossil fuels is that it is economical to use. Fossil fuels are used in everything. They are used in our households, and to make products such as plastics (Department of Energy, June 2001). There are also alternatives to...
1 Pages(250 words)Essay

...Discussion—Fossil Fuels versus Renewable Energy Discuss the scientific and technical concepts related to the uses of fossil fuels and renewable energy resources The use of both fossil and renewable energy fuels serve a significant role in the development as well as running of varied mechanisms in any given state but in certain forms like electricity. However, the final acceptable for of energy usually encompasses use of varied mechanisms that are extremely complex, for instance, like that of electricity. In order to obtain electricity from both fossil and renewable...
1 Pages(250 words)Admission/Application Essay

...in the greenhouse gas emissions (National Renewable Energy Laboratory, 2009b). Burning of fossil fuels could result to a serious global climate change (Green Peace, 2009). In relation to the continuously increasing population and energy demand in the United States, the problem with relying too much on the use of fossil fuel is the question behind the long-term reserves of fossil fuels (Science Daily, 2007). Likewise, fossil fuels are non-renewable energy sources (National Renewable Energy Laboratory, 2009). Once the sources of fossil fuel become scarce, the market price...
4 Pages(1000 words)Research Paper
sponsored ads
Save Your Time for More Important Things
Let us write or edit the coursework on your topic "Renewable versus Non Renewable Sources of Energy" with a personal 20% discount.
GRAB THE BEST PAPER

Let us find you another Coursework on topic Renewable versus Non Renewable Sources of Energy for FREE!