Response of chapter 1 of inside rikers - Essay Example

Comments (0)
Add to wishlistDelete from wishlist
Cite this document
Summary
She has written many books some of which have become bestsellers. Inside Rikers is one of her books that have made great sales in society. The book is very touching due to the issues that it discusses. The…
Download full paperFile format: .doc, available for editing
HIDE THIS PAPERGRAB THE BEST PAPER91.1% of users find it useful 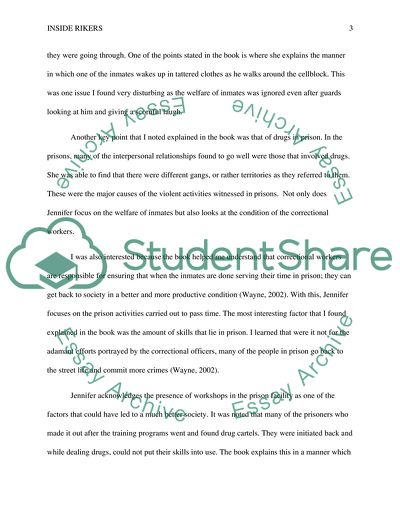 Extract of sample "Response of chapter 1 of inside rikers"

Inside Rikers Inside Rikers Jennifer Wynn is one of the renowned in the United s. She has written many books some of which have become bestsellers. Inside Rikers is one of her books that have made great sales in society. The book is very touching due to the issues that it discusses. The issues touch on the life experienced by prisoners and, thus, makes the people on the outside try to understand the situation inside the prisons.
The book describes Jennifer visiting a prison three different times and each time with a different personality. Focusing on the first chapter of the book, Jennifer enters the prison as a journalist. In this context, Jennifer tries to understand the issues and the prison conditions. The rest of the book involves her visiting the prison as a rehabilitation teacher and eventually as the director of the program that she had established in the prison. Her major goal in going to the prison was to get some sort of understanding of the social context in there. After acquiring this, the book explains that she intended to take up the matter with the respective authorities in a bid to get prison reforms (Wayne, 2002). This was inspiring to me as I have always been a person who supports justice and equality despite the different social statures around.
The chapter states that in the prison, she talked to some of the inmates, after which she was able to go and visit their homes and talk to their families. The stories provided by their families are very touching and leave one contemplating the feeling of having one of their family members in prison. Jennifer talks about the food that the inmates eat. She complains stating that the fact that they had broken the law does not mean that they had to suffer the conditions which they were going through. One of the points stated in the book is where she explains the manner in which one of the inmates wakes up in tattered clothes as he walks around the cellblock. This was one issue I found very disturbing as the welfare of inmates was ignored even after guards looking at him and giving a scornful laugh.
Another key point that I noted explained in the book was that of drugs in prison. In the prisons, many of the interpersonal relationships found to go well were those that involved drugs. She was able to find that there were different gangs, or rather territories as they referred to them. These were the major causes of the violent activities witnessed in prisons. Not only does Jennifer focus on the welfare of inmates but also looks at the condition of the correctional workers.
I was also interested because the book helped me understand that correctional workers are responsible for ensuring that when the inmates are done serving their time in prison; they can get back to society in a better and more productive condition (Wayne, 2002). With this, Jennifer focuses on the prison activities carried out to pass time. The most interesting factor that I found explained in the book was the amount of skills that lie in prison. I learned that were it not for the adamant efforts portrayed by the correctional officers, many of the people in prison go back to the street life and commit more crimes (Wayne, 2002).
Jennifer acknowledges the presence of workshops in the prison facility as one of the factors that could have led to a much better society. It was noted that many of the prisoners who made it out after the training programs went and found drug cartels. They were initiated back and while dealing drugs, could not put their skills into use. The book explains this in a manner which amazed me as it has always been a wonder how and why there are always second time offenders It is due to this that Jennifer decided to begin rehabilitation program in the prison to ensure that when people went out of the prison gates, they would not get back.
References
Wayne, J. (2002). Inside Rikers: Stories from the world’s largest penal colony. New York: McGraw Hill Publishers. Read More
Share:
Tags
Cite this document
(“Response of chapter 1 of inside rikers Essay Example | Topics and Well Written Essays - 500 words”, n.d.)
Response of chapter 1 of inside rikers Essay Example | Topics and Well Written Essays - 500 words. Retrieved from https://studentshare.org/miscellaneous/1591202-response-of-chapter-1-of-inside-rikers

“Response of Chapter 1 of Inside Rikers Essay Example | Topics and Well Written Essays - 500 Words”, n.d. https://studentshare.org/miscellaneous/1591202-response-of-chapter-1-of-inside-rikers.
Comments (0)
Click to create a comment or rate a document

CHECK THESE SAMPLES OF Response of chapter 1 of inside rikers

Role of grandparents in grandchildren lives

Response of chapter 2 of Inside Rikers

...Breaking stereotypes: Imprisonment and the job of corrections officers 2 April Introduction Chapter 3 of Inside Rikers, writtenby Jennifer Wynn, looks into the world of inmates and corrections officers (COs) at the Central Punitive Segregation Unit (CPSU). It is part of Wynn’s investigation of the reality in Rikers Island penal colony Solitary Imprisonment. For this chapter, she focuses on CPSU and the roles and responsibilities of COs. Her main point is that in prison, inmates and Cos alike and suffer from being separated from the rest of society. The two key points of this chapter are: solitary confinement reinforces...
2 Pages(500 words)Essay

...The imprisoned Poor May 23, Introduction In “Chapter 7: Strain of Two Cities,” in the book Inside Rikers by Jennifer Wynn, she depicted the differences between two cities. She used the term “two cities” as an allegory for the lives of the rich and the poor. She argued that society entrenches poverty, which results in greater criminality. What I find most interesting in this chapter is that Wynn believes that the rich have designed society to keep out the poor from tapping the former’s wealth. It is interesting because she is right to some extent. The poor’s conditions make them vulnerable to criminal attitudes and behaviors, although society can help change these internal factors while also changing the environment. Nevertheless... in...
2 Pages(500 words)Essay

... DATA FOR RECRUITMENT DATA FOR RECRUITMENT The need to recruit high quality is not something that is easily achieved. To do this, there is the need to apply a lot of data collection technicalities about the target population so that the eventual recruitment can meet the needs of the recruiter. Normally, there are three processes involved. The first of this is the data gathering process, where data as used in this context refers to raw information facts and statistics about the target population. At this stage, the number of people under consideration is often larger, as well as the data that will be gathered. For academic purposes, there are two major types of data that will be gathered, which have summarised in the table below... DATA FOR...
2 Pages(500 words)Assignment

... Self-diagnosis using Google The ability of Google searches finding correct diagnosis for 57 percent cases is impressive. This is quite a high success rate and it shows that Google search engine is a considerably reliable tool for diagnosis. I am impressed by these results because they vindicate the internet as an alternative diagnostic tool from the pessimism that draws from cyberchondria. Whereas the 43 percent cases that Google search did not find correct is a significant portion, it demonstrates the truth that diagnostic tools are not correct, absolutely, but they have error margins. Diagnoses by medical practitioners are also not correct, absolutely, and some conditions are misdiagnosed or are not diagnosed at all... Self-diagnosis using ...
2 Pages(500 words)Essay

... Sociology Basically, the need for food rather than being social is biological. However, the society and community at largeshapes and determines what we consume and the meaning we often attach to the food. Personally, I love Chinese food. My love stems from the fact that Chinese food has multiple flavours. In the United States, Chinese food has been Americanised in order to appear as if it belongs to Americans. This assimilation has led to a lot of American people accepting Chinese food as their own rather than being Chinese. Chinese food is taken to be family oriented, convenient and inexpensive on the social level. Both the Chinese and American cultures are family oriented in addition to being a social gathering. Americans have... Sociology ...
1 Pages(250 words)Coursework

...Chapter four reading response Question Reading the assignment was exciting, particularly, I learnt the following two interesting pieces of new information: the innermost value of monuments and arts as compared to the physical or aesthetic value and the historical origins of engineering expressions in relation to religion. Question 2: I responded positively to the Lion Capital Sarnath Uttah Pradesh India of the Maurya Period and Alexander the Great with Amun Horns. This is give that, they both signify the underlying power and devotion for a collective course, for example, Alexander fought for the conquest of Egypt whereas Ashoka fought for power and control in India in addition to devotion in Buddhism and...
1 Pages(250 words)Assignment

...CHAPTER 6 READING RESPONSE Throughout my reading assignment of chapter six, I gathered quite a lot of new knowledge.However, two pieces of information were outstanding. Firstly, I got to understand how the ancient societies represented their religious beliefs through art. It served as a way of commemorating important events as well as acknowledging their understanding of nature and natural phenomenon. Secondly, art was a significant tool of generational remembrance of political events characterized by conquests and political wars. The two works of art that I responded to most positively were the bronze figure of Siva and the Amber Necklaces of the Eastern Asia. For instance, the bronze...
1 Pages(250 words)Assignment

...Chapter Thirteen Reading Response My reading of chapter thirteen enlightened me on how art can be used to create emotional experiences in an abstract setting. The entire chapter was interesting; however, two things stood out. Firstly, I got to learn that art can be used in abstraction. Secondly, I got to understand that art can be used in realism as well. The two works of art I responded to most positively were AIDS Memorial Quilt in San Francisco and Le Corbusier’s ‘Notre-Dame-Du-Haut’. Both pieces of art are emotionally driven and capture emotions of the audience. For instance, the AIDS Memorial Quilt depicts a solemn commemoration of AIDS victims; a celebration of...
1 Pages(250 words)Assignment
sponsored ads
Save Your Time for More Important Things
Let us write or edit the essay on your topic "Response of chapter 1 of inside rikers" with a personal 20% discount.
GRAB THE BEST PAPER

Let us find you another Essay on topic Response of chapter 1 of inside rikers for FREE!