Comments (0)
Add to wishlistDelete from wishlist
Cite this document
Summary
The AFN (Additional fund/financing requirement) computed under the firm’s internal model is less as compared with that computed under the percentage-sales method. This is because under the firm’s model, we did not differentiate as between items that are acquired or incurred…
Download full paperFile format: .doc, available for editing
HIDE THIS PAPERGRAB THE BEST PAPER97.9% of users find it useful 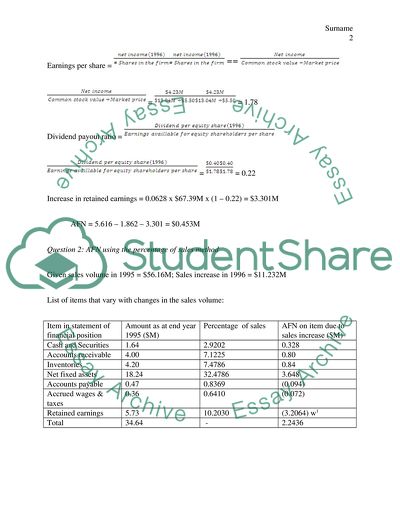 Download file to see previous pages the projected ratios provided by the executive management of the firm vary as between the ratios projected as calculated from the historical information in the firm’s books of accounts e.g. the profit margin provided as 6.1% against the computed 6.28% figure and the earnings per share ratio provided as 1.06% against the computed figure of 1.78%. This has an imbalance effect amounting to $0.18M on the pro forma balance sheet of the firm.
a) The proportionality test holds it is true that total assets increase in the same ratio, as it is evident in the data provided. The total assets in the year 1991 are 12m$ that when compared with the sales for the same year it is realized that it is half the sales, which implies that sales for the same year is 24m$. Therefore, the proportionality ratio is two. Taking the sales for the year 1992 which is 28.8m $ compared to total assets which is 14.4m $ it implies the same ratio has been maintained. Checking the other sales for the other three subsequent years compared to the total assets it can be summarized from the data the financial increment in assets is two per dollar. The graph below show a straight line graph implying an equal proportionality in the total assets and sales. From the graph, an equation is derived y=2x meaning that for every total asset there is twice sales made.
From the regression analysis the proportionality test holds but not with the same ratio. This can be witnessed from the graph above. The financial increment ratio is approximately 1.4m per dollar. For any data to be directly proportionally with an exact ratio, the resultant graph always bears a straight line.
c) The later situation holds for most companies or firms because the first condition assumes other financial factors. It is only in a perfect condition that firms’ sales will perfectly be proportional to the total sales in every financial year. Its implication if one uses the percentage of sales method is that sales compared to assets will ...Download file to see next pagesRead More
Share:
Tags
Cite this document
(“Finance study case Example | Topics and Well Written Essays - 1750 words”, n.d.)
Retrieved from https://studentshare.org/miscellaneous/1590313-finance-study-case

Justine could either claim under “like work,” “work rated as equivalent,” or “work of equal value.” A claim under the “like work” provision of the Equal Pay Act 1970 is laid down in s 1(2...
9 Pages(2250 words)Case Study
sponsored ads
Save Your Time for More Important Things
Let us write or edit the case study on your topic "Finance study case" with a personal 20% discount.
GRAB THE BEST PAPER

Let us find you another Case Study on topic Finance study case for FREE!