Comments (0)
Add to wishlistDelete from wishlist
Cite this document
Summary
In a study that used open responses, it was noted that oral interviews bring a deeper understanding of needed concepts (Nehm & Sconfeld, Dec 2008). Even the minute details of the learner can be learnt during the…
Download full paperFile format: .doc, available for editing
HIDE THIS PAPERGRAB THE BEST PAPER97.6% of users find it useful 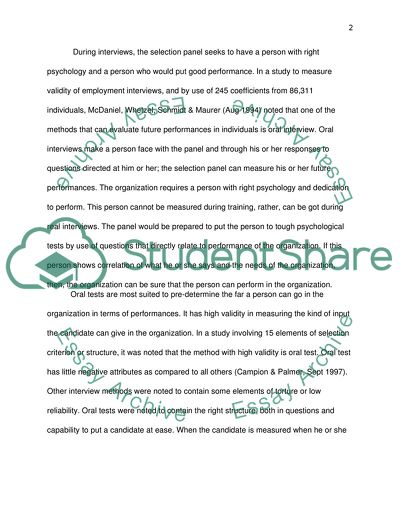 Oral interviews in Human Resource Selection Oral interview selection method is a most preferred method. In a study that used open responses, it was noted that oral interviews bring a deeper understanding of needed concepts (Nehm & Sconfeld, Dec 2008). Even the minute details of the learner can be learnt during the interview process. This research study utilized science educators and tried to correlate the importance attached to natural selection. The natural selection method is most preferred because it gives direct feedback (Nehm & Schonfeld, Dec 2008). While it was noted that there was needed reviewing how the CINS and ORI types of natural responses were used in selection, there was little that was said about oral interviews as needing change. This is because the validity of oral interviews is high. The selection panel is sure to get the right person, rather than using other methods which ultimately may give a different person or character contrary to how he or she was described.
In interview sessions, one of the most evaluated things is the consistency. If the candidate cannot correlate what he or she described in his or her application letter during the oral interviews, then, the person is not qualified. According to Conway, Jako and Goodman (Oct 1995), the reliability of oral interviews is very high. This person is asked questions that directly relate to what he or she has described in the application letter and accompanying documents. This research was a meta-analysis using 49 coefficient alphas and 111 reliability coefficients emanating from selection interviews. From all the methods used for selection, it was noted that high reliability was on oral interviews. It is most preferred because at the end of the selection process, the panel is sure that it has got the right mind and behavior for the intended work.
During interviews, the selection panel seeks to have a person with right psychology and a person who would put good performance. In a study to measure validity of employment interviews, and by use of 245 coefficients from 86,311 individuals, McDaniel, Whetzel, Schmidt & Maurer (Aug 1994) noted that one of the methods that can evaluate future performances in individuals is oral interview. Oral interviews make a person face with the panel and through his or her responses to questions directed at him or her; the selection panel can measure his or her future performances. The organization requires a person with right psychology and dedication to perform. This person cannot be measured during training, rather, can be got during real interviews. The panel would be prepared to put the person to tough psychological tests by use of questions that directly relate to performance of the organization. If this person shows correlation of what he or she says and the needs of the organization, then, the organization can be sure that the person can perform in the organization.
Oral tests are most suited to pre-determine the far a person can go in the organization in terms of performances. It has high validity in measuring the kind of input the candidate can give in the organization. In a study involving 15 elements of selection criterion or structure, it was noted that the method with high validity is oral test. Oral test has little negative attributes as compared to all others (Campion & Palmer, Sept 1997). Other interview methods were noted to contain some elements of torture or low reliability. Oral tests were noted to contain the right structure, both in questions and capability to put a candidate at ease. When the candidate is measured when he or she is at ease, he or she is capable of putting out all his or her capability, and since the panel would be evaluating this, his or her performance would be noted.
Recommendation to improve validity
While oral interviews are highly favored for their high validity, some deviate from the core purpose of the interview. So as to increase validity, all questions and oral tests should be issue- based. That is, the questions should be about performance and not questions that can scare the interviewee. It is possible for the interviewee to panic if he or she is asked questions out of his or her scope, either in education or performance. Oral interviews should not be used as intimidation tools. In a number of times when the organization already has a preferred candidate, other candidates are intimidated in the course of the selection process by use of questions out of their scope and giving statement that generally shows that the candidate has not qualified.
Oral interviews should always be used as a way of creating good rapport between the selection panel and the candidate. For example, the candidate should be told at the end of the interview that if he or she fails, there are possibilities of him or her being contacted later without applying if another opportunity opens up. The candidate should not be victimized for non-issues during the interview. For example, if he or she has not attained the recommended dress code, it should not be shown during oral interviews. It should only be a matter of consideration during evaluation of the candidates.
References
Conway, J.M., Robert, A. & Goodman, D.F. (Oct 1995). “A meta-analysis of interrater and internal consistency reliability of selection interviews.” APA PsycNet Journal, 80(5), 565-579.
Campion, M.A. & Palmer, D.K. (Sept 1997). “A review of structure in the selection interview.” Journal of Personnel Psychology, 50(3), 655-702.
Nehm, R. H & Schonfeld, R. S. (Dec 2008). “Measuring knowledge of natural selection: A comparison of the CINS, an open-response instrument, and an oral interview.” Journal of research in science training, 45(10), 1131-1160.
McDaniel, M.A., Whetzel, D.L, Schmidt, F.L. & Maurer, S.D. (Aug 1994). “The validity of employment interviews: A comprehensive review and meta-analysis.” Journal of applied psychology, 79(4), 599-616. Read More
Share:
Tags
Cite this document
(“Human Resources/The students chosen candidate screening/selection Research Paper”, n.d.)
Human Resources/The students chosen candidate screening/selection Research Paper. Retrieved from https://studentshare.org/miscellaneous/1590232-human-resourcesthe-students-chosen-candidate-screeningselection-method-is-reference-checking-and-the-validity-of-that-method

...? Assignment Byline According to the data, the new r value based on the added information would be 0.75. The new correlation would be 0.5625. Even though the correlation is very strong, due to the possibility of the information not being valid because of the p test, I would likely not use this test. It is important to have accurate data and if this test cannot yield accuracy, it is better not to use it. The selection methods like the cognitive test are used as predictors for certain desired traits in an employee. If a correlation value is near 1 or -1 and the p value is less than .05, it is likely that the results gleaned from the selection method are accurate in terms of predicting how an employee will do in certain areas... be used for...
2 Pages(500 words)Assignment

...important tools in the human resources practices”. Employee Selection Process There is a difference between recruitment and selection processes. Recruitment is a process in which a company identifies vacant jobs and publishes them in the newspapers and in internal vacancy lists in order to hire suitable employees for those positions. In job advertisements, a company also specifies the required set of skills and qualifications in order to let the candidates know about the skills required for a job. Claude (2010) states, “Employee recruitment forms a major part of an organization's overall resourcing strategies”. In the process of employee...
6 Pages(1500 words)Term Paper

...Teaching Method The teacher relationship is essentially important and may be defined as a speaker-listener relationship. The teacher acts as the 'speaker' and the student is supposed to be a 'listener'. The teacher tells the reality but does not show its existence. The teacher conveys a couple of words and students take it as sensible and important information without knowing the evidence of its actuality. The responsibility of a teacher thus, is to make them memorize specific figures, sentences and theories. They are developing a situation where a student does not actually learn but memorize things. He does not experience but take inspirations. He does not try to understand but believe in what the teacher says. The student knows... that...
3 Pages(750 words)Essay

...Method Participants The population that was eligible to participate in this study were female and male jurors who had participated in at least one trial in the last four years. The 400 participants in this study's sample were recruited using a convenient sampling technique that included a newspaper advertisement and notices on courtroom bulletin boards asking potential participants to contact the primary investigator. There were 200 females and 200 males in the sample, with ages ranging from 21 to 75 years, (mean = 45.24, SD = 7.31). The ethnic composition of the sample was skewed towards Anglo-Americans (73%), with a representation of also African-American (12%), Hispanic-American (7%), Asian-American (5%), and American...
2 Pages(500 words)Essay

...? Hypothesis Students who spend most of their time in social media depict a general dismal performance in their academics. Research Method Experimental research method form the basis of understanding the above research problem. The independent variable is students’ involvement in social media while the dependent variable is their academic performance. Understandably, different high schools have different policies regarding students’ usage of cell phones, tablets, or other internet enabled gadgets within the school compound. Therefore, the research will begin by selecting at least four five different 6 different schools, three of which...
2 Pages(500 words)Essay

..., as the participants are time (Durai, 2010). However, there are various pitfalls that are associated with this method that include that the test is likely to differ in results because of race and gender than any other type of test administers. Lastly, the method is time-consuming in case the test is purchased off- the- shelf. Reference Durai, P. (2010). Human resource management. Chennai: Pearson.... Employee selection method Affiliation Employee selection method Employee selection is vital for the organization because it ensures that the employees selected or recruited have the right skills to work and to fulfill the obligations...
1 Pages(250 words)Essay

...Method: Method Participants The participants of the research study will be from The Ark which is located in the South East region of Miami. The Ark University is a public institution with a total population of approximately 24, 500 students. A group of 60 educational graduates students, 30 male and 30 female. These students will participate in the experimental study to assess the impact of online classes and traditional classes. The participants will be informed that the experiment will measure how they captured concepts of the materials used in the class. The students to participate in the study will be asked to volunteer. The...
4 Pages(1000 words)Essay

...for the company is not specific it its cash budget line. It closely refers to the uncollectable receivables. Variable factors in this context emanate from economic features among them limited sponsorship and thus resulting in wrong accounts (Gazely & Lambert, 2006). From the budget, the company is setting aside a budget for 140 bikes inclusive of labour costs. It is appropriate to cut down on the level of production of extra parts in the inventory. The viability of any business can be measured by how the company effectively utilizes its resources while plummeting unnecessary costs hence Competition Bikes Inc. should strive to avert extra discretionary costs. Activity-Based Costing Vs. Traditional...
2 Pages(500 words)Research Paper
sponsored ads
Save Your Time for More Important Things
Let us write or edit the research paper on your topic "Human Resources/The students chosen candidate screening/selection method is reference checking and the validity of that method" with a personal 20% discount.
GRAB THE BEST PAPER

Let us find you another Research Paper on topic Human Resources/The students chosen candidate screening/selection method is reference checking and the validity of that method for FREE!