Comments (0)
Add to wishlistDelete from wishlist
Cite this document
Summary
This was in a bid to ensure that the owners of those software and digital media make a profit from their work. This copyright infringement laws provide legal actions…
Download full paperFile format: .doc, available for editing
HIDE THIS PAPERGRAB THE BEST PAPER91.5% of users find it useful 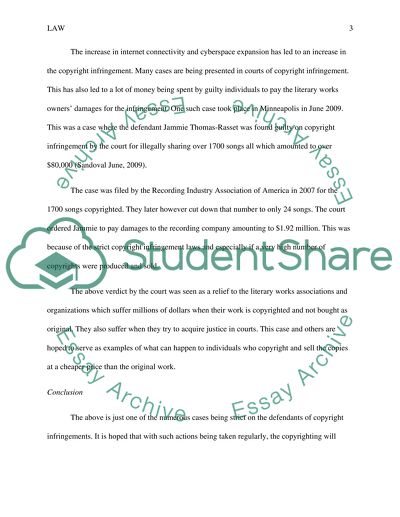 Copyrights Affiliation: Introduction Copyright infringement laws were formed and enforced in a bid to stop copyrighting of software and digital media. This was in a bid to ensure that the owners of those software and digital media make a profit from their work. This copyright infringement laws provide legal actions that will be taken if copyright infringement occurs including the damages to pay (Smith 2007).
In the question provided, the first scenario where Maruta burns copies of movies in blank DVDs is an infringement of the copyright laws and can be charged. This is according to the Copyright Act of 1976 which prohibits making of unauthorized tangible copies of works. The law was later reviewed to include even works found in the cyberspace (Smith 2007). This law can therefore be used to charge Maruta.
If Maruta is found guilty of copyright infringement, he may have to pay damages of over $250,000. This is the minimum damages paid in case the law against copyrighting is infringed. This may however vary depending on the duration of copyright and the average number of copies sold. If they are found to be high, then the damages will increase and may go up to millions of dollars to be paid to the owner of the copyrighted material.
The second scenario cannot go to court and be charged with copyright infringement since he used the copied material to teach students. This is allowed in the Copyright Act section 106 which allows fair use of the copyrighted material in different situations and teaching is one of the situations. This therefore means that Maruta in this scenario was not acting against the law and hence cannot be charged or even be required to pay damages.
The increase in internet connectivity and cyberspace expansion has led to an increase in the copyright infringement. Many cases are being presented in courts of copyright infringement. This has also led to a lot of money being spent by guilty individuals to pay the literary works owners’ damages for the infringement. One such case took place in Minneapolis in June 2009. This was a case where the defendant Jammie Thomas-Rasset was found guilty on copyright infringement by the court for illegally sharing over 1700 songs all which amounted to over $80,000 (Sandoval June, 2009).
The case was filed by the Recording Industry Association of America in 2007 for the 1700 songs copyrighted. They later however cut down that number to only 24 songs. The court ordered Jammie to pay damages to the recording company amounting to $1.92 million. This was because of the strict copyright infringement laws and especially if a very high number of copyrights were produced and sold.
The above verdict by the court was seen as a relief to the literary works associations and organizations which suffer millions of dollars when their work is copyrighted and not bought as original. They also suffer when they try to acquire justice in courts. This case and others are hoped to serve as examples of what can happen to individuals who copyright and sell the copies at a cheaper price than the original work.
Conclusion
The above is just one of the numerous cases being strict on the defendants of copyright infringements. It is hoped that with such actions being taken regularly, the copyrighting will seize and the authors and actors of the literary works protected under the copyrights Act will start enjoying the fruits of their labor fully.
References
Sandoval, G. (June, 2009). “Court orders Jammie Thomas to pay RIAA $1.92 million.” CNET News. Retrieved from http://news.cnet.com/8301-1023_3-10268199-93.html
Smith, G. (2007). Internet law and regulation. California: Sweet & Maxwell. Read More
Share:
Tags
Cite this document
(“Love - Law-Copyrights Essay Example | Topics and Well Written Essays - 500 words”, n.d.)
Love - Law-Copyrights Essay Example | Topics and Well Written Essays - 500 words. Retrieved from https://studentshare.org/miscellaneous/1589848-love-law-copyrights

CHECK THESE SAMPLES OF Love - Law-Copyrights

Ways in which Music Copyrights are exploited

...industry had to undergo rapid changes as new revenue streams were opened up in relationship to technology. A host of problems had to be solved in order to support the rights attributed to publishing a piece of music (Harrison 2011: xv). One of the solutions came in the form of collection societies, but because fees reduced the received royalties, solutions are emerging lowering the cost of using agencies towards getting the royalties that are owed. Through an examination of the music industry and copyright law, an understanding of how the system works can be achieved. 2. History of Music Publishing and Rights The early development of the phonograph and the broadcast industry near the beginning of the...
5 Pages(1250 words)Essay

...with incoherent realms of texts and images. It only serves intellectual curiosity to question the construction of contemporary copyright, which is taken as a law, universally recognized with moral absoluteness akin to the biblical right to life, or as the inherent natural law of gravity (Drahos, 1998, p. 20). In actual sense, it boarders neither. Rather, it is a tenuously forged term, endlessly revised with defective incarnations that bound and justifies infringements on almost everything from failure to pay royalties by Girl Scouts for the campfire songs they sing to the research violations on patented human genes (Scherer, 2002). Like a birthright revered in every corner of a writing...
7 Pages(1750 words)Essay

... Morality of Illegal Downloading Introduction Downloading music is illegal. It is illegal because the music that being downloaded are subjected to copyright laws, therefore the musicians and the recording companies own the exclusive right to use and license these songs and albums. Therefore, since people who download music over the Internet are taking licensed property without paying for it, it is stealing. Some people might not see it a stealing, as it is taking something that is relatively intangible, as opposed to actually taking a piece of solid property from the rightful owner, but it is stealing, nonetheless because it is taking something of value without paying for it. It is also immoral. Or is it? There is not a doubt... that how a...
6 Pages(1500 words)Essay

...for copyright protection. Such proof can only be through a demonstrable non-utilitarian purpose that the accessory serves. The fashion design industry it is common imitations of designs with different trademarks. The owners of the original designs can only file litigation if their trade marks if they find an imitation of their designs. Considering that copyright laws do not protect them, litigation on any of the imitated designs would fail unless the owner proves that indeed theirs had a unique non-utilitarian function to warrant copyright protection. It is hence paramount to explain through this research paper the reason for such unprotection and why there are few...
10 Pages(2500 words)Research Paper

...COPYRIGHT, DOMAIN REGISTRATION AND TRADEMARK LAW FOR THE INTERNET Copy rights Infringement Brief Analysis of the Case. As in any human Endeavour, law regulates cyberspace in the same manner with copyright, defamation, and obscenity stipulations designed to control an expected return.1 Thus the underlying principle is accrued benefits or its denial. Wanda is an Internet Service Provider registered in United Kingdom (UK). It is obvious that it is governed by laws in the United Kingdom as related to trade mark, copy rights and domain name registrations. The growth of knowledge economy has led to increased usage and abusage of the rights of individuals and...
20 Pages(5000 words)Case Study

...Running Head: critique Business Law of the of the of the of article: Beware of your firm’s social media usage. Whatever you put on it, someone will have a copy. And litigators love that. Date of publication: February 2011 Author: Scott Sinder Resource: Leader’s Edge Magazine Situation: Use and popularity of social media and networking is increasing by leaps and bounds and the immediate effect which is visible is the legal implications of its usage on business practices. From copyright to intellectual properties and from confidentiality to contractual agreements, social media has raised the brows of ethical and legal torchbearers in this regard. How it relates to business...
2 Pages(500 words)Essay

...FAMILY LAW Family law is a set of laws, procedure and rules which govern family-related matters and agencies, ities and groups involved in the outcome of private disputes as well as social decisions involving family law (Luppino & Miller 2011 p. 216). With regards to a divorce, the law is generally divided into two parts. The first section is concerned with the grounds for divorce. The second section on the other hand entails the guidelines on how the courts deal with property and financial issues. A divorce causes severance of marriage ties as well as brings changes in the property relations and the division of marital assets between the spouses. Section...
9 Pages(2250 words)Essay

...Love The of love is ever intriguing when it comes to the human race. What is love? Love is an emotion. It represents a feeling of personal attachment and strong affection towards something. As a virtue, love shows compassion, kindness, and affection. This paper will look at the theme of love and how it gets displayed in; the memoir, ‘ninety days’ by Bill Clegg, ‘this our youth’, a play by Kenneth Lonergan, ‘sex without love’, a poem by Sharon Old, and in the ‘All-American’ poem by Matthew Dickman. ‘Ninety days’ is a memoir by Bill Clegg. It focuses on Clegg’s road towards recovery from cocaine and alcohol at the age of...
2 Pages(500 words)Essay

...Patents and Copyrights Copyright and patent protection encourages innovations by individuals and companies alike. This is because they are able to recover production and development cost they may have incurred. In the absence of these intellectual property laws, there would be fewer innovations since those individuals would not recoup their money (Mankiw, 2011). For example, if a company like Google develops a new software and it does not obtain a patent for it, other companies may exploit Google by selling the software and profiting from it. In this case, Google will lose money since it would not have market power. In such a society, innovation would be stifled. In the scenario mentioned...
1 Pages(250 words)Essay

... The Definition and Forms of Love. Love is the noun referring to a variety of feelings, emotions, attitudes and s which range from affection to pleasures. The noun may be used in reference to a very strong emotional and personal attraction or the actions of compassion one shows to others, the self or animals. Love also refers to the virtue of being affectionate, kind and companionate or concerned about the welfare of other people. The emotions are usually special, complicated and not easily understandable; most people have the belief that the feeling of love takes place in ones heart but it actually occurs in ones brain. This is because the generation and interpretation of the various chemicals substances signaling our feeling... and...
2 Pages(500 words)Essay
sponsored ads
Save Your Time for More Important Things
Let us write or edit the essay on your topic "Love - Law-Copyrights" with a personal 20% discount.
GRAB THE BEST PAPER

Let us find you another Essay on topic Love - Law-Copyrights for FREE!