Comments (0)
Add to wishlistDelete from wishlist
Cite this document
Summary
This process can be conducted in either a continuous or discontinuous manner. That the latter is the basis of batch distillation. In batch distillation, the apparatus for use are loaded with the…
Download full paperFile format: .doc, available for editing
HIDE THIS PAPERGRAB THE BEST PAPER96.5% of users find it useful 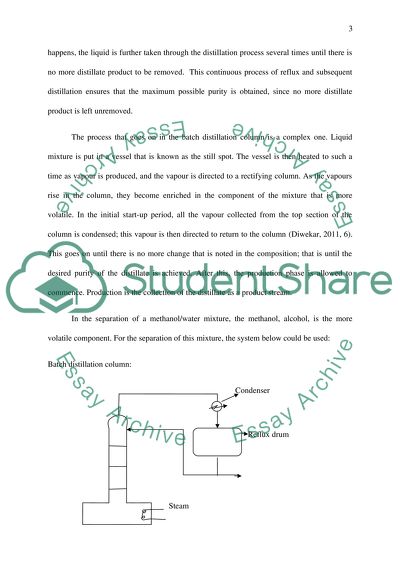 BATCH DISTILLATION COLUMN BATCH DISTILLATION COLUMN Summary Distillation is a process that is vital in the separation of liquid mixtures. This process can be conducted in either a continuous or discontinuous manner. That the latter is the basis of batch distillation. In batch distillation, the apparatus for use are loaded with the mixture to be separated at the start-up time. Different fractions of the mixture are then taken out one after another that is in batches, thus giving this process its name.
The batch operation is divided into two periods, which describe the entire process. These are; the start-up period, and the production period. A single batch column is able to separate a multi-component mixture in a single operation, to its various components. During the start-up period, the column is adjusted in a way that ensures the distillate produced will be of desired purity (Jana, 2008, 145). The production period is, in contrast, the part of the process during which the product is withdrawn from the column.
Operation of the batch distillation column takes place in four ways. Constant reflux ratio, total reflux, optimal ratio, and constant distillate composition are the methods used in operating batch distillation column. The method of operation of the batch distillation column is dependent on the type of mixture that is being separated. In the separation of the methanol/water mixture for instance, total reflux method could be appropriately used.
In total reflux, the batch process is left alone to approach steady state before the withdrawal of the distillate product is allowed to start. In order to now achieve steady state, overhead vapours are condensed and collected in the condenser-reflux drum system (Diwekar, 2011, 5). All the liquid that has been condensed is directed to return to the column. When this happens, the liquid is further taken through the distillation process several times until there is no more distillate product to be removed. This continuous process of reflux and subsequent distillation ensures that the maximum possible purity is obtained, since no more distillate product is left unremoved.
The process that goes on in the batch distillation column is a complex one. Liquid mixture is put in a vessel that is known as the still spot. The vessel is then heated to such a time as vapour is produced, and the vapour is directed to a rectifying column. As the vapours rise in the column, they become enriched in the component of the mixture that is more volatile. In the initial start-up period, all the vapour collected from the top section of the column is condensed; this vapour is then directed to return to the column (Diwekar, 2011, 6). This goes on until there is no more change that is noted in the composition; that is until the desired purity of the distillate is achieved. After this, the production phase is allowed to commence. Production is the collection of the distillate as a product stream.
In the separation of a methanol/water mixture, the methanol, alcohol, is the more volatile component. For the separation of this mixture, the system below could be used:
Batch distillation column:
Condenser
Reflux drum
Steam
Still spot condensate
Batch distillation is the preferred method of separation when there is the need to separate biochemicals, and high technology chemicals that are in small quantities. One unique feature of this method of separation is the flexibility of operation (Jana, 2008, 147). Each component will require its own column, and this method can be used for the separation of relatively pure components. Batch distillation has found use in pharmaceutical, food, biochemical, and fine chemistry industries.
References
Diwekar, U. (2011). Batch Distillation: Simulation, Optimal Design, and Control, Second
Edition. Boca Raton, FL: CRC Press.
Jana. (2008). Chemical Process Modelling & Computer Simulation. New Delhi: PHI Learning
Pvt. Ltd. Read More
Share:
Tags
Cite this document
(“Batch Distillation Column Assignment Example | Topics and Well Written Essays - 500 words”, n.d.)
Retrieved from https://studentshare.org/miscellaneous/1588834-batch-distillation-column

...in the course of traveling up the column. Moreover, the condenser (fractionating column) is packed with these materials purposely to help increase its surface area. This is based on the principle that whenever a solution gets distilled in fractions, it goes through various re-distillations that help increase the purity of the product at the end of the tunnel. As liquid gets heated, vapor starts rising. These vapors condense when they come into contact with the fractioning column cooler surfaces. Continued heating of the distillation liquid leads to the increase in the rise of the vapors. The condensed vapors within the fractioning...
4 Pages(1000 words)Lab Report

...This physics column shall explore on the physical properties of day to day materials that are linked with the movements of their components, either atoms or molecules. In particular, the study shall explore on the type of motion referred as “heat.” In addition, the column shall attempt to establish the factors that regulate transfer of heat from one substance to the other, especially when they are brought into thermal contact. Moreover, the column shall help us understand the relation that exists between heat and mechanical work. For example, is the heat content affected by any physical force? More significantly, is it possible to extract heat from a substance and apply it in a more...
3 Pages(750 words)Article

...?Insert of Faraday’s law: Ampere’s law Several thoughts always cross our minds whenwe see a light bulb illuminate the house in a chilly evening. The streets appear brighter during the night despite the surrounding darkness in the place where we might happen to be in. More fascinating occurrences often hallucinate our understanding with regard to how certain things operate. Even the most common things such as cell phones which we use in our everyday lives sometimes pose a lot of questions in our minds concerning how they actually operate. We have to charge our cell phones whenever they are exhausted of energy/power. This we have to do by using electricity and we wonder how electricity and the cell phones are related such that we... of...
4 Pages(1000 words)Essay

...Running Head: THE SIMPLEX METHOD – PIVOTS The Simplex Method: What is a pivot column, pivot row and pivot element? In the simplex method, how is a pivot column selected? A pivot row? A pivot element? Give examples of each. The simplex method, or simplex algorithm as it is also known, is an algorithm used for linear programming. Although simplices are not used in the method, it has been suggested that is operates on simplicial cones, hence the name. Pivot operations are a geometrical process that moves from a basic feasible solution to a second adjacent basic feasible solution. If you take a pivot element (non-zero) in a non-basic column, and then multiply the row that the pivot element is in by its reciprocal then you end... up with a...
1 Pages(250 words)Assignment

...Distillation Column Design Insert (s) Distillation Column Design Operational design considerations There are a number of operational design considerations that should be taken into consideration to ensure that the depropanizer distillation column is both effective and efficient. Generally the column primarily acts as a separator unit to recover propane from the mix of other heavier hydrocarbon components such as Butane during the refining process. In this regard, the depropanizer distillation column should be designed a way that operates within the ranger of the average total pressure...
4 Pages(1000 words)Assignment

...Chemical engineering distillation column Introduction Distillation is one of the physical processes for separating fluid mixtures. It has wide applications in industrial separation of organic compounds from themselves or from other elements or compounds. This paper discusses some of the properties of the distillation column for efficient operation. The paper explores a case to illustrate a test procedure for efficient functionality of a distillation column given limited time resource. The problem The problem involves provision of engineering support to a company’s ethanol production plant. The company’s operation has...
2 Pages(500 words)Essay

...HEAT TRANSFER Due HEAT TRANSFER Introduction A distillation column is a cylinder made of metal, normally talland fitted internally with horizontal plates, which have perforations. The perforated plates promote miscible liquids separation as they ascend in the cylinder in form of a vapor. They also separate air into oxygen and nitrogen; its principal components. In the distillation column, separation of air happens in its liquid rather than its gaseous state. Distillation, which is the separation of liquid or vapor mixture into its component fractions of desired purity by heat application or removal, takes place in a distillation...
4 Pages(1000 words)Essay

...Windows Batch Background information In windows, a batch file is a script file that contains a series of commands that are interpreted with the use of the command line interpreter. It may contain any command that the interpreter accepts at the command prompt and they get interpreted one after the other. Windows batch is applicable in all the Windows versions such as XP, Vista and Windows 7. Importance It is a powerful tool for carrying out repetitive tasks, if you are creating volumes of files, you do not need much workforce to realize your goals. Network and system administration is much easier for both individuals and organizations applying Windows batch in their...
2 Pages(500 words)Assignment

...PACKED DISTILLATION COLUMN of Affiliation Table of Contents Experimental Procedure 2 Feed supply 4 An interlock 4 The reflux divider which is electromagnetically-controlled 4 Shut-Down Procedure 5 Reference 6 Experimental Procedure The supply of mains electricity was switched on through the isolator on the control panel. This process was then followed by switching on and off the power located at the control panel. It was recommended to have both valve S and valve R in their open positions. Opening of the feed control valve followed to allow for a greater flow of the fluid. The valve that allows in the cooling water was opened and fixed to a value that was more than 18 on the initial rota meter. Switching...
2 Pages(500 words)Essay
sponsored ads
Save Your Time for More Important Things
Let us write or edit the assignment on your topic "Batch Distillation Column" with a personal 20% discount.
GRAB THE BEST PAPER

Let us find you another Assignment on topic Batch Distillation Column for FREE!