Comments (0)
Add to wishlistDelete from wishlist
Cite this document
Summary
Consequently, they explain that common law aiming at fire management is predicated on negligence rules. According to the European Forest…
Download full paperFile format: .doc, available for editing
HIDE THIS PAPERGRAB THE BEST PAPER93.5% of users find it useful 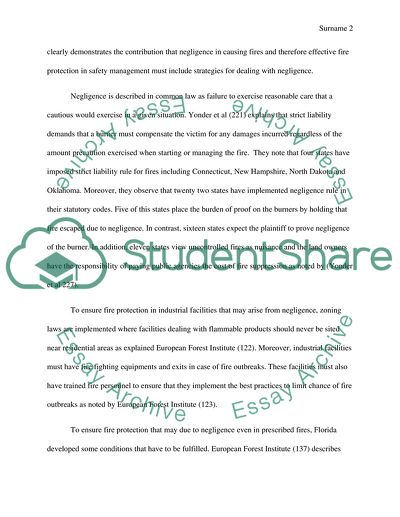 Fire Protection through Management of Negligence Yonder et al (218) s that prescribed burning is being continuously viewed as a useful but risky tool for land management and conversation. Consequently, they explain that common law aiming at fire management is predicated on negligence rules. According to the European Forest Institute (21), the knowledge about when, where and the reason why fires start is crucial in ensuring appropriate fire management and policy. The Institute argues that capability to comprehend and predict patterns of fire ignition is necessary in helping decision makers enhance fire prevention, detection and optimize the allocation of fire fighting resources.
Presently about 95% percent of the fires in Europe are caused directly or indirectly by human activities and behavior. Negligence in private, industrial and public sector contributes significantly to incidence of fire. European Forest Institute (22) observes that among all fires with known causes; 51 percent are started intentionally, 44 percent results from negligence or accident while only 5 percent had been caused by natural causes such as lighting. However, the European Forest Institute (22) notes that there are variations across countries with negligence and accidental causes accounting for between 10 to 98 percent of all fires. These figures statistics clearly demonstrates the contribution that negligence in causing fires and therefore effective fire protection in safety management must include strategies for dealing with negligence.
Negligence is described in common law as failure to exercise reasonable care that a cautious would exercise in a given situation. Yonder et al (221) explains that strict liability demands that a burner must compensate the victim for any damages incurred regardless of the amount precaution exercised when starting or managing the fire. They note that four states have imposed strict liability rule for fires including Connecticut, New Hampshire, North Dakota and Oklahoma. Moreover, they observe that twenty two states have implemented negligence rule in their statutory codes. Five of this states place the burden of proof on the burners by holding that fire escaped due to negligence. In contrast, sixteen states expect the plaintiff to prove negligence of the burner. In addition, eleven states view uncontrolled fires as nuisance and the land owners have the responsibility of paying public agencies the cost of fire suppression as noted by (Yonder et al 227).
To ensure fire protection in industrial facilities that may arise from negligence, zoning laws are implemented where facilities dealing with flammable products should never be sited near residential areas as explained European Forest Institute (122). Moreover, industrial facilities must have fire fighting equipments and exits in case of fire outbreaks. These facilities must also have trained fire personnel to ensure that they implement the best practices to limit chance of fire outbreaks as noted by European Forest Institute (123).
To ensure fire protection that may due to negligence even in prescribed fires, Florida developed some conditions that have to be fulfilled. European Forest Institute (137) describes that the law requires that all fires must be authorized by the local department of fire (DOF) before ignition. The permit outlines whether if the area that is to be burned is within a severe drought emergency which facilitates in planning for response in case of uncontrolled fire. FS 590.125 as noted by Yonder et al (225) requires that there must be adequate fire breaks around the area intended to be burned and adequate personnel and fire fighting equipments must be available in the site just in case the fire becomes uncontrollable. Furthermore, the law requires that someone must remain at the burn site until the fire is fully extinguished.
To further ensure fire protection through controlling negligence, several states require the presence of certified burn managers at the site of prescribed burning. This group helps to implement all precautionary measures to limit chances of the fire escaping to the neighboring property as explained by (Yonder et al 229). Moreover, to ensure that fires do not escape, some states calls for landowners to reduce excessive fuel loads which in turn reduces the possibility of wildfires.
In conclusion, negligence rules developed in cases involving fire are aimed at ensuring that all people either in the private, public and industrial sector exercise reasonable care otherwise they will meet all the costs caused by their negligence. Moreover, different states have come up with conditions that have to be fulfilled before starting a fire. Burn managers have been certified in numerous states to enhance fire protection by limiting negligence. Before starting a fire, one is required to ensure that they have adequate fire fighting equipments and personnel to assist in case the fire becomes uncontrollable. Industrial facilities are expected to have personnel trained in fire fighting and there is zoning to ensure that facilities that are prone to fire outbreak are located away from residential areas.
Work cited
European Forest Institute, Towards Integrated Fire Management-Outcomes of the European Project Fire Paradox 2010, web accessed on 15th February, 2012< http://www.efi.int/files/attachments/publications/efi_rr23.pdf> Yoder, J. et al., Economics and Prescribed Fire Law in the United States. Review of Agricultural Economics, Vol. 25 No. 1 (2003) web accessed on 15th February, 2012 Read More
Share:
Tags
Cite this document
(“Fire protection Essay Example | Topics and Well Written Essays - 500 words - 1”, n.d.)
Fire protection Essay Example | Topics and Well Written Essays - 500 words - 1. Retrieved from https://studentshare.org/miscellaneous/1588635-fire-protection

CHECK THESE SAMPLES OF Fire protection

... Fire Protection Beattie, Walter S. Handling Impairments to Fire Protection Systems. Professional safety, Vol. 53(10), 2008, pp. 60-63. Beattie (60) explains that most occurrences of industrial fires have been noted to happen when systems are impaired or out of use. Hence facilities that detect and protect fires always have to be installed so that in case of any occurrence, the fire will be easily contained. Though these facilities have been installed in a number of industrial places, disaster management bodies have recommended that the installation to be extended to residential apartments. It is also very important to train individuals to know how to use them in order to reduce damage in case of a fire emergence (Beattie 62... ). It will be...
16 Pages(4000 words)Research Paper

... Fire Protection Fire is among the most important yet risky phenomenon in the entire universe. Fire primarily refers to the burning or combustion process in which elements combine chemically with oxygen to produce smoke, heat, and light. There are many other definitions of fire, including that it is one of the four elements in alchemist. Different disciplines have different definition of fire. It thus follows that there are numerous paradigms of fire, including the physical, cultural, and biological. To understand fire, there is need to analyze the paradigms, which revolve around the origin of fire in eth living world, and the significance of fire to the human race. It is important however to note that these different paradigms... that...
15 Pages(3750 words)Research Paper

Human Trafficking in the UAE

...AQUEOUS FILM FORMING FOAM In Relation to Fire Fighting I. INTRODUCTION Fire Fighting, techniques and equipment used to extinguish fires andlimit the damage caused by them. Fire fighting consists of removing one or more of the three elements essential to combustion-fuel, heat, and oxygen-or of interrupting the combustion chain reaction. Commercial and industrial buildings usually have some sort of internal, or private, fire-protection system installed. Some industrial establishments even airports also maintain fire departments that are specially trained and equipped to fight aircraft fires. The local...
5 Pages(1250 words)Essay

...FIRE PROTECTION HYDRAULICS AND WATER SUPPLY Hydraulics is the branch of physics which study the mechanical properties of water and other liquids in motion with the application of these properties in engineering. Hydrodynamics is the study of the motion and action of water and other liquids. Hydrostatic is the balance of water and other liquids and the pressure exerted by them at rest. For all intents and purposes hydraulics (Greek: Hydro meaning water; Aulos meaning pipe), as it relates to the fire service is the study of the behaviour of water in motion or at rest. Water is the main fire-extinguishing medium used by the fire service because it is...
4 Pages(1000 words)Essay

...﻿Fire Protection Systems From man’s birth, Fire is taken as the symbol of life and its scattering red, blue and yellow shades make it a theme of motion, warmth and existence. This blessing of God can be turned into a great menace due to its burning nature. From centuries people became scared of its nature so they started its worship by thinking that it is the manifestation of Goddess anger. It is rightly said that “necessity is the mother of invention”, similarly the damages and distortions related to the fire turned people’s attention towards fire protection measures. Initially fire control was manual and simple but...
1 Pages(250 words)Admission/Application Essay

...not neglect installing the necessary fire protective devices in buildings and structures. In public buildings, such as the JB Firth Building, owners should be extra careful in installing furnishings or linings which can be said as “fuel load” to possible fires. Our report will cover the fire safety strategy, including conclusions and recommendations from our study with respect to the fire safety measures as incorporated in the plan. This will also evaluate whether these are in accordance with the Building Regulations 2000 on Fire Safety and other important legislations on fire safety and prevention. Also included in the...
10 Pages(2500 words)Essay

...Fire Protection Systems Number Fire protection systems are systems put in place to prevent/ mitigate the unwanted effects of fire such as loss of lives or damage to property (Duncan, 2001). Fire Alarm Systems A fire alarm system is an electric device which alerts building occupants through visual and audio mechanisms when there is smoke or fire. The alarm systems can be activated automatically such as from smoke detectors, heat detectors and water flow sensors or manually from a fire alarm pull station. Usually, the devices for manual fire alarm activation in a building...
7 Pages(1750 words)Research Paper
sponsored ads
Save Your Time for More Important Things
Let us write or edit the essay on your topic "Fire protection" with a personal 20% discount.
GRAB THE BEST PAPER

Let us find you another Essay on topic Fire protection for FREE!